While Apple's GarageBand is a very powerful and capable digital audio workstation in its own right, here's seven reasons why you might wish to see it as a stepping stone to Logic Pro X.

GarageBand is no doubt the main entry point into the DAW world for many users of Macs and Apple devices, and it’s a surprisingly capable application, despite its simple appearance. However, for a lot of intrepid musicians and producers there’ll come a time when they bump up against GB’s limits enough times to be ready to step up to its big brother, Logic—since GB Projects can be opened up directly in Logic with all elements intact, it’s kind of a no-brainer.

Despite the fact that GB really is Logic under the hood, with a simplified interface and pared-down feature set, there are a lot of cool features that Logic has to offer GB users who are ready to take the plunge. So what do you get for your $200? Well there are many, many additional capabilities in Logic, but here are just a few of the most significant differences/additions..

Probably the most obvious difference is the inclusion of a proper Mixer in Logic. Now of course you can mix in GarageBand, but the various components of a standard mixer are spread around—fader and pan in the track headers, plug-in access in the Smart Controls pane at the bottom (where you can only view/access one track at a a time), and only a couple of fixed send & return effect paths. Logic, of course, offers a standard Mixer display, with traditional Channel Strips, user-configurable routings and Aux channels, mix groups and VCA faders, and all the mixing options you’d expect from a top-of-the-line DAW. 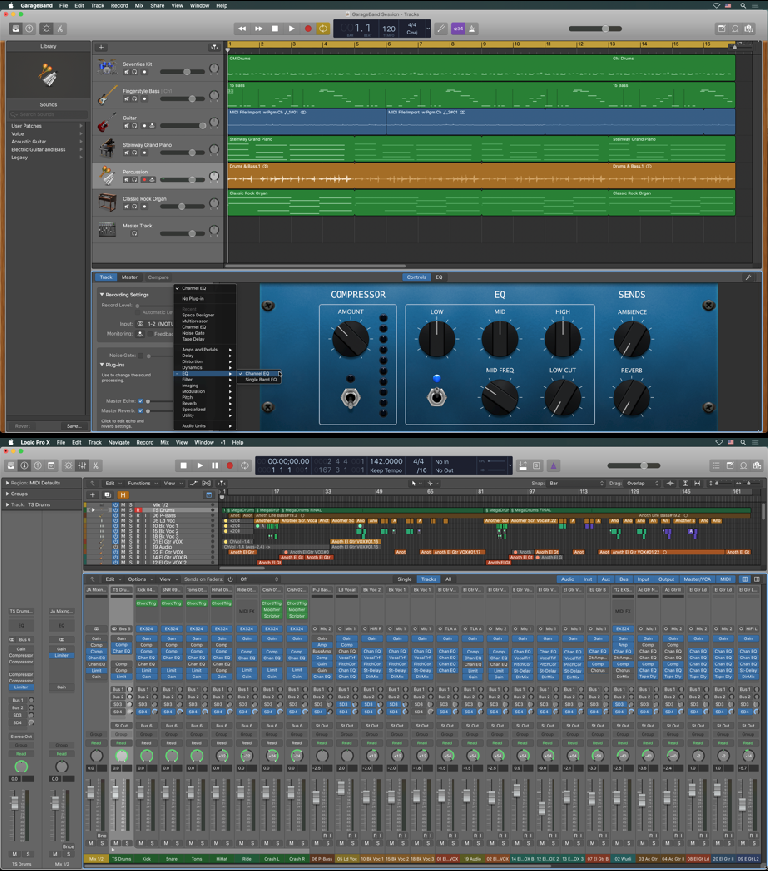 As I mentioned in the previous paragraph, in Logic Aux channel strips can be added and configured for a variety of purposes over and above the simple reverb and echo send & return options in GB. Routing certain tracks through an Aux allows for subgrouping (like all drum mics, all background vocals, etc), a standard technique for organizing a mix and processing a group of related tracks as a unit. There can be any number of send & return effects for parallel processing like reverb, and given the widespread practice of having multiple reverbs in a mix, applied selectively to different tracks, this will be a welcome addition for GB users who are beginning to get more adventurous in their mixes. But parallel processing can also be used for other effects—parallel compression is a popular technique, and extra Aux tracks can add flexibility to that application.

GarageBand has many of the same plug-ins that are found in Logic, but Logic has plenty to add. And for some plug-ins, the feature set is greatly reduced/simplified in the GB version—open up the Logic version and you’ll find many more control and options. A perfect example is the Compressor—GarageBand’s Compressor offers basic compression controls, but Logic’s version includes not only much more comprehensive options but multiple emulations of classic analog hardware compressors, each with its own distinct sound and response. 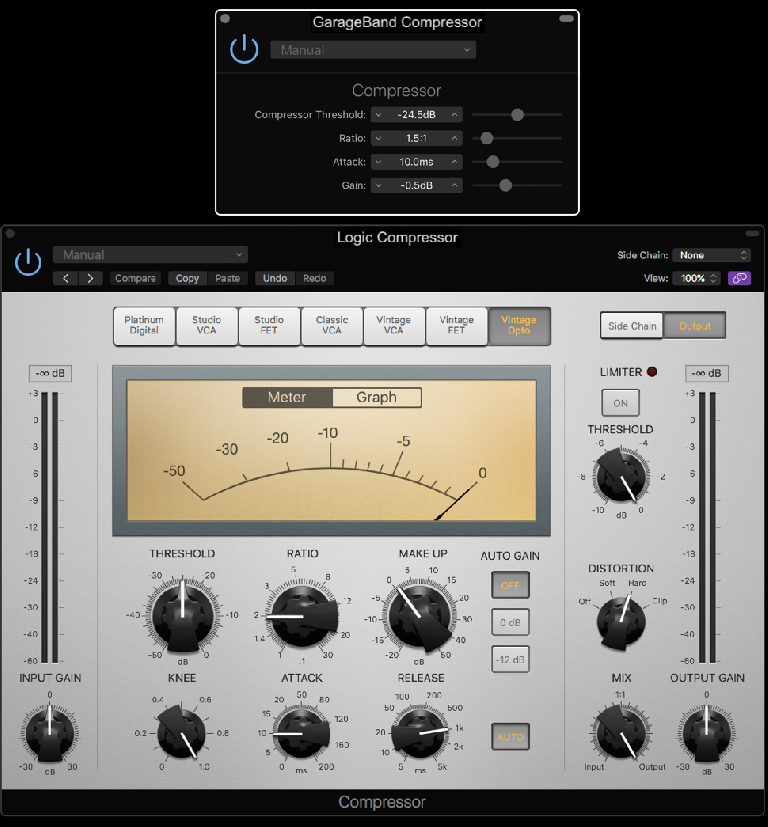 The same is true with EQ—both GB and Logic offer the standard Channel EQ, but Logic also has a collection of Vintage EQ models, providing more analog “character”. And Logic’s reverb choices and controls go way beyond what GB provides, just to name a few of the most common processing tools.

GarageBand uses many of Logic’s virtual Instruments under the hood when you load up patches from the Library, but for inveterate tweakers who like to customize the sounds and playability, each Instrument only provides a small set of adjustable parameters, via the associated Smart Control panels. But in Logic, Instrument plug-in windows open to reveal full programmability, from elaborate synth controls and mod routings, to user-configurable sampled sounds (via the EXS, the little sampler that could), to the high-end sound-design and tonal-shaping capabilities of Alchemy. For players/producers who want the sound and response of their virtual instruments to be just so, Logic is where they’ll want to be.

GarageBand does incorporate Logic’s Flex Time processing, which allows for time-stretching, audio quantization, and manual editing of individual note-timing—a pretty comprehensive feature set for a free DAW. But Logic also brings Flex Pitch to the party—this does for pitch what Flex Time does for timing. Flex Pitch allows for basic applications like pitch correction and transposition, but it’s real strength lies in its piano-roll editing display for audio tracks, where individual notes are analyzed, and their pitches detected and displayed as bars in a familiar MIDI-style piano-roll editor grid. 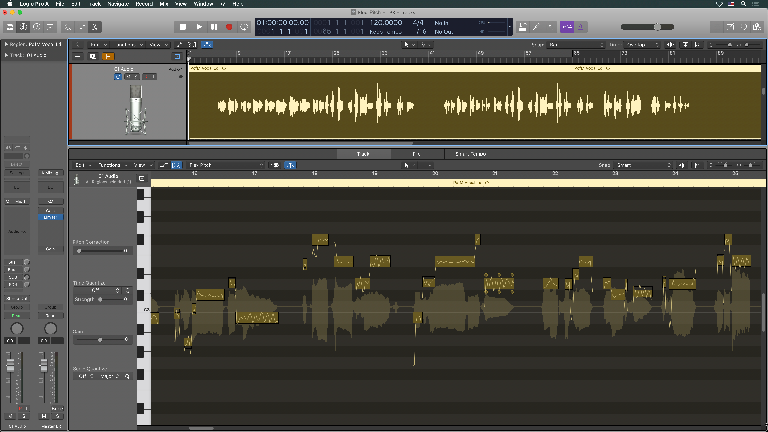 The notes can then be manually edited in a variety of ways—individual note transposition, pitch slides, vibrato strength, formant (tone)—for both corrective and creative purposes, including creating harmony parts from a single vocal track, or converting audio to MIDI for new tonal possibilities.

When it comes to Tempo and Meter, Logic has a lot more to offer than GB. For more adventurous composers/ songwriters Logic allows for Meter changes throughout a song—an option lacking in GB. But the big addition in Logic is Smart Tempo, which provides tools for both automatically or manually matching the Tempo of a Project to the tempo of an audio or MIDI recording, or matching the playback tempo of a recording to the Project Tempo. To be sure, GarageBand does include some of these features, like tempo changes and the option for audio to follow Project Tempo, but Smart Tempo goes much further, providing options for both automatic analysis/tempo-mapping and user control over matching tempo with problem files. Logic also incorporates multiple ways of beatmapping, which can come in handy for many workflows. 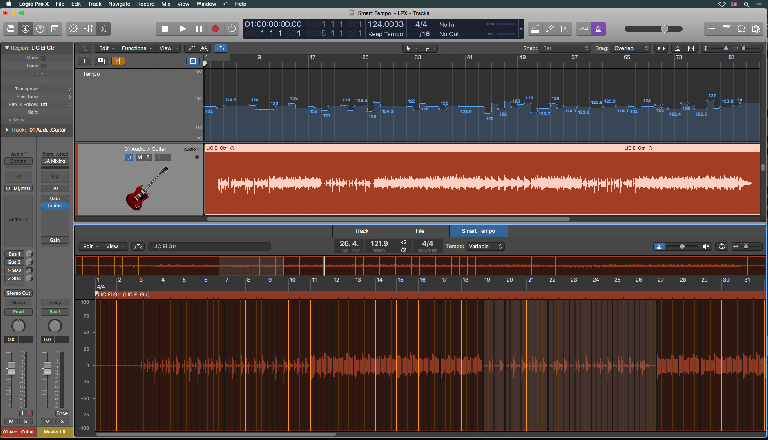 GarageBand does provide the option for processing in the master stereo output, but once again the GB versions of Logic’s mastering plug-ins are extremely simplified—particularly the Multipressor, Logic’s multiband mastering compressor. That may be fine for mixing/mastering newbies (assumedly the typical GB user), but for those ready to dig deeper into the art of mastering, to really take advantage of the power of those kinds of mastering processors the full control sets available in the Logic plug-ins are needed. Logic also includes comprehensive metering options for mastering, a must-have when preparing masters to be in compliance with the new loudness limits enforced by most streaming services. 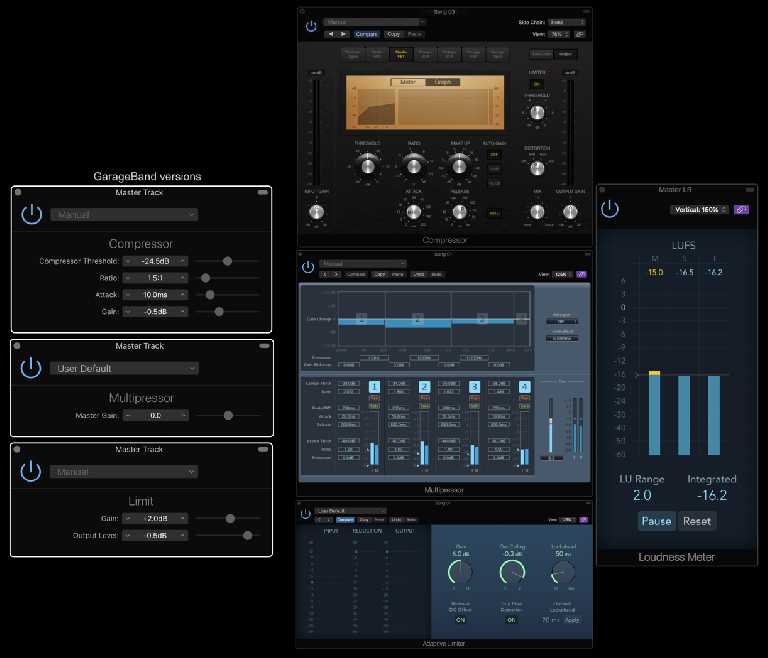 Of course there are many more Logic features and additions, in case this short list of the biggest and coolest doesn’t convince some GB users that’s it’s time to make the leap, but at some point I think the majority of GarageBand users will eventually decide to step up, and once they get past the initial learning curve for all those new toys I’m sure they won’t be disappointed.