Even if you're not an experienced keyboardist, Joe Albano has some pro tips to help you add keys to your guitar-heavy tracks for a different flavour.

Guitars and keyboards often inhabit very different musical styles, but even the most guitar-centric arrangement can often benefit from the contribution of a keyboard or two. Guitarists new to arranging and newly-minted producers of guitar-centric musical styles may not necessarily play keyboard, and might not be that comfortable adding in keyboard parts to fill out the instrumentation. Here are a few simple suggestions for integrating keyboard sounds and parts into guitar-based projects.

Obviously there’s no shortage of keyboard instruments to choose from, with everything between classic acoustic instruments to more cutting-edge synths easily available in one form or another. 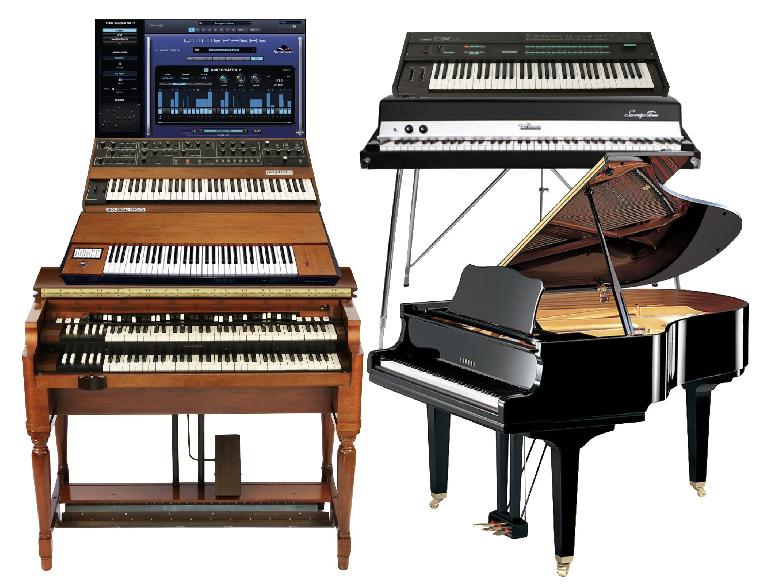 Of course the classic acoustic keyboards—piano, rhodes, clavinet, organ, etc—can always be called into service, even if they’re not meant to be a primary element in the musical arrangement. Pads and arpeggios might lean to synth tones, with classic filtered-sawtooth-type analog sounds for a pad, or the more percussive tones of FM and other digital methods of sound generation for more rhythmic keyboard parts.

For more modern tones, dense shifting textures from instruments like Omnisphere can provide the kind of keyboard sounds that are more of a cross between a musical part and a pure texture. And of course any keyboard sound can be pumped up with a little distortion or run through an amp sim, which can not only add some extra punch but also make it fit in better with the amplified guitar sounds that make up the main elements of the arrangement.

Your Pad Or Mine

The ever-popular pad is probably the first thing most guitarists think of when it comes to adding a little keyboard texture. Most people think of a pad as light steadily-held chords in the background—often more of a texture than a fully-realized musical part. A pad can be anything from a dark organ pedal tone that adds a little depth, to higher-pitched chords with a light synth/string sound that fills in space in the arrangement with a bit of high-end sheen. For a retro vibe, a classic bright buzzy synth brass/string sound could be employed—you know the one I mean. 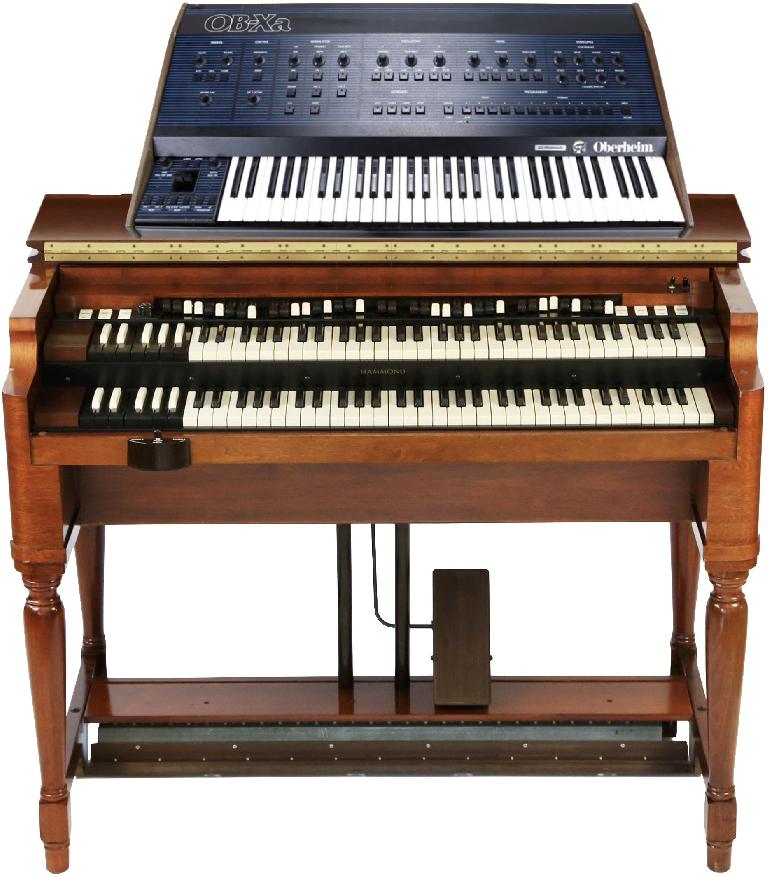 For a more active keyboard part, an arpeggiated keyboard figure might be a good choice. If the guitars are mostly big, ringing chords or a slow chunk, a rapid arpeggio bubbling along in the background can help propel the rhythm without taking over the arrangement and turning it into a “synth track”. For a less synthy tone, a more percussive sampled sound with a little edge could fit in musically with the guitar sounds and the overall guitar vibe, providing a rhythmic energy while still keeping the guitars front and center.

Rhythm Of The Keys

Arpeggiated parts often provide an even, regular rhythm that can easily function as a background pattern, but more traditional two-handed piano-style keyboard playing can also fit in well in a guitar-centric arrangement, provided the player’s rhythm complements the rhythm of the guitar parts. If the guitars are mostly longer, ringing chords, the keyboardist has more freedom to work out a suitable rhythm, taking his/her cue from the drum/percussion tracks and the overall rhythmic feel of the song. But if the guitars are playing busier chordal rhythms, or if there are finger-picked guitar parts, then the keyboard rhythm will have to be more carefully integrated into the musical arrangement.

It’s up the producer to stay on top of this—while studio pros can easily adapt to any musical style, many players tend to fall into their own rhythmic style even if it’s not an ideal match for the particular project, so if a keyboardist is brought in to add more than simple pads or doublings, the producer and artist should be prepared to provide some gentle guidance as to whether the keyboard’s rhythmic contribution is working, or clashing with the more prominent guitar parts.

The overall tonal character of a particular keyboard sound—whether it’s a bright metallic piano sound or a soft dark pad—will be a major factor in getting it to sit just right in the arrangement. In any guitar-heavy mix, the guitars will occupy most of the midrange, so it becomes important to carve out a little space for any keys added in, both to avoid muddying up dense crunchy/distorted guitar chords, and to be able to float over the mix, audible but often without really drawing attention to themselves.

For dense arrangements with lots of thick double-tracked guitar parts a thin synth string sound or the like might fill in some upper-mids, without stepping on the lower-mids of chunky guitars; if the keyboard sound is too bright (~8-10k) or too prominent on the upper mids (~3-5k or so) it could potentially end up sitting too far forward in the mix, so you might want to EQ the keyboards by taking out the lower mids and the very highest frequencies, for a thinner, less-upfront tonal character, and adding a little ambience to help keep the keys in the background, if needed. For sparser arrangements, an airy/ethereal pad might do the trick, adding texture and depth as it floats behind the rest of the parts. 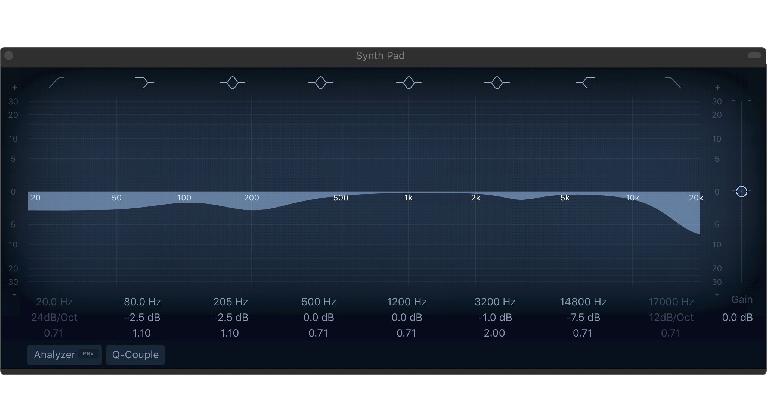 If the guitars are heavier, with the typical buzzy tone and scooped-out mids of many modern distorted guitar tones, a more midrangy pad sound (like an organ with just a few lower drawbars out) might work well, contributing fullness while the brighter guitars easily float over it.

Doubling guitar and bass parts is another standard—and often very effective—use of keyboards, especially in riff-based tunes. Low piano notes doubling a bassline or low-string guitar riff can add some nice metallic ring to a continuous riff that sits under more prominent parts, particularly if the doublings are used in specific spots to intensify the arrangement when the song needs a little push. An octave doubling of a percussive synth sound layered with a cleaner guitar figure could be used to add some richness and natural chorusing between the parts, much like the contribution of the higher strings on a 12-string guitar. Opposite-panning of doubled parts can be employed to widen the overall mix, or a doubled riff with a crunchy keyboard sound can be panned straight-up center with the original guitar riff, for extra power.

Often the best way to incorporate keyboard parts into a guitar tune is to use them sparingly, bringing keys in for certain sections, or at certain places in the song, as the arrangement builds. The most obvious implementation of this is the keyboard pad that comes in lightly in the choruses, to add some subtle push in those sections. Of course, an alternative approach might be to have a background keyboard part—a pad or light arpeggio—in the verses instead, and then replace it with a more prominent guitar part that takes over in the choruses, putting more of a spotlight on the guitars.

For more adventurous arrangements, keyboard instrumentation, style, and prominence in the arrangement can vary from section to section, and often the keys may be called on to be the element that adds that little extra push in a bridge or later choruses, while the main guitar parts stick to a steady rhythm or riff. If this is done well, the arrangement will still be guitar-centric, but those extra elements in the background can provide a little welcome variation, extra energy, and general ear candy.

While it’s certainly possible to build up a guitar-only arrangement that provides plenty of variation in tone and texture, guitarists who turn to keyboards for that variety might find that those parts can really contribute something distinctive, without taking away from the world of guitars that defines the musical style.