Mixing drums is one of the most important parts of producing music, and potentially one of the most delicate. Joe Albano shares 7 quick but invaluable tips to help you get it right.

One of the instruments that gets the most attention in mixing is the drums. It makes sense—often there are multiple tracks with various components of the drumkit that require very different EQ, compression, and ambience choices, as well as a composite version—the overheads—and any processing done to all these elements as a whole. Add to that the variety of drum sounds commonly heard in various genres of popular music and it’s not surprising that novice mixers are sometimes a bit at odds as to how to approach getting the best, most suitable drum sounds. Here—in no particular order—are a few basic suggestions and considerations for working with the drums in a mix.

1. Set A Path From Point A To Point B

A good way to begin is to take inventory and set goals. Whatever processing is ultimately done—and that can vary quite a bit depending on musical and mixing considerations—the specifics will be decided in large part by the initial sound of the recorded drum tracks, and the drum sound the mixer has in mind to suit the musical style and the particular song and arrangement.

The raw recorded sound is the first consideration. Is it a live recording? Are the drums individually close-miked, with overheads—the usual approach—or does the recording consist of mainly overheads with one (or two) spot mics only on the kick (and maybe snare)—also a common technique? In the former case, you’ll be starting with drier, tighter individual drum sounds that may be a bit mid/bass-heavy, with strong transients; in the latter case, you’ll be working from a more open, ambient recording, with thinner, more boxy-sounding drums. Not surprisingly, the specific EQ choices you’ll make will be different, as will the compression settings, especially if you choose to compress individual drums instead of or in addition to the entire kit.

Alternately, you might be working with a sampled drum kit. In that case, your choice will be determined by how much—if any—processing has already been applied to the samples. Some sampled kits feature raw drum recordings, to make the mixing experience as similar as possible to working with live drum tracks; others take the opposite approach, shooting for a more finished, polished drum sound, applying EQ and compression to the samples themselves. A novice mixer applying typical advice about drum processing will need to factor in the state of the sounds, to avoid over-processing by following recommendations intended for raw straight-off-the-mic drum sounds that would be too much for already-tweaked drum samples.

When dealing with a drum recording made up of close-miked drums and overhead mics, a key decision may be to determine which of these will serve as the main component of the finished drum sound. One approach would utilize the close-miked drum tracks as the main sound, for a tighter, closer overall drum sound, adding in just enough of  the overheads for cymbals and a little natural depth and ambience. Another approach would be to use the overheads as the main element of the drum sound, processing that for as finished a sound as possible, and then adding in the individual drum mics as needed for fullness (kick), clarity, detail, and a little extra punch. 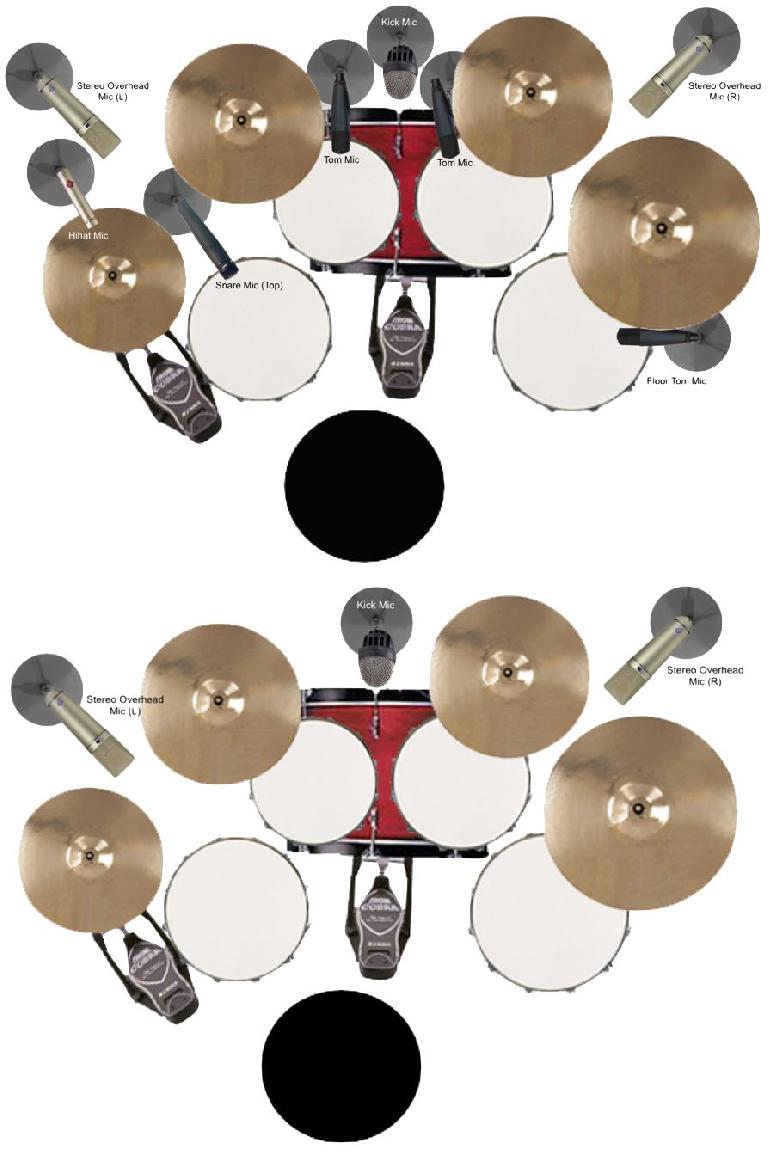 The former approach would be more likely to yield a modern in-your-face drum sound, while the latter would typically result in a more naturalistic room sound for the kit. Each of these drum sounds would be viable for different musical genres and mixes—heavily processed pop music would obviously benefit more from the tight close-miked drum sound, while classic rock and roots music would likely find the overhead roomy drum sound more appropriate.

Most recommendations for individual drum EQ suggest choices that have the ultimate effect of pulling down the mids and lower mids—to remove boxiness and tubbiness, respectively; bumping up the bottom somewhat, to add thump and solidity; and pushing the upper-mids, for presence and to help elements like the snare cut through the mix. These are all solid suggestions, but keep the previous consideration in mind when determining how much EQ should be applied.

Drums recorded with brighter mics—say, condensers rather than the usual dynamic SM57s and the like—and pre-processed samples will not need or gracefully accept anywhere near as much of this kind of  EQ before they start to sound over-processed. You know that sound—overly-thumpy snare, overly-bright thin kick that sounds more like a bouncing basketball than a drum, etc. 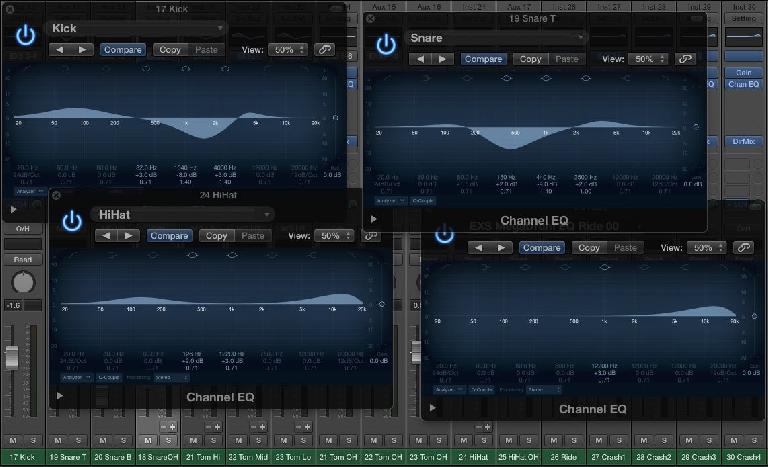 Frequently A/B’ing the raw drum sound against the EQ’d version can help to make sure that you’re not going overboard with the EQ—as your ears adjust to the processed sound it can be very easy to get carried away, so it’s always good to have periodic reality checks. To that end it’s also not a bad idea—especially for newer mixers who don’t yet have a well-defined target sound in their ears—to occasionally reference commercial drum sounds that can serve as a goal for a particular tonality.

One common mistake is to over-dampen the drums. Sometimes this is done by the recording engineer, placing tape or dampers on the drums prior to recording; other times it might be done by the mixer, with certain compressor settings; with sampled drums the ADSR’s decay/release controls might be applied to shorten a longer drum ring, especially on toms.

A little of this damping can be well-advised, since close mics will pick up more of the drums’ over-ring than the audience would hear at a normal distance, and overly-long, ringy drums might end up stepping over themselves, especially in rapid figures. But too much damping can sometimes be problematic—what may sound like the proper amount of damping when the drums are heard soloed may turn out to be too much when they’re heard in the finished mix.

Other elements of the mix will mask much of that ring, but it will be perceived subliminally, making the drums sound more open and natural; if the drums are too well-damped, they may instead sound choked when everything else is added in, making for an overly-dead drum character. Applying or adjusting damping might be initially done with the drums soloed, but the final settings should always be made while auditioning the kit in the context of the full mix.

If the recorded drums are already too choked—too much damping applied before recording, or overly-short drum samples—it may still be possible to remedy this to some degree. Adjusting a compressor’s release time is the classic approach (see below), while a more modern alternative might offer an even more direct way to adjust damping/decay—using compression under the hood, a Transient Shaper (a.k.a. Transient Designer, Enveloper, etc) plug-in offers direct controls for adjusting attack and release, and should let the user dial up a more prominent decay for overly-damped drums. Add in a little small-room ambient tail and you might be able to successfully restore a more natural ring to excessively short drum sounds.

5. Shape The Drums With Compression

To expand on the above reference, it’s possible to use compression to tweak the envelopes of the drums for creative purposes—this can be done subtly, or for more dramatic effect. Drums that are too tight and dry or too loose and ringy may be processed for a more appropriate balance between punch and boom—the trick is to apply the right attack and release settings. 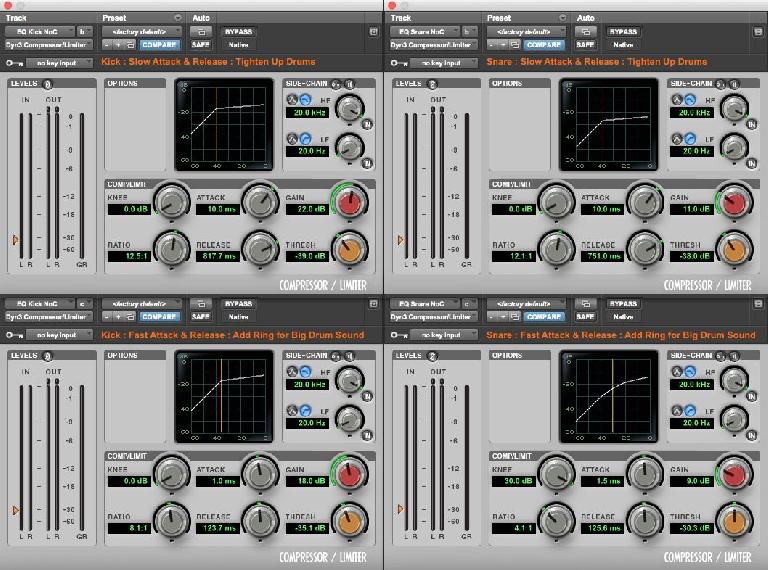 First, you’d dial up a decent amount of compression—I’d suggest anything from a 4:1 to a 12:1 Ratio, digging in a bit with the Threshold. To affect the envelopes of the drums, different combinations of attack and release can then be employed to shape the drums’ envelopes. For overly-ringy drums, a slower attack and release can tighten up drums by letting the initial attack through and then clamping down on the sound, damping down any excessive ring. Good starting points might be around a 10 millisecond attack and a release time of a few hundred milliseconds up to a second or two, or longer. If done well, you can tighten up a sloppy kit for a sound more suitable for complex or busy rhythmic figures.

The opposite effect can be dialed up to add some ring and bloom to an overly-dead drumkit. In this case, a faster attack and release will do the trick—attack times of a millisecond or so and release times around 100 milliseconds down to around 50 milliseconds will clamp down on the initial transient, then let whatever remaining ring is there to pump up and bloom, for a bigger, boomier drum sound. This is often done for musical styles where a bigger drum sound is appropriate, and faster compressors like the FET-based Urei 1176 and similar models excel at it. One caveat—as with any appealing effect, a more subtle application is often more effective in the final mix.

6. Don’t be Afraid To Double Up

A finished drum sound often includes the application of compression at multiple points. Compressors are typically used on the individual kick, snare, and sometimes tom tracks (or toms submix) as above, to control punch and ring; another compressor may be used on the overheads, to emphasize ambience; and to top it off, compression may be added to the overall stereo drum submix. It’s normal to have this much compression, as long as you factor it all in—generally this means utilizing a back-and-forth process, tweaking individual compressor settings as additional compression is added to the drums, backing off on the amount of effect that may be applied via the individual drum compressors when you hear how the additional overall compression affects the sound. 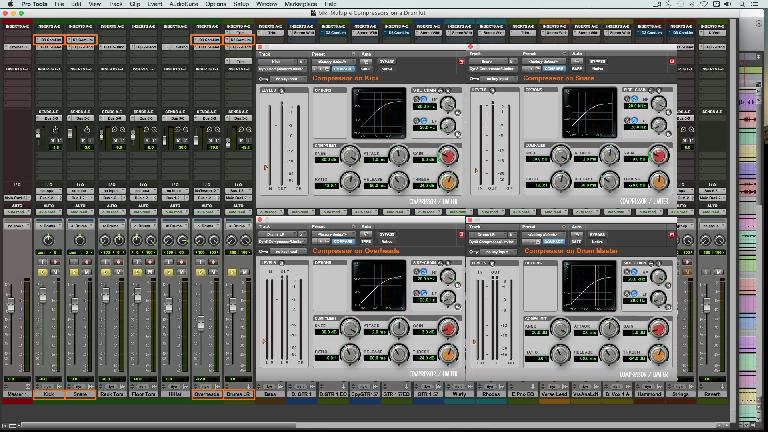 Of course, just because it’s common practice to have multiple compressors on a drum kit, it doesn’t mean you have to do it. And the various compressors don't all have to use similar settings, or apply the same amount of compression. Compressors on the overheads and stereo drum submix will likely apply much more gentle compression than individual drum compressors, and that’s appropriate, since they could easily end up pumping too much on cymbals—unless of course you’re going for that effect, which is also a common technique.

One more suggestion—again, relating to compression. A popular trick when using compression is to copy the drums to another track, or use Sends to route them to an Aux (like with reverb), and apply compression only to the copy, mixing the compressed version of the drums with the uncompressed version. The original uncompressed drum track will supply transient punch and natural dynamics, while the copy can be heavily compressed, and then gradually added to the original in just the right amount get the effect of dramatic compression without overly squashing the drums as a whole. This technique is called Parallel Compression—some engineers refer to it as “New York Compression”—and often it can be just the thing, combining dramatic processing and natural drum sound to the perfect degree. As an extra bonus the compression balance can be easily adjusted with a single fader, finalizing it as the mix nears completion.

Some mixers may spend almost as much time on the drums they do on the rest of the mix, but with a little practice any of the above considerations could hopefully be somewhat helpful in getting the perfect drum sound.