7 Quick Recording Tips That Will Improve Your Productions

Recording is a mixture of art and science, but you can always benefit from some experienced producer's pro help. Here are 7 top tips to help you get even better takes.

A lot of attention is paid to the art of mixing (and rightly so), but it all starts with the recording itself—if the basic recordings are not as good as they should be, then the mix can turn into an uphill battle to address flaws, rather than the creative process it should be. So here are—in no particular order—9 suggestions for things to think about and watch out for when laying down tracks..

Even the most novice recordists know that they should maintain a healthy level on the meters when recording, while avoiding overloads (meters going into the red). But what constitutes a healthy or optimal level is not always as obvious as it would seem. In the analog era, levels needed to be as close to maximum without distortion as possible, to keep the signal well above the ever-present background noise of tape hiss. But digital recordings have no background noise, and with today’s 24-bit recording standard, any potential low-level artifacts of the digital recording process are vanishingly low in level—low enough to be effectively inaudible. Additionally, while occasional excursions into the red were permissible—even adding a little desirable edge (i.e. the warmth and presence of tube drive or tape saturation), digital overloads are harsh and unpleasant and must be avoided much more strictly.

Unfortunately, when recording levels are set during the pre-flight sound check, performers often push harder during the actual takes, and so levels that almost maxed out in sound check can easily overload in recording, often ruining the initial take(s)—you know, the ones that often seem to catch that initial magic of inspiration. And while some audio repair software might be able to salvage such recordings, you shouldn’t come to rely on it—it’s simply bad practice to let recordings clip. A maximum (peak) level of around -6dBfs (6 dB below digital maximum) even down to around -12 should leave enough headroom for any swings in level that may occur as tracking progresses; while these levels—and the resulting audio files—may seem to be low both audibly and visually, that can easily be remedied after the fact by simply increasing the gain (or display) of the clean un-clipped 24-bit audio.

There are three distinctly different types of audio inputs, designed for signals coming in at different levels: line level inputs, mic inputs, and “instrument” inputs. It’s important to choose the right type for each audio source. It’s not just a matter of level—if that was the case, then simply tweaking the input gain would be all you’d need to do. But those three different signal types also have different requirements for input impedance, to assure optimal signal transfer—if the proper input impedance is not provided, the signal can suffer from noise and frequency anomalies.

Mic signals are easy—on most interfaces they’re not only clearly marked, but use the standard familiar 3-pin XLR connection. They provide a suitable impedance for mics (typically around 2kOhms or so), and enough gain to bring up lower-level mic signals to standard line level. Line inputs most commonly utilize 1/4’ connections (usually balanced (TRS) on better interfaces); less gain is required, and input impedance is higher, around 10kOhms or more. 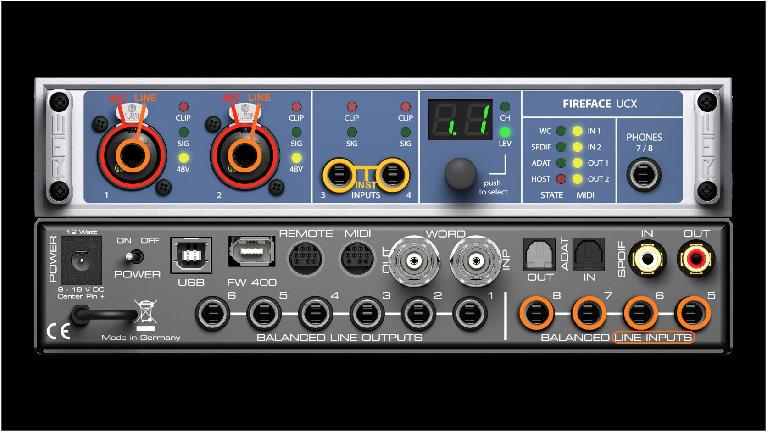 Perhaps the most common mistake is to use a line level input in place of an instrument input. This can easily happen, since they share the same 1/4” connections (though the instrument input will likely be unbalanced TS), but it can compromise the “instrument” signal. Specifically, instrument here means electric guitar and bass, which have a very low level output and require a very high input impedance (about 1MegaOhm or so) to avoid recording a weak noisy signal with a thin tone. Most interfaces do carefully mark these different input types (though sometimes line and instrument inputs may share a jack, with a switch to select the right type/impedance for each application), so a little attention paid up front can insure the best recordings for all types of signals.

Nowadays most recordists are familiar/comfortable with DI (Direct Injection) recording—plugging an electric guitar or bass directly into the instrument input on the interface, rather than miking up an amp, utilizing a virtual guitar/bass amp to add the desired edge and distortion. But to get the best results, it’s a good idea to make an effort to calibrate the level of the incoming signal to match the levels expected by the virtual amp of choice. Most amp sims are designed to produce expected amounts of drive at the expected settings on the virtual front panels, and if they’re hit with excessively low or excessively high levels, they won’t deliver the desired tone and crunch. Many virtual amps specify an optimal input level prior to the modeled amp (some provide input level indicators and trim controls to help), but if one doesn’t, I’ve found that typically a maximum signal level (measured while bashing out full-volume chords) of around -3 to -6 dBfs works ok with most sims. 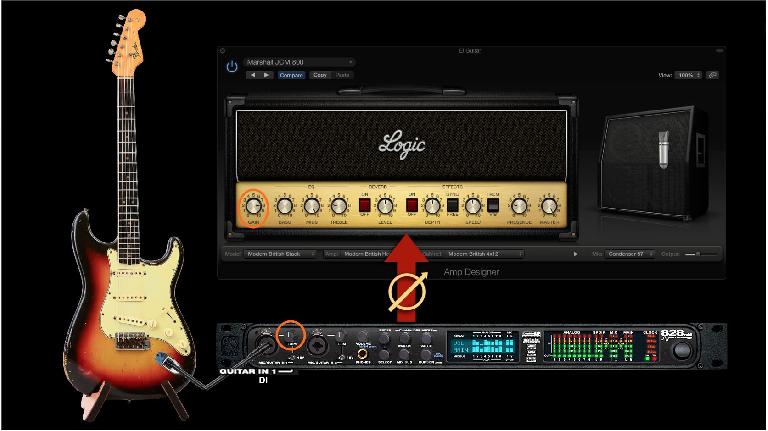 A quick note on bass DI—it’s long been common practice to record the bass with both a DI track and a miked-up amp track, and there’s no reason not to do so even if the “miked-up amp” track is really a second DI track through a bass amp sim (in fact, many virtual bass amps provide a DI/“Amp” blend control internally, making the mix possible with only one DI bass track).

A couple of mic-related potential problems (that might not be as obvious as familiar issues like p-pops and proximity effects) relate to positioning—specifically distance and angle. Optimal distance for a studio (LDC) condenser is usually from around 6” to a foot or so, to capture the “air” around the vocalist/instrument. But performers—especially singers—can often move around, resulting in inconsistent distance and noticeably varying tone from take to take, which can be problematic later when comping (combining the best bits and pieces of several takes into a final version). Sometimes the popscreen can be placed at the preferred distance as a guide, having the singer sing right up against it for consistency; it’s also common to mark an “X” on the floor with tape—either way the recordists should keep an eye (and ear) open to ensure consistent distance is maintained.

Another mic issue relates to the angle of the mic, again especially with vocalists. Since the tone of most mics (at least the cardioid mics usually most commonly for studio vocals) varies at different angles, you want to make sure the singer is not too far off-axis (to the side)—unless you’re having a problem with plosives (p-pops), in which case a very slight angling of the mic (even just a few degrees) can sometimes avoid the blasts of air from the singer’s mouth that are causing the pops, with minimal effect on tone.

The musicians’ cue mix—the blend of instruments and voices the performers hear in their headphones while recording—is critical to getting the best performances, but it’s often given short shrift. It’s important to spend a little time and effort to make sure that the performer is getting a suitable blend—after all, all his musical choices—dynamics, pitch, rhythm—are based on what he’s hearing in the cans. Too much “me” can result in a lackluster performance, or pitch problems if a singer can’t hear the backing track well enough to stay in pitch; not enough of himself can make a singer push or strain to be heard, to the detriment of musical dynamics and vocal tone. Often a player will do his best with certain specific elements of the mix pushed (like a kick drum, for a bassist), or other parts pulled out - especially scratch parts or countermelodies that may distract from the part he’s laying down.

Too much reverb, even when it’s requested, in the phones can cause a singer to drift off-pitch, which is a common issue. And many singers remove one earcup to better hear themselves acoustically - again, to help maintain their pitch. This can cause problematic leakage into the mic if it goes unnoticed, so due diligence is required. At the very least, the recordist needs to always check for technical issues in the monitor mix, like distortion, perhaps from an underpowered headphone amp, or excessive latency from improper DAW buffer settings—this may necessitate actually putting on the performer’s phones and going through the motions, but whatever it takes it’s definitely time well spent. 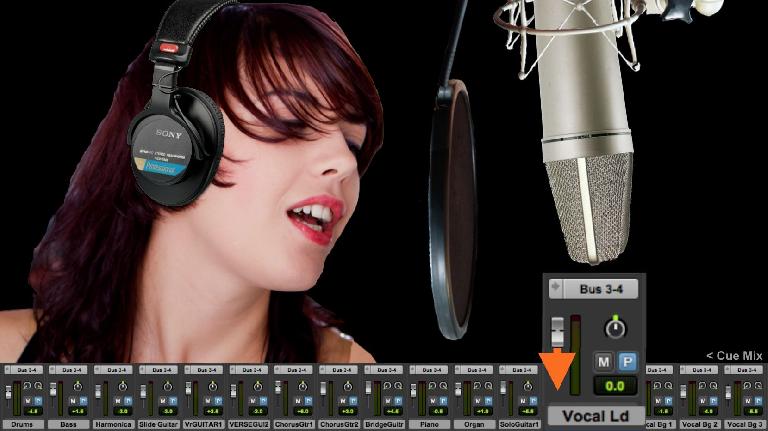 More experienced recordists may play around a bit with the monitor mix to deliberately affect a singer’s performance. If a vocalist is delivering a lackluster performance, some engineers might try to force him to push his vocals a little harder by subtly  and hopefully unnoticeably pulling his own vocal level down in the monitor mix until it’s just slightly buried in the track. This may force the singer to push a little harder to reach the same level he’s gotten used to, and that extra push might add a desirable degree of musical intensity to his performance. This is actually a pretty common technique but it should be used carefully—you don’t want the vocalist to sacrifice musical dynamics just to stay comfortably above the backing track, and you don’t want him to blow out his voice too soon in the vocal session either, so if you’re going to do this, pay close attention to the singer’s performance as the session progresses.

One question that often comes up is whether to use processing - specifically EQ and compression - on the signal as the recording goes down thus making that processing permanent, or record dry (or as dry as possible) and leave all processing to the mix, where it can be done and undone at will, and be applied in context of the full arrangement. When I was teaching, I always advised students to do the latter if they’re just starting out, but as they get more experience, to add a small degree of input processing as needed.

Personally, I rarely use EQ on the way in  (unless it’s a “character” EQ, and even then I might run the signal through it flat, just for the analog warmth)—I prefer to choose the best mic and position it carefully for the desired tone. I do tend to add a little gentle compression or limiting on some signals: maybe a little subtle limiting on a slappy bass part, or a bit of very gentle compression on a highly dynamic vocalist. But I try to keep any input dynamics down to no more than around 3 dB or so of gain reduction, either on peaks or overall, so the part doesn’t sound compressed at all, leaving me the ability to apply suitable compression in the mix without limiting (no pun intended) my options down the road.

So those are just a few simple suggestions for approaching the art of recording. I hope they’ll be of use to some budding producers and artists out there sitting in front of their DAWs getting ready hit the big red button.

Continue your quest to improve your recording, mixing and mastering skills. Join us in the Ask.Audio Academy's Audiopedia series: https://ask.audio/academy?nleloc=category/audio/topic/audiopedia