Many engineers, if asked to pick the greatest vocal microphone of all time, would probably choose the Neumann U47.

This long-since discontinued classic has lent its warm, rich, yet detailed sound to more recordings, in more musical genres, than you could possibly list. For many, it’s the holy grail of vocal mics—originals command stratospheric prices, and most of the many clones made nowadays inhabit the upper end of the price range. The original U47, first released in 1947, was a large-diaphragm, dual-pattern (cardioid & omni),  tube-based condenser mic, with its own dedicated power supply. Later iterations switched to transistorized (FET) circuitry—the U47 FET—and are also highly sought after, but the original tube mic is still the king. It utilized Neumann’s dual-diaphragm M7 capsule, originally found in the CMV 3 (“Neumann Bottle”), another classic model.

The U47 boasts an almost perfect combination of warmth and clarity—two qualities that can often be at odds with each other in lesser condensers—and not only makes just about every vocalist sound bigger than life, but excels on many instruments as well. It’s the gold standard for warmth & detail, and no “best mic” list would be complete without it. The U47 was also distributed through Telefunken, so many vintage units may carry the “Telefunken U47” badge, but it’s the same beauty. 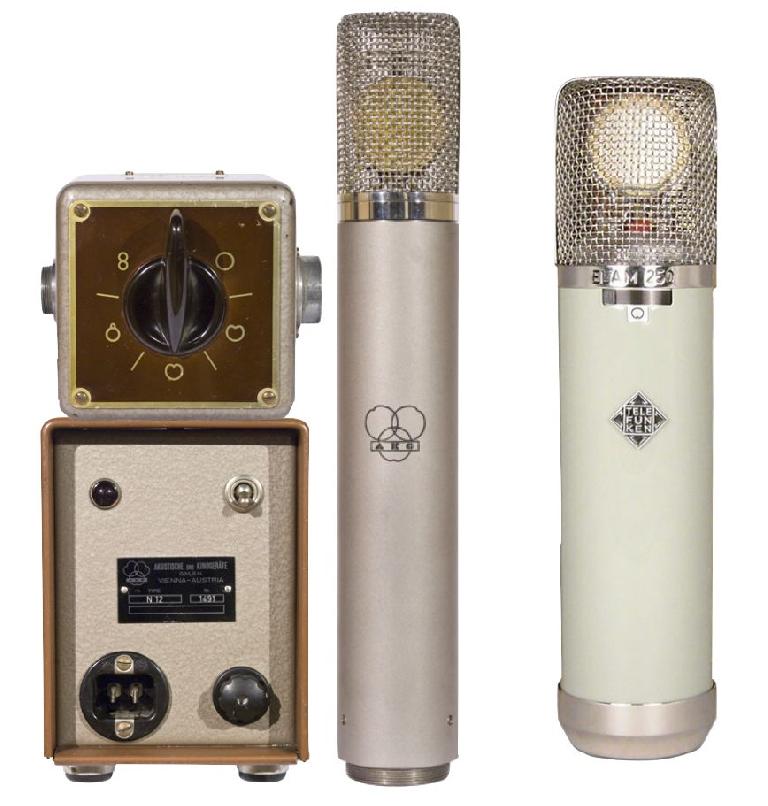 The C12 (1953) was AKG’s premier condenser mic—another “holy grail” mic for many engineers. Also a large-diaphragm, multi-pattern, tube-based condenser, it’s CK12 capsule gave it a smooth, bright, airy quality. If you were to put one side by side with a U47 (as I’ve been fortunate enough to be able to do), you’ll hear a distinctly different sound—both are smooth, well-balanced, and detailed, but while the U47’s defining characteristic is its warmth, the C12 is known for its crisp detail and open, airy sound, which has made it extremely popular for everything from vocals to live instrumental recordings—a pair of C12s (or its stereo cousin the C24) is often the choice for stereo recordings of sources like choirs or full orchestra.

Notably, the C12 was capable of nine(!) different patterns, remotely-selectable via a remote-control unit hooked up to its power supply. Like the U47, a version of the C12 was also made for & distributed by Telefunken, as the ELA M 250 (omni & cardioid) or 251 (omni, cardioid, figure-8). The Telefunken version(s) used the same capsule and tube, but had a larger case and some internal differences, so there are slight variations in sound, but it has the same essential C12 character, and is equally desired by microphone aficionados, so I’ve included it here as well.

AKG currently makes a (mostly faithful) C12 reissue, the C12 VR, which commands a whopping $6000, for those who have to have one and can’t find (or afford) a vintage unit. 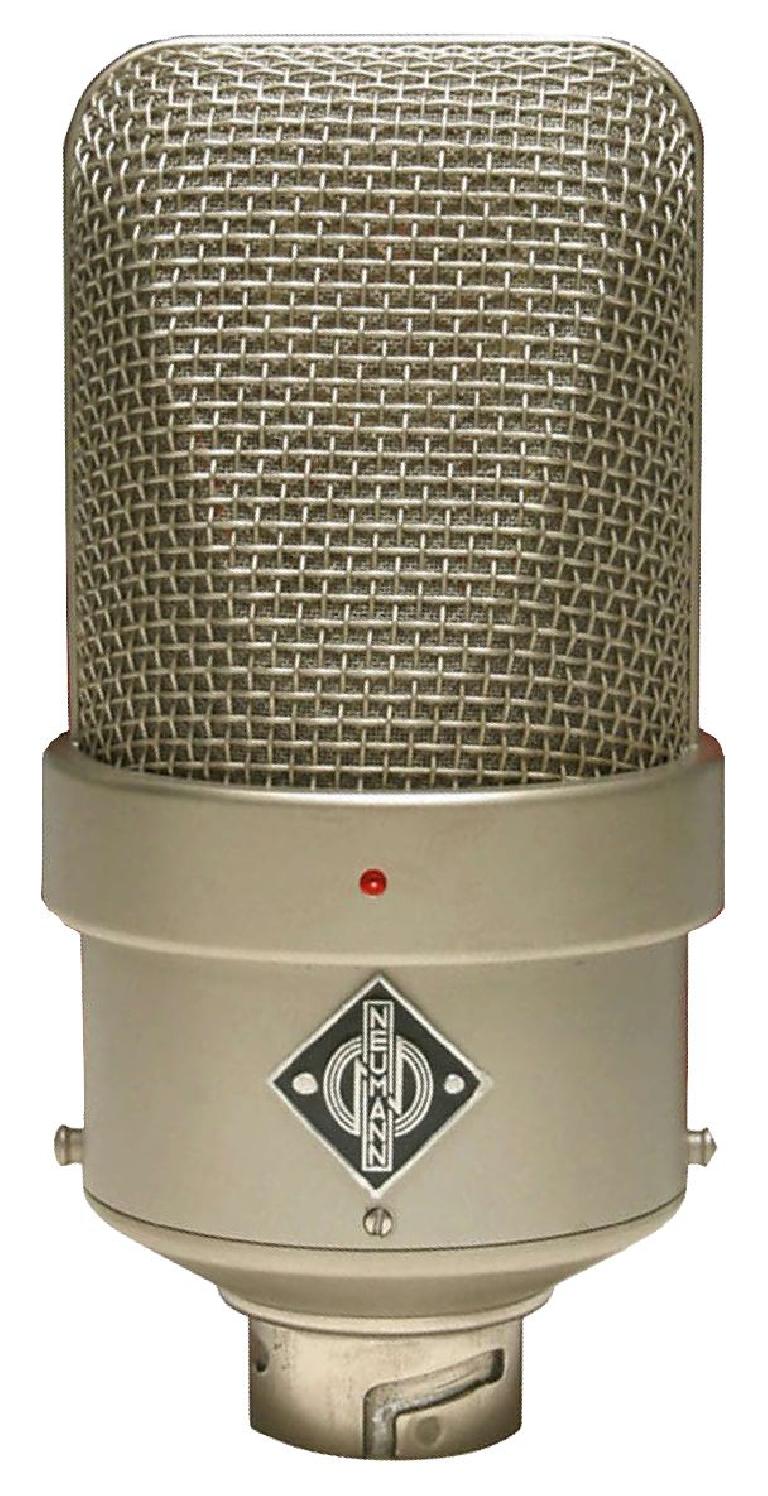 The squat profile of the Neumann M49 is also well-known by engineers.

Another tube mic, utilizing the same capsule as the U47, the M49 revisited the wiring & design, making it the first mic capable of remote control of its multiple patterns (a feature later implemented in the AKG C12 as well). The differences in design, shape, and components gave the M49 a warm character, like the U47, but possibly a somewhat smoother overall tonality, with a somewhat less-prominent presence bump than the 47 (likely part of what made the older design so popular for vocals). The M49 was (is) widely used on everything from vocals to instruments, where it excels—the remote pattern capability made it a convenient choice for ensemble miking tasks. Currently, Neumann makes a couple of models based on the M49—the M149 and the TLM49. Both use the same K47 capsule as the original (and the U47), but are transformerless designs, for a quieter, more modern spec. 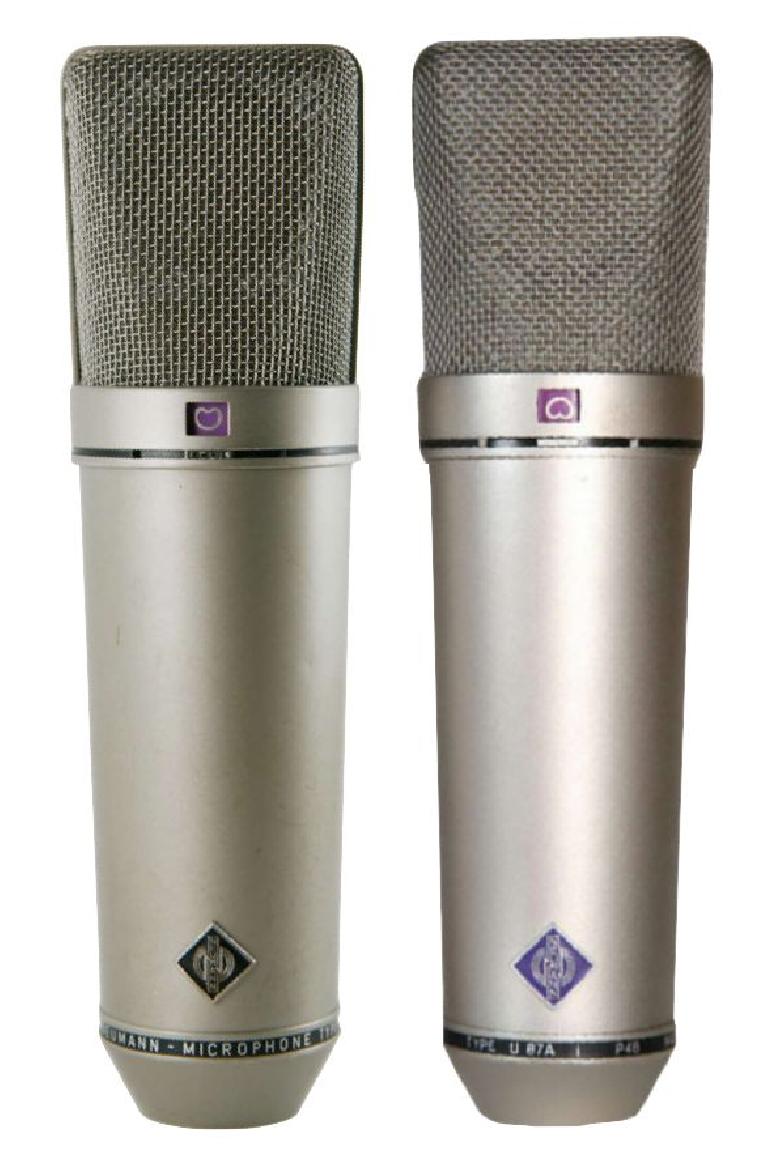 As times (and the availability of parts) changed, Neumann transitioned from the U47 to the U67, also a multi-pattern large-diaphragm, tube condenser, in a more svelte case (in fact, this shape is arguably the most iconic microphone shape of all time, thanks to its use in the U-series mics, the U67 and U87). A new capsule, the K67, lent it a warm, detailed sound, and the U67 quickly became a workhorse mic for studios. As the industry began its transition from tube electronics to transistorized circuitry, a transistorized version was developed—the U87—utilizing FET circuitry, a transformer-based design, phantom-power, and an updated (K87) capsule, and this mic is the first in this list (so far) to still be manufactured today (although in a slightly updated version, the U87Ai).

The U87 is arguably the most widely used hi-end large-diaphragm condenser mic of all time—its clear, open, detailed sound make it so many engineers’ go-to mic for vocals, guitars, drums—almost anything where a large-diaphragm three-pattern (omni, cardioid, figure-8) condenser would be suitable. The U87 enjoyed a few updates over the years—the “A” designation indicates later versions, and the current iteration—the U87Ai—features greater headroom and sensitivity. Comparing a modern U87Ai with an older U87, to my ears (at least with my ’87) the older version has a little more air and presence, while the newer model is a tad brighter and crisper, but the differences are subtle (unless you’re looking to match a pair for stereo recording). But in any version, the U87 is one of the top studio condenser mics of all time, and, in an ideal world, every studio should have one—if the budget will allow for its ≥$3k price tag! 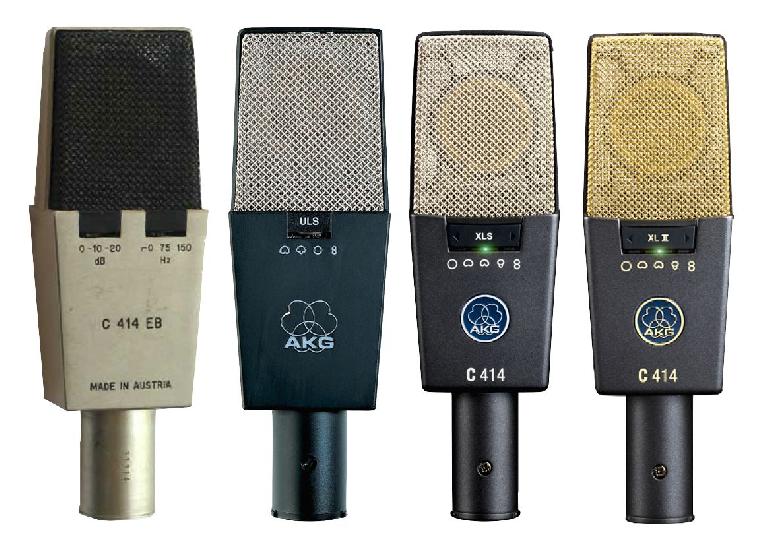 If the U87 is one of the most recognizable and widely used studio condensers out there, then the AKG 414 may be a close second. It’s a direct descendent of the C12—that classic model evolved into the tube-based C12A, which adopted a similar squarish/trapezoidal body, and eventually into the (FET) transistor-based 414, which, like the U87, is still in production.

Like all the other mics listed here so far, once again the 414 is a large-diaphragm, multi(4)-pattern design. The classic 414, like many AKG mics, has a drier overall balance with less upper midrange (vocal) presence peak, in comparison to Neumann models, and a more prominent high-end (≥8-10k). To my ears, it’s a more neutral, slightly crisper sound, which makes it very versatile, especially on instruments, where it can provide clear, open recordings of everything from piano to winds to drums & cymbals, to guitar amps. And the ±$1k price point of the various 414 models currently in production may be reasonable enough to make a stereo pair an affordable option.

But take note—if you set out to pick one (or two) up, you may encounter an array of different 414 models. Besides the sub-$1k “budget” versions (the 214 and 314), you may run into (among others) the 414 EB, the 414 B-ULS (what I referred to as the “classic” 414), the 414 XLS, and the 414 XLII (which adds a slight presence bump to the typical flatter 414 balance). Thanks to it unhyped sound, wide response, pattern flexibility, and conveniently small size, the 414 (or one of its variants) is another mic that most studios will want to have (often in pairs) in their mic closets.

So far, all the mics I’ve mentioned have been large-diaphragm, side-address designs, but the last two in this roundup are small-diaphragm “pencil” mics—classic instrument mics. One of the most respected models of this type is the vintage Neumann KM84 (cardioid) / KM83 (omni). This mic brings Neumann’s characteristic presence & detail to the small-diaphragm design, and the KM-series are, once again, many engineers’ go-to mics for acoustic guitar, hi-hat, drum overheads, orchestral winds, and almost any other instrument where the characteristic detail of a condenser is needed.

Now out of production, the modern equivalents are the KM184/KM183—the 184 has a slightly accentuated high-end (7k-15k), compared with the 84’s flatter treble response, which has made the older model a studio favorite, though it still offers that subtle Neumann “presence”.

The 451 is AKG’s small-diaphragm pencil mic—their answer to the Neumann KM84/184. Originally available as a modular design, with a thin, pencil-style preamp/body that could mate with a variety of different capsules (different patterns), the current version—the 451 (451b)—is a cardioid design which like its Neumann counterpart, is best suited for various and sundry instrumental miking tasks.

The 451 has basically flat response, with a slight high-end lift, which imparts the subtle crispness characteristic of most classic AKG mics (and which distinguishes them from similar Neumann models, with their distinctive subtle “presence”peak). This is the kind of mic you find in multiples in most studios, where it handles everything from close-miking (acoustic guitars, hi-hats) to stereo ensemble applications.

And that wraps up this little roundup of the best-of-the-best in studio condenser mics. Now, you’ve probably noticed that this list has been populated heavily (OK, exclusively) by mics from Neumann and AKG. Of course, that’s not to say that there aren’t plenty of incredible classic mics from other manufacturers. But this article was tasked with listing the best Condensers, and many of those other top classic mics are Ribbons (Coles, RCA) or even Dynamics (Sennheiser, Shure, EV). And of course, there are tons of fabulous modern condensers around nowadays, and not just at the highest price points. But each of these 7 (or so) still stands out as a mic that defines a certain sound—and those qualities have come to define the sound of classic and modern recordings. So they deserve their places at the top of microphone wish list—those mics that, if you could have only one, it would undoubtedly be one of these classic designs.