Logic Pro X is a deep application and it is easy to be less efficient with workflow than you could. In this article, we explore some workflow mistakes a user might unintentionally be making.

1. Saving that which need not be saved

When you choose “Save As” you are not only given the option to save the project, but any audio files, EXS 24 instruments and samples, Alchemy audio data, Ultrabeat samples, Space Designer impulse responses, movie files, and Apple Sound Library Content. There is good reason for that. You may wish to work with another user who does not have all that you are utilizing. Also, you may want these elements included for archiving purposes.

But time and time again I see users wasting hard drive, or worse SSD space because they are including things that every Logic Pro X user has! I always recommend saving the audio files you record or bring in to a Logic Project. But why include the EXS 24 stuff if you have not created your own or bought a third party library? The same is true for the Alchemy audio data. The same for the Ultrabeat samples, Space Designer IRs and Apple Sound Library content? When I ask users, they mostly respond that they just didn’t understand or think about it.

In the Project Settings > Audio, you can find a choice that is not well understood by most Logic users. 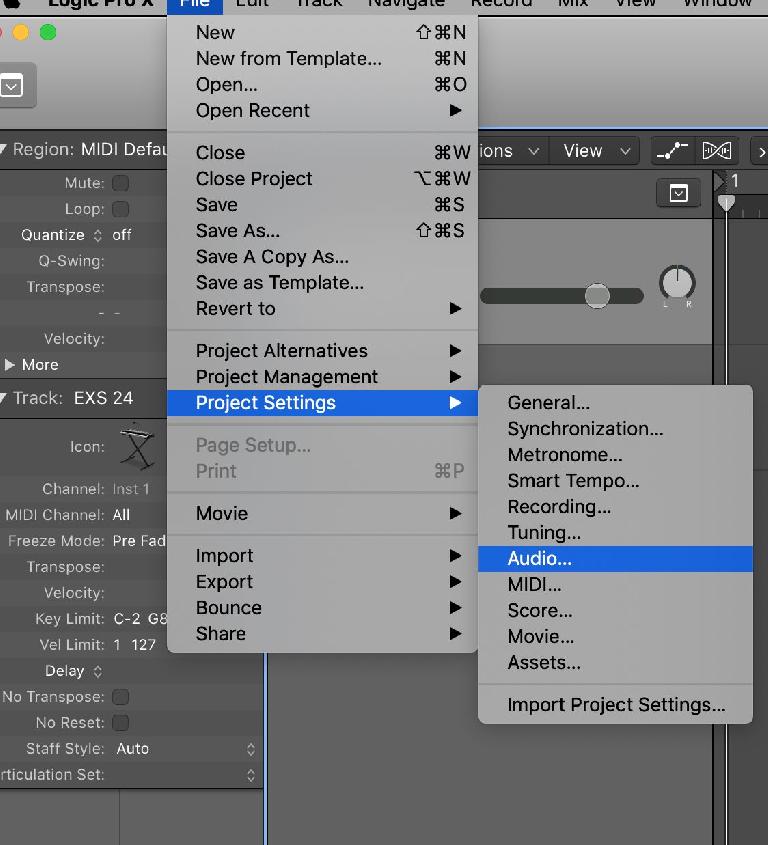 It is quite understandable that a user would not get it because the name is not very descriptive of what it does.

Quite simply, if Automatic management of channel strip objects is checked, when you delete it from the Track List it is deleted from the Environment. If unchecked, it is not.

There are significant options that until recently were Project Settings that are now Preferences, making them global to all Logic projects. Perhaps the most crucial pertain to recording behaviors. 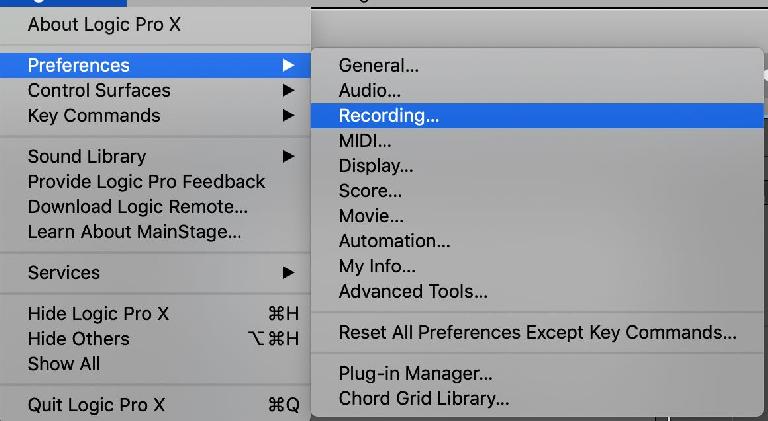 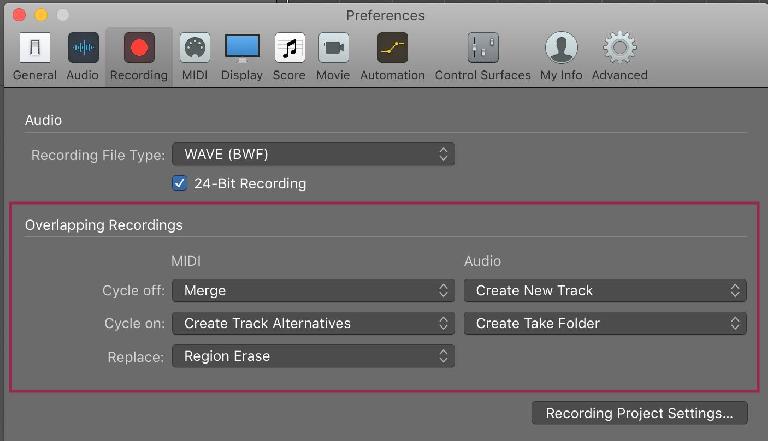 I dislike this change because I want different choices when doing a pop song from a film cue, but I understand that for GarageBand transitioners, the consistency is helpful.

4. Why do my audio files sound faster, or slower?

Logic Pro X comes with a boatload of content including playable software instruments and Apple Loops. If you delete your preferences or if there is an update, you may get a warning that you have not downloaded all your content. (You should, it’s just hard drive space and hard drives are cheap. Also, you can now easily move the content ot another drive, as I have.) Even if you aren’t getting a message, you might want to check in the Sound Library Manager. 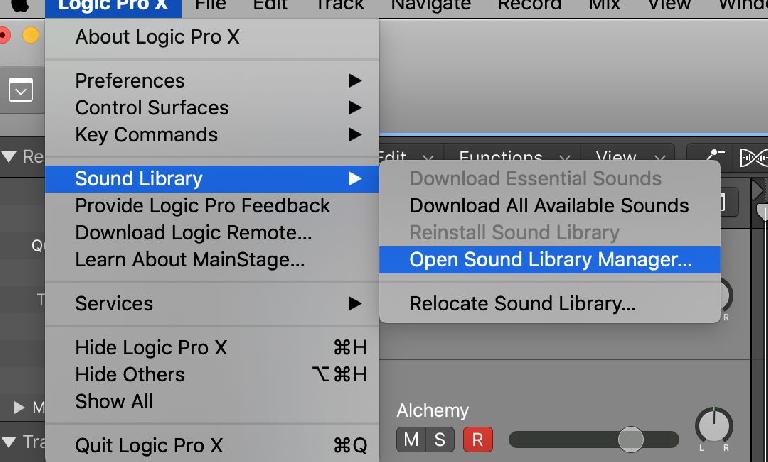 I just did so, and son-of-a-gun, I have missed some.

Notice in the lower left hand corner there is the option to Select All Uninstalled. When you do so, all the content is checked and you have the option to install it. It tells you the size requirements for downloading and installing. 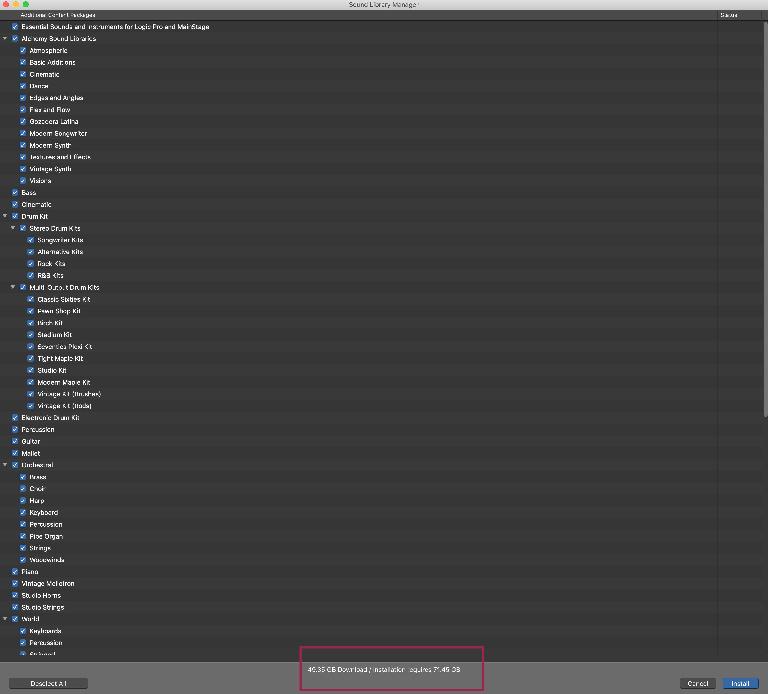 Once you begin, there is a blue progress bar that you can click on to chart your progress.

If you attempt to quit Logic before it is finished, Logic warns you.

As the guy who literally “wrote the book” on Logic Pro’s Score Editor, I find this is widely misunderstood by users. Logic Pro gives you the option to quantize notes to sound a certain way while looking differently in the Score Editor. Swing music is a perfect illustration. Here is a little horn section bit that is quantized to sound just the way I want it to sound with a region parameter quantization choice of 1/8 Swing D, Smart Quantize.

But in the Score Editor it doesn’t look right, because swing figures like these are traditionally displayed as straight 8ths.

The solution is in the Score Editor’s display quantization setting. Here is the default, 16/24 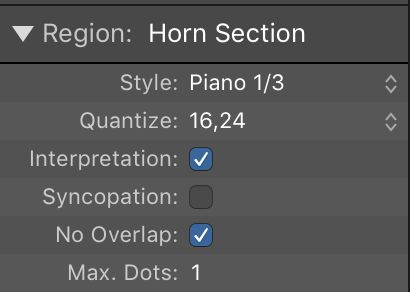 If I change from 16/24 to 8 and drag in an appropriate symbol from the part box, it now looks correct, while sounding exactly the same. 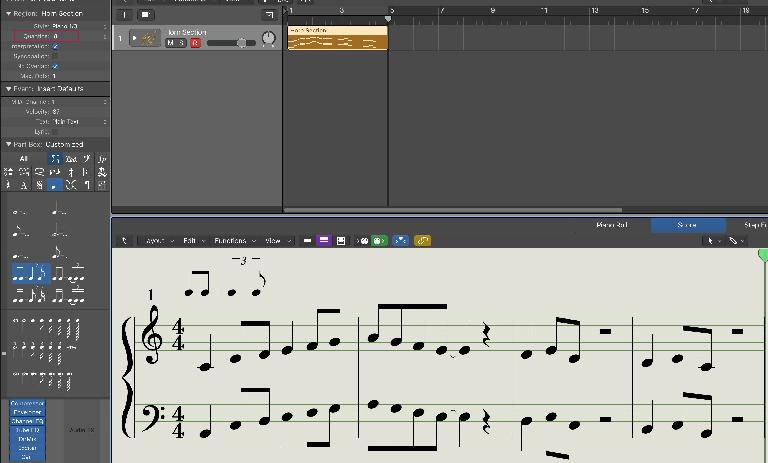 7. Not utilizing the power of key commands

Why risk carpal tunnel syndrome by inefficiently mousing around through menus for your most frequently used actions? Logic has already assigned a lot of key commands for you and given you the ability to assign others. Just go up to any menu and you will see the key commands that are already assigned by default. 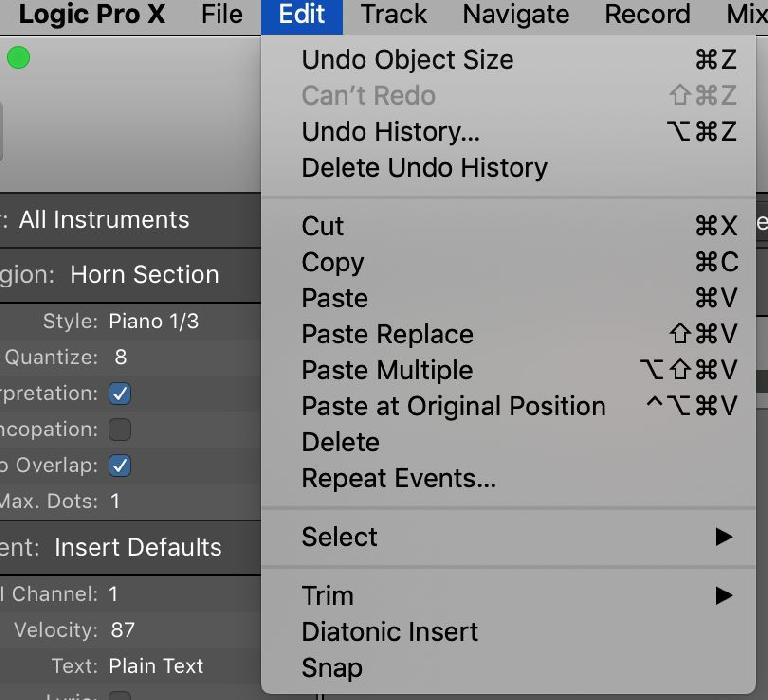 Memorize your most frequently used. I save a ton of time with the key commands for Go To Position, Play From Selection, and Move Region/Event to Playhead Position, just to name a few. Assign your own. In my Score Editor work, Align Object Positions Vertically and Align Object Positions Horizontally are so important to me I have assigned them to F keys.