Language
Switching from playing your trusted guitar to a bass guitar can be rewarding, but also can take time to adjust. With these 7 tips, Rich Tozzoli will have you producing bass guitar like a pro!

Most of you know, as guitar players, we sometimes need to play bass. As a guitar-centric TV composer, I've now played bass on several hundred cues; so a few tidbits have been learned along the way. Here are a few tips and tricks to spice up those bass parts.

One of the first things I did years back was to make a conscious point to think like a bass player. I simply listened to a few of my favorites, John Paul Jones, James Jamerson, Geddy Lee, etc., and studied some of their approaches. Sure, I couldn't play like them, but I could think like them, and not like a guitar player playing bass. Take a little time to study how different bass players dig into songs and build your own hybrid style.

It's probably natural for us guitar players to play bass with a pick. There's nothing wrong with that if it works for the song. But once again, years ago, I made an effort to loose the pick and play with my fingers. It was difficult at first, but rewarding in the end. With fingers, you get more meaty tone and an overall smoother sound. But now, I can play with either my fingers or a pick, depending on the needs of the production. I've actually found bass parts played (by me) with a pick translate better on TV, probably due simply to the attack. 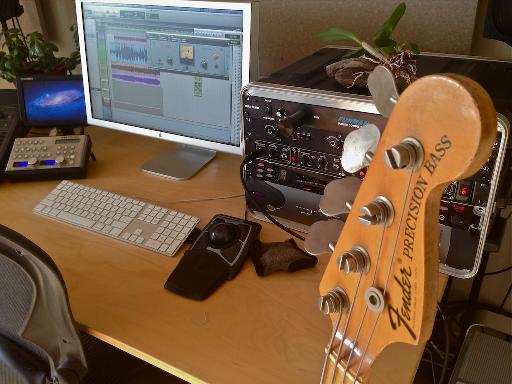 Yes, this may be easier said than done. But for recording purposes, there's a difference between cheap (in quality) basses and good ones. I picked up a nice '70s Fender Precision and it's been my trusty friend on hundreds of pieces of music since. If you're like me, you'll not sweat spending a few hundred extra on a guitar or some pedals - so if you're going to play bass, why not do the same. Your tone will thank you.

Most of us will be recording bass direct, using some form of DI box (versus an amp). I prefer to record the bass completely flat on the way in, and process it in the mix. So my P Bass gets plugged into a Creation Audio Labs MW1 DI channel with a separate tuner output, then into the Pro Tools HDX rig. There is nothing else in the signal path. Of course, you can choose to add EQ or compression, etc. in your recording path, but remember you can't take it off once it's been tracked that way. 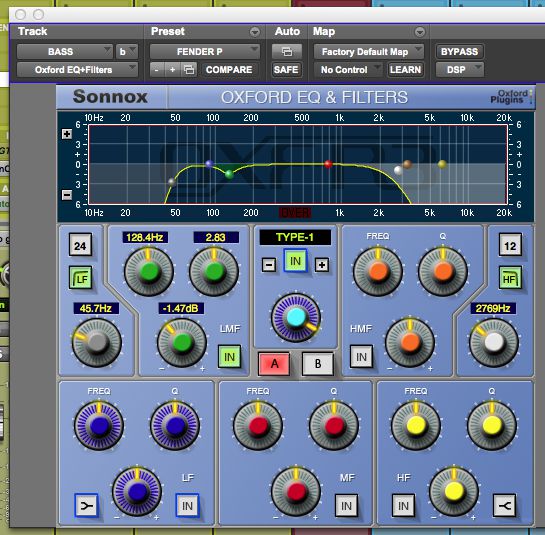 As I mentioned above, I like to treat my bass with EQ and dynamics after it's been recorded as cleanly as possible. As far as EQ goes, I have a variety of presets to fit the needs of each production. One of the first things I tend to do is roll off a lot of the highs, to give it that classic warm tone. I'll use something like the Sonnox Oxford EQ and set the High Filter (HF) to roll off frequencies above 2500-3000 Hz. Then I will typically cut a bit in the same frequency range as the kick boost (usually around 120 Hz or so '" allowing the kick to punch through.

For me, I'll also roll off the very bottom end with a filter to keep things clean '" around 50 Hz or so. You wont hear most of that anyway in the mix. Sometimes, I will boost frequencies around 80 Hz or 130-140 Hz a bit if need be, but that usually depends on the bass itself '" the classic old P basses tend not to need it.

Tip 6 - On the Way Out Compression

Compressing or limiting the bass can help smooth out the overall sound and keep any odd notes in line. My old P has certain notes that record louder than others (don't ask me) and I'll turn to a simple classic such as the LA-2 Leveling Amp.

There are a lot of good LA-2 style plug ins out there, and I happen to prefer the Universal Audio versions. By pushing up the Peak Reduction until the needle just starts to move (when viewing reduction), the bass won't be hitting it too hard and squashing too many transients. Then I'll turn the Gain up to make up for any compression reduction and get some boost that way. It's also great on fingered bass parts to keep things punchy and even.

When you want to add some growl and beef to your bass parts, the Sans Amp PSA-1 is just the tool. I have a handful of easy presets to call up that get me started. With the Drive and Pre-Amp turned up, it's perfect for hard rock and metal. Sometimes I'll cut the High EQ to smooth things out, but sometimes I boost to accentuate pick attack. Be careful with the Low EQ, it can get muddy. Often I will turn up the LOW a bit but cut choice frequencies (around 60-80 Hz) after it with a separate EQ, allowing me full control over the bottom. And with bass, it's all about the bottom!

If you have any bass guitar production tips of your own to share, let us know in the comments below.