Language
A great vocal can turn a good track into an amazing one. Here are some tips for processing your takes for awesome results'¦
Prev 1/6 Next
11. Compression is King 22. Consider a Processing Suite 33. Create Harmonies 4 4. Delay Can Replace Reverb 55. Vocoding Needn’t be Cheesy 66. Play with Panning

Your DAW will come with a decent compressor

You may be aware of the necessity of compressing a vocal, but it’s important to do it in the correct way. Compression reduces the dynamic range of a sound and this is especially crucial with vocals where a track might run the gamut from close-up whisper to top-of-the-lungs belting. Without compression the quiet signal would be inaudible against the rest of the track, and the loud part would distort horribly.

Since most peoples’ voices don’t span the whole frequency range—they don’t usually cover deep bass all the way to screaming high notes in the way that a guitar can—then a single band compressor is usually enough when combined with some proper EQ to deal with proximity effect. Male voices in particular often need some of the bottom end rolling off to make them sit properly in a mix without interfering with bass instruments. Set your threshold control so that it catches the peaks but doesn’t overly squash the signal, and use a relatively fast attack and slow release to help it sound more natural. As ever, the exact settings will depend on your track. 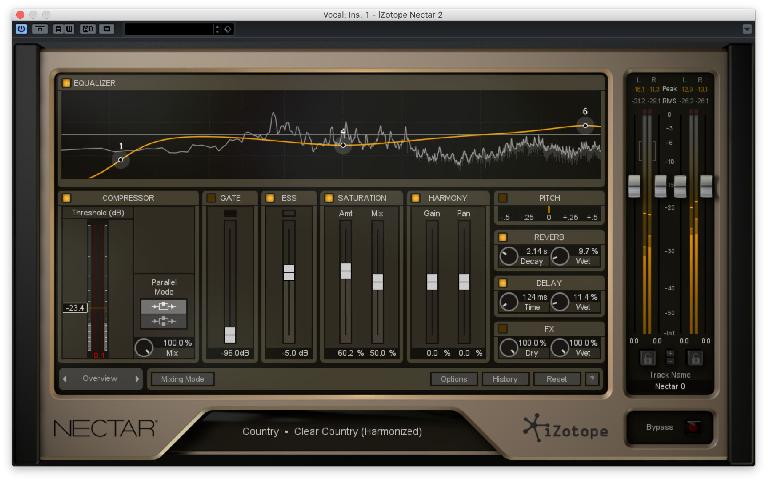 A processing suite like Nectar contains specialized tools for vocals

It’s possible, of course, to layer up several plug-ins on a vocal track to get the results you need, but there are all-in-one suites out there designed to make your life easier. One of the best is Nectar from iZotope, which has a bunch of stages including pitch correction, de-essing, compression, gating, EQ and limiting. There’s a cheaper version called Elements if your needs are more modest. As well as having handy presets that can save you time, features like gating are perfect for vocals and can be used to set the gate to close or open whenever a threshold is reached. In practical terms this means that when your vocalist isn’t singing, the gate closes and silences the track. Used carefully it can automatically get rid of breath sounds and background bleed from a vocal track.

Not so long ago, creating harmonies meant having to record them live. But if your singer isn’t around or you’re working on a different setup, this may not be possible. Advances in sampling technology mean it’s now possible to create harmonic accompaniment from an existing vocal take with no issues around pitch or timing arising from the file conversion. One of the best implementations of this is in Cubase, which has a “Generate Harmonies” function directly in the Project window. In other DAWs it can be done by using inbuilt pitch shifting features like Logic’s Flex Pitch, to duplicate a part and then literally reassign the individual notes to new ones that work as harmonies. This technology is not unlike that found in tools like Melodyne, which also allow direct note access to pitch and even micropitch. Creating harmonies at the right interval (2, 3, 5 notes or even an octave higher than the original) can really make a track sound richer. 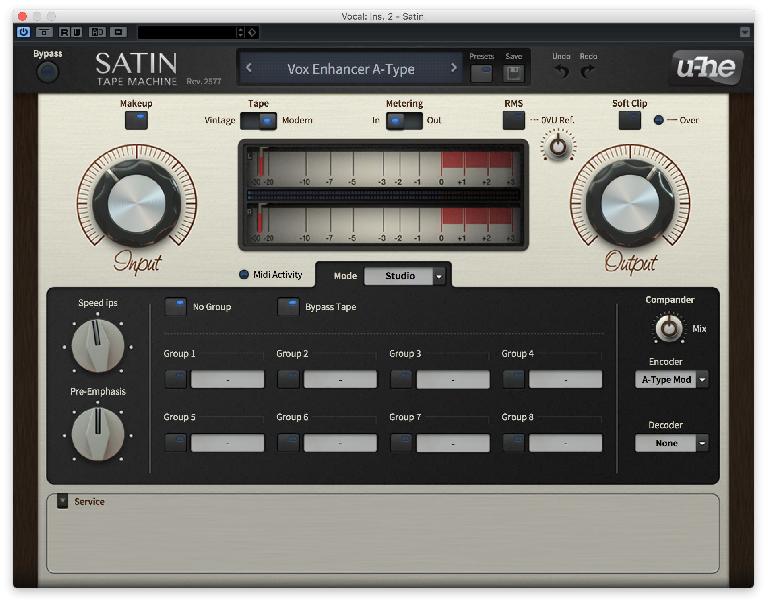 Some short delay can work wonders on vocal tracks

Reverb on vocals is sometimes considered an essential part of any production and in many cases that’s true. One issue with reverb, however, is that it very often adds too much “splashy” top end, especially with sibilant “s” sounds. If you’re recording a ballad that might be fine but for other types of music, it can sound too washy and introduce too much space to the soundstage. One common trick, especially with hip hop and all kinds of electronic music, is to use short delays instead of reverb. This “thickens up” the vocal by adding short echoes and adds a sense of depth and space but without adding it at the top end, which reverb tends to do. It’s usually advisable to use short delays and a fairly low dry/wet blend so the effect is subtle rather than too upfront. You want it to add depth without it being really obvious that delay is present. 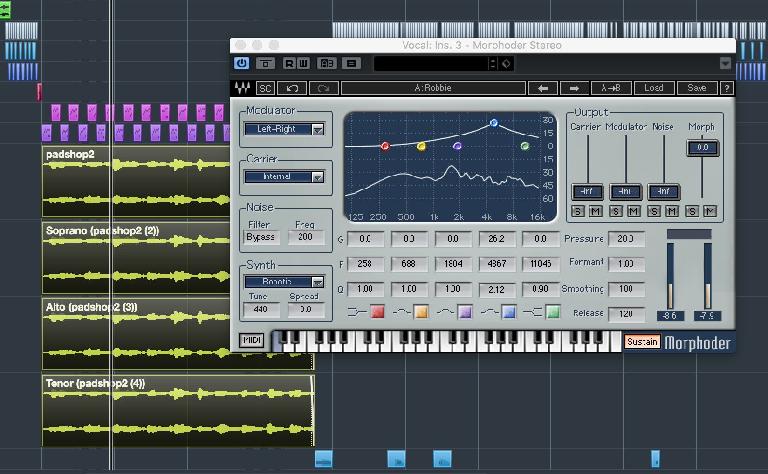 Waves’ Morphoder is a great vocoder, though there are plenty of alternatives.

We’ve all heard what it sounds like when vocoding is used in a very predictable way: Daft Punk and T-Pain being obvious examples. It’s not necessarily bad, it’s just “that robot voice” effect. Software vocoders are very accessible these days, but they can be used much more creatively than just making you sound like a Cylon. Many let you use voice synthesis to create much more interesting synthesized vocal effects and play with formants. You can blend a little of the synthesized signal with a clean vocal for a more subtle effect, and “play” your voice as an instrument, as you can hear on “Get Lucky”.  Combined with other effects like extreme time or pitch shifting you can make regular vocals sound like otherworldly instruments pretty easily. 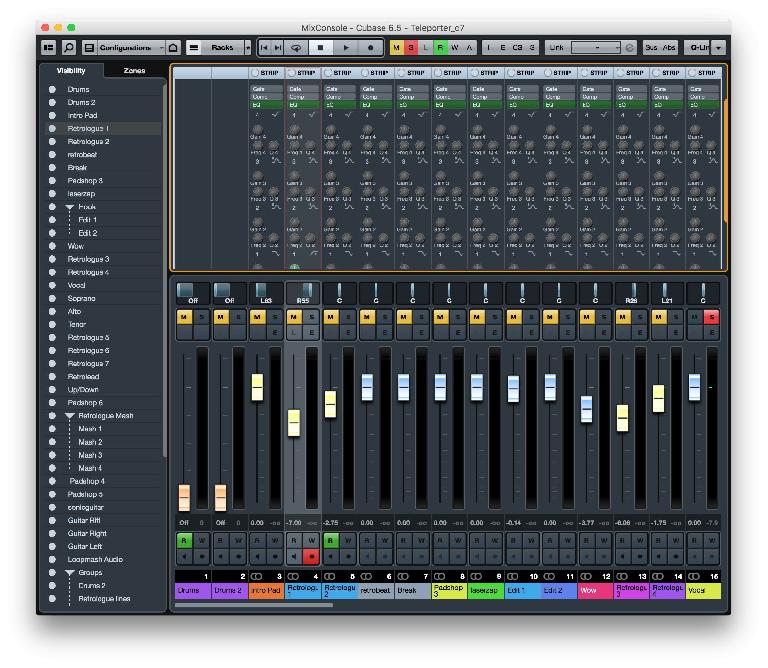 Panning and EQ are important tools for working with vocals and both are available right in your mixer.

This is one of the easiest yet most effective ways to liven up a vocal track and all you really need is the panners in your DAW’s mixer or on your desk. While a lead vocal should generally be panned centrally so that it has focus and power, additional vocals can be panned to enhance the soundstage and create more dramatic effects. This can be duplicated sections of the lead vocal, spun off to other audio tracks and then panned, or ad libs in hip hop, or harmonies in any kind of music. Hard panning left or right can sound a little jarring unless there’s a good reason to do it, so think about panning to around 10 and 2 o’clock. This should beef up the effect of the combined vocals and will also help you to add separation between the lead and additional vocals by placing them slightly differently in the stereo field. These kinds of effects usually have the most impact when used sparingly rather than all the way through a track.

Take your mixing skills to the next level in The Ask.Audio Academy here.