Language
You can have the most awesome recording gear and mixing plug-ins in the world, but what's the point if your studio monitors are not up to scratch. Joe Albano shares 6 tips for effective monitoring.

We all put a lot of effort into assembling the gear for our recording rigs, trying to find the best (not to mention the most affordable) mics, outboard gear, DAW, and instruments (both real and virtual). But sometimes, one component gets a little less attention than it should—the studio monitors. Often, people use whatever speakers they may have lying around, or make a choice based on something they heard and liked in some other studio, without really doing their due diligence to find the best solution for their own setup. Virtually every decision we make in recording, mixing, and mastering is based on what we hear through those monitors, so it's worth it to spend a little extra time and effort to make the best choice possible, when it comes to this all-important piece of gear!

I've put together a few key considerations and tips for choosing the best monitors for a studio setup. While we may not always be able to afford our first choice when it comes to speakers, there are many excellent options at any price point, as long as they're well matched to the room and application.

Many consumer speakers are designed to make everything played over them sound good, or at least better—they often pump up the high and low end for more oomph and sparkle—but studio monitors are designed for a different purpose. They must be as neutral as possible, to provide the engineer and mixer with an accurate, un-hyped reference of what recordings and mixes sound like, not only in that room at that moment, but what they'll sound like on other playback systems as well. It can be tempting to choose monitors that enhance the sound, but ultimately they won't serve their purpose properly, and mixes will be likely to “travel” poorly—they'll sound good as you make them, but very different over other playback systems that don't share the same hyped quality as the monitors that provided the reference.

A lot of music listening nowadays is done on headphones, from the high-end closed-ear phones found in studios, to the inexpensive earbuds that come with portable music players of all sorts. While recording live parts—like vocals and acoustic instruments—the musicians naturally use them as a reference, and so it might sound like a good idea to use them throughout the process, for everything from tracking to mixing. They cut down on issues of sound leakage, and excellent models can be had for a more moderate price than speakers of comparable quality.

But headphones don't always reveal everything we need to know about our tracks, and mixes made exclusively over phones often don't translate as well when heard by others, over speakers. Headphones may give a misleading sense of how much low end is in the mix, which can result in bass-heavy or bass-shy mixes. Thanks to the isolation of the left and right stereo channels to the left and right ears, respectively, headphones provide a different experience than speakers, where both left and right sides of the mix are heard by both ears. 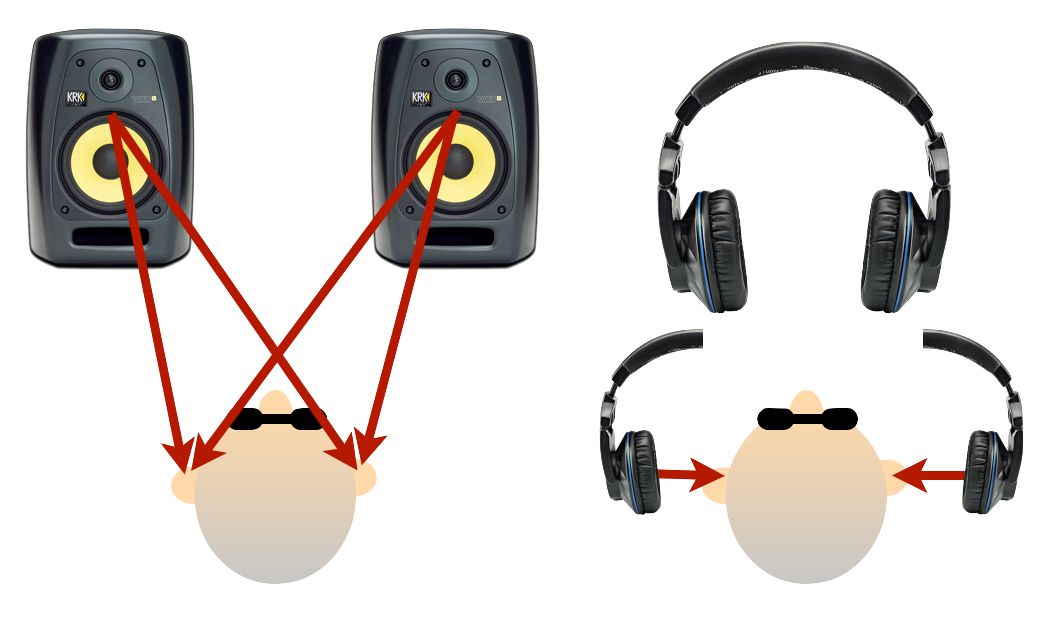 The difference between speaker and headphone monitoring.

Busy arrangements with lots of subtle background elements may sound much clearer in phones than they will over speakers. Since the goal is to end up with mixes that sound good on a wide variety of playback systems, the best approach is to mix on good, accurate speakers, but check the mix on headphones as well.

Most pro studios have multiple monitors available—a large pair, usually wall-mounted for cranking up the music, a smaller console-top pair for close listening for detail, and often an even smaller, low-end pair, as a reference for what the music might sound like when heard in less-than-ideal consumer listening environments. If the budget allows, it's always a good idea to have one pair of monitors for the majority of listening and another pair that can be used periodically as a reality check.

The larger wall-mounted monitors really need to be installed with the help of room analysis and test equipment for truly accurate response, so if you can afford only one really good pair, medium-sized console-top monitors might be the best way to go. They can be positioned to allow for near-field monitoring, where the listener is around three feet from the speakers, which minimizes distracting reflections from less-than-perfect room acoustics, providing a more accurate reference, while still offering good solid bass response (especially from 8” woofers).

In near-field monitoring, the listener is positioned around three feet from the speakers.

Besides having a larger system available for occasional reference, a pair of smaller, often single-driver speakers are often used to get a sense of what the mix will sound like on low-end playback equipment. The standard for this used to be a model from Auratone, but nowadays any computer speaker will do.

Traditionally, engineers used to take mixes in progress out to their cars to check them on the car stereo—the environment where many people would first hear songs on the radio. These days, that first-contact experience would more likely be on a set of earbuds, so having a couple of headphones handy is also recommended—a good high-end pair (which would probably be available anyway, as they'd be needed for tracking), and a set of earbuds, for a sense of what the music will sound like to all those people who go through life glued to their MP3 players.

Monitor speakers are available in two varieties—active and passive. Traditional passive monitors are just speakers, requiring an external power amplifier. More common nowadays, active monitors have the amplification built into the cabinet(s). In theory, whether a speaker is active or passive should have no direct effect on its quality or tonal balance, but passive speakers, which—all other things being equal—will naturally be slightly less expensive, require a bit more effort on the part of the buyer to match them to an amp with the appropriate spec and power rating.

Most small-to-medium-sized studio monitors nowadays are active, and usually bi- or tri-amplified, with separate built-in amplifiers for the woofer and tweeter (and midrange, if applicable). This approach typically provides the best powering option for the design, and insures an appropriate match between amp and speakers, freeing the buyer from having to deal with considerations like impedance and power handling. Overall, a set of powered speakers is probably the best way to go these days for studio monitors (live is another matter, but that's not our concern here).

Low-frequency issues are often the biggest problem faced by smaller studio environments. Standing waves (a.k.a room modes)—inconsistencies in bass response at different frequencies—plague all smaller and medium-sized rooms, and on top of this, the specific placement of the monitor speakers, in any room, may result in inaccurate bass response. When a project is mixed, often decisions as to balance and EQ are made more to compensate for room and speaker issues than for the reasons they should be made—to address issues in the mix itself, not the listening environment. These choices then make the mix sound worse on other playback systems, again, making the mix “travel”poorly.

One aspect of this is speaker placement—there's always more bass, and usually more uneven bass, to boot—when the monitors are placed next to a room boundary, like up against a wall, as opposed to being free-standing, like atop the console. Studio monitors can be designed to offer better, more accurate performance in one position or the other, and if placement options are predetermined, for whatever reason, you should check to see if a particular pair is designed to offer the best sound in that environment. Many speakers offer switchable filter and EQ to compensate for placement: “full-space” would be for console-top, free-standing placement, while “half-space” would optimize the response for wall-placement. While it can be tempting to misuse these options to increase the bass response of a smaller speaker, it would be at the expense of accuracy. 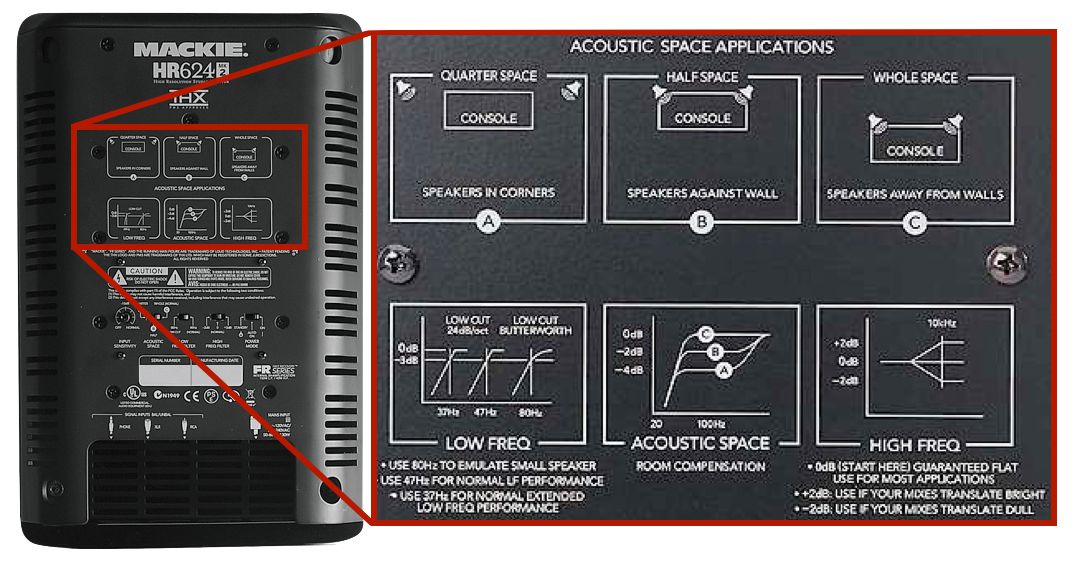 Most small-to-medium-size monitors, with 5”/6” to 8” woofers, have a bass response that tends to roll off somewhere between 50–60 to 80–90 Hz or so (higher for those really small “satellite” speakers). If you feel your monitors sound great but are a bit too bass-shy, and don't provide a good-enough reference for what the low end of the mix will sound like on larger systems, cranking up the bass EQ, or pushing a console-top design up against a wall are not good solutions. Instead, the best approach would be to add a subwoofer, which will augment the bass response of the main speakers by adding in the lowest octave, usually below 80 Hz. Most subs are powered and include the connections for the main speakers along with the crossover to re-route the low frequencies to the sub.

Since low frequencies are non-directional—our hearing system can't tell where they're coming from—one subwoofer is usually fine for a stereo pair of monitors. Placement is non-critical as far as the stereo field goes, but the sub should be placed in the recommended room location (free-standing, wall, corner) that will provide the most accurate low-end response. And remember, it's a SUB-woofer, not a bass booster—it shouldn't be adding to the bass that's already there, it should be adding in the lower frequencies that are missing from the main monitor pair!

And on that (low) note, I'll wrap up this piece. Choosing and setting up the studio monitors for the most neutral, accurate sound is probably the single most important thing any engineer or producer can do, so this is one area where it just doesn't pay to cut corners. Having an optimal monitoring environment will make everything sound better, not just in the studio itself, but for listeners everywhere who'll be enjoying your musical productions!