Language
The deeper we delve into the digital direction for music production, the more we seem to crave that analog, unpredictable, warm treatment for our sounds. Joe Albano shares 6 ways to achieve this.

Over the years, the technological march of progress has seemingly spelled the death knell for older designs, only to see those older approaches rise up, like some kind of technological Phoenix, and stand tall once again. Transistors replaced tubes, at least in general use, but tubes never really went away. And digital technology replaced analog. And ever since, we've been chasing the holy grail of analog sound, trying to capture it for our pristine digital recordings, both with the use of real analog hardware—vintage gear and re-issues—and, currently, with plug-ins that emulate the famous warmth and presence so prized in the recording kit of yesteryear.

“Analog warmth”—the very quality we prize so much—is really the result of the myriad imperfections of analog circuitry, but we've come to recognize that those imperfections add something of value—both depth and liveliness—to the audio, that digital, with its numerical precision, just doesn't offer. This quality comes from a variety of sources.

Tube overload, of course, adds a pleasant edge when pushed just a little, the very slight distortions enhancing the signal long before they're noticeable as actual distortion. But Transistors do this too, and well-designed transistorized analog circuitry can also add its own version of that warmth and presence. Even Transformers, employed widely in classic analog gear, can be another source of beneficial non-linearity. All in all, these components, while simply doing their basic jobs, impart that euphonious edge to the analog hardware they inhabit. And don't forget, analog (magnetic) tape itself has always contributed a unique touch of compression and distortion, called tape saturation, when recording levels are pushed into the red.

In the early days, plug-ins often tried, but failed, to capture that sweet sheen of subtle analog warmth, but nowadays they succeed in having it in abundance! Modern computer power has allowed for the use of modeling technology, where the plug-in designers analyze the original hardware for its analog magic, and then recreate it in software code—sometimes circuit-by-circuit and component-by-component—assembling it all into a virtual simulation that both sounds and behaves identically to the original. Currently, there are tons of excellent plug-ins that provide analog warmth and presence, either as a companion to the primary type of processing they do (compressors, EQs), or as the main event.

Whenever you see a photo-realistic front panel in a plug-in, it's likely that that plug is a Modeled version of the original hardware pictured. But even plain-jane plug-ins offer up this kind of tech, with less fanfare. Lets look at a few of the options.

Bridge the analog-digital gap with UA

Universal Audio straddles both the analog and digital worlds. As the current incarnation of the company & designers that were responsible for many of the original classic pieces of analog audio gear (Teletronix LA-2A and UREI 1176 compressors, for example), they offer hardware re-issues of these vintage pieces (and others) that capture the sound and vibe of the originals. But UA also makes plug-ins—in fact, they offer one of the largest collections of (DSP-powered) plug-ins that emulate the sound (and operation) of specific pieces of vintage analog gear.

UAD has so many plug-ins on tap that simulate the elusive warmth of analog gear, that it's hard to know where to begin. 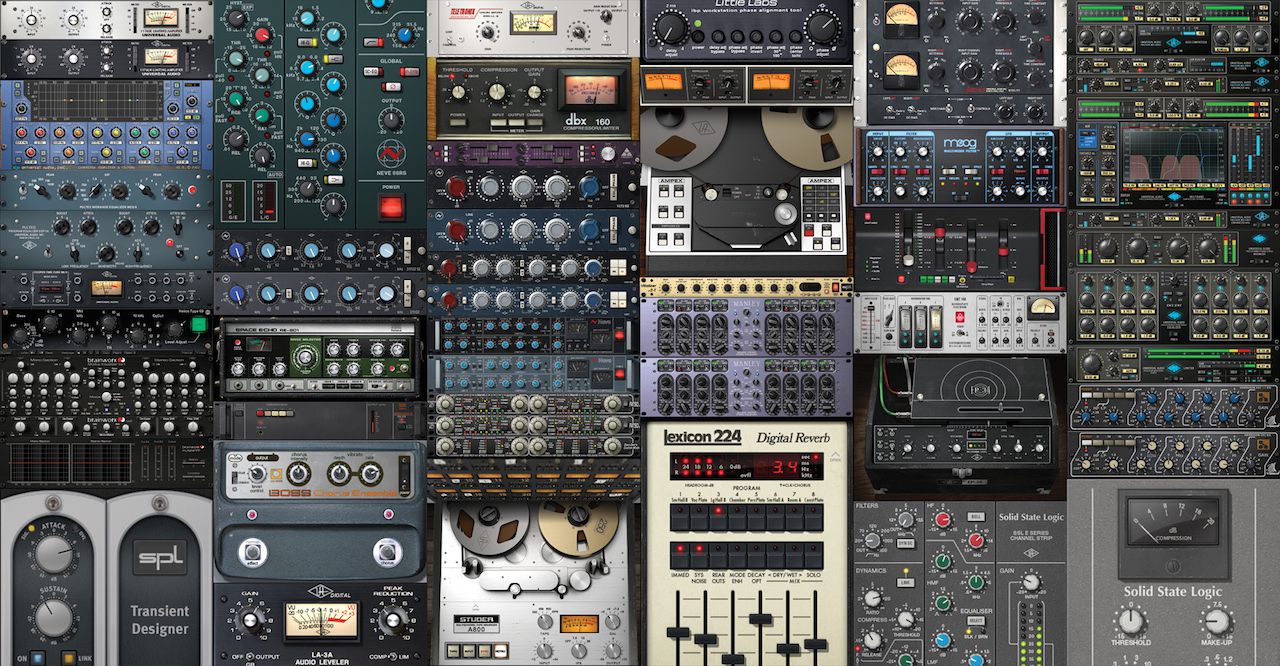 The most classic examples are the plug-in versions of the aforementioned vintage compressors, the LA-2A (tube warmth) and 1176 (FET transistor edge), along with their virtual Fairchild 660/670 compressor (tubes and transformers), and the most revered of vintage EQs, the Pultec EQP-1A (again a collection of tubes and transformers than can warm up the signal even without dialing up obvious changes with the EQ). There are also simulations of classic console EQs and Preamps, like the Neve 1073, the EQ section from Neve's classic British consoles, which gets its warmth from transistor circuitry. UA even integrates this plug-in with their DSP-enabled interfaces, using the simulation to color recordings made with the actual onboard mic pres. There's also an emulation of Tape Saturation.

Simulating the unique compression and overload characteristics of analog tape is the latest trend in analog emulation. For years, this proved the most elusive of effects, but these days, there are a large (and growing) number of plug-ins, from various companies, that do a good job of capturing the subtle non-linearities of magnetic tape recording that contribute to that sought-after analog experience. Besides UA, Waves has several emulations of specific vintage analog tape machines (more on that below), and many other companies (see below) have plug-ins that don't necessarily Model a specific tape machine, but simulate the typical characteristics of the medium.

Tape Saturation—the gentle compression, especially of transients, and the subtle distortion that you get when you push recording levels into the red—is the primary aspect of tape emulation. But the other quirks of analog recorders are also reproduced in many of these plug-ins, like the slight wow-and-flutter (pitch variation) endemic to tape, and even the noise and frequency-response irregularities (like head bump, a rise in lows that can add a little fatness).

There's probably no recording studio more associated with the sound of classic analog recording than Abbey Road, which gave us the collected works of the Beatles and Pink Floyd, not to mention the countless other music and post-production work that's come out of these storied studios. Many of the modern recording techniques we all take for granted originated in sessions here, like the use of tape recorders for ADT (Artificial Double-Tracking), and their unique collection of gear, like the EMI REDD consoles and the Studer J37 four-track (of Sgt. Pepper fame) that captured much of the Beatles' output.

Anyone looking for a set of plug-ins that will add that magic analog touch need look no further than the Abbey Road Collection, developed by Waves (in partnership with Abbey Road). This collection of plug-ins includes meticulously Modeled versions of those classic pieces I just mentioned, from the analog (and musical) heyday of Abbey Road, along with emulations of the studio's passive RS56 EQ (affectionately known as the “Curve Bender”), and even some offbeat vintage microphones.

The plug-ins allow for detailed adjustments to all the aspects of the simulated hardware that contribute to the effect, and seek to capture the unique quality of the Abbey Road sound—their specific versions of these (now-familiar) effects, that are immediately recognizable on Beatles (and other) recordings.

Find your bliss on a budget

But don't think that to get some analog sugar you need to mortgage the house (or the studio). While I've mentioned some of the bigger, high-end bundles and suites of plug-ins, there are plenty of options for those on a budget, including freeware. Often, these plug-ins forego the expense of modeling and licensing the rights to the names and images of specific hardware pieces, instead creating simulations of the generic type of desirable effect that that hardware is known for.

One such company is the Polish software developer PSP, whose well-respected product line includes many plug-ins that include simulation of the analog warmth of Tubes and Tape, like the popular Vintage Warmer compressor, and the Mix Saturator, whose sole purpose is to add that analog sheen. URS (the software arm of the former Unique Studios in NYC) makes a whole range of plug-ins that emulate vintage analog gear, and Massey offers simple versions of classic effects (compression, EQ, saturation) at not only true budget prices, but in free (though feature-limited) versions as well.

So don't despair—the analog cure for those digital blues is just a mouse-click or two away. Just remember, “analog warmth” is a subtle character, not a special effect—it's all too easy to overdo it with these plug-ins, and too much of a good thing is… well, not such a good thing! But used judiciously, these kinds of plug-ins can add some of that warmth and sheen that makes a mix really come together, and that's what we're all after.

thanks for this article, it really brings some ways to get back to what I call 'sound' that is life.
Do you have some recommendation to get this analog warmth on an external DAC from a smartphone while playing anything throught the USB / lightning port? Same on a Mac playing digital formats? Finding a player or a plugin enabling the analog processing in realtime would be a life saver as through the USB from my smartphone all the warmth has to be recovered.