6 Tips for Getting The Best From Sampled Instruments

Language
The once simple sampled instrument has steadily been evolving and today these instruments are larger and more accurate and expressive than ever. Here's 6 tips for getting the most from them.
Prev 4/6 Next
1Page 1 2Page 2 3Page 3 4Page 4 5Page 5 6Page 6

Acoustic instruments have a lot of tonal variety—even hitting the same note repeatedly will produce variations in tone and attack. Many modern sampled instruments take this into account, with round-robin or randomly alternating samples of the same notes (like slightly different snare drum hits from the same drum), to bring this natural variation to virtual instrument performances. While this is often programmed into a patch, the player may sometimes need to be aware of it to take full advantage—for example, if multiple variations of snare hits or closed-to-open hi-hats are provided, the player/programmer may need to divide, say, hi-hat figures among the different keys (with the different sample variations), or make use of modwheel crossfading to access the variations appropriately. 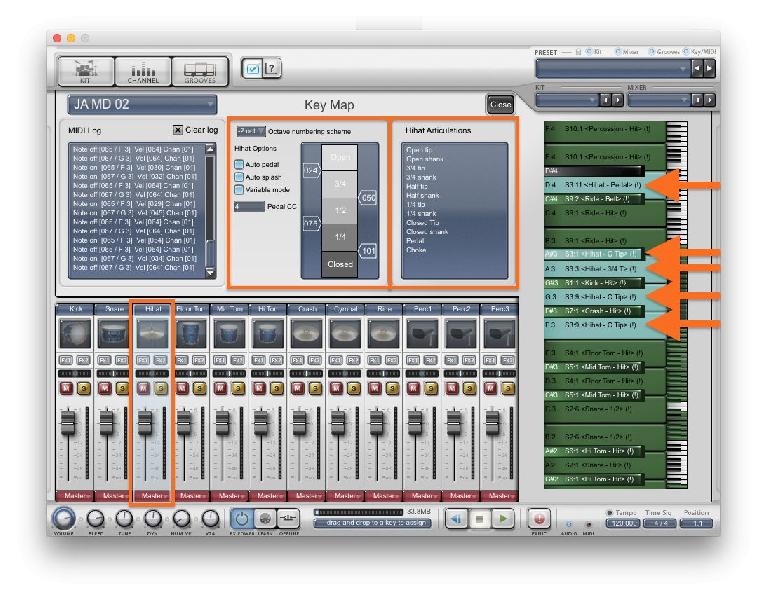 Legato playing is one of the most important performance techniques to get right, especially for string and wind instruments. Just a reminder, legato is where the player plays a new note without re-triggering the current note, like a guitarist doing a hammer-on, a wind player changing notes by fingering, while blowing continuously, or a string player changing pitch without lifting the bow and restarting the note(s). This is often emulated by the instrument via a monophonic Legato performance mode—when a note is played while the previous note is still held, the pitch is changed to the new note, without retriggering the attack portion.

Audio Example 2—A sampled bass making use of the sampler’s Legato playback feature:

However, you have to be careful—this feature may introduce glitches with sampled instruments. If a new legato-played note switches to another sample, there may be a click, from the waveform discontinuity. If it instead simply transposes the existing sample, the tone may become unnatural, due to munchkinization (a.k.a. the “chipmunk effect”, from transposing the sample too far from its (original) root key). Sometimes the best legato effect is achieved by setting at least two-note polyphony, and allowing just a very slight amount of overlap—not enough to actually hear two notes together (from what’s supposed to be a monophonic instrument), but enough to smooth over any clicks between different samples, while preserving the most natural tone (like a crossfade).

Orchestral libraries often go to great lengths to provide samples of legato note-to-note transitions, that are triggered automatically during legato playing, but not every library has these, and not every patch includes them (“light” versions of an instrument may omit them to save RAM/CPU overhead). A little attention to legato can go a long way in achieving greater realism and musicality.

Another performance gesture that’s often the weak link in a sampled sound is vibrato (and tremolo)—that musical “shake” that puts the feel into held notes in just about every musical genre. There are so many ways this can trip you up. A lot of sampled instruments employ artificial vibrato, generated by an LFO, under the control of the modwheel—raising the wheel increases the intensity of this mechanical vibrato (or tremolo), but the regularity of the effect is usually a dead giveaway that it’s not a real performance gesture. The other approach is to sample the player’s natural vibrato, which will always sound richer and more musical. But there are plenty of potential gotchas here too. If there isn’t a separate vibrato sample for every note, the vibrato may speed up or slow down unnaturally from note to note, as a single sample is transposed.

Audio Example 3—A sampled cello with recorded vibrato, which speeds up unnaturally when individual samples are transposed:

If the played vibrato in the sample kicks in quickly, that can be a problem when longer notes without vibrato are required, or a quick runs of notes—which would normally be played sans vibrato—reveals the vibrato in the samples, which sounds musically inappropriate. And sometimes, the player’s vibrato is just too much for a particular situation, but you’re stuck with it.

The best option (available in many of the bigger orchestral libraries) is to have vibrato and non-vibrato versions of every note, which can be crossfaded via the modwheel. But, besides the larger RAM footprint, this requires that every pair of samples be phase-aligned, or you’re likely to hear nasty phasing when crossfading into and out of the vibrato effect. Another option is to invest in one of the newer controllers that allow for natural finger vibrato to be performed by the player. This may be the way of the future, but few controllers offer this currently, and the ones that do may require the sounds to be re-programmed to take advantage of it—not really that difficult, but outside the comfort zone for many users.

Sample instruments that get most of their tonal variation from velocity—how hard the notes are played—are easier to set up for natural sound and response—the obvious examples here are sampled drums, percussion, piano, and other keyboards. But the best results may still require a little attention from the user. Most instruments utilize velocity-switched samples, so different velocities trigger different samples with the appropriate tonal variations. But this doesn’t always immediately work as well as it needs to. Different keyboards and drum pads have different velocity curves—how much force is required to generate the different velocities. Some keys are so light that as soon as the player starts to hit a little harder, the velocities max out (at or near 127), making it difficult or impossible to trigger the samples of the softer hits, effectively resulting in a lack of musical dynamics. The opposite may also be true—if the keys are too heavy, it may be impossible to comfortably generate the highest velocities—if the instrument correctly assigns the loudest, punchiest samples to those highest velocities, this may result in what sounds like a low-energy, lackluster performance, again, without appropriate musical dynamics.

This issue is actually very common. To deal with it, there’ll need to be some Velocity Scaling applied somewhere between controller and instrument. Velocity curves are often found in the controller itself; if not, there may be controls for setting the velocity response within the instrument, or a MIDI plug-in/processor in the DAW that can be inserted, feeding the instrument, that will allow for any necessary scaling of a problematic velocity curve (which will simply be done by trial-and-error). Another approach, if the sampled instrument makes use of multiple velocity-based sample zones, could be to re-program the velocity-transition levels, but the Velocity Scaling solution is 1000 times easier and more practical.

Real—physical—acoustic instruments are mechanical in design, and so they generate a whole host of subtle mechanical noises when played. These are part of the instrument’s tonal signature, and their absence, in some less-comprehensive sampled instruments, can subconsciously make the virtual instrument sound somewhat bland or sterile. The better instruments often include these, but they’re not always enabled by default, or they may not be set at the best level (too soft and they’ll be buried in the track; too loud and you may end up with what sounds like an old, broken-down instrument on its last legs).

These little bits of ear candy might include piano pedal noises and soundboard resonance (most modern virtual pianos incorporate these, especially resonance, which is an integral part of the sound of a real piano), hammer noise (electric pianos are often enhanced with the subtle sound of the mechanical tines), and breath and key clicks (an aspect of the sound of all wind instruments), among others. Making sure that these are audible to just the right (often subliminal) degree can really help maintain the illusion of an actual acoustic recording.

It’s become common for sampled instruments to include multiple performance articulations, when appropriate. For example, orchestral string players can play with the bow normally, or with short strokes, or with the wood, or up by the bridge, all of which produce distinct, different tones; they can use mutes; and they can employ performance techniques like tremolo and trills. The best sample libraries (and lately, even some basic starter libraries) will include separate layered sample keymaps for some or all of these. To switch between these different articulations, the typically unused keys in the lowest octave of an 88-note keyboard are most commonly appropriated for use as switchers—the last of the keyswitches tapped determines the currently-sounding articulation keymap. But users with shorter keyboards that don’t include those keys may not even be aware of all the extra sounds lurking under the hood. When getting to know a sampled instrument nowadays, it’s important to do a little due diligence, and make sure you’re aware of and able to access any alternate articulations, if you really want to get the most of out it.

And that’s all the room I’ve got. Sample-based virtual instruments are better than ever, but as they get more elaborate, they may require a little homework by users who want to get the most out of all their cutting-edge capabilities. It might take a bit of work to master the use of playing techniques that take fullest advantage of the expressive capabilities designed into a sampled instrument, but the musical results will be well worth the extra effort.

Learn about building your own sampler instruments in Kontakt here.