Language
So you want to record electric guitars? Or perhaps you've been doing so for many years already. Here's 6 mishaps, pitfalls and errors to avoid to help you get better results.

Capturing the electric guitar is one of the more straightforward recording tasks, but there’s still always the possibility of getting better results by avoiding a few possible pitfalls and potential bad habits. Here are some suggested “don'ts” when it comes to recording guitar.

The simplest, and probably the most common approach to miking up an electric guitar amp is to get up close, with a dynamic mic (like the classic Shure SM57) an inch or so away from the cabinet’s grille. But while this is good for isolation, it may not provide the best, or most open, sound quality. Many cabinets don’t deliver their most balanced sound at that distance, and, unless the amp’s internal reverb is employed, the dry quality of the resulting recording will lack depth and air. If the acoustic environment is good, and leakage is not an issue, capturing a little of the natural ambience in the room can often provide a greater sense of openness and three-dimensionality to the track than adding artificial reverb later. Employing an additional mic (a condenser would be a good choice) at a slightly greater distance (a foot or two) can preserve some of that natural ambience, and if it’s printed to a separate track, this natural room sound can be blended with the close mic in the mixing stage, giving the mixer greater control over the apparent depth of the part in the arrangement. If the amp is cranked, this will capture not only the direct tone, but the sound of the room being driven hard, which can greatly enhance the excitement of the performance. 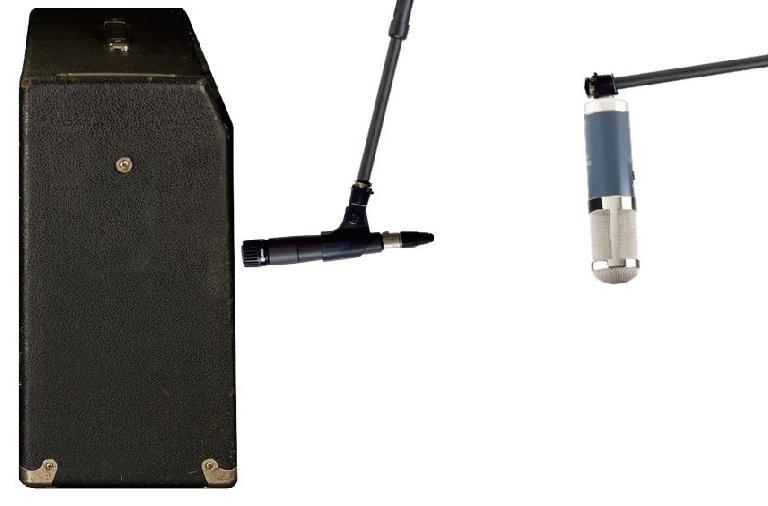 Fig 1 Combining a close mic with a more distant mic can provide better depth and air.

Audio Example 1 A guitar amp miked-up with A) a close mic; B) a distant mic; C) both together:

2. Don’t forget to move around

When a mic is placed only a inch or so from the sound source, significant tonal differences will result from even slight variations in position. It’s logical to start off by positioning the (close) mic dead on-axis in front of the center of the speaker (pointing at the dust cap), but this will often result in a very bright, often peaky tone, that may make some notes jump out too much, and which will require a fair bit of EQ later on to make the track sit well in the mix, without sticking out inappropriately. Moving the mic off-axis can smooth out the response considerably, and offer a more balanced tone, needing less tweaking later on. Shifting the mic from the center to the edge of the dust cap should have a noticeable affect, and for an even less peaky sound, moving it further, to a position somewhere between the center (cap) and the edge of the cone (the surround) can further mellow out the tone. The most evenly-balanced tone may be found with the mic pointing at the edge of the cone—the surround. At any position, you can also angle the mic, instead of having it point straight in at the grille, which is another way of achieving an off-axis coloration. 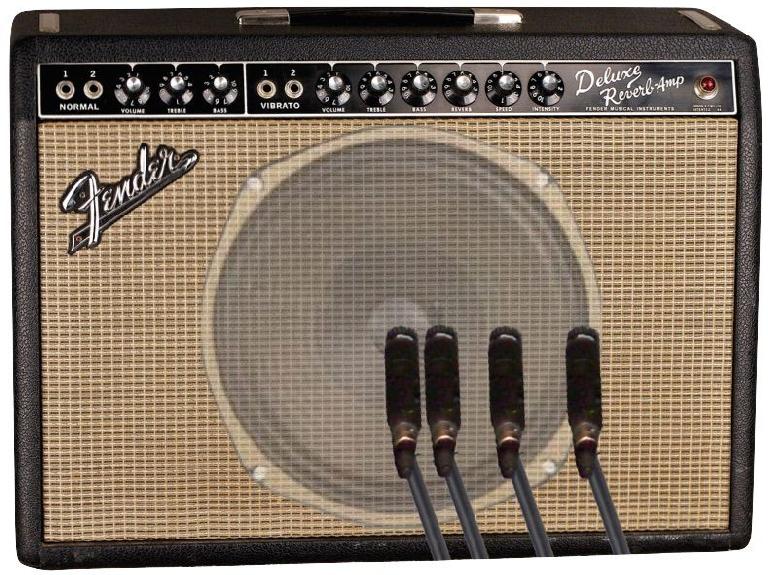 Audio Example 2 Variations in sound between on-axis and off-axis mic positions (as per Fig 2, L to R):

Depending on the sound of the guitar, the pickup used, and the settings dialed up with the amp’s tone stack, very often one of these off-axis placements will provide a much better, more suitable tonal balance. Keep in mind that, when the player dialed up his tone, he/she was likely standing off axis to the speaker(s), so off-axis miking may provide a balance that’s truer to the intended tone. A little experimentation will give you a good sense of the differences to expect—even if you don’t always have a rig handy, most amp simulators include a virtual mic and cabinet, and let you move the virtual mic around, emulating the tonal variations that this will produce in the real world.

While a lot of guitar amps have only one speaker, many have two or four. For quick and easy recordings, miking up one of the speakers is usually all that’s required, but sometimes that’s not the best—or only—approach. While multiple speakers are typically employed simply for volume and power-handling considerations, they do affect the sound wave the amp is putting out. The sound picked up by a mic an inch from one speaker will be different from the sound heard in the room, which will include the subtle phase interference between speakers, and the resulting differences in tonality that result from that, when their wavefronts merge a foot or two in front of the cabinet. This is one reason for using a distance mic instead of or in addition to a close mic. This is especially true with those 4x12 cabinets that are traditionally used with higher-power amps (like the head+cab pairings from Marshall, Mesa-Boogie, Hiwatt, Orange, Soldano, and countless other high-wattage rigs)—you don’t really get the full, rich tone of the amp, as heard by player and audience in the room, unless you capture the interaction of all 4 speakers. Some cabinets even deliberately mix mis-matched speakers (a 10” and a 12”, for example) for the extra complexity this will bring to the tone. And some amps incorporate effects—like the stereo chorus in the classic 2x12” Roland JC-120—that won’t sound their best unless the sound of both speakers is captured. 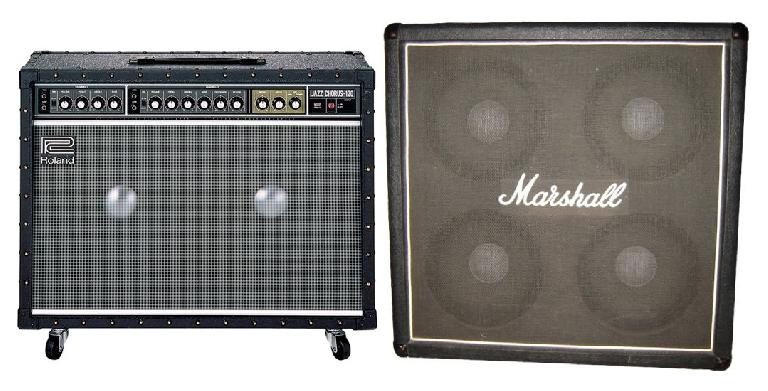 With more and more players incorporating effects into their rigs, you may be presented with a sound that’s chock-full of processing. This may be important to the player, providing the sound needed for the best, or most appropriate performance, but all that processing can bite you in the ass when the mix rolls around—what sounded great in the live room, or even in the control room against a fairly sparse rhythm section, may simply not work well within the full mix. While you want to record the sound the performer has so studiously sculpted, you also need to have an out, in case it just doesn’t work in the mix. You could have the player do multiple takes, with and without any processing you might be worried about, but an easier approach is to split off the signal from the guitar (or from a direct out or effect loop output on the amp, if available), and record that via a suitable DI (direct box) on a separate track (Fig 4). That way, you have the full sound, but if worse comes to worst, you can go back to the dry, unprocessed version of the same performance and re-create that sound with studio effects and a more appropriate effect balance, as needed.

5. Don’t use the wrong input

In line with the previous suggestion, if you do utilize a direct (DI’d) guitar signal (as a backup or as the main signal), don’t compromise the sound you’ll be building later by using the wrong input. The direct signal from a guitar is a very low level signal, that requires a high input impedance (typically 1 megaohm or so), to be transferred to the recording stages properly without any loss of level or dulling/thinning out of tone. That means that, even if the type of connection on the console/interface matches the connector on the guitar cable (1/4” TS, usually), you shouldn’t plug it into a line-level input (or one of those combined XLR/TRS jacks) unless the preamp has an option for matching the level and impedance to the incoming guitar signal. Some do, typically in the form of a switch that adapts a 1/4” input from line level to “instrument” level—“instrument”, in this case, specifically refers to the signal coming directly off the magnetic pickups of a (passive) electric guitar (or bass). Alternatively, there may be separate 1/4” Instrument inputs, which will provide the correct gain and impedance characteristics to handle that guitar signal properly. If no suitable Instrument inputs are available, then a separate DI box (like the various offerings from Radial) will be required—since DI’s come in different varieties, just make sure it’s one specifically designed to handle electric guitar signals. 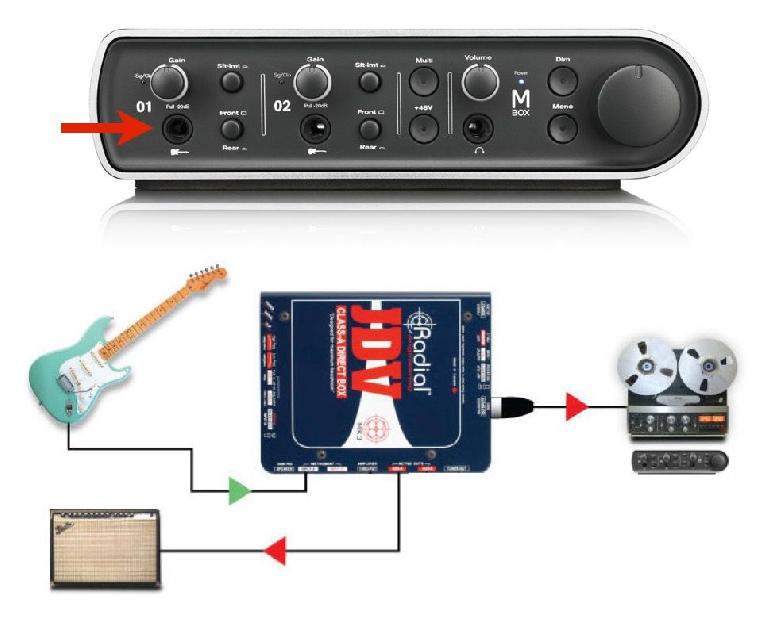 Fig 4 An interface with an “Instrument” input; a DI  (direct box) for electric guitar (diagram courtesy of Radial).

Of course, a lot of guitar tracks nowadays are cut without miking up an amp at all, relying instead on one of the many excellent software amp sims available. As I mentioned, many of these offer a lot of the same options you’d have recording the real thing, for virtual miking, mic choice, distance, and position. Additionally they let you mix ‘n’ match amps and cabinets, and dial up settings for drive and tone, often with controls that precisely emulate the behavior of the actual amps being modeled. Most of this is pretty straightforward—if you know the real thing, you’ll have no trouble getting the sounds you need. But if you’re not intimately familiar with the actual amps being emulated, the best advice I can offer (besides the previous suggestion re inputs) is to avoid the temptation to rely on presets, and instead build up the sound from scratch for every track. No matter how well-thought-out those preset settings might be, they can’t anticipate the sound of the guitar itself, the guitar’s output level, or the needs of the particular track and arrangement. Just because presets are available doesn’t mean they’ll provide the best sound the sim is capable of—you’ll often get much better results rolling your own.

So, when it comes to recording electric guitar, taking the path of least resistance—sticking a ’57 an inch in front of an amp, pointed directly at the speaker—will probably yield at least a usable, decent electric guitar tone. However, with a little extra attention paid to the various alternative techniques and approaches, even better, bigger, fuller, more dynamic guitar tracks can be had—the results can definitely be worth the extra effort.

This video course will help improve your electric guitar recording workflow and know-how!

Sam
6 mistakes to avoid when writing an article on recording guitar.
#1: not talking about phase and how phase works when using multiple mics
Nethan Paul
This is really a good article to know about the general mistakes which we have made while recording guitar. I have done recording using audio plugins and since I have knowledge on parts of a guitar it provides additional advantage to me. I have installed nashville tune-o-matic bridge (https://faberusa.com/production-direction-4-choice-nashville) and saddle screws. Now, I came to know about these mistakes and will take care of them next time.