6 Mistakes To Avoid When Recording Drums

Language
Setting up a multi-mic recording of a drum kit is complex, so it's no surprise that there are any number of things that can trip up an intrepid recordist. Here are 6 potential pitfalls to avoid.
Prev 1/6 Next
1Mistake #1 2Mistake #2 3Mistake #3 4Mistake #4 5Mistake #5 6Mistake #6 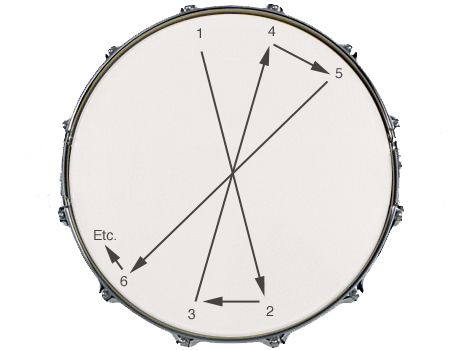 Everyone remembers to tune the guitar or bass for a recording—it can be pretty obvious (and painful to the ear) if that critical step is passed over. But the drums also require a little attention paid to this as well. Now, in many cases this would be handled by the drummer himself, and with an experienced drummer, that’s probably best, but other times this task may fall to the engineer—sometimes the drummer may need to be able to just walk in, sit down, and play.

For those who may be new to drum tuning, or rusty at it, remember, first slacken the head, tighten partially by hand, then use the drum key to go around the head, moving from lug to opposite lug, tapping near each lug as you go, to assure even tension all around.

Besides tuning to a general pitch-center for snare and kick, the toms (depending on type of the heads and damping in use) may produce something closer to a specific note, and sometimes it can be a good idea to tune them to the key of the song, to avoid potential clashing. The drummer will undoubtedly have his own preferences—after all, tuning not only affects what you hear, but the playing response (bounce) of the drums themselves. Work with the drummer to ensure that whatever tuning is ultimately settled on doesn’t just sound good to you, but is comfortable to play, and most importantly, right for the song. 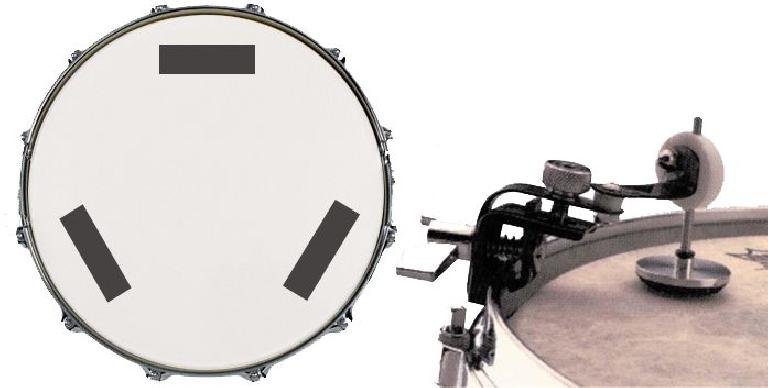 Pic 2: Some approaches to damping drums for recording

Another thing to watch out for when first setting up the kit is any problematic ring. Drummers may be used to tuning the kit so it sounds good at a distance (like in the audience at a club, for example), but the recording mics an inch or two away from the heads may reveal over-ring that wouldn’t be audible in the audience.  A recording setup will usually require at least some damping to control not only any bad-sounding (nasty, pitchy) over-ring, but also to shorten up the overall ring—the decay—of the drums. Again, what works at a distance (acoustically) may be too much lingering “boom” up close.

On the other hand, you don’t want to dampen the ring too much—this may not only make the drums sound too dead, but may also negatively affect playability. Drums should have a long-enough decay for a solid tone, but ideally not hang over the beat. Of course, the snare drum may be more heavily damped—by the snares themselves—and the kick may also have the front head removed and materials (blankets) stuffed inside to reduce all ring to a sold thump (though that modern classic short, heavily damped kick drum sound may not always be what’s desired or needed—bigger, more open, double-headed kicks are also popular in many genres these days).

If the drum is well (evenly) tuned, a single piece of tape may be enough to control any over-ring—for a tighter, deader sound, two or three pieces can be used (Pic #2, left). There are also other materials commonly used—felt, tissue, a wallet—along with dedicated drum mutes (Pic #2, right). While it may be possible to tweak the ring later (either lengthen or shorten it) via the use of compression, you’ll want to get it as close to ideal for the recording as possible—since the amount of damping will affect how the kit blends with the track, it will also affect what and how the drummer plays. 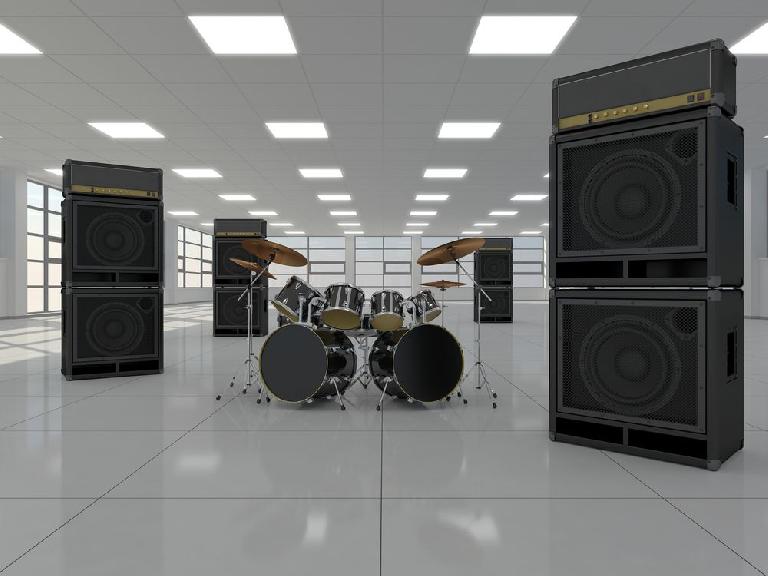 It’s easy enough to add ambience to a dry drum recording, with tools like convolution reverbs, that can provide the sound of anything from live spaces to classic mechanical reverb devices. But there’s still nothing that will beat a real space to make the drums sound huge. If the recording space is up to the task, it’s a simple matter to set up a pair (or two) of extra mics at the opposite end, to capture that rich ambience.

These room mic tracks can later be blended with the close & overhead mics to taste, and even compressed for that bigger-than-life drum sound. Since any room mics will also be much more prone to catch unwanted noise/leakage, a little extra attention to that potential issue would be warranted. 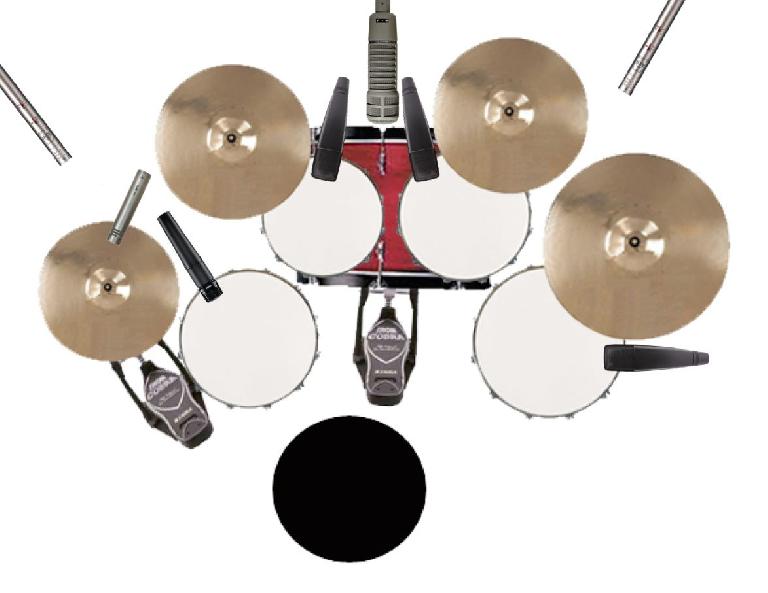 Pic 4: A diagram of a typical multi-miked drumkit

The most basic multi-mic setup for a drum kit typically consists of dynamic close mics (at an inch or so from each drum head): Snare top (SM-57 or similar) and sometimes bottom, Kick (D112, EV20, LD Condenser), and Toms (57s or 421s); a dedicated hi-hat mic (pencil condenser—KM84/184), along with a pair of overheads (small- or large-diaphragm condensers, or a stereo mic) for the cymbals and the kit as a whole. But if your mic closet or interface isn’t able to handle all this, don’t panic! Remember, it’s still possible to get an excellent drum sound with a bare minimum of microphones.

Even a single mic can capture a well-balanced kit (in mono), if it’s carefully placed (i.e., just in front of the kit, aimed more or less between kick and snare, with the balance among kit pieces set purely via the exact mic placement, by ear. More commonly, a stereo pair might be employed, either in front of the kit (audience perspective) or as standard overheads. For a good stereo image (without close mics to solidify L-R placement), overhead mics should be more or less equidistant from kick and snare, rather than simply placed at the edges of the kit (this may involve a little front-back adjustment as well as L-R positioning).

When overheads are well-positioned, they should supply a natural, well-balanced, well-imaged kit (though obviously with a more room-y, less tight “studio drums” quality than close-miking would provide. The one element that may be too weak and thin will be the kick, since its heads are firing perpendicular to the mic, so a third mic—in front of the kick—is usually added. This three-mic approach has yielded many classic drum tracks.

With the importance of the snare (backbeat) in modern music, a fourth mic is often added—this would be a close (or closer) mic on the snare’s top head, at a few inches to around a foot’s distance, allowing for more control over the snare’s level, tone, and imaging.

With careful mic selection and placement, this kind of minimalist drum miking setup should yield a fine drum sound that will stand up well in most arrangements (at least for styles where a natural drum sound is desired). 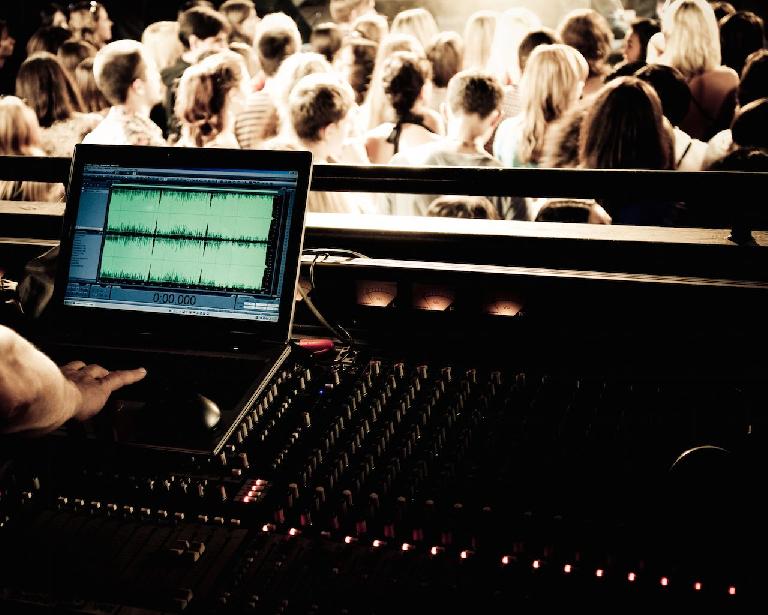 One of the first lessons many engineers learn—often the hard way!—is to leave more headroom than you think you’ll need when setting drum levels for a recording. Often, a novice/unsuspecting engineer will set levels by having the drummer go around the kit and hit each drum individually, and then play a representative beat. Naturally, the engineer will tell him to play “like he’ll be playing in the song”, and he will be happy to oblige. And then, almost universally, when recording the first full take for real, he’ll proceed to dig into the performance, and pin every meter well into the red!

The moral of this tale of woe is, drummers almost always generate much stronger transients and overall levels in actual takes than they do in sound checks and run-throughs. The 3–6 dB of headroom you naively thought was safe is often easily exceeded, possibly by enough to completely ruin a potential keeper take (sometimes that first take is golden). Rather than hoping that those “miracle-worker” audio repair tools can get you out of a jam later on (maybe yes, maybe no, but never count on it), you’ll quickly learn to overestimate the amount of headroom required, at least around 12 dB—with modern 24-but DAWs, this may look low on some meters, but it’s perfectly fine!

6. Don’t let phase bring you down 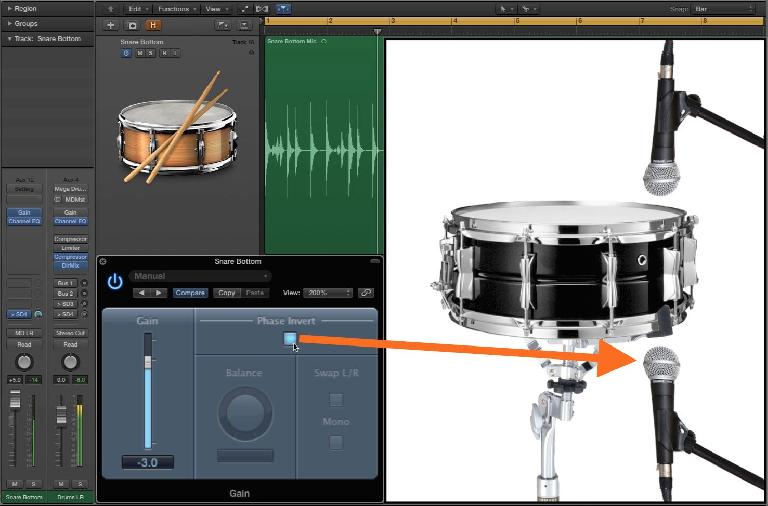 Pic 6: Flipping the “Phase” (really Polarity) on a bottom snare mic will preserve a fuller tone

Finally, the last caution is about phase—you know, the relative timing of the individual cycles of different waves when they’re combined. When the same signal is picked up by more than one mic—as is inevitably the case with a multi-miked drumkit—there’ll be a time difference between mics. The resulting phase cancellations and reinforcements (comb filtering) could negatively impact tone when all the mics are open.

Now, this kind of phasing, in and of itself, is not necessarily a bad thing—in fact, it can lend a little air and openness to the overall drum sound (remember, all sound in acoustic spaces is subject to some degree of phasing!). What you’ll be looking out for is any negative effect—weak, thin, nasal tone, that may compromise the snap, punch, and fullness of the drums.

You’ll want to solo the various drum mics, and then combine them—in groups, and all-together—listening for any changes in tone (inevitable), and then determining if they’re beneficial or problematic. If there is a negative effect, you could try A) reversing the polarity of one or more mics, and B) delaying one or more mics by a few micro- or milliseconds. You’ll be able to see these small timing differences if you zoom way in on the waves, and some engineers routinely line up the regions (visually) of all the drum mics to be in perfect phase. Personally, I think this is going overboard, and can rob the drum sound of any desirable phasing (the air and openness I like), though it may impart a bit more fullness and snap—it’s really a judgement call.

The one phase tweak you’ll absolutely need to make is reversing the polarity of the bottom snare mic (assuming you have one). If you think about it, it’s obvious why—as the drum is struck, the vibrating top head first moves down, away from the top mic, while the bottom head sympathetically also moves down, but toward the bottom mic (pic 6). This puts the two signals in opposite polarity—guaranteed to thin out the tone. Opposite polarity is equivalent to 180° phase difference (which is why those two terms are often—incorrectly—used interchangeably), and flipping the phase/polarity setting (on the console channel strip or via a DAW plug-in) of the bottom mic will put it back “in phase” with the top, for a noticeably fuller snare tone.

And with that, I’m out of space. We’re all probably a little spoiled by the finished, polished sound of virtual drum kits these days, and it’s easy to forget just how raw the sound coming straight off the mics can actually be. Hopefully, these suggestions/tips will be helpful for anyone who finds themselves wrangling a live drum kit, and has to get it right on the first try!

Watch this video course on recording drums to learn everything you need to know when capturing the sound from your skins!
Prev 1/6 Next
1Mistake #1 2Mistake #2 3Mistake #3 4Mistake #4 5Mistake #5 6Mistake #6