6 Mistakes To Avoid When Managing Your Next Recording Session

Capturing a sound isn't the only important part of a recording session - there's a lot of other things to consider. Here are 6 mistakes you must avoid to ensure the best results.

At the most basic level, recording is simple—you stick a mic in front of something, push the big red button, and go. But like with anything, the devil is in the details. Here are a few potential issues and things to watch out for in a typical DAW recording session.

1. Don’t Let The Tracks List Get Away From You

Some recordists create a template with plenty of empty tracks waiting, while others prefer to create tracks as they go. But either way, it’s not uncommon to end up with a long list of tracks pretty quickly, what with virtual instruments, audio recordings, effects auxes and the like. As new tracks are added, including multiple takes, doublings and triplings and experimental musical parts, the track list can get so long that it can bog down the session, making it harder to quickly find a desired take when needed, or mute or solo certain elements of the arrangement, with all the tracks just stacked up as one long list. 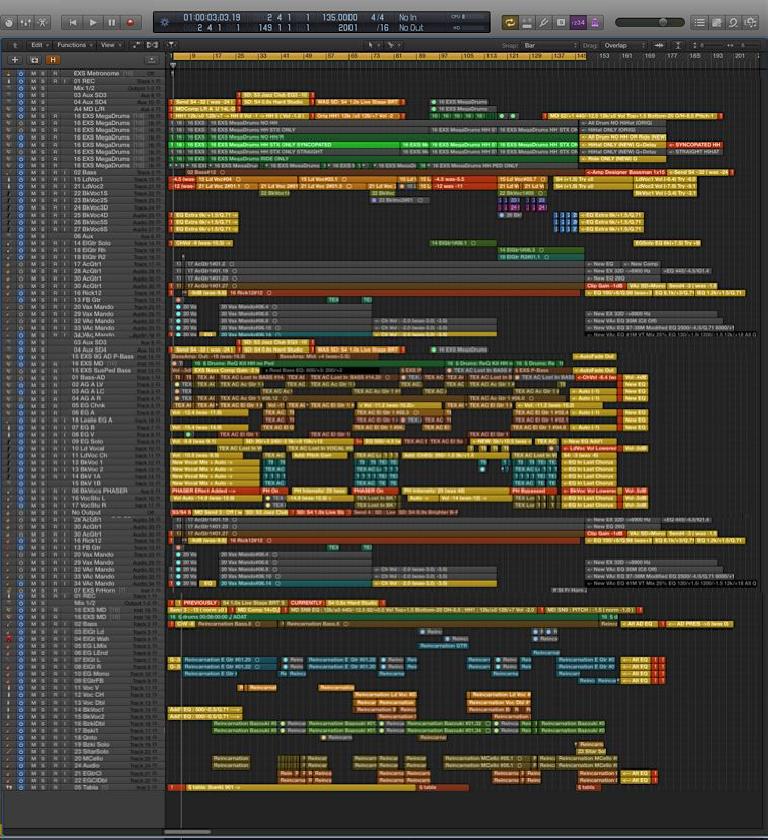 A little track organization can go a long way in keeping things better organized, and making it easier to see important details at a glance, like how many takes there are of a particular part, or how many layered parts are contributing to a dense musical tonality. Most DAWs offer ways of nesting tracks—the most obvious are Take folders—aka Playlists—but general-purpose track folders and subfolders can often be implemented in the main track list as well, and some DAWs offer several options; for example, Logic includes Track Stacks, Take Folders and Track Alternatives, each of which offers a slightly different way of organizing groups of related tracks.

For quickly soloing or muting groups of tracks, besides the above methods tracks can be organized as Mix groups, or placed under the control of a VCA fader—both will let a related group of tracks be quickly soloed or muted, or level-adjusted, for convenience during the recording session as well as later in the mix stage.

I use color-coding as a method for organizing tracks—not only does this provide an easy and obvious visual reference, but if tracks can be selected by color, that opens up additional possibilities for organization.

Most DAWs auto-name tracks with simple numbering schemes, like Track_01, Track_02, or Audio_01, Audio_02, based on the track name of the currently record-armed track(s). This is fine for smaller sessions, but with larger sessions it can get be more awkward to remember which musical part is Audio_01 or Audio_02. Instead of naming tracks after they’re recorded, even in a busy session it only takes a moment or two to name the tracks before the first recordings/takes go down—then instead of Audio_01, Audio_02 you’ll have Vocal_01, Vocal_02, Bass_01, etc. 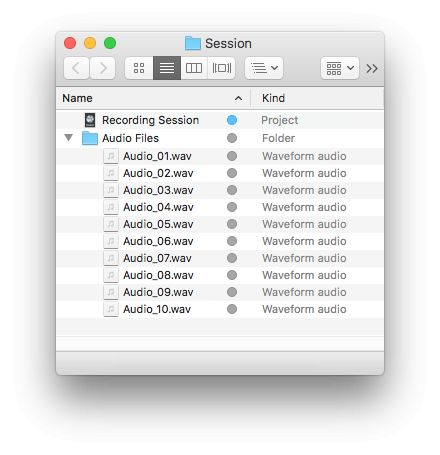 This can become more critical if certain recordings are used in more than one session, or if a project is moved around or shared—if a bunch of audio files named Audio_01, Audio_02 from different sessions get mixed up, it could be a real nuisance to have to audition them to get things back in order. In fact, in that scenario even a bunch of tracks named Vocal_01 from different sessions would be hard to distinguish, so it would be good practice to include some reference to the session as well. It doesn’t have to be some long, confusing code; just a shortcut version of the session/song title will do, like a vocal for “My Song” could be named MyS Vocal_01.

3. Don’t Rely Too Much On Plug-In Processing

With modern DAWs, it’s often possible to monitor a track being recording—audio or V.I.—through plug-in effects (as long as they don’t induce extra latency). Since the effects won’t be recorded, that’s ok, but it’s still important to remember that the performance will be affected by what the player or singer hears as the recording goes down. If a part is too effect-laden during the recording, this may result in a performance that’s dependent in some subtle way on the effects; if they’re later determined to be unnecessary or undesirable, the performance might then not stand up as well musically. 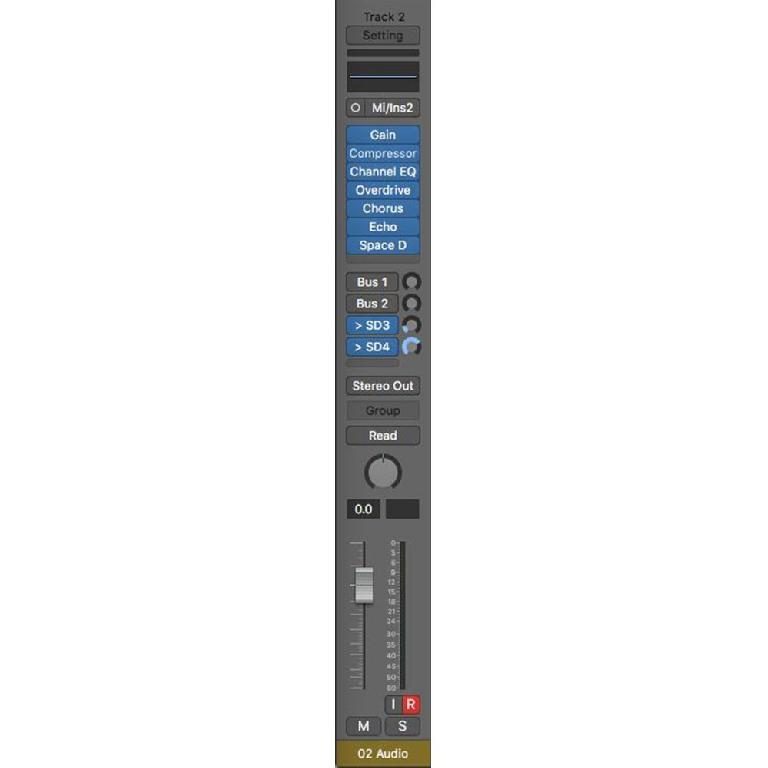 Of course, if an effect is an integral part of the sound, then it makes sense to hear it during the recording, even if that effect might be tweaked a little later on to help the track sit better in the mix. But for effects that may end up being more of a producer’s choice, it may be better to keep them off while the tracks are going down. Things that benefit the performance—like a little subtle reverb for a vocal—are always a good idea, but otherwise it may be best to keep it simple during tracking.

4. Don’t Over-Process With Analog Gear On The Way In

To keep their options open later on, many engineers try to avoid any analog processing on the way in, and this is always a valid approach to recording. But sometimes a little processing may be called for. However, it’s still a good idea to keep any such permanent processing to a minimum—most of the time it’s better to not shoot for a mix-ready sound at that early stage. Of course in the old days before multi-track recording, when multiple tracks were often necessarily submixed as they went down, input processing/mixing was often required, but nowadays it may be better avoid it in most cases. 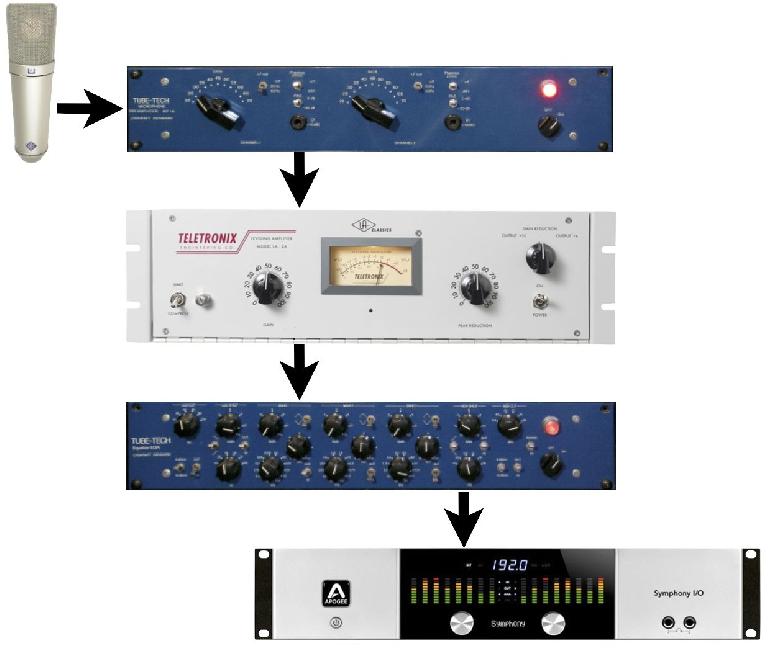 A typical analog front end for recording, with optional processors

Still, experienced engineers do often apply subtle analog processing to the signal being recorded, for several reasons. One is to impart some of the distinct analog warmth and character of the gear—it’s not uncommon for a track to be passed through, say, a vintage-style tube EQ with all the bands set flat, just to impart the device’s analog character. If there’s an obvious tonal flaw in the signal, it wouldn’t hurt to make a subtle correction—though more serious flaws might be better addressed by moving the mic or making other changes at the source. And it’s often a good idea to very gently compress a highly dynamic signal on the way in, both for dynamic control and ADC overload protection; subtle compression like from an opto compressor might be a good choice—the LA-2A is a favorite for this. As long as the compression doesn’t make the track sound compressed, or overly constrain the natural dynamic swings of the performance, this can be beneficial—no more than around 3 dB or so of gain reduction would be a good benchmark.

What the performers hear in their headphones during recording is critical—a good blend of their own signal against the track is key to getting the best performance. But surprisingly, this monitor mix is often given short shrift—thrown together at the last minute, or just taken from the blend heard in the control room by the engineer. This can be one of the biggest mistakes made in a recording session—every aspect of the performance is affected, and it’s worth the extra time it may take—even in a busy session—to get it right. 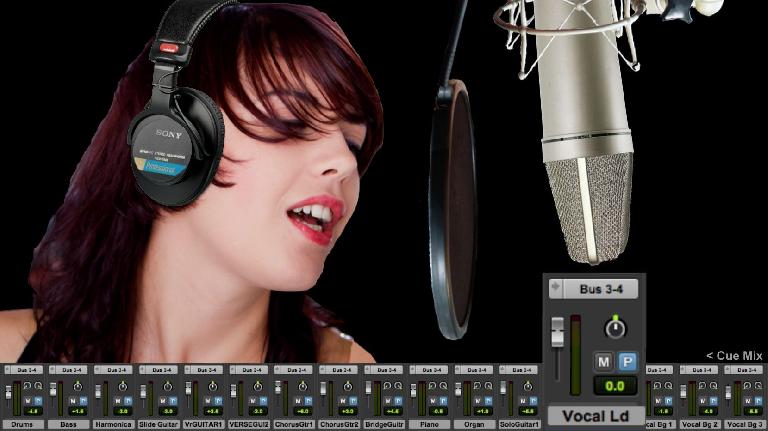 The level of the performer against the track will affect the dynamics of the part, especially with vocals. Too much performer may result in a less aggressive take that feels like the performer is holding back; not enough of the performer might result in a more one-dimensional part—loud and louder—or with vocals, excessive vocal strain that negatively impacts the tone and energy of the performance. Too much reverb can throw off a singer’s (or player’s) pitch—a common issue. If the backing track is too busy it may inhibit the player from coming up with a more interesting part; if it’s too sparse the performer may over-play, generating a part that’s too busy to fit in well in the finished arrangement. These are the kinds of issues that should be considered when setting up the monitor mix—a little attention paid early on can forestall a host of potential problems later.

Finally, though it often falls by the wayside, taking thorough session notes can be a great benefit both during tracking and further down the road. In the classic studio era, part of the assistant engineer’s job was to document everything—every track, every mic, every outboard patch; before console automation, it was the only way to pick up where a session left off in non-lockout projects.

But even nowadays, it can often become necessary to re-visit a session, and session notes can be a godsend in those situations. If a vocal needs to be re-done in part, maybe for a lyrical change, or a guitar part augmented after the original session, matching the sound of the original takes that the new part will be merged with will be much simpler if good session notes are available to detail the mics used, their positions and settings, any front-end chain, and the input level.

Even virtual instrument tracks can benefit from session notes—a problematic MIDI recording in a mix may be playing a replacement instrument, and going back to the original patch used for the recording, as noted in the session notes, could potentially reveal what the player was actually going for musically and dynamically, which may have been lost in translation as other instruments were substituted. 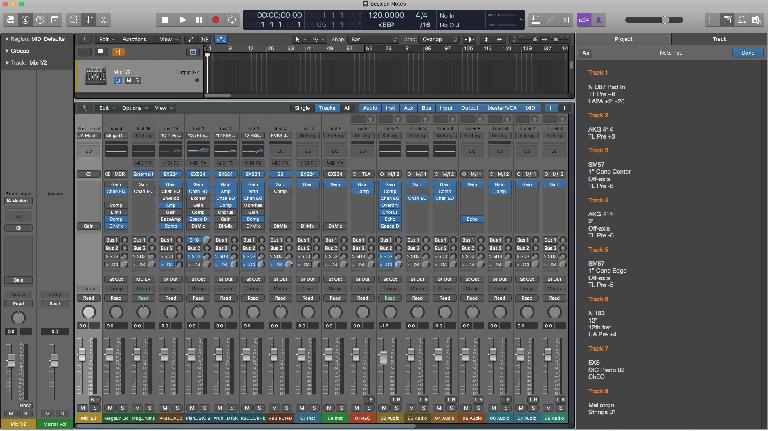 Many—if not most—DAWs have some sort of notepad that should make it easy to record important details of the recording sessions; if this is done whenever there’s a free moment, or by an assistant if one is available, it can make for much easier going when that session needs to be re-visited at some point down the line.

These are just a few aspects of typical recording sessions that might turn out to be potential issues—a little attention paid to these kinds of details can impact both the recording process and the final result in various positive ways.