Logic Pro X's Sampler is a complete redesign of the classic EXS24 software instrument. Joe Albano details six of the best new features every producer should know about.

When Logic Pro 10.5 came out it introduced several major new features, including the introduction of Sampler, an updated version of the venerable EXS sampler. Sporting a completely new look and some significant new capabilities, Sampler offers Logic users a sleek, modern tool for creating and editing virtual instruments and sample-based effects. Let’s take brief look at some of the new features every Sampler user will want to be familiar with..

1. Everything old is new again

The first thing to know about Sampler is that it provides 100% backward compatibility with all existing EXS Presets, Instruments, and Patches. In fact, Sampler is really still EXS under the hood—the User Interface has changed drastically, and the new features greatly enhance sample importing, mapping, and programming, but all the same functions of EXS are still present.

A few of the editing panes from the old EXS UI are still there, giving away its heritage to users in the know, but most of those settings can now be made more quickly and easily directly from the new front panel.

But despite the graphic redo, older EXS patches still open up intact, including more complex instruments. When Sampler first came out I went through my collection of custom EXS presets, many of which utilize some of EXS’s more obscure, advanced options—all opened and played flawlessly, but making tweaks is a much more straightforward affair with the new layout.

Sampler brings changes to the way Instrument presets are stored, slightly streamlining the older, somewhat confusing organizational approach to preset/instrument management. EXS utilized a layered approach to saving a sound, with several separate files on disk. Of course, the individual audio samples used in a preset were—and still are—stored as individual audio files. The keymap for each instrument—the arrangement of samples mapped to different notes ranges (key zones) and the references to the actual audiofiles on disk—was contained in a separate file, the .exs Instrument file.  This organization remains the same, but the Samples folder—with the audio samples—is now located right next to the Sampler Instrument (.exs) folder. There are two of each—one for the factory sounds, and another —in Audio Music Apps—for user sounds. The samples can still be located anywhere, but when saving a Sampler Instrument, a button in the Save dialog copies all used samples to the adjacent Samples folder, for consistent organization. 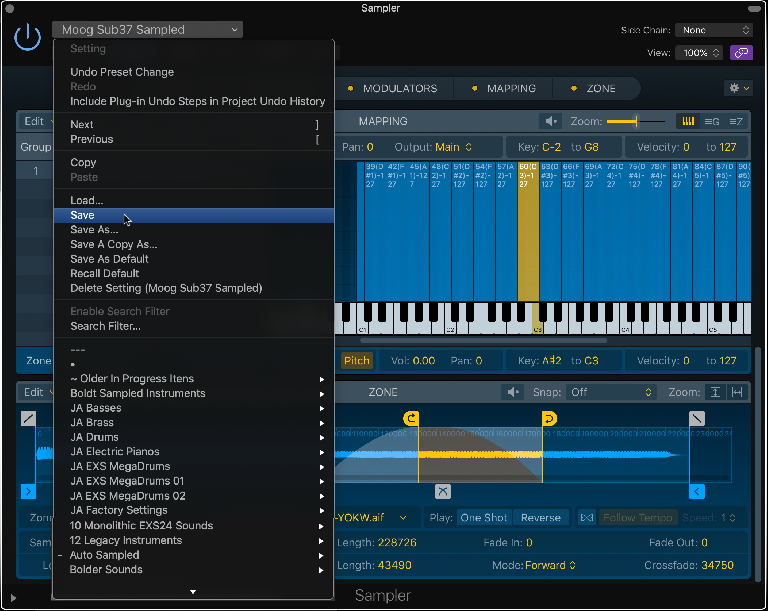 However, Sampler still reads, loads, and plays all existing EXS Plug-In Settings—you just won’t be creating any new ones. By reducing the organizational tree from three possible items to two, Sampler should make it easier to keep track of standard sample file dependencies going forward.

Of course the most obvious change from EXS to Sampler is the new graphic layout. EXS spread its controls and settings among three windows—the main front panel controls, separate windows for mapping and group editing, and editing an audio sample itself required opening it in the separate audiofile editor panel. Sampler puts access to all controls right within the plug-in window, for much more straightforward access, and all settings are saved/updated in the.exs Sampler Instrument file. 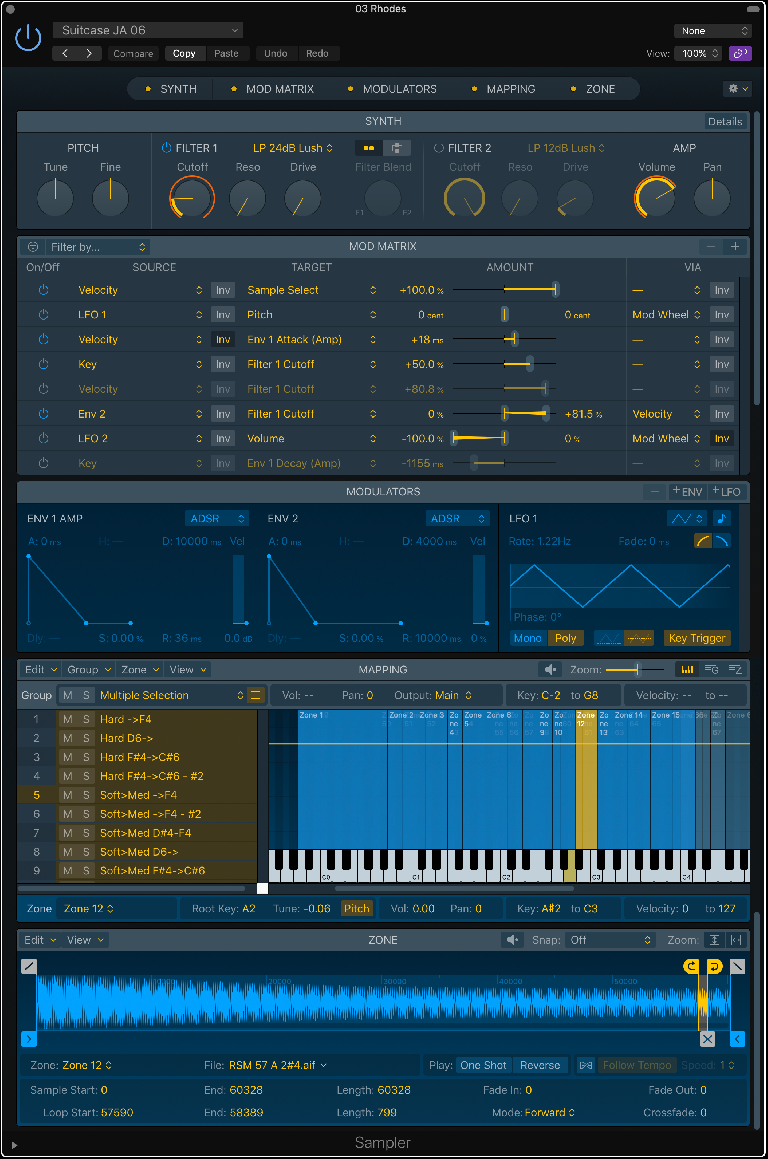 Sampler’s slick new window consists of five panels, including two new panels that replace the older separate windows in EXS. The Synth panel includes all the standard subtractive synthesis modules—pitch, filters (there are two multimode filters now), and amp, along with an extra drop-down display of advanced programming parameters. The Envelopes and LFOs are found in their own dedicated Modulators panel—Sampler can have up to four LFOs and five EGs, and the EGs can now include additional stages (AHDSR, DAHDSR). A redesigned Mod Matrix panel doubles the number of custom mod routings (from 10 to 20) along with its cleaner interface. 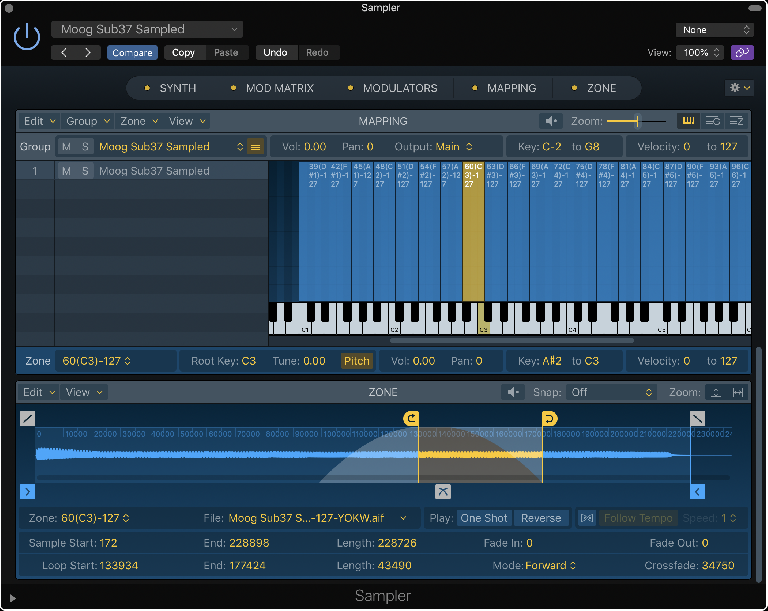 The Mapping panel is the single biggest graphic/functional change, replacing EXS’s usable but clunky zone mapping window with a slick editable display reminiscent of the mapping panels in other high-end samplers (like Kontakt). While numerical/text edits can be made, most mapping tasks can be done by dragging key zones in the display, greatly speeding up the process of setting up groups and keymaps.

The Mapping pane also includes two additional panes, which preserve the older (clunkier) text-based Zone and Group editors—a few advanced controls may still only be available there, but these are no doubt included mainly to maintain backward compatibility with older EXS Instruments.

The Zone Editor remedies EXS’s use of Logic’s separate audiofile editor pane, and adds welcome graphic options for trimming and looping. All in all, both mapping and key zone editing are now vastly more efficient processes, which should make die-hard instrument tweakers very happy.

While Sampler’s new layout is vastly superior to EXS’s cluttered front panel, veteran EXS users/programmers might wonder what happened to certain controls that are no longer where they used to be. EXS put all controls related to each subtractive synthesis module—pitch, filter, amp—within the relevant module section, but Sampler goes a different way. In Sampler, only the most commonly-used programming controls are included in the main display of the Synth panel—this makes for more streamlined access to the most frequent tweaks, but might leave EXS users wondering where the rest of the relevant parameters can be adjusted.

Those additional parameters are now found in a secondary drop-down display in the Synth panel, accessed from the Details button on the upper right. 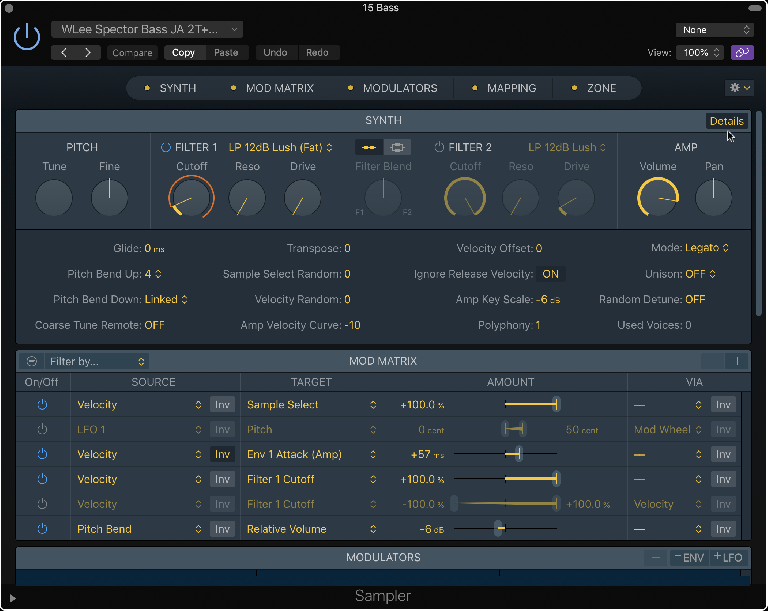 They're not as tightly organized by function, but they’re all there, including a couple that were previously hidden away in EXS’s drop-down panel at the bottom of the plug-in window, like the little-known Random Velocity and Random Sample Select features. While this may not be as immediately obvious as in EXS, it does help keep the overall display from being too cluttered.

Finally, one of the most important new Sampler features is the automatic Import capability. This slick feature is not really a Sampler feature per se—Logic 10.5+ includes intelligent auto-import and auto-mapping capabilities that can be used with all of its sample-based instruments—but I’ll just focus on how they’re used with Sampler.

When creating a multi-sampled instrument, as an alternative to manually mapping a collection of samples, Sampler can utilize Logic’s intelligent sample import/mapping features. Dragging a group of samples into the Sampler window can invoke several intelligent options for automatically arranging them into a playable keymap. Even if the samples are already in the instrument, they can still be auto-mapped or auto-remapped from Sampler’s submenus, including reading root keys from sample names or even analyzing the audio to determine the best root keys and key zone ranges. Sampler also includes options for auto-looping, which works surprisingly well, and can be a terrific time-saver when looping sustained samples.

Some Logic experts may recall that EXS also included some of these features, but the difference is that now they work far more reliably, and provide more consistently usable results. While no auto-import feature works perfectly 100% of the time, Sampler’s implementation is as good as any I’ve seen—couple it with the inclusion of MainStage’s Auto Sampler plug-in (also included in Logic 10.5+) and you’ve got a very efficient environment for sample-based instrument/effect creation.

For years die-hard Logic users had a love/hate relationship with EXS—they loved its efficiency and low CPU overhead but hated its old-fashioned layout and clunky programming. Sampler checks off most of the items on those EXS users’ wish lists, and it should make long-time EXS fans very happy.