Using a sample-based acoustic drum instrument can be a lot easier than recording a real drum kit. Joe Albano takes you through some of the best on the market.

There’s never any shortage of virtual drum Instruments, and those that set out to emulate the natural sound of acoustic drums get better and better with each passing year. Most long-time users have probably already settled on a favorite, but there are always new musicians and producers coming up who have yet to form a preference, so every once in a while it’s a good idea to take a quick inventory of the current top-of-the-line offerings available, for all those desktop drummers out there.

All of these instruments provide comprehensive mixing capabilities and the ability to tweak and fine-tune the individual kitpieces, and all allow the user to customize the kits with alternate drums and cymbals. They all also include a selection of patterns, though that’s approached differently in some. And all offer highly realistic drumkits that, in context, would be hard-pressed to distinguish from a live performance. I won’t bother to suggest which is best, or even provide a ranking—that’s too subjective, and even people who have a favorite may turn to other options from time to time, for a little welcome variety. So with all that in mind, and with apologies to the excellent instruments I’ll no doubt pass over, here’s a brief look at a few of the top virtual Drum Instruments available out there. 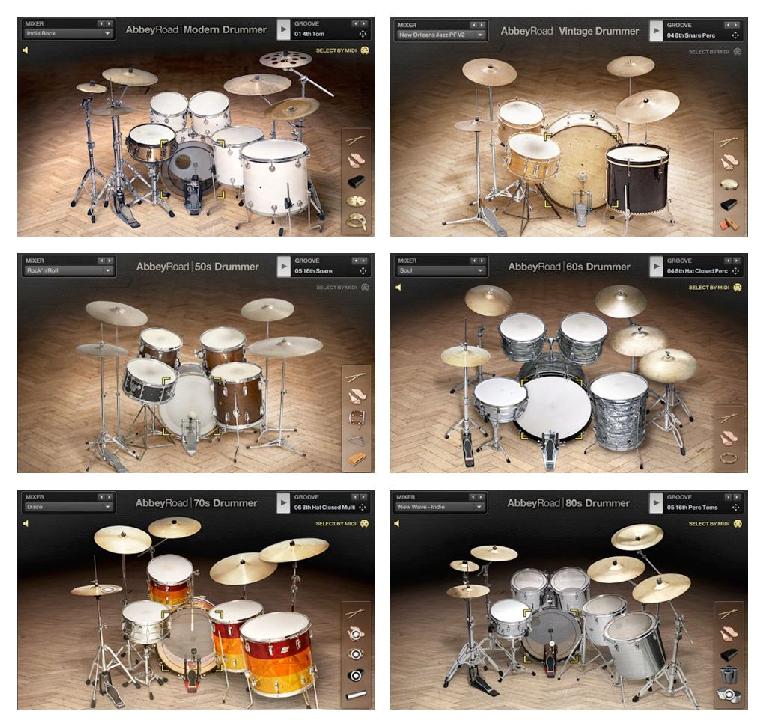 So many virtual instruments use Native Instrument’s Kontakt (and Kontakt Player) engine, and drums are no exception, but instead of trying to survey all (or even most) of them, I thought I’d focus on one of my personal favorites—the Abbey Road Drummer collection. This series of acoustic drums kits is comprised of six different collections—Modern, Vintage, and 50s, 60s, 70s, and 80s kits—which are available separately for Kontakt/Kontakt Player 5, or bundled with Komplete. All were recorded, of course, at the legendary Abbey Road studios, and each offers a unique take on classic drum sounds from different eras.

The sounds range from tight studio kits in the Modern Drummer collection, complete with a variety of industry-standard drum maps, to a pair of warm vintage kits suitable for jazz, complete with calfskin heads and recorded with vintage mics. The 50s/60s/70s/80s kits each target the drum sound of a specific era, including a classic Ludwig kit to represent the 60s, a Vistalite kit (acrylic drums, ala Bonham) from the 70s, and Yamaha and Slingerland kits equipped with concert toms, for that 80s vibe. The full bundle pretty much covers all the musical bases, and players from finger-drummers to V-drummers will enjoy the wide dynamics and responsiveness of these kits.

Toontrack has gotten a lot of press of late for their latest release, Superior Drummer 3, and it’s well-deserved. Toontrack’s Superior line has always paid a great deal of attention to detail, and v3 is no exception. It offers a 230 GB collection of drums and cymbals, recorded under the supervision of George Massenberg, and incorporates such niceties as a built-in grid editor (for pattern creation), integrated audio-to-MIDI conversion, and import of individual and third-party samples. There are also additional detail-oriented features like samples with alternate sticks (brushes, rods, mallets), and control of drum bleed, for that extra degree of realism. Each kitpiece can be tweaked with a comprehensive set of adjustments for dynamic response, and the sounds are second-to-none. 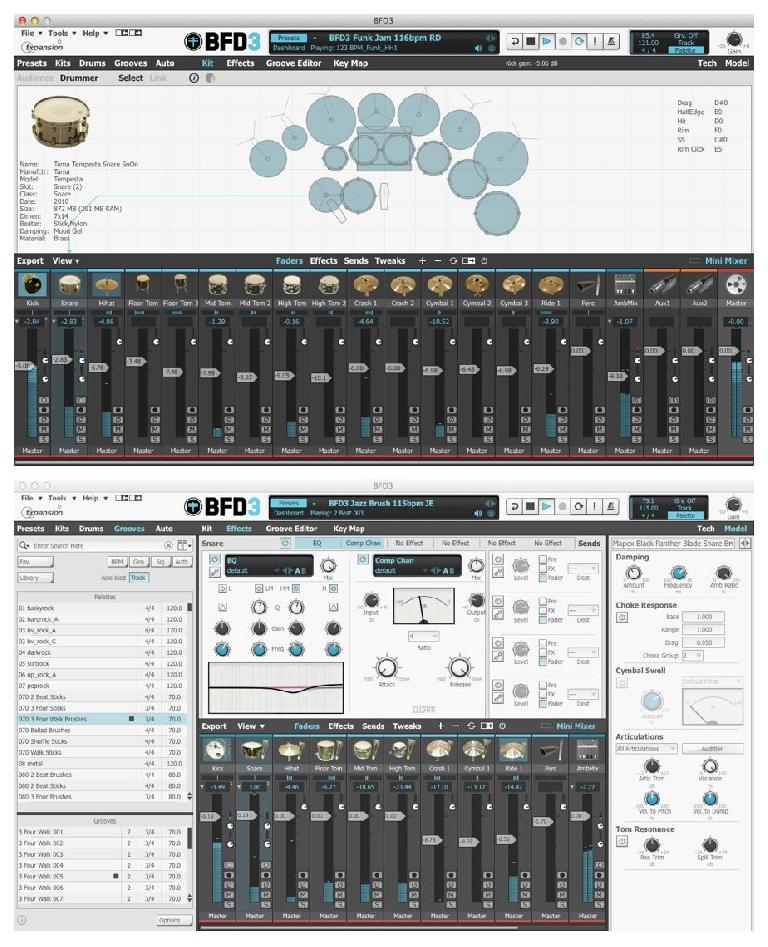 FXpansion’s BFD was one of the original high-end virtual acoustic drum instruments, and the current iteration doesn’t disappoint. Besides the usual large inventory of drum kits and individual kitpieces, one aspect of BFD3 that stands out is the use of modeling technology to enhance the realism of both the drum sounds, and the effects provided for mixing them. While the kits are primarily sample-based, FXpansion has incorporated modeling for some of the more subtle details of drum sound and response, such as tom resonance and cymbal swells.

And modeling has also been applied to some of the effects in the BFD3 mixer, like their DCAM circuit-modeled dynamics processors, for the vintage-sounding buss compression that’s beefed up so many classic drum sounds over the years. FXpansion also offers an impressively large set of add-on expansion packs, that include not only traditional alternative drumkits but also orchestral drums, marching drums, taiko drums and percussion packs to augment and enhance the beats and grooves from the main kits—it’s a full-service platform for all your drums and percussion needs. 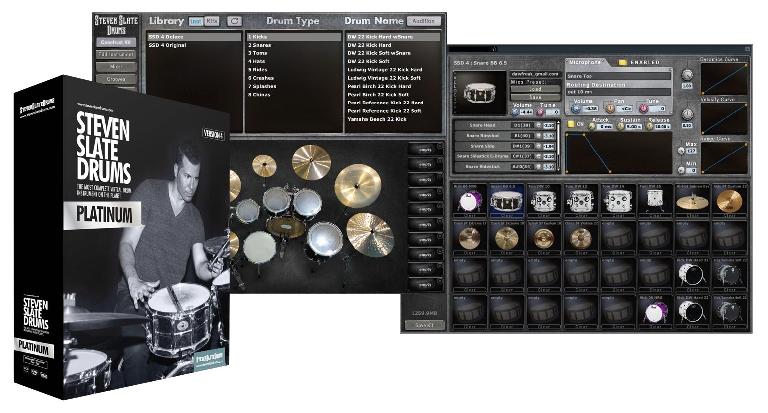 Steven Slate Drums offers another extensive collection, boasting over 100 kits, with a focus on playability. Their current top-of-the-line product—SSD4 Platinum—includes kits suitable for a wide variety of musical genres, from Rock, Funk, and Country, to Metal, Hip-Hop, and Jazz. The powerful Construct feature allows the user to build and edit kits and kitpieces, and includes niceties like the ability to layer drum samples, with individually-controllable dynamic (velocity) response, for highly customizable dynamic response and tonal variation. And the company also offers a companion piece, Trigger—a sophisticated drum replacement tool that utilizes high-end Leakage Suppression to ensure clean triggering when using their drums to augment or replace the sounds in an uninspiring acoustic recording. 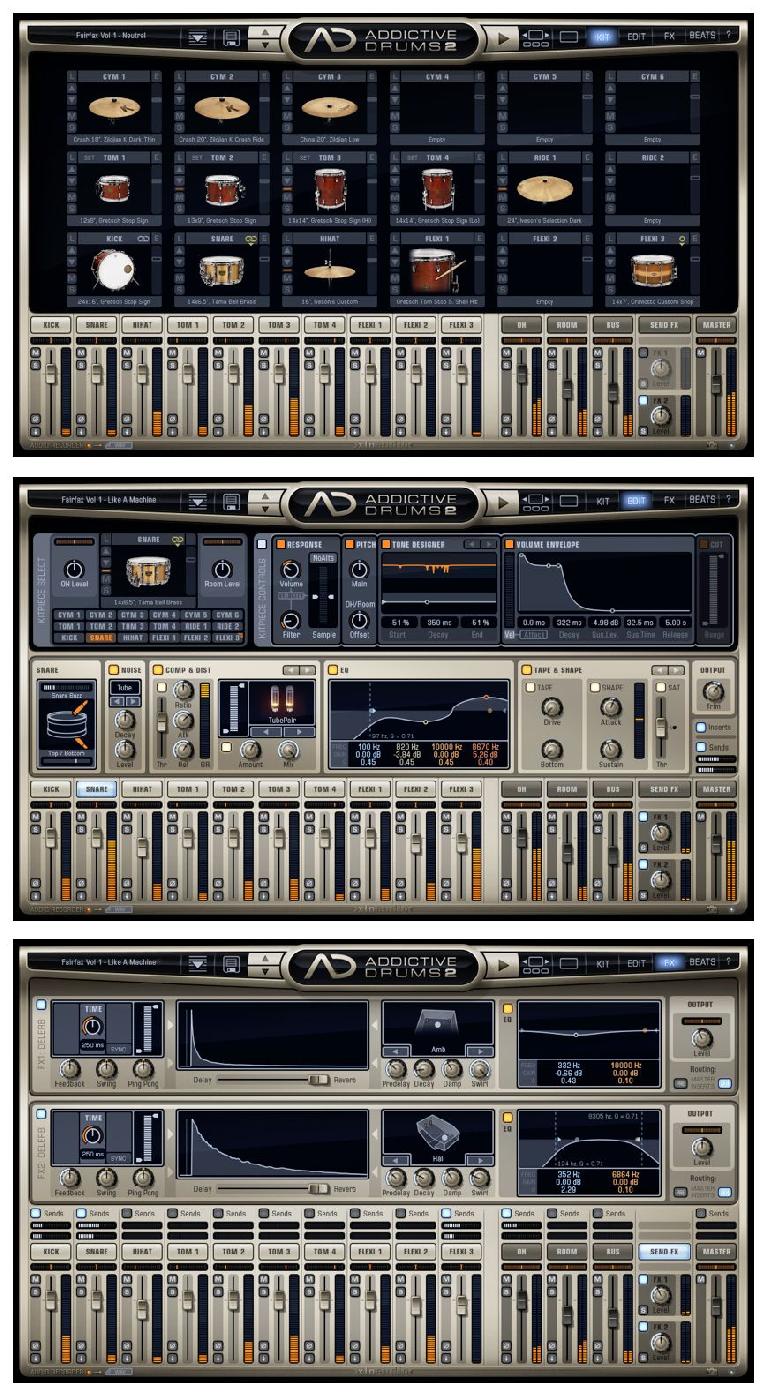 XLN’s Addictive Drums started out as an affordable, easy-to-use drum instrument, with mainly rock-style kits, but it’s blossomed into a full-featured family of customizable add-ons, including ADpaks—drumkits of various musical styles, from rock to pop to metal to R&B to jazz (including brushes); MIDIpaks—groove collections, available in a comparable wide range of musical styles, and Kitpiece Paks, which focus on a particular drum or percussion instrument. Their drum Edit page provides a sophisticated range of programming options, including control of derails like snare buzz, drum envelope, mic blend, and dynamic response for level and tone, along with both inline and and send & return effects, all presented in a very straightforward interface that’s quick and easy to navigate.

I’m including Logic’s Drummer and Drum Kit Designer in here even though—unlike the other instruments—it’s a proprietary feature, built into Logic, and only useable within that particular DAW. But it’s worth a mention due to its unique take on assembling drum parts. The sounds are provided by the Drum Kit Designer (DKD) plug-in, but that’s really a fancy skin for Logic’s old-reliable EXS24 sampler, which was augmented with a number of new high-end programming features to make these kits as playable and expressive as possible. The kits work in conjunction with the Drummer track, which is a novel way of creating drum parts. Instead of having the user assemble a part from a collection of pre-recorded MIDI drum patterns, Drummer creates its own parts, based on guidance from the user as to the groove, dynamics, complexity (i.e. fills), and other criteria.

It was designed to mimic working wth a real drummer—you give him direction, and then he comes with a part—different styles are represented as different “drummers”. It can be a little cutesy in some ways, and if you’re a control freak when it comes to your drum parts, this may not be the approach for you, but for those who like the idea of giving the virtual “drummer” a push in a certain direction, and then sitting back and seeing what he comes up with, it is a pretty cool tool.

As I said at the top, I’m sure I’ve passed over some equally worthy drum instruments, but this was just a brief survey of a few of the most popular and capable tools for creating dynamic, real-sounding drum parts. Any one of these can get the job done, and when it comes to choosing a favorite, the devil will be in the details—these instruments have plenty of audio examples available on the websites, so it’s worth taking a closer look at all of them if you’re in the market for some exciting new drum sounds.

Learn more about drum programming in the AskAudio Academy.