Transitions are a great way to bridge sections of a track when composing and arranging. Here are 5 ways to use them most effectively.

Transitioning into another section of a song can cause more than just a little anxiety in composers, producers and DJs alike as it can be a little daunting figuring out what comes next, and how you’re going to get there. In this article, I’d like to point out 5 tips of my own for creating some cool transitions in your music.

Tip 1. Feel Where the Transition Starts…

A transition can be anything from a snare fill or a break all the way up to a multi-measure build, complete with snare roll. And they're not that tough to build. The trick is figuring out where they go. Most of the time, my transitions tend to come in after I’ve built the basic arrangement, meaning I’ll have my opening, verse, chorus and bridge (when applicable) sections of the song I’m working on already laid out with vocals. Once those sections are in and I’ve got the basic body of the song, then I like to start inserting transitions in to my arrangement where I feel they are missing. The way I determine what is missing is an important step for me. Usually they next day after I’ve had a little sleep and separation from the song, I’ll start from the top and just listen for what is missing. When you are relaxed, your creative juices are usually flowing much more. As the song plays through, I’ll try to feel where a transition should take place. 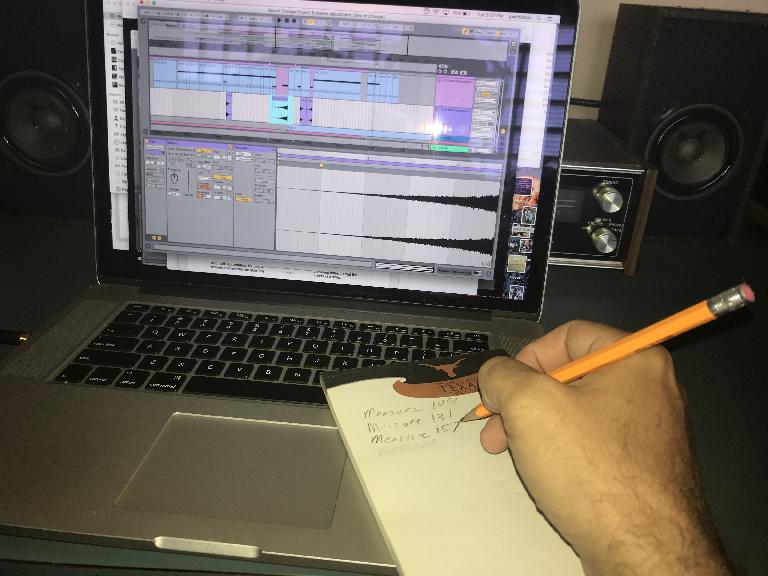 When I come across a section that could use a transition into another section, I’ll mark it with either a Marker in Ableton or if my markers are being used as skeletons for the arrangement, I’ll just write down the measures where I’d like transitions to begin, while I drink my coffee. I don’t really worry about when the transition will end, as I like to let the sounds, samples and effects that I’m using more or less determine the length of the transition. I just allow my inner child to come out, start sculpting the event, and when it sounds and feels right within the composition as a whole, then I’ll determine the end time of the transition.
Granted, all of the measures marked may not be long transitions! I may just mark one measure for a fill, one measure for a break, one measure for a massive drum solo. Some sections I may just leave silent!

In my experience, the placement of where a transition begins and ends tends to be more important than the actual content. In fact, some of the most effective transitions I have heard have simply been breaks inserted at just the right time, and then they pick up again at just the right time. Silence is one of the most effective instruments within any song and it inherently creates transitions when introduced merely by creating space. For example when the arrangement stops, you hear the decays of reverbs on drums, the final echoes of a synth, and maybe even a final echo of the vocals. If you let the song continue to break for a few measures, those decays and echoes can do some very interesting things, all the while giving the listener a moment to want to hear things start back up again.

With Automation, it’s very easy to exaggerate those decays or release times so that the echoes and reverbs are more expansive and huge within certain parts of a song. 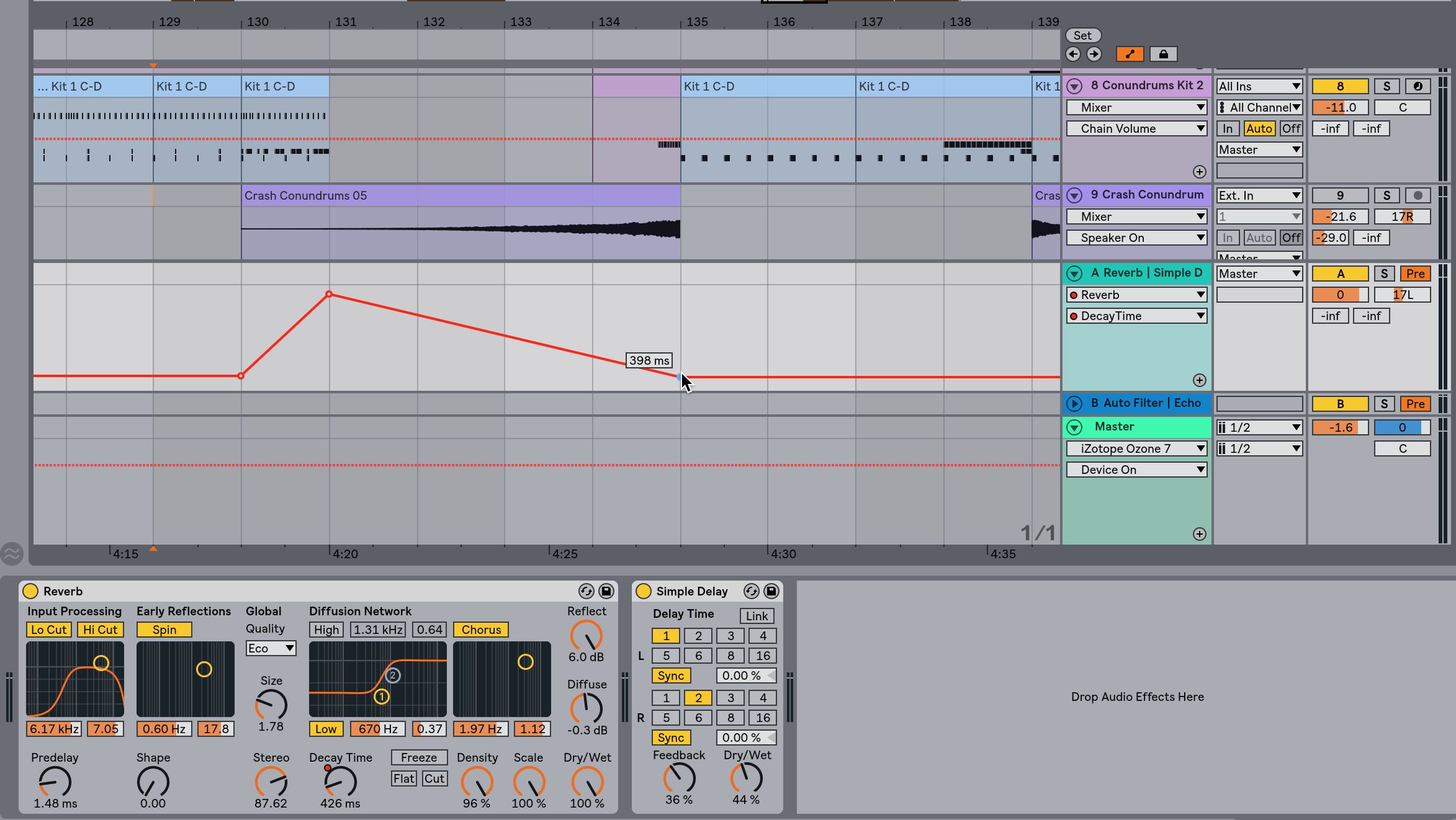 For example: I can use automation within Ableton to increase the Decay time of the Reverb I have on a Return track. Because I have more than a few tracks running through this Return, I create a much bigger exit that will linger, and serves as a transition in its own right.

In most DAWs there is a feature where you can stretch audio out within the arrangement view. This exists in Ableton, Reason and many other DAWs, and is awesome for creating quick transition. In Ableton for example, I can find a cymbal crash that ends a section and drag its length out, by holding down the Shift button, while dragging out its tail. 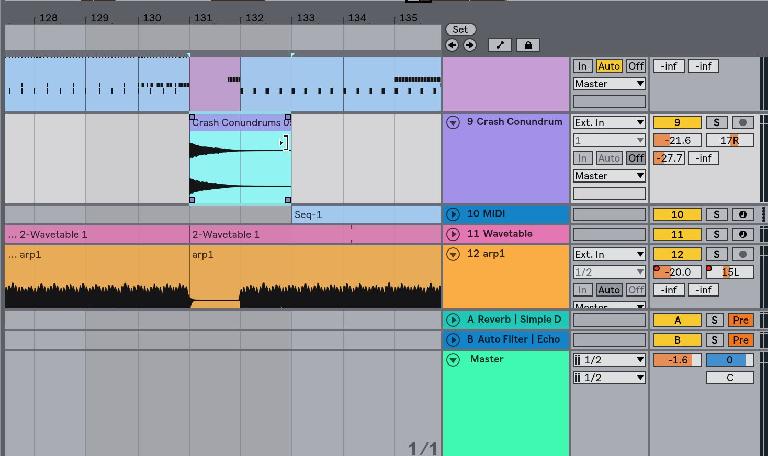 The only problem with doing this is that it can sometimes sound really fake and ugly. Audio stutters, cuts in and out. It doesn’t sound real. Though in Ableton, there’s a very cool way of fighting this. After stretching my audio out and getting a gnarly sound from a stretched out cymbal like this…

I’ll switch the Crash cymbal clip to the Complex, or Complex Pro Warp Mode playback algorithms that attempt to preserve the integrity of the original source audio.

Now, the cymbal sound much more real, identifiable and much longer within the mix. Imagine applying this to a voice or another drum or synth. Remember: if it’s audio, it can be stretched! And with electronic music, if it gets a little glitchy, rough, or even sounds more robotic, that’s okay if it works with the performance.

Reversing the playback direction of a clip in a break is a great way to herald the imminent arrival of a new section within a song. The cymbal that we stretched out in the last section is actually a great example of this, as cymbals create that sucking effect, making you think you’re being pulled back in. In Ableton, I’ll simply press the Reverse button that exists within the Clip Editor of every Clip in Ableton, which will reverse the playback position… 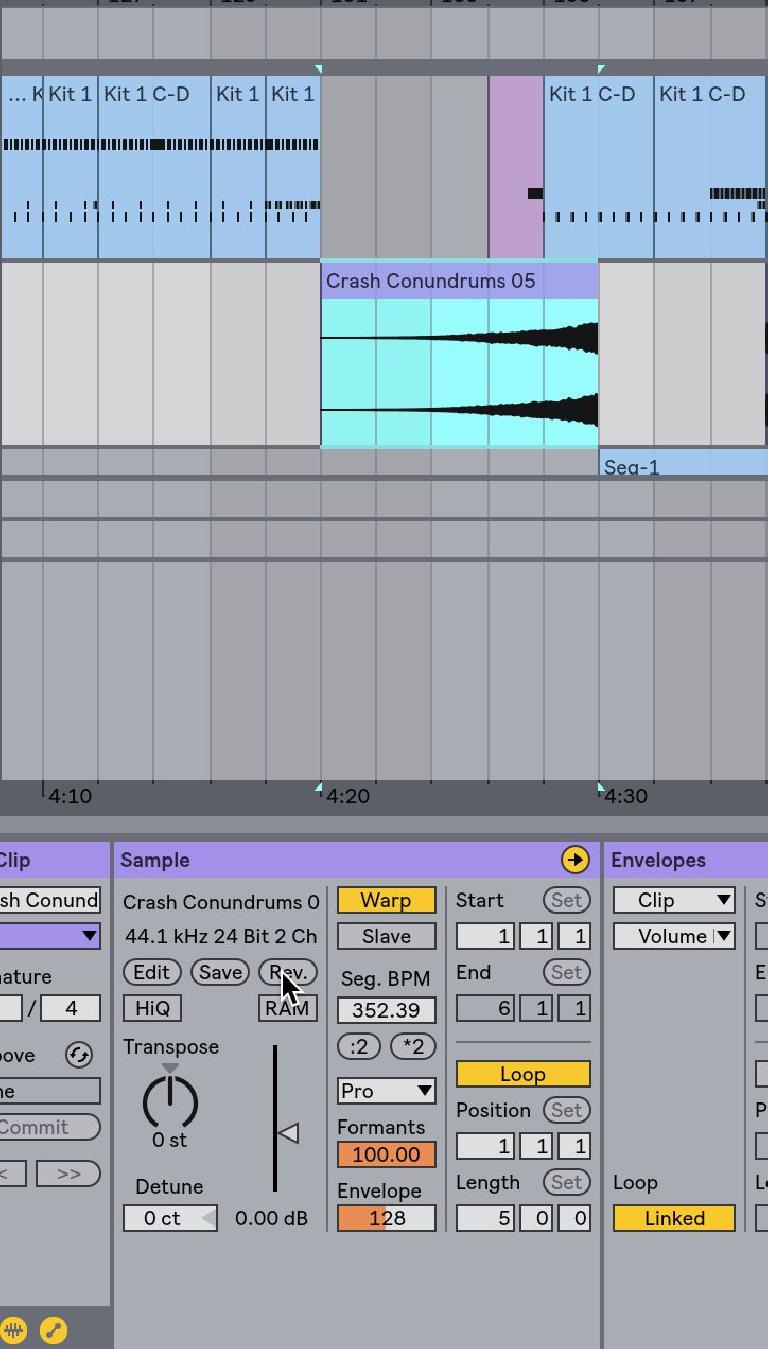 Once reversed, I usually have to move the clip around so that that the original beginning of the clip (the cymbal hit, before reversal) now sits right at the very beginning of when the next section will start so that it sounds like everything is being pulled to that one point, right before the drums kick back in. 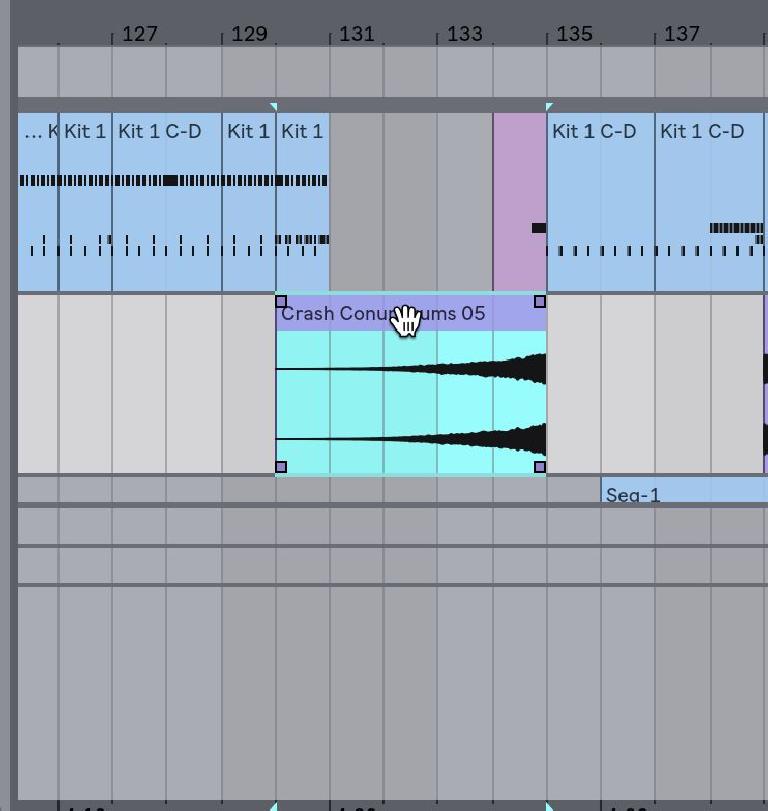 You’ll notice I have a little bit of reverb on a return channel to accentuate the reverse audio. I’ve found when reversed audio is dry, particularly cymbals, they sound a little cheaper to my ears. Maybe it’s just personal preference. 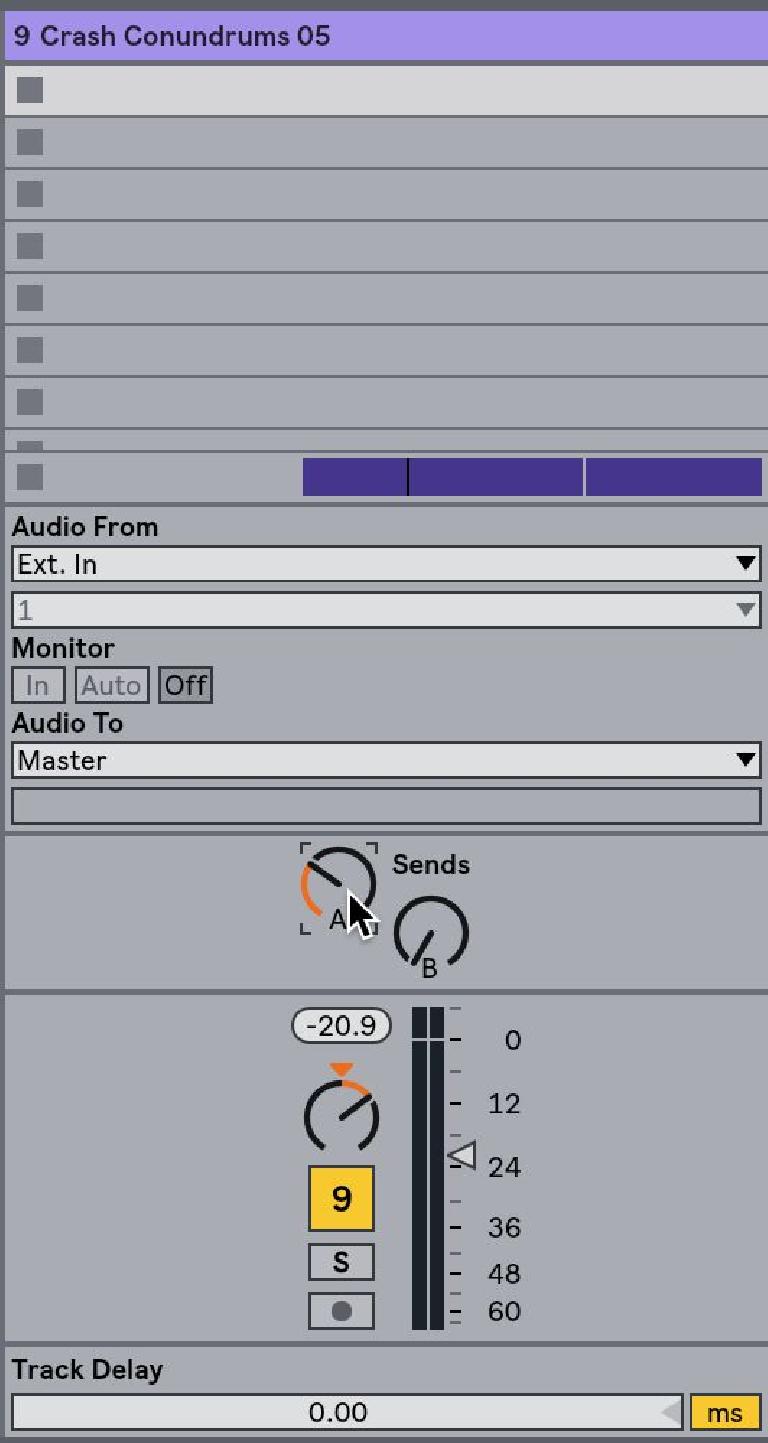 Once the timing is right and you’ve found a cool sound or effect to centerpiece in your transition, the fun really begins as you can begin layering other sounds and effects until things begin to take shape. I usually begin sprinkling hits in along with the metronome and looking for tracks that aren’t getting a lot of attention in other sections of the song. And if I’m really wanting to build up to the next section, I’ll usually use something along the lines of a snare roll along with a rising effect of some sort, which our reverse cymbal would already qualify as. If I’m clever with my velocity ramp in the drum editor, I can sculpt a roll that compliments my extended crash nicely. 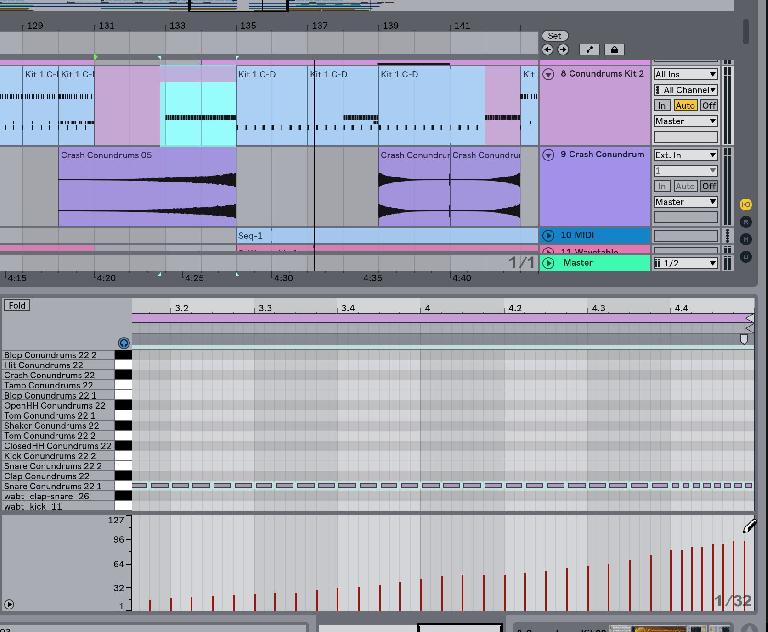 Thus, leaving me with an effective transition that I can either add more to. Or, just appreciate that the break now seamlessly transitions to the next part of the song!

Take your time on the transitions that you bring in, and you’ll find that you can have not only a lot of fun with them but you can really learn something every time. They are either executed properly or they aren’t. You don’t really have to wonder, as the rhythm and flow of the performance you’ve created will tell you. If the performance isn’t talking to you any more, than it’s time to take a break, and add those transitions in later.