Arturia's DrumBrute Impact could be just what you need to make powerful rhythms on the move. Here are 5 pro tips to get the best results from this cool drum machine.

Don’t be fooled by its low €299 price tag and small, sleek exterior. While the DrumBrute Impact could be known as the DrumBrute Compact when compared to its older and larger sibling, this analog drum machine packs a punch all of its own and provides a number of useful tricks for live performance and studio programming.

Here’s five easy ways to make your beats stand out from the crowd, quickly and painlessly using the DrumBrute Impact. 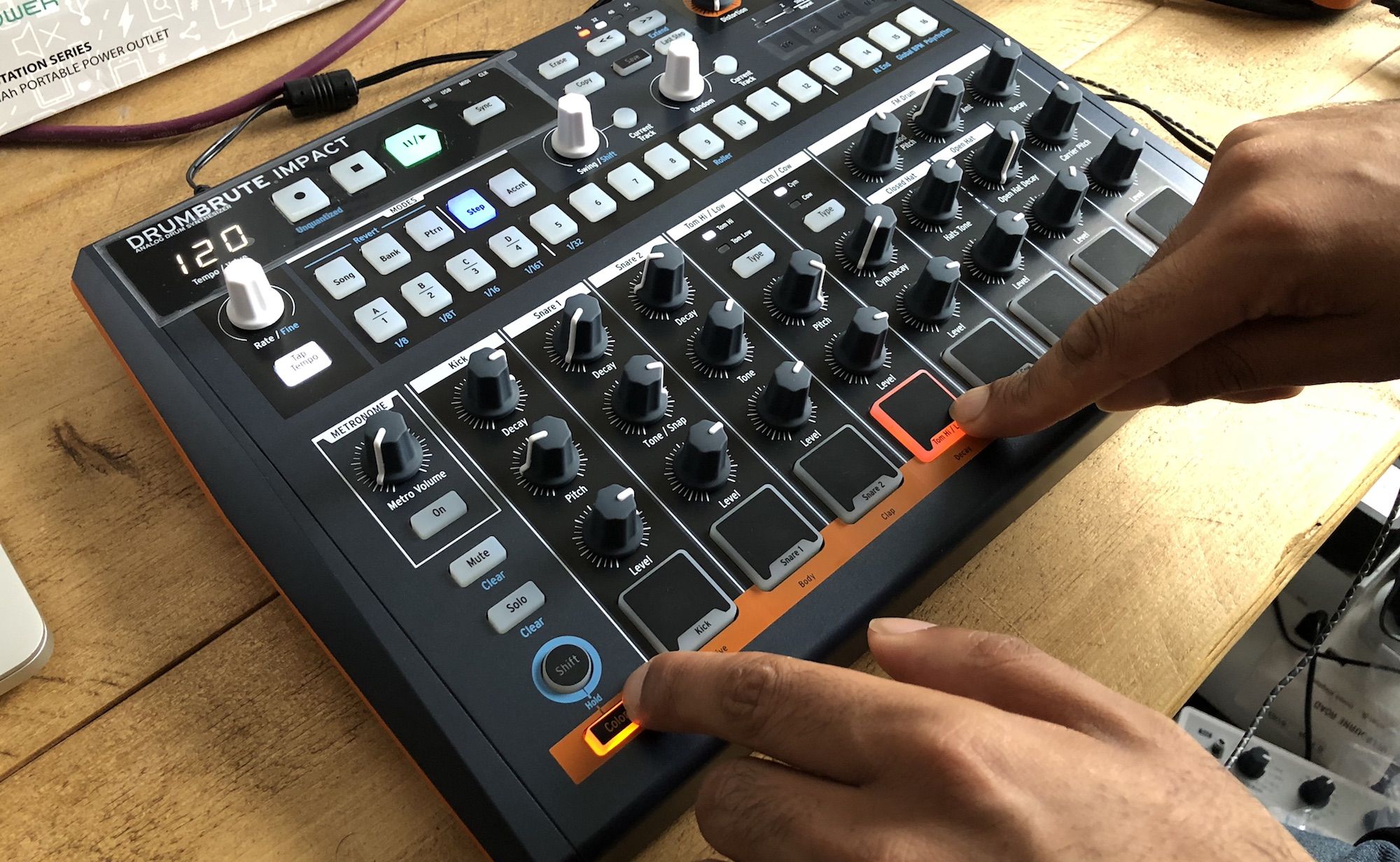 The DrumBrute Impact has a global distortion sound which is arguably more useful than the original DrumBrute’s Steiner Parker filter. However, you can apply saturation and other effects directly to instruments independently.

Simply hit the Color button and the pad for your sound to toggle between the ‘color’ and ‘normal’ versions of the sound for that instrument. Color doesn’t always mean saturation - it differs per sound. For the kick it adds overdrive, for snare 1 it alters the pitch and decay, etc.

If you want to add color to a step in the sequencer, ensure the track is selected, hold down the Color button and tap a step. It’ll turn red temporarily to show it is the saturated version.

What you might not realise is that by utilising the Accent feature each instrument actually has four possible sounds: normal, normal with accent, color, and color with accent. These can all be added via the step sequencer. 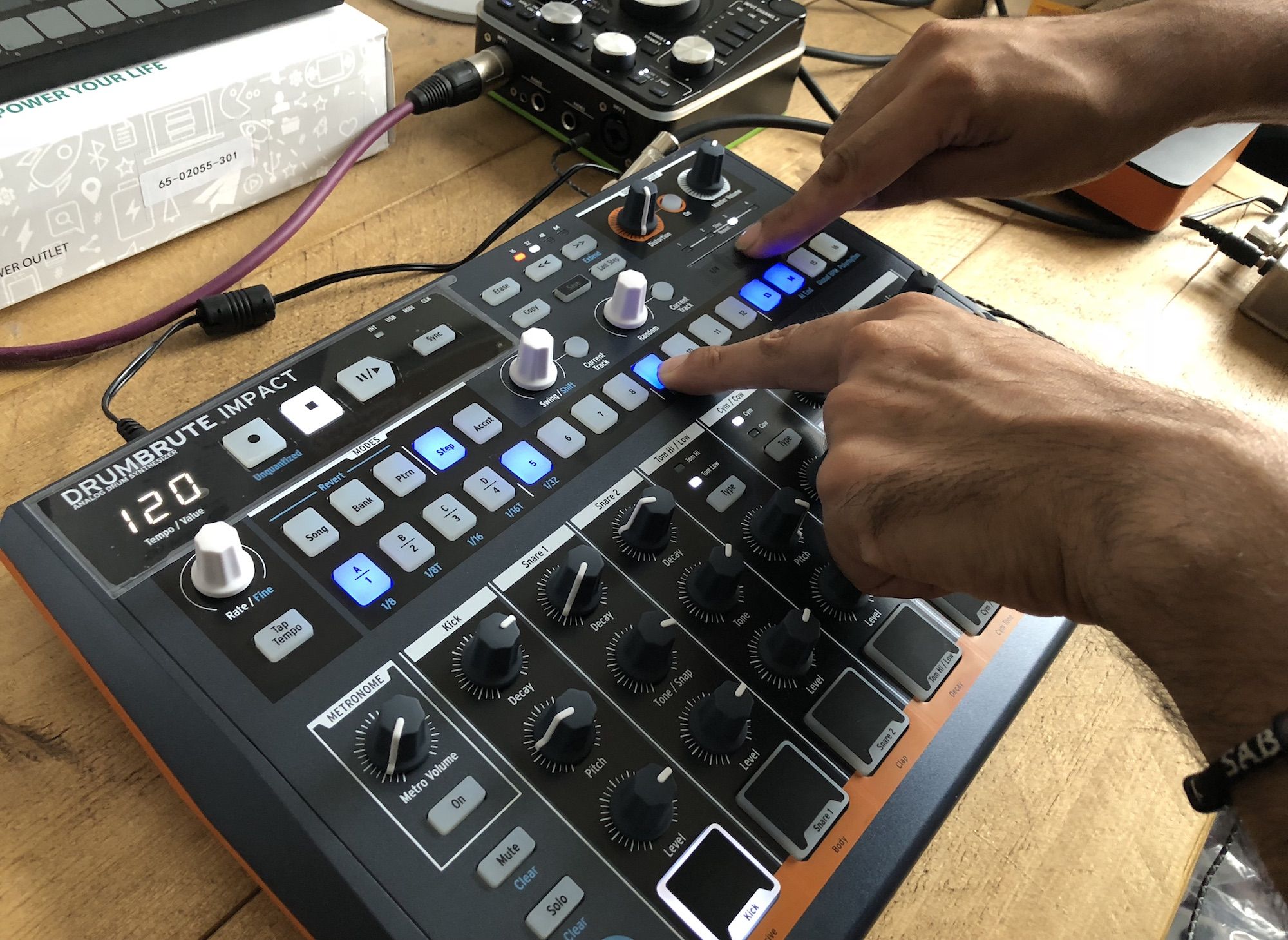 The roller and looper function is fairly self-explanatory. Using the touch strip it’s possible to repeat or loop the performance during playback. However, holding Shift + Step 9 instantiates Roller mode. Now you can generate rolls based on time division for the selected instrument only.

But we’re not done. The touch strip also functions as a step repeat when programming in a pattern into the sequencer. It’s easy when you know how.

Enter Step mode and hold down the step of the sound you want to ‘roll’. Then simply touch the value on the touch strip and you’ve got an instant glitchy or repeated sound. As you don’t need to be in record mode this is a useful trick when performing live. 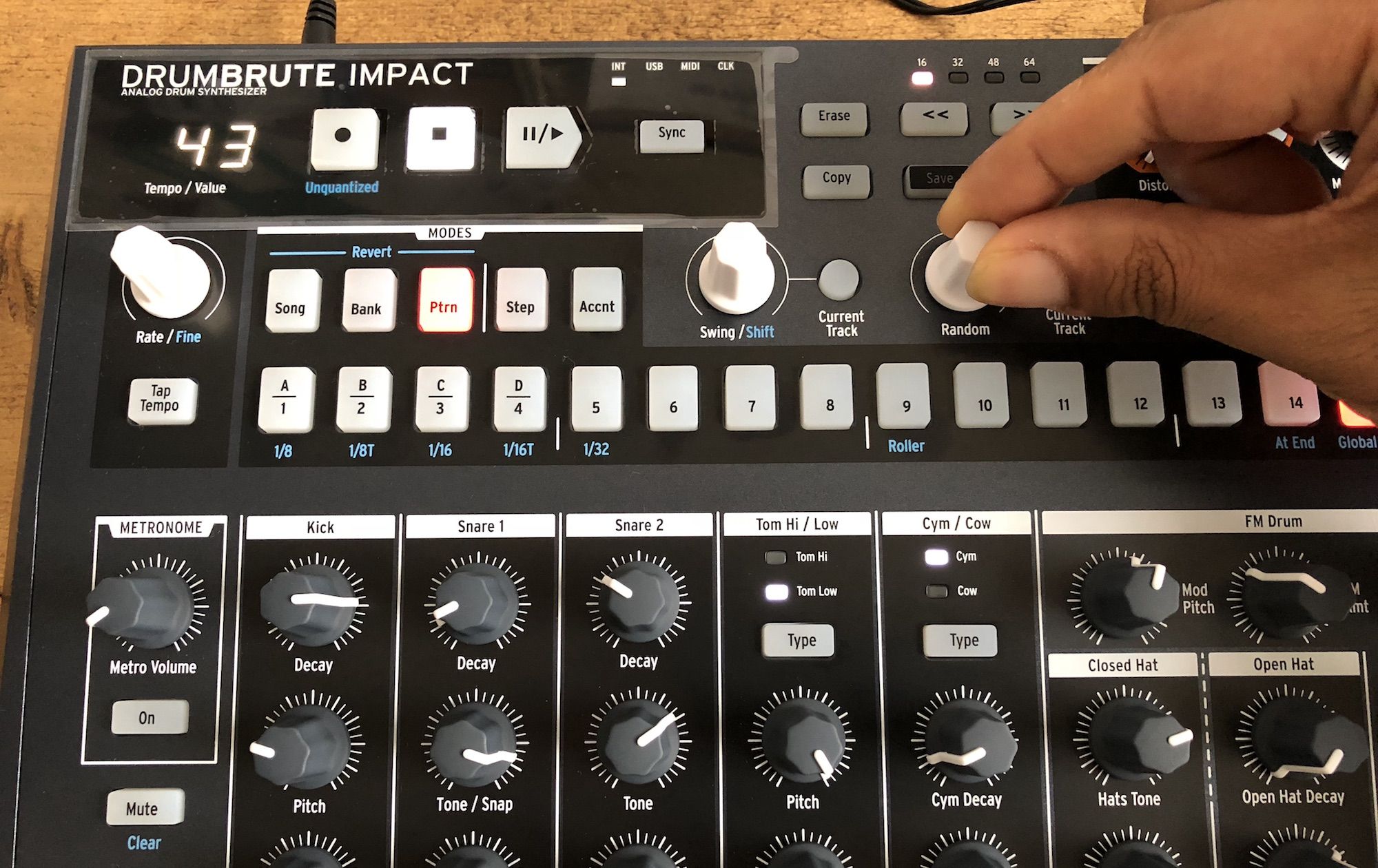 The Random encoder affects your patterns in three ways. The pattern itself, the velocity of each step, and whether the step is on or off. You can randomise the current track by toggling the button next to the encoder or choose to randomise the entire pattern.

A value of 0 results in no randomisation and a value of 100 means the pattern played back is completely randomized. Experiment with values imbetween on a particular track to give your patterns and performances a little bit of unpredictability while keeping the groove intact. 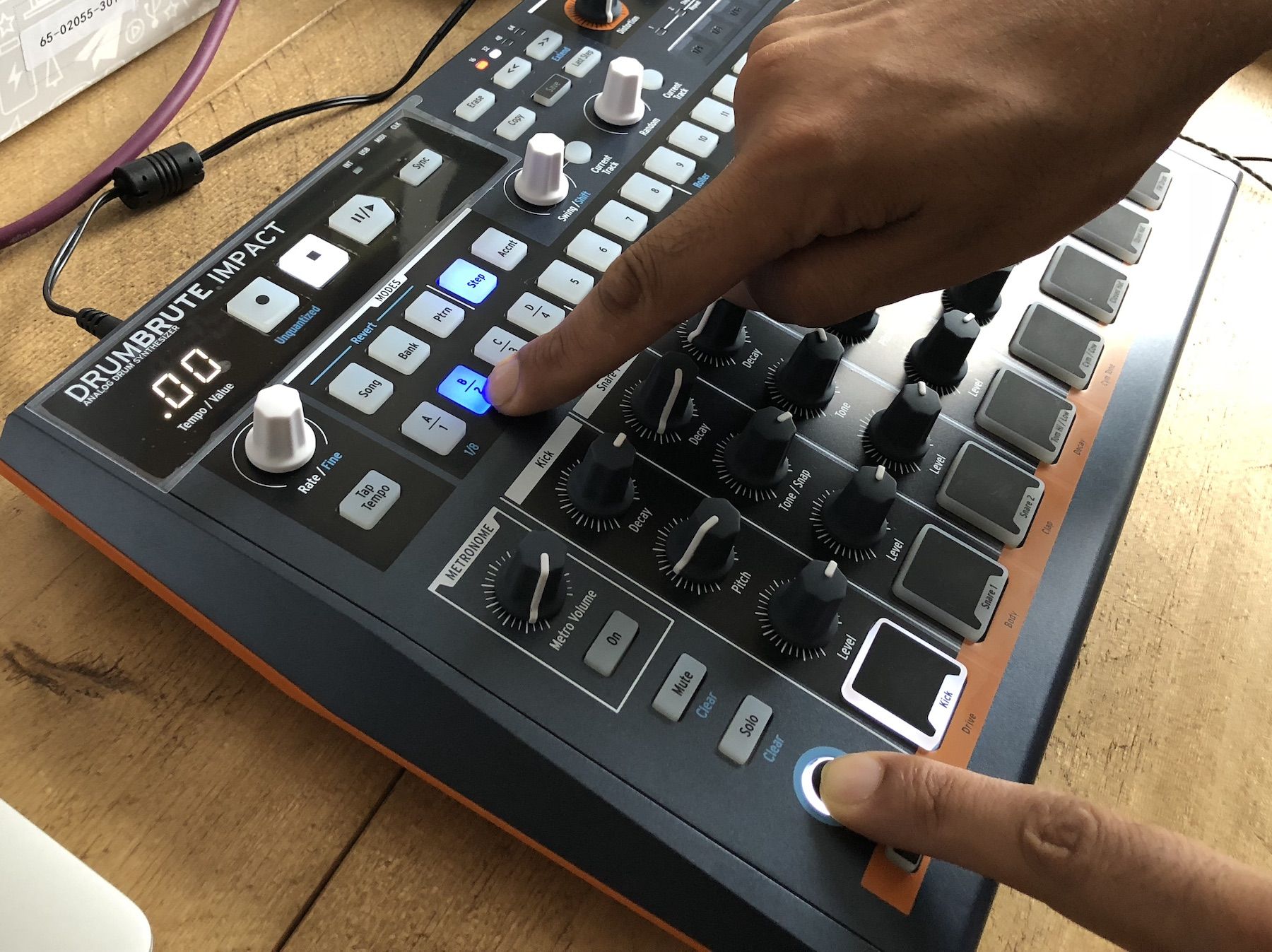 This is super easy and very effective with the right kind of pattern. Simply hold down Shift and press one of the first five step buttons to switch the current time division away from 1/16 to another value for instant speed up or half-time effects with your pattern. 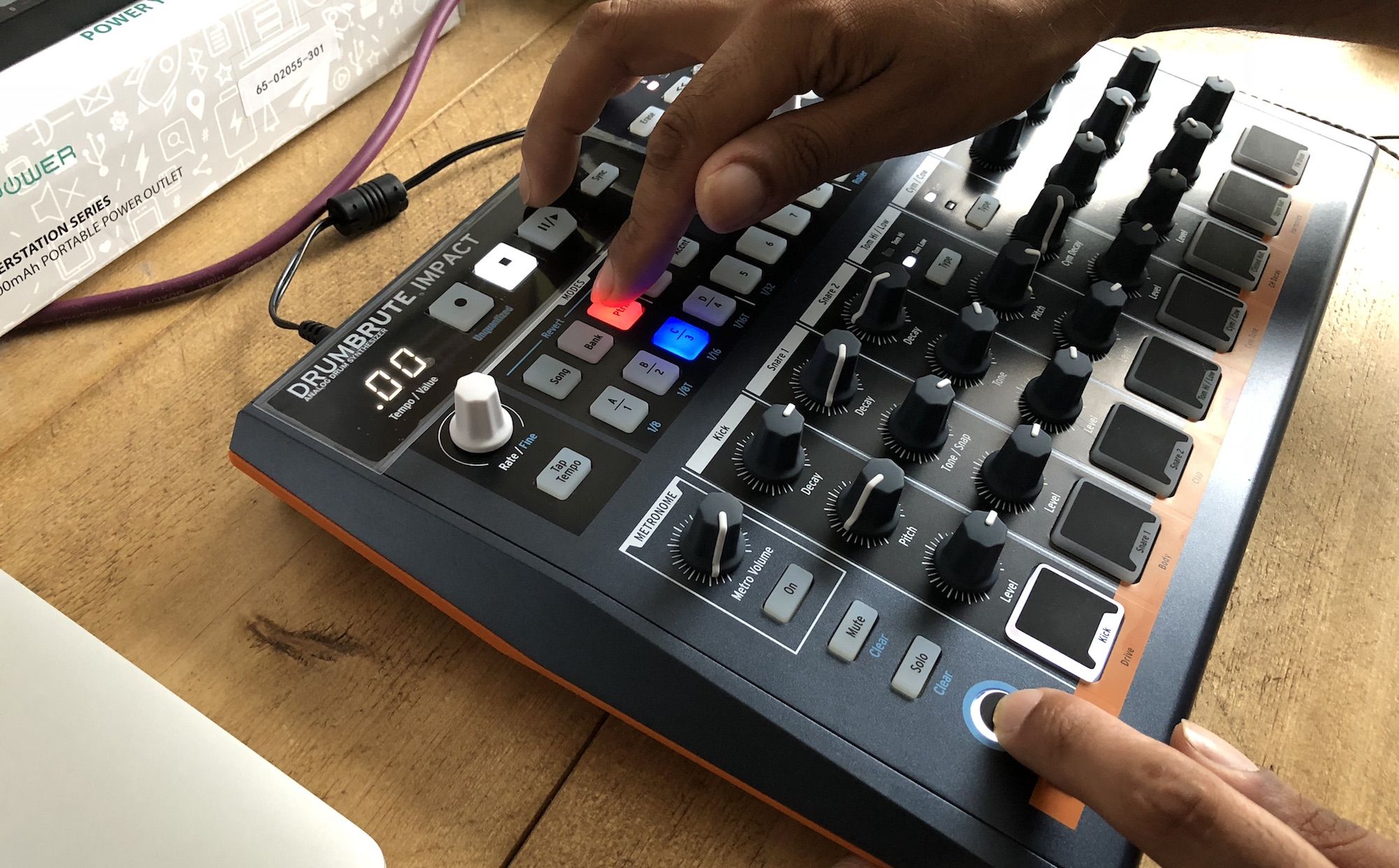 So you're jamming away modifying the steps in a pattern and giving it a completely different feel, but you want to return to the saved state of the pattern in an instant? DrumBrute Impact makes it easy.

Make sure you have your pattern selected (it can be in playback or non-playback mode), hold down Shift and the Ptrn button. Your current pattern will revert back to the last saved state.

Watch & Read our video overview of the Arturia DrumBrute Impact here (and watch the video only below):

More about DrumBrute Impact on the official Arturia website: https://www.arturia.com/products/hardware-synths/drumbrute-impact/overview