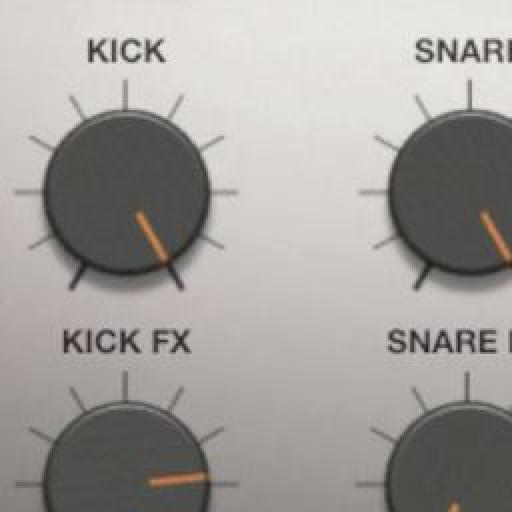 Language
Smart Controls in Logic Pro X enables you to control multiple plug-ins from a single, uncluttered interface. Sweet! Here's 5 quick tips to get you started on your Smart Controls journey.

Let's say you've got a track with a Software Instrument and 4 or 5 effects plug-ins. Now, you're playing with this track and want to adjust controls from every plug-in. In Logic 9 (and most other DAWs) you'll need to open all these plug-ins to be able to adjust the parameters from each one in real-time! Not only does this feel a little crowded on smaller displays, but it's a messy solution with redundant controls displayed that you probably don't need to adjust. Solution? Logic Pro X's Smart Controls!

If you've used Apple's Mainstage, the concept of creating your own GUI complete with sliders, knobs and buttons for multiple effects or channels may be familiar to you. And Logic Pro X's Smart Controls echoes some of that by combining parameters from effects and instrument plug-ins from one Channel Strip in one easy to access panel.

Starting with the basics, in this article we'll take a look at 5 ways to get smarter using Smart Controls.

Once you've created a software instrument channel strip and insert an instrument of your choice from the Library (in my case I've chosen the trusty ES E). You can view the Smart Controls panel using these three ways: 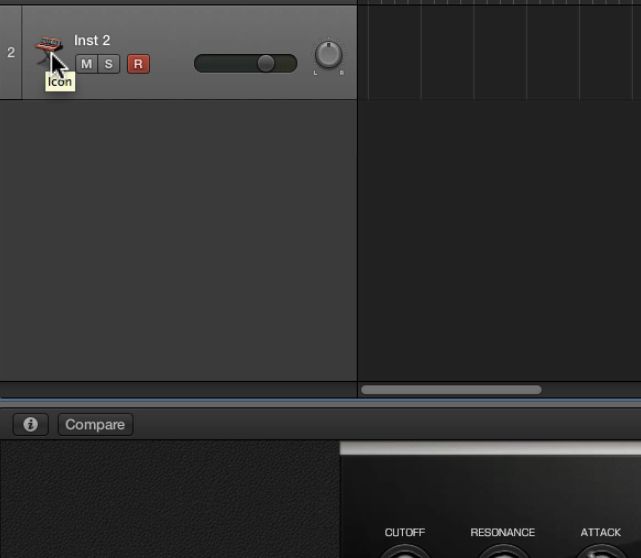 Double-click the image icon on a Track Header to open the Smart Controls panel.

You'll notice that for every software instrument or channel strip setting, an auto-mapped Smart Control panel is displayed... ready for you to start playing!

A basic Smart Control for the ES E.

So, we started with a humble single instrument on the channel strip. Let's add an audio effect, for example the Echo plug-in, by clicking on the “Audio FX” slot of the channel strip in the Inspector. 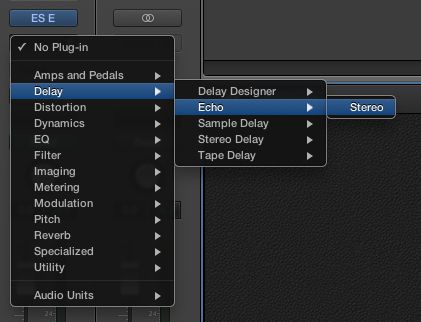 Selecting the Echo plug-in in a channel strip.

If you've adjusted a control you may wish to reset it to its default value. To do this simply Option-click the control. You can also click on the white dots at either extreme of a knob to set the value to either extreme.

Use the white dots to set the control to extreme settings quickly.

It's also worth noting that clicking on the “Compare” button in the top-right of the panel will toggle between the current settings and the saved settings for those parameters which have been mapped.

If you need to access the instrument or effect plug-in window quickly, rather than toggling the Inspector and mousing over to the required slot, simply Right-click or Control-click on the knobs, slider or button in the Smart Controls interface and choose “Open Plug-In Window”. 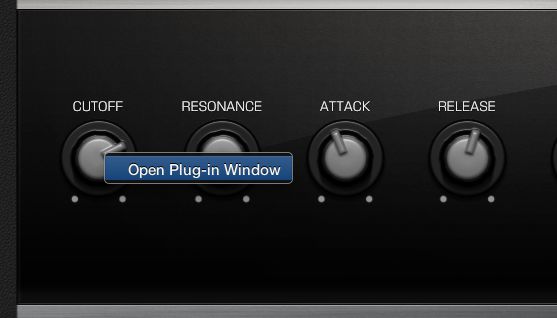 Accessing the full plug-in GUI is only a right-click away!

So, in Tip 1 I was holding back... There are actually four ways to enable Smart Controls. The three in Tip 1 open the Smart Controls panel which has limited resizing potential and is part of the Main window.

Let's say you're aiming to perform live using Smart Controls, or have simply setup your Logic Remote on your iPad so you can slouch on that comfy sofa away from your desk... Choose Window > Smart Controls

Smart Controls now appear in a floating window, which can be resized as large as you like! 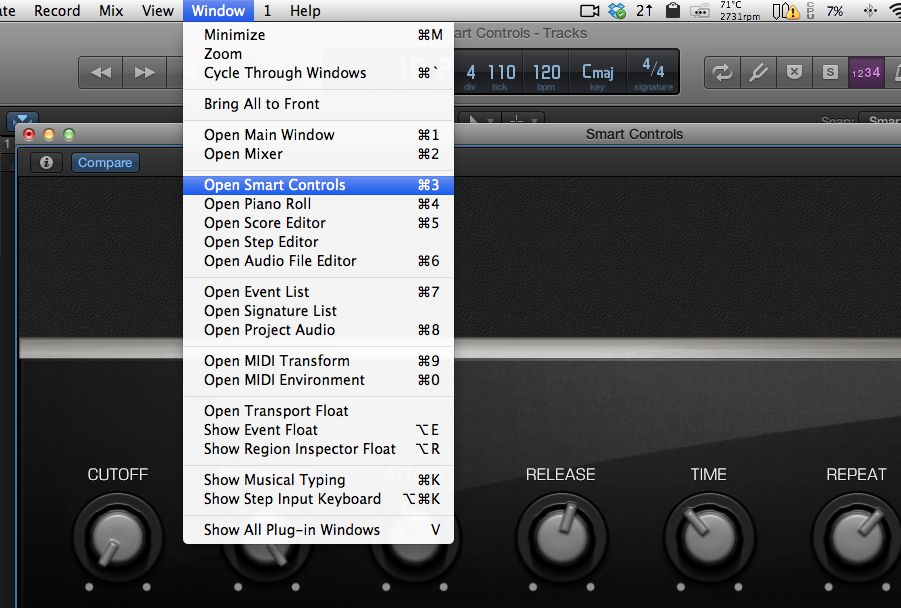 Make your Smart Controls as large or small as you need when you open it in a separate window.

So you've hidden away the Inspector again haven't you... But all is not lost. You can insert MIDI FX directly from the Smart Controls panel or window!

In the top right of the panel and the window you'll the Arpeggiator button (5 bars in the shape of a roof). Click here and a pop-up menu appears where you can adjust the most commonly needed Arpeggiator settings, like Note Order, Rate, Octave Range, as well as the presets. 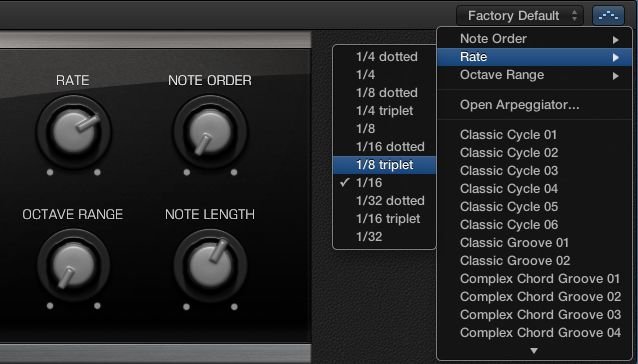 It's very convenient having access to the Arpeggiator in the Smart Controls menu bar.

And if you need to do deeper you can open the Arpeggiator MIDI FX plug-in window from the same drop-down menu too.

The Apple Logic team have done a great job making it easier than before to control multiple controls from multiple plug-ins in one easy to use panel. Thanks to its clean and consolidated interface Smart Controls looks set to be useful in both live performance and studio environments.

And we've just scratched the surface of what's possible in Smart Controls. To learn more check out these video tutorials by SFLogicNinja (David Earl).

Christopher
Question: Can you map Smart Controls for third party plugs like Waves? I assume it's probably not a problem, but seems worth asking. Can't wait to update my macbook so I can get Logic X!
Rounik
Hi Christopher.

Yes. you can. I didn't have time to go into it in this article (and it was designed to show some workflow tips as opposed to a step-by-step)... but, Yes!

You can map any of the controls to a 3rd party plug-in control of your choice. It's as easy as mapping Logic's plug-in settings :-)

David Earl does an excellent job of showing this in his video course.


Christopher
Thanks Rounik! I really think Logic has manifested itself into the best DAW on the market.
Rounik
It certainly is very, very good!

Personally, I can be slow to warm to change... but Logic Pro X won me over after about one day of use.

shiftjam
Hi rounik,
I have a a couple of questions:

1. Can I build my own custom layout? It seems that the templates are allowing more or less 12 knobs and as a starting point I want to control vol, mute, solo an pan on omnisphete, stylus rmx or trillian. In mainstage you can create templates that I can use in logic x?

2. How do you save a smart control template? Lets say I don't like the way logic maps my plugins, make the changes I want, how do I make this the default setting?

1. By custom layout do you mean your own graphical elements like in MainStage? Not exactly. There are preset layouts you can use:
- Click on the "i" button
- click on the name "Automatic Smart Controls"

I'd highly recommend checking out this video tutorial for more info:
http://www.macprovideo.com/tutorial/logic-pro-107-smart-controls

2. To save a Smart Control layout/setup simply save the patch in the Library. Your channel strip setting (patch) and smart control mapping layout will be saved together.

Thank you for the fast reply.

I have already checked all the templates and from what I can see the templates will give you around 12 knobs, this is why I've asked if you can make your custom layout. I am not interested in having my own background or faders, I am more interested in having my own template for omnisphere where I can have as many knobs and buttons as I want to suit my workflow(8 faders for volumes, 8 faders for pans, 8 buttons for mute and 8 for solos - this is a starting point for omnisphere).

my guess is that you can use mainstage for creating your own templates, but I think we will find pretty soon since logic x is only a week old and has a lot of changes under the hood.

P.s. as soon as I find a solution, I will let you know
Francis
I've downloaded and installed the optional Orchestral > Strings software instrument patches in Logic X. Many (but not all) of these patches include articulation controls (legato, staccato, pizzicato, tremolo) in their Smart Controls. However, changing the articulation settings in the Smart Controls window seems to have no apparent effect. Any patch I choose continues to play as if legato is selected no matter what articulation setting I've chosen. What am I missing?
LargerLife
My question is, (I haven't watced SFLogincNinja videos yet) is it possible, to map multiple parameters to one knob on the SmartControl interface, like in Ableton Macro knobs on racks.
shiftjam
@Larger life

Yes, you can assign more then one parameter to a single knob. I made a short tutorial for you. EnJOY!

http://www.youtube.com/watch?v=d6Ydl0cE9CQ&feature=youtu.be
Peter Schwartz
Francis, if you're referring to Full Strings+ for EXS, yes, it contains 'hidden' articulations. You have to "unlock" them, however. You can do that easily and quickly by setting the first slot in the modulation matrix to Source: (your choice), Destination: Articulation ID. In fact, I've written a script for Scripter that lets you conveniently select these sounds from a menu (and more!). It'll be available as part of an upcoming article on the Scripter, so stay tuned!
logicxnewbreed
Yes you can completely customize the GUI of smart controls . You can change their default settings thru frameworks / resources . You def won't see that on MacProVideo lol !
shiftjam
Thank you for the response @logicxnewbreed.

Can point in the right direction with this(forum, tutorial, explanation) on how to do it?

You are the man to ask the following question.

Can I trash those tutorials like how I trashed the FCP tutorials when FCP X was released?

Can I use all the MacProVideo Logic Pro tutorials to learn Logic pro X?

Thanks in advance for your guidance.

The Logic 9 courses are still relevant... however, due to the new GUI and some altered functionality... I'd wait until early next week for the new range of Logic Pro X courses which are coming and will cover every nook and cranny :)

I'd still keep the LP9 tutorials on mixing and the like, but you'll find the current one that deal with Track Stacks, Flex Pitch, Smart Controls etc cover all these new features in depth and will change the way you use Logic IMHO.