So you've fixed some of your solo producer bad behaviors... but there are more ways you could improve! In this new instalment, Joe Albano explains how.

For many years now, a lot of music has been made by solo producers and artists, doing the “one-man-band” thing in the privacy of their personal studios or bedrooms. This way of working can often produce good results, giving a creative individual a better chance to realize his/her unique vision for a song or musical arrangement. But working without collaboration and feedback from others also brings its own set of potential problems and limitations to be on the lookout for. A while back we published a popular article - 5 Mistakes to Avoid For The One-Man Band / Solo Producer - that offered a few suggestions about possible issues faced by the solo artist/producer, which many people seemed to find helpful. So, as a followup, here’s another five potential concerns for those working on their own...

1. Don’t be too married to any one idea/part/melody/effect 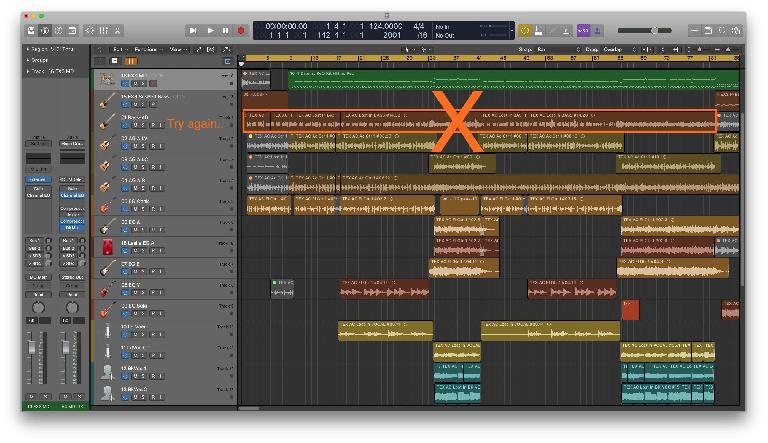 When artists and musicians collaborate - even when one individual is clearly the band leader or producer - there are always plenty of suggestions being thrown around for different parts, arrangement ideas, and alternative melodic and harmonic possibilities. And when a number of musicians are working together on a project, sometimes even accidental contributions from one of them - a mistake or misinterpretation of a part - can lead to a beneficial change to the song or arrangement. But working alone doesn’t provide that kind of opportunity for happy accidents, or the benefits of having a soundboard for ideas. Too often, a solo artist can come up with a good idea, but one that just doesn’t seem to be working as expected.

When that happens, there’s a strong tendency to double down and assume that the problem is simple execution, when in fact it may be that the idea itself just doesn’t work. It’s important that anyone working alone, who confronts a persistent problem getting some musical bit to work as hoped, be willing to just put it aside at some point, and try to come up with a different approach to that part of the song.

This can be difficult when you’ve got a certain idea in your head, and it may require taking a break from that particular part or even stepping away from that song entirely for a brief period, and then coming back to it fresh later or the next day, at which point your musical subconscious may be cleared enough for some alternative ideas to pop up, one of which may turn out to be a better way to go. 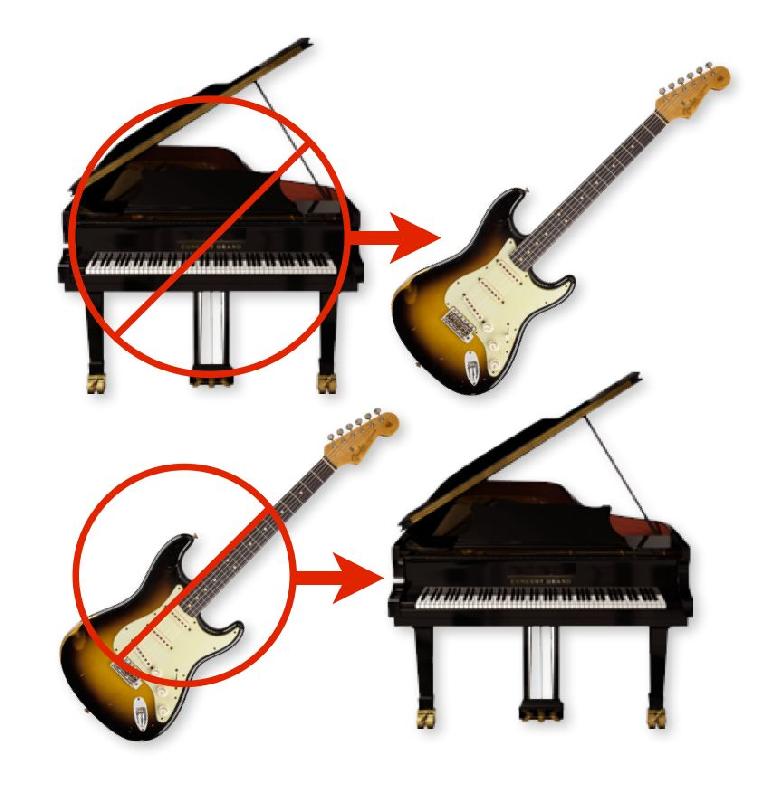 Many songwriters tend to follow a familiar approach when coming up with musical ideas: they sit down at their main instrument - piano, guitar, drums, whatever - and try out chords, melodies, rhythms, etc. But as any musician can tell you, it’s very common for players to fall into certain characteristic gestures that just naturally fall under their fingers - certain chord progressions, riffs, or melodic contours that their fingers gravitate to subconsciously. This is nice when it comes time to, say, improvise a solo - a player with a personal musical vocabulary at the ready can use this to his/her advantage in performance, imparting his signature style to key musical parts.

But at the earlier stages of creative expression, it can sometimes work to a composer’s or songwriter’s disadvantage. A player letting his fingers lead him around the keys or strings can develop the tendency to all-too-often fall back on similar-sounding musical ideas and expressions. This could result in a degree of “sameness” for all his songs, something others may readily pick up on as a negative impression, but that the artist himself may be totally unaware of. Or, conversely, the songwriter may become acutely aware of his/her own creative repetitiveness, and become frustrated at his inability to come up with fresh ideas.

One good way to address this is to try working out new songs/projects initially on an instrument that’s not your main axe. Obviously it would have to be something you can play, but it doesn’t have to be something you have a lot of facility on. In fact, having more limited skills on a certain instrument may result in ideas that wouldn’t have happened if applying your fullest degree of musical chops. For example, if a keyboard player whose fingers naturally gravitate to a certain chords picks up a guitar, a lesser facility with chordal shapes may result in  more experimental fingerings, and produce some welcome new sounds.

Even with the same instrument, sometimes trying out ideas in different, unfamiliar, or especially awkward keys (like maybe Eb or F# on the piano) might force some fresh sounds out of newly disoriented fingers. Whatever method a solo artist might be able to use, stepping out of his/her instrumental comfort zone is a highly recommended way to shake off the “same-old” blues, and go down some fresh paths.

3. Don’t give short-shrift to the parts/instruments you don’t play 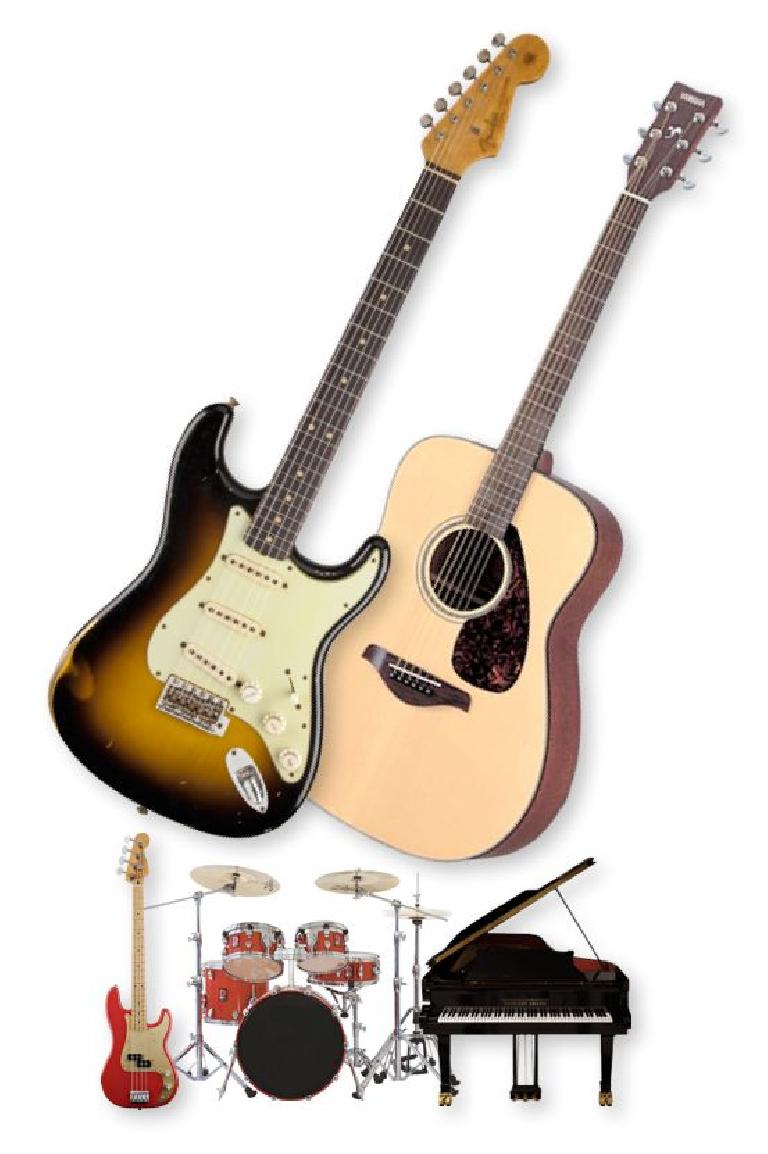 Also relating to the whole area of primary instruments vs secondary instruments, another thing to watch out for is that music and arrangements aren’t weighted too heavily toward the artist/producer’s primary instrument, with other parts getting short shrift. Now, of course, it’s fine for a song to have the artist’s main axe featured more prominently - that’s often part of his/her musical signature. What I’m referring to are arrangements where some parts are musically and creatively rich, while others are clearly overly simplistic and perfunctory.

You often hear recordings where some of, say, the rhythm parts are very creative and interesting, but other equally key components of the arrangement - like the drums or bass - are lackluster. A guitarist’s solo recording may combine great guitar licks and rhythms with boring block chords on the keys, unimaginative root notes in the bass, and overly repetitive, undistinguished drums (assuming a genre which normally features more subtle variations in the drum part).

In the old days, listeners would sometimes refer to this as “demo-itis” - lacking independent input from other creative types or an independent producer, the recording has a less-finished feel to it that it should, regardless of the level of technical quality.

It’s important for those working solo to pay special attention to the parts they create for instruments they don’t play, or that are not their main instrument. It may be necessary to spend even more time on those parts, fine tuning and embellishing them, than is spent on what would be more prominent/featured elements of the arrangement that are played on the artist’s main axe. Sometimes this might be one of the areas where it becomes necessary to deviate from the solo approach, and bring in a little help, but if that’s not an option (often the case), then it may be time for a little extra homework. Putting in some extra effort to gain better familiarity with the kinds of musical gestures and subtleties that make up a better “performance” on those less-familiar instruments can go a long way to alleviating the kind of cognitive dissonance that results from a clear imbalance of musicality between different parts in a solo production.

4. Don’t rely on your favorite presets 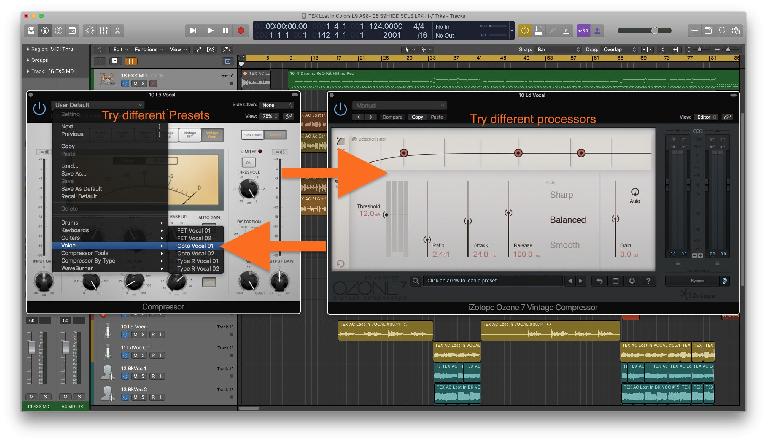 Switching over for a minute from musical creation to production and mixing, this suggestion is probably a fairly obvious one, but since I often see people working on a project pulling up their favorite presets over and over, I guess it bears repeating. If you listen to number of commercial mixes in a particular genre, you’ll notice that while they may all share certain overall similarities in level, general tonality, ambience, etc, they’re also distinctly different. Even the same artist may enjoy noticeably different production values from project to project.

As a mixer, I know how easy it is to get attached to certain approaches to processing - favorite EQ for the kick and snare, a preferred slap on the lead vocal, consistently doubled/hard-panned rhythm guitars or keys, etc. But if I were to save these settings as presets and utilize the same processing and effects on every production, well, the tracks would probably sound fine, but would most likely take on a kind of “sameness” - this time regarding production values. This can easily happen when a solo artist/producer is or has been focused on the musical aspects, and then turns to production considerations at the end of the process.

While it’s a good idea to bring some consistency to mixing and production - overall drum levels, or a consistent, genre-appropriate approach to general ambience - it’s also a very good idea to make a point of trying different processing and effects regularly, perhaps to help redirect the creative juices toward the production side, when the time comes. Even if you have a certain desired effect in mind, dialing it up in a different (maybe third-party) plug-in could result in a distinctly different take on that effect, and inspire other creative ideas to boot.

There are plenty of way to mix it up - alternate drum samples, similar but slightly-different synth patches, alternative amp sims, specialized (tape-emulation) delay lines, etc. Sometimes if the parts were laid down with certain sounds, altering or tweaking those sounds significantly at the later mix stage can really put a whole new spin on the production, and that’s likely to be a good thing.

Finally, I’ll wrap up with a brief reminder that when it comes to creative endeavors - any creative endeavors, but especially solo ones - that creativity doesn’t start and stop when you sit down to begin work on a project. The musical, lyrical, and production ideas that flow out of your right brain are going to be based on what you’ve been taking in all along - if “you are what you eat”, then you definitely “are what you listen to” when it comes to music. I have friends and acquaintances who tend to consistently call up the same playlists when they listen to music for enjoyment, and that’s fine - nothing wrong with kicking back to your favorite tunes. But it you’re a creative type, and especially if you’re going to be creating as a solo artist/producer, then it’s important to fill your head with more than just the “same-old same-old” tunes when it comes to your casual listening.

Without the benefit of others’ contributions, all the musical ideas will be coming out of you, and if there’s little in there except a relatively short list of desert island favorites, there’ll be less variety to pop out when you’re up against that blank page. Even musical styles you’re not overly fond of can offer some interesting creative ideas, both consciously and, more importantly, subconsciously, and the wider the range of music you absorb the more you’ll have to work with when it comes time to roll your own.

So that’s it - hopefully these observations will also prove helpful to some of those intrepid one-man-band solo artists and producers out there, struggling to wear all the hats and still come up with the best possible music they can make.

Learn more audio and production mistakes to avoid in the AskAudio Academy.
Prev 1/5 Next
1Don’t be too married to any o... 2Don’t alway write on your mai... 3Don’t give short-shrift to th... 4Don’t rely on your favorite p... 5Don’t stick to the same old p...