5 Mistakes To Avoid When Programming Drums

Language
When programming drum patterns, especially if you're trying to emulate a live drum performance, there are some things you just shouldn't do. Here's five tips from Joe Albano to make your drums shine.
Prev 1/5 Next
1Introduction 2Page 2 3Page 3 4Page 4 5Page 5

Many drum instruments these days come with a comprehensive collection of patterns and fills, which can be a great help creating a drum part, especially for arrangers/songwriters who don’t play drums themselves. But sometimes there’s no substitute for creating a custom drum “performance”, for a better, more musical blend with other tracks. With a little practice, and some careful listening to appropriate drum performances—especially live drum tracks from the best drummers—it’s not too difficult to get the hang of creating basic drum parts. There are a few typical mistakes you can make, especially when trying to emulate the sound of a live performance, that can negatively impact the musical effectiveness of the drum part. Here are a few suggestions for avoiding some common mistakes in drum programming. 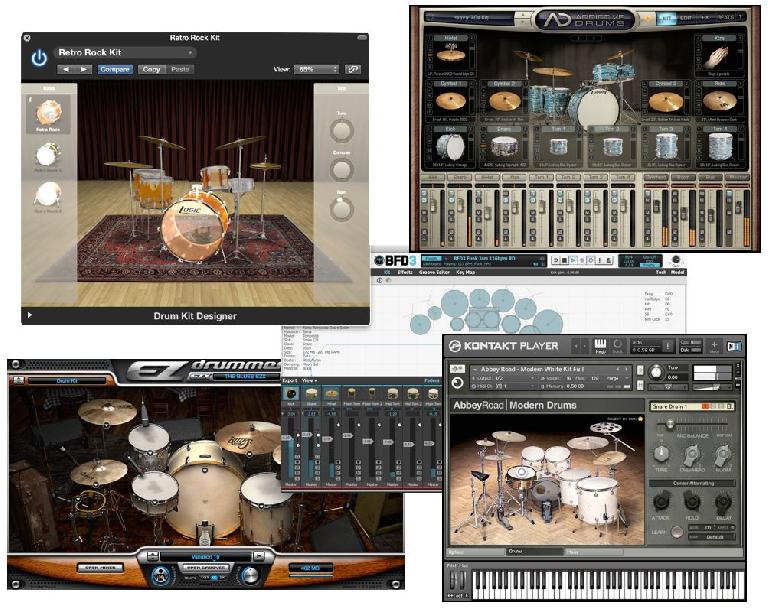 It’s a pretty obvious piece of advice—don’t make the drums too busy—but even so, you often hear over-“played” drum parts that end up stepping all over vocals and other musical elements. Some of the best drum performances are basically very simple grooves (think of the very simple beat in “Billie Jean”)—in fact, I think most drummers would agree it’s harder to play a really tight, solid groove well than a busy part with lots of fills & figures. The trick is to find just the right balance between the basic groove and the extras—appropriate fills and gestures that enhance, rather than detract from, the arrangement as a whole.

Both the basic beat itself, and the extra flourishes, need to be conscious of what the other musical parts are doing, and work with them—just as a live drummer would be listening and reacting to the other musicians. Of course, you’ll want the groove to be appropriate for the style/genre and the overall vibe of the song. Just how busy the groove is should also take into account what other rhythm instruments are doing—are there lots of slow pads, leaving plenty of space for a more elaborate pattern, or are there busier rhythms in the guitar/bass/keys that the “drummer” won’t want to step on?

When it comes to fills, that can be a little tougher, since the drums are often laid down/programmed before the arrangement is complete. What I frequently do is create a very basic drum part (ideally with at least a lead (or scratch) vocal as a reference), with the groove as close to what I think it should ultimately be, but with very simple “placeholder” fills—just to let other musicians know where a fill will likely be when adding their parts. Then later, when the arrangement is more fleshed out, I can go back in and add fills that react to those other parts, which hopefully will yield a more musical result. You could either replay the entire drum track (if you’re “programming” in real time) or just break the pattern and add fills and flourishes in the most musically appropriate spots.

Even though you don’t want your drum parts to be too busy, you also don’t want them to be too simplistic either. A drum track that just sits on the groove—even if it’s a good, solid groove—may be missing out on the opportunity to push the energy of the song when it could use a little boost, and one of the ways drum parts do this is with fills. By breaking up the beat with a fill, you can not only add an exclamation point to a moment of musical excitement, but also make the groove feel that much more satisfying when the drums lay back into it after that brief interruption. Now, the art of programming appropriate, musical drum fills could be a whole article in itself, but here are just a couple of things to watch out for.

Audio example 1—A few fills (every 4 bars), from simple to busier:

Quantization can be both a blessing and a curse, especially when it comes to programming drums. If you’re tapping in drums from pads or a keyboard, and your timing is not quite as tight as it needs to be (it can be awkward to play drums well from small pads or keys), then quantizing can often save the day. However, it can also strip the performance of any sense of musical groove, or feel, making for an overly stiff, mechanical-sounding part.

Now, for some musical genres that’s exactly what you want for the drums. A rock-solid 100%-quantized groove provides a steady anchor, and the other instruments and vocals provide the more subtle rhythmic variations. But for styles where the groove and feel needs to come from the drums, quantizing the timing to perfection can be the death knell for the “feel” of a track. Fortunately, most Quantize settings offer the option of “Partial Quantizing”. This may go under different names, but it involves a Quantize percentage. 100%—full quantization—provides rhythmic perfection, moving all drum notes precisely to the nearest gridlines, but lower settings move the notes only part of the way to the grid, tightening up a performance that may be a little too loose, but does have a desirable feel, which is now preserved, to some degree. 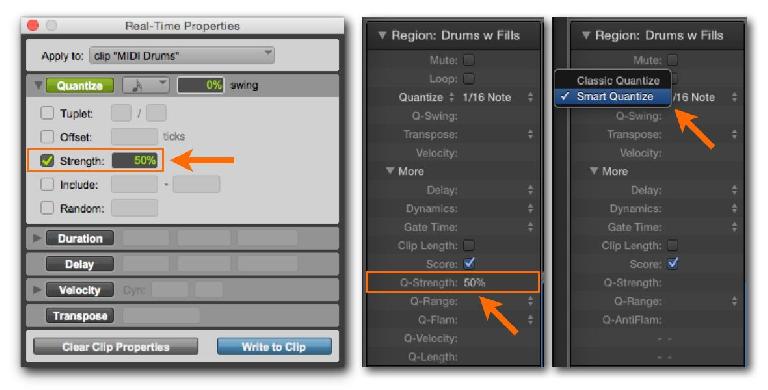 Recently, Logic X introduced another alternative, dubbed “Smart Quantize”, which analyzes the part, and provides partial quantization while preserving subtle rhythmic figures likes flams and ghost notes, which are often messed up when quantizing, even with traditional partial quantization. When quantization is deemed necessary, modern “intelligent” quantization algorithms like that can go a long way to cleaning up timing without sacrificing performance nuances and musical feel.

Not every drum part is meant to sound like it was played by a live drummer, but when you’re programming drums that are supposed to sound like a live performance, one key aspect of keeping it real is to avoid programming a part that would be unplayable by an actual drummer on a physical kit. One of the most obvious mistakes, in this regard, is the hi-hat pattern that continues under a fill—something that would require more than two hands. It may not sound bad, but when the goal is realism, it brings a little subconscious cognitive dissonance to the drums, and is a dead giveaway of something artificial.

If you listen to real drummers’ performances, you’ll hear that what often sounds like a seamless rhythm actually has notes dropping out here and there, as the drummer needs both hands to do something else. But a skilled drummer can shift his attention from one element of the kit to another so seamlessly that you won’t consciously notice the interruptions unless you’re looking for them. Here’s an example within a groove—a drum beat with 16th-note hi-hats. The hi-hat notes sound continuous, but the drummer actually skips the hat on each backbeat, because he needs that hand to play the snare (Audio example 2).

A seemingly-continuous 16th note hi-hat part actually has the hat dropping out on the (snare) backbeat.

Audio example 2—The pattern in Fig 3: a seemingly-continuous 16th note hi-hat part with the hat dropping out on the (snare) backbeat:

Whether or not to maintain the kick or hi-hat pedal through a fill (which is technically possible) is more a matter of choice—figuring out what various drummers do in similar arrangements can provide some guidance.

One of the most important aspects of a good drum performance is dynamics. The sound of a drum (or cymbal) changes considerably when it’s hit from soft to hard, and dynamic variations—accents—can make or break a groove, especially a simple, solid groove. If you’re programming drum notes in via step entry, don’t forget to vary the MIDI Velocities for the appropriate accents, to make the part sound more musical. For example, when playing a typical 8th-note hi-hat pattern, drummers commonly accent the hi-hat notes that fall on the beats (1,2,3,4) more than the ones that falls on the “ands” (1 & 2 & 3 & 4 &). Kick drum patterns are often made up of accented and un-accented notes. And repeated-note riffs on the same ( or multiple) drums also sound more musical when accented appropriately. (Listen to audio example 3 below)

Of course, dynamics/accents won’t add anything if the drum sounds themselves aren’t programmed to respond to different MIDI velocities with not just level variations, but tonal variations as well. Drums should sound louder, brighter, and have a sharper attack when played harder. Most high-end drum instruments provide velocity-switched layered samples to accomplish this, but not all do, so it’s something you should be aware of. While some drum parts and musical genres are much less dependent on natural-sounding dynamics, when a traditional musical response is called for, you’ll want to make sure the drum kit is up to the task.

Obviously, there’s a lot more to be said about drum programming—both dos and don’ts—but that’s all the room we have here. The most important thing is to get to know how the best drum tracks are put together—a little listening and analysis of the drum parts/performances in songs that kick ass in the rhythm department can go a long way to making your own drum parts really take off.

Learn a ton of tips, tricks and techniques for programming drums and more in The Academy.
Prev 1/5 Next
1Introduction 2Page 2 3Page 3 4Page 4 5Page 5