5 Mistakes To Avoid When Mixing With Delay-Based FX

Language
Music production rules are often there to be broken. Here are five essential mistakes to avoid when using delay-based plugins in your productions, along with extensive tips to do it right.
Prev 1/5 Next
1Mistake #1 2Page 2 3Page 3 4Page 4 5Page 5

Delay-based processors are responsible for some of the most widely used and classic effects both on stage and in the studio. Shorter delays give us Flanging and Chorusing, along with electronic Doubling (as an alternative to performance-based doubling). And longer delays, of course, provide echo—this application ranges from the simple, classic slap echo (heard on tracks since the ’50s—Elvis anyone?), to the complex musical delay-based rhythmic patterns often applied to instruments—see The Edge).

Many FX boxes and plug-ins come with internal preset versions of these effects, but often an engineer or mixer will want—or need—to roll his own, using a standard delay processor. Even though the setup for most of these is fairly straightforward, it’s still possible to end up with settings that cause problems, especially in context. With that in mind, here are 5 quick “Don’ts” for using delay-based processing. An obvious consideration of delay-based effects is matching the effect to the part. One problem that can sometimes trip up the intrepid delay-user is leakage—when signal from an instrument is unintentionally picked up by the mic for another instrument or voice. Leakage can be bad—unpleasant phasiness—or good—added air and ambience. But when it comes time to apply effects—especially delay-based effects—things can get trickier.

A very simple, and common, example would be adding a slap echo to a lead vocal. Normally this is pretty straightforward, but in some situations—like a band on a small stage—it’s very likely that louder instruments like the snare drum will leak into the vocal mic. The live/studio mixer may find a good delay time that complements the vocal, but it may not necessarily be a Tempo-based delay time (in time with the beat). When the drum leakage in the track hits that delay, it’ll result in off-time drum hits trailing off each beat—depending on the specifics, this can be musically disastrous.

Obviously, the best solution is to avoid the leakage in the first place, but that’s not always possible. You could try to achieve the desired echo effect with a Tempo-synced delay time, though that may also prove impossible in a live situation, where the only viable choice may be to minimize the level of the effect. Mixing tracks with leakage in the studio may offer further options. A Noise Gate could be applied to strip away leakage in-between the original signal’s phrases, or audio repair software could be pressed into service to try to remove unwanted leakage under the voice. The echo itself could be more selectively applied—perhaps to only some words or phrases—though that may not achieve the desired overall effect. If all else fails, the worst-case scenario may simply require a re-thinking of the use of the echo effect—pulling it down or out, as the situation demands.

2. Don’t get into Double-trouble Typical settings for Doubling, in mono (Top) and stereo-panned (Bottom)

Artificial (electronic) Doubling is one of the most common techniques in mixing. Doubling, in general, tends to be frequently utilized to build up thickness, and the tight doublings provided by short delays (of 15–20 milliseconds or so), often along with wide panning, are great way to enhance and spread out various parts in an arrangement.

In fact, it’s so popular, that it may tend to be overused these days—you’ll often come across a mix where everything is so doubled and layered that all the parts end up as kind of a background wash. The pleasant thickness and spread added can obscure detail in individual performances—the subtle, musical timing nuances of a rhythmic figure, for example, may be lost to the slight (though pleasant) smear that occurs when the part is doubled with a short delay.

One specific thing to watch out for is the use of doubling on the lead vocal. Doubling the lead can be a seductive proposition—it offers the opportunity to nicely thicken up a weaker tone, and to widen it subtly, along with smoothing over any shaky pitchiness (without turning to the possible overkill of auto-tuning). But doubling can have a side-effect—it may tend to push the vocal back further in the mix. A strong delay blended with the original vocal will often create the impression that the vocalist is further away, at some distance in the virtual soundstage, maybe even behind the backline (the other instruments), no matter how loud the part is mixed. This can rob that all-important lead vocal of its immediacy, which will have a negative effect, especially with more intimate musical arrangements.

Audio Example 1 A doubled lead vocal (doubling kicks in at bar 3): Doubling can sometimes push a lead vocal too far back in the virtual soundstage:

So a little care is in order. A more subtle application can provide the desired thickness and spread, while still maintaining the necessary presence of lead vocals (or other parts), at the foreground of the mix, where they belong.

Chorusing—in theory the simulation of the rich blend of multiple performers playing the same part—is achieved by the same short delays as Doubling, but with added Modulation of the delay time. A Modulating signal—typically an LFO—is applied to the delay, periodically varying the set delay time by several milliseconds (ms). This periodic sweeping provides a much richer sound that a static delay, and the Modulation is what turns a simple Doubling into a proper Chorus effect.

The Modulation controls are Rate and Depth. Rate sets how fast the LFO will run—how fast the periodic delay-time variations will be—typically ranging from around 1 Hertz or less (≤1 cycle/second), for a slow sweep, to faster times (up to several Hertz), for a faster, more “shimmering” effect. But whatever Rate is chosen, the key is finding the proper Depth setting to match. Depth determines how much the Modulation will vary the manually-set delay time. For example, if the delay is set to 15 milliseconds, a lower Depth might vary it between 14 and 16 ms, while a higher Depth might range between 12 to 18 ms, or more.

One of the psychoacoustic side-effects of the Modulated delay is a slight de-tuning effect. This is similar to the slight pitch variation that would inevitably occur between two or more performances of the same part, and is an integral component of Chorusing. But if the Depth is set too high for the chosen delay time and the specific instrument or vocal, that subtle de-tuned effect can become a sour out-of-tune effect. It may not be that obvious in isolation, but when the Chorused track is heard in the mix, it may rear its ugly head.

The usual rule of thumb is that slower Modulation Rates can tolerate (and welcome) higher Depth settings, for nice deep, slow chorusing, while faster Rates will usually need the Depth to be dialed down, for a more subtle shimmering effect. It’s easy enough to find an appropriate setting, but just be sure to keep an ear open for how the effect works in context of the full, finished mix. 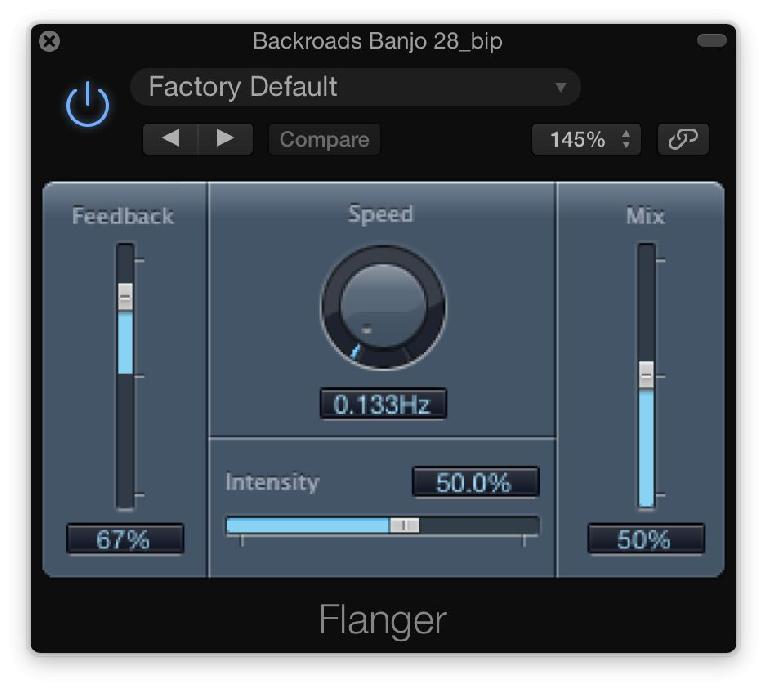 Like Chorusing, Flanging utilizes short delay times and Modulation, but with some differences. The delay times are much shorter—less than 10 ms, with the strongest, most characteristic Flanging effects produced by the shortest times, around 1–2 ms or less. While Chorusing brings a smooth, rich, subtly-shifting thickness, Flanging’s shorter delays offer a much edgier, more metallic quality. The key is the use of Feedback, which runs the delayed, modulated signal back through the circuitry. This greatly enhances the edge—at the highest settings, it brings the very peaky, metallic quality of classic Flanging.

And that’s where you have to watch out. You won’t really get that classic, deep Flanging effect without a fairly high Feedback setting, but it’s easy to add too much of a good thing. A nice, sharp metallic Flanging tone, dialed up in isolation, can once again turn out to be too strong in the context of the overall mix. Just as with a Chorus’ Depth setting, you’ll need to keep a careful ear on the degree of Feedback edge—too little, and you have a bland Flange; too much and you’ve got runaway Feedback, and an overly peaky effect that jumps out pf the mix unintentionally, with negative results.

Audio Example 2 Feedback making a Flanging effect stick out too much in the mix, gradually dialed down to a more subtle setting: Delays set for a classic Slap Echo (Top), and for a pattern of musical delays, sync’d to Session Tempo (Bottom)

I touched on this briefly above, in another context. When using echoes, it’s important to be aware of how the timing of those repeats interacts with the timing of notes in other parts. With some echo effects, this may not be critical—a basic slap echo (100–150 ms) may not need to be in time with the musical Tempo (the beat), especially if it’s buried under the instrument or vocal, and has little or no Feedback (repeats). But more prominent delay/echo effects—especially those that are employed to create complex rhythmic figures from simple musical parts—obviously need to be in time with the session Tempo to be useful.

This is easy enough in the studio. Most virtual delay processors include a Tempo-Sync option, which locks delays to the session Tempo—when enabled, delay times are chosen in bar/beat increments instead of in milliseconds. In live (stage) applications, however, this can be trickier. A player who wants to make use of complex rhythmic delay/echo effects will need to estimate the Tempo the band will be playing at, and if they don’t stick to that speed, or deviate from it during a song (speedup/slowdown), the musical delay effects can be ruined.

At the most basic level, the player utilizing the Tempo-based delay effect should provide the countoff (maybe a quick soft note with the effect), or the arrangement itself could start off with that player, with the effect on, to establish the right Tempo, and hope that the band’s timing is steady enough. For bigger gigs, any Tempo-based delay effects can be sync’d to a master clock source (like a DAW), which can provide a click to the drummer(’s earpiece), to ensure that the effect and the song Tempo will always be in sync.

So those are a few things to watch out for when using delay-based effects. With the exception of more complex musical rhythmic-delay effects, most delay-based effects are relatively easy to dial up—the key is to use your ears and watch out for the subtle problems, especially ones that show up in context. With just a little care taken, delay effects can add a lot of dimension to any mix.