5 Mistakes To Avoid When Mixing Vocals

Language
When it comes to mixing vocals, the devil is in the details'"here are 5 mistakes to avoid when blending vocal tracks into an arrangement.
Prev 1/5 Next
1The Goldilocks Rule 2Squeeze the Life 3Take My Breath Away 4Push the Vocals 5Go Wide 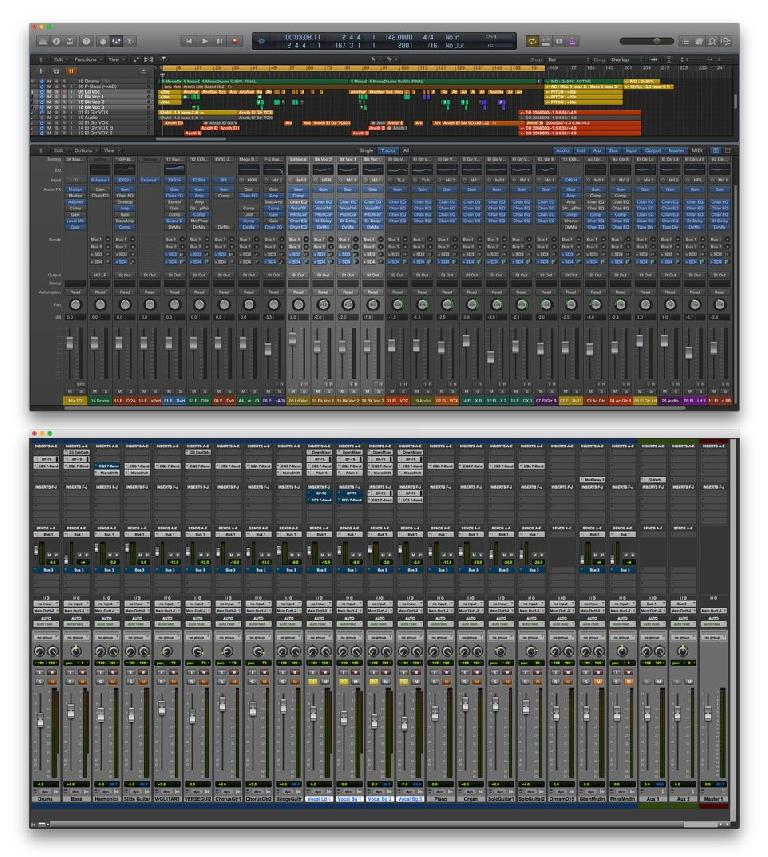 Fig 1 Various songs and musical genres may treat the vocal a little differently, when it comes to level

Ok, so this is a pretty obvious suggestion—when it comes to the level of the vocal(s) against the rest of the mix, they shouldn’t be too loud or too soft—they should be set at the level that’s “just right”. But, like I said, the devil’s in the details, and exactly what level constitutes “just right” is not always the so clear-cut. Of course, the (lead) vocal is the focus of the arrangement (when the vocalist is singing), and so it needs to be heard clearly. But there are different schools of thought as to just how loud and clear that vocal should be mixed—exactly what the optimal level will be may vary from song to song and with different different musical genres.

For example, in a lot of pop music, the lead vocal is often significantly louder than the backing track. This not only puts the emphasis of the song on melody, but also makes for the best intelligibility, ensuring that every word of the lyric comes through as cleanly and clearly as possible. But it can also make the backing track sound less aggressive, and, in a worst-case scenario, a little anemic (lacking in energy). By contrast, in many rock songs, a lot of mixers shoot for a vocal level that’s just barely above the track. While this may impact intelligibility (Mick Jagger, among others, was famous for vocal performances where people were not quite sure of the words), letting the instruments almost overpower the vocal (mixing the vocal “into the track”) can create the impression of a much more powerful, aggressive, energetic track—it’s a trick that mixers have used for years, but of course only for musical styles where a more aggressive track would be appropriate.

2. Don’t Squeeze the Life out of the Singer 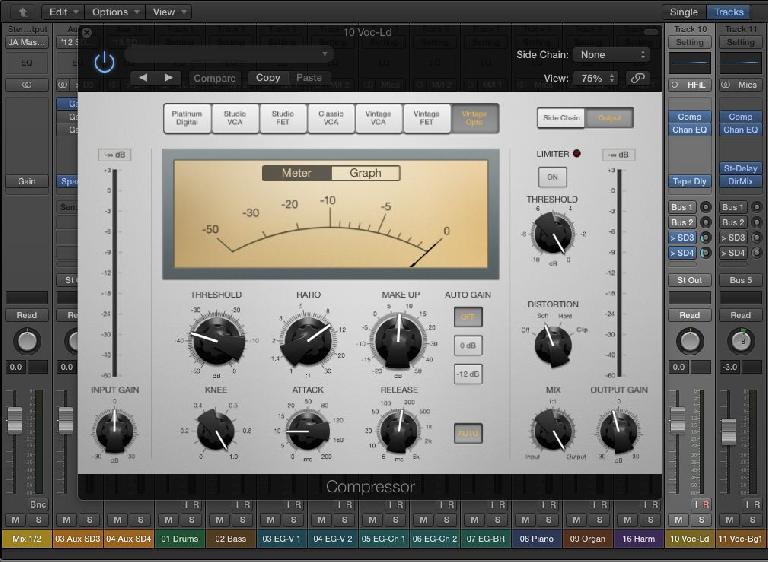 Compression is usually key to getting a vocal track to sit well against the mix, but too much compression can not only rob the performance of some of its power, but also overemphasize noises and performance artifacts. With modern arrangements, you’ll frequently run into a dynamic vocal performance, with plenty of musically expressive level swings, that’s against a track that’s consistently loud and insistent. When the singer drops in level dramatically, he/she can be momentarily buried, and sudden shouts or screams can jump out of the track too much. Of course, compression will even out these level variations, but there’s a fine line between smoothing out extreme level swings that don’t work in the mix, and sucking all the drama and expression out of the vocal performance. It can be tempting, especially for compression newbies, to even out the vocal levels so much that musical expression is compromised—the louder and softer bits should still be louder and softer, even when compressed, just not as much louder or softer as they were. This kind of judgment call is one of those mixing skills that only comes through practice and experience with compressors, in a variety of mixes.

Besides purely musical considerations, over-compressing a vocal can also bring out too much of the little noises on the track, like breaths, lip smacks, and headphone leakage, which can become over-emphasized with larger amounts of compression. That’s one reason that certain compressors are traditionally favored for vocals, particularly opto (optical) compressors, like the famous Teletronix LA-2A (or one of the many software emulations of it and other classic opto designs). The right compressor can apply 10 dB or more of gain reduction/leveling without overly squashing the track—with the best of them, the vocal won’t really sound compressed, just slightly fuller and thicker, like a more well-controlled performance, but with a completely natural character.

3. Don’t Take their Breath Away

I just mentioned breath sounds as one of the little noises often found in a vocal track. Other unwanted vocal artifacts, like lip smacks and headphone leakage, are often best Gated out (with a plug-in Expander/Gate or via editing), but breath sounds might be treated a little differently.

Of course, overly prominent breath noises—like long, loud inhales or those desperate gulps for air between phrases you sometimes encounter in vocal recordings of less-experienced singers—should be dealt with, especially when they’re brought out even more by compression. But normal breaths are a natural part of singing, and removing them entirely can make the performance seem breathless—a “singer who never breathes” can be subliminally distracting to the listener, and it’s often better to leave these in. The best approach is often to reduce (normal) breath sounds in level, but not entirely eliminate them. Rather than use an all-or-nothing Noise Gate setting, a more full-featured Expander, set for a less drastic degree of gain reduction, will usually do the trick, preserving enough breath noise for a natural-sounding vocal performance, but without overly distracting breath artifacts.

Audio Example 1: Breath sounds in a vocal track reduced in level, but not completely removed:

4. Don’t Push the Vocals to the Back

Standard techniques for enhancing a vocal track include doubling and reverb, but too much of a good thing can have an unwanted side effect. Doubling adds a nice thickness to a vocal, lending it a little chorus-like warmth and richness, and even smoothing over slight performance imperfections. And, of course, Reverb envelops the voice in a rich ambience, placing it in a three-dimensional virtual space that adds the sheen and depth that we’re used to hearing on singing voices. But that pleasing warmth and sense of depth can also have the side effect of making the vocal recede from front and center, inadvertently pushing it too far to the back of the virtual soundstage created by the mix. Now, this is probably appropriate for background/harmony vocal parts, but the lead vocal should usually sound like it’s at the front of the virtual stage—if it seems like the vocalist is back behind the drums and backline, then you may have a little cognitive dissonance, where the lead melody is subliminally placed in a less-prominent virtual position.

Of course, you’ll still want to apply doubling and reverb to lead vocals—it’s a matter of degree and the specific settings employed. Keeping the doubled part a couple dB lower in level than the original vocal track can still supply some beneficial thickening, but the slightly lower level may keep it from adding too much virtual depth to the vocalist’s apparent front-back position. With reverb, dialing up a slightly longer Pre-Delay (a reverb parameter that adds a slight delay before the reverb kicks in) may let you crank up the reverb a bit more while keeping it just behind the vocal itself, to preserve the front-and-center impression, even as stronger reverb follows the voice after a few extra milliseconds. 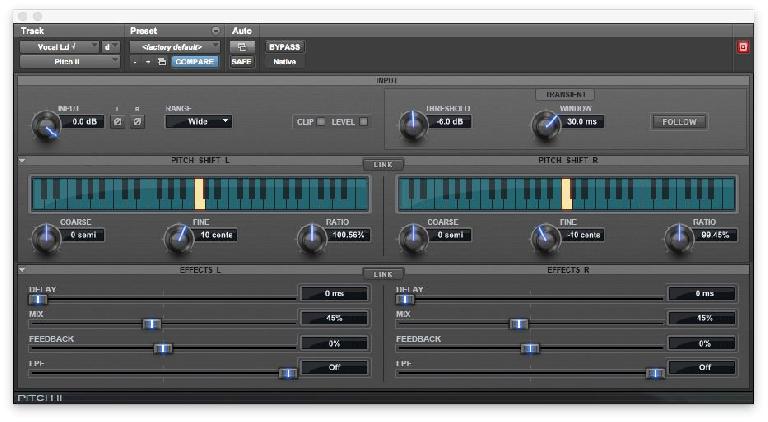 Since vocal tracks (at least individual singers’ performances) are almost always mono recordings, it can be easy (especially for mixing novices) to just pan all the vocal parts dead center and move on. And, in fact, this is where the lead vocal should be panned, but that doesn’t mean that the vocals have to stick only to the center of the sound field. Even while a lead vocal is prominently placed front and center, doubled versions can be panned slightly (or even widely) to one or both sides, creating a pleasantly wide effect. One common technique for widening involves adding two pitch-shifted versions of a lead vocal track—one copy is shifted up by a few (~10) cents, and the other down by the same amount, then both are panned, left and right, respectively. They’re mixed in lightly behind the original (panned dead center), and the result is a very subtle sense of width (along with the subtle warmth and chorusing/phasing from the pitch shifting itself).

To accentuate this extra width, the copies can be mixed in a bit stronger, panned wider, and/or delayed by a few (~10–20) milliseconds. Background/harmony vocal parts can be panned around the centered lead vocal, and they can also be doubled/widened further, as above. This subtle widening can be especially effective in sparser arrangements, where it can help fill out the virtual sound field.

Audio Example 2: Lead and backing vocals, first in mono, then widened with micro-pitch-shifting and stereo doubling:

Every (Vocal) in its Place

Often, the mistakes people tend to make when mixing vocals are just matters of degree—adding too much of a good thing—or just following the simplest path, without taking the extra time and effort to explore subtle enhancements. But a little more experience—helped along by a lot of listening—can develop a more sophisticated ear for the subtle mixing moves that can make vocal(s) sit “just right” in any mix.