5 Mistakes To Avoid For Stereo Image Processing When Mixing

Playing with the stereo field of your sounds can be a creative mixing technique. But as Joe Albano explains, there are some pitfalls you'll need to avoid.

When we’re mixing it’s easy to focus so much on level, EQ, compression, reverb, and delay fx that we forget that another key element of the mix is imaging. Over and above basic amplitude panning, there are a variety of additional techniques for manipulating and enhancing the stereo image of various tracks in an arrangement. Some are good for subtle stereo enhancement, while others may lean more to special effects. But some stereo imaging processing comes with caveats, regarding both creative applications and technical considerations, particularly mono compatibility. Here are five things to watch out for when utilizing stereo image processing.

One of the first tricks many musicians and producers learn regarding image manipulation is the “phase flip” trick, for creating a wide stereo image out of a mono source. They discover that by duplicating a mono signal and simply reversing the phase of the copy, then mixing it back in with the original with the two signals panned hard left and right, you can easily create a wide, diffuse image from a pinpoint mono signal. However, the best advice I can offer on this technique is Don’t Do It! - I’ll explain why.

First of all, though the term “phase flip” or “phase reversal” is commonly used - and the button on many consoles and mic pres that does this is often labelled “Phase” - technically what’s being done is really a polarity reversal: simply reversing the hot and neutral sides in the (AC) electrical signal. This control is there mainly to compensate for mics or other signals that may have their polarity reversed, relative to other signals - it’s intended to correct that scenario, putting the affected channel back into correct polarity.

When you employ this technique as I described above to create a stereo effect from a mono signal, what’s happening is that as one speaker is moving forward, the other is moving backward, instead of both speakers moving together, as they would in mono. The problem is that this nice, diffuse wide stereo effect will only be heard when the signal is monitored in stereo. In that case, the speakers are free to move in equal but opposite directions, but if the audio is played back in mono, the equal but opposite signals will completely cancel out, not only eliminating the effect, but completely canceling out the signal itself! 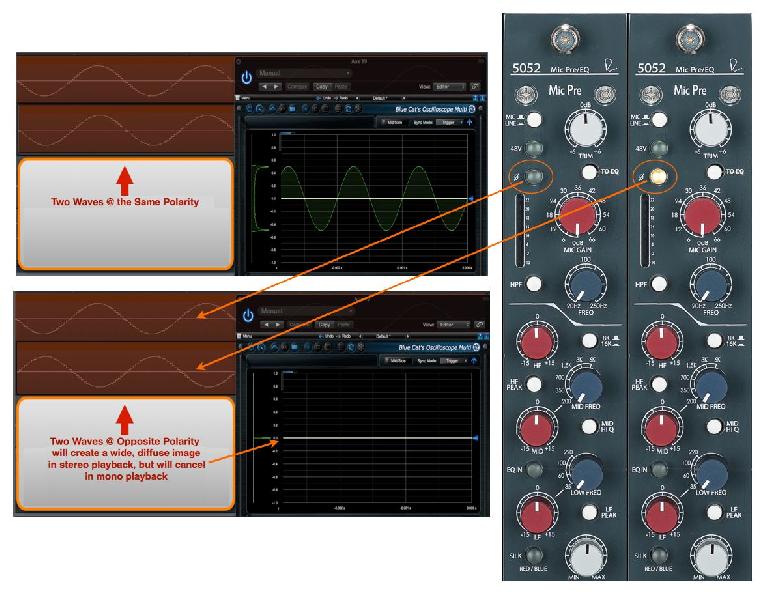 You may get away with this approach in a live scenario, where you know the two signals (original and polarity-reversed) will be sent to two separate, spaced-out speakers, but in normal mixing situations it should be avoided - there are other techniques for stereo enhancement, some of which do involve more subtle phase or time delay.

So how can a mixer take a mono signal and give it a little extra width? Panning can position a mono track anywhere in the stereo sound field, but what if you want to, say, fill up the stereo space in a sparse arrangement perhaps? Well, duplicating a mono signal, delaying the copy by around 15-20 milliseconds, and then panning the two signals hard left and right will create a nice wide doubling effect - the sound of two widely-spaced players/singers performing the same part in unison. This is a pretty standard doubling, or ADT, technique, and many mixers employ it routinely.

But what if you want a more subtle widening of a track, just to fill up a little extra space without an obvious wide-panned doubling effect? A good example might be a centered vocal part that might benefit from a little extra width, for fullness and depth. Well, delay can again be employed, maybe more subtly and without the wide panning, but another popular technique involves micro-pitch shifts.

The signal is again duplicated and panned left and right; then one side is very slightly pitch-shifted up - by maybe around 5-10 cents or so - and the other pitch-shifted down by the same amount. This will create a subtly wider image without an obvious doubling effect, possibly adding a pleasant sense of depth and, with larger shifts, slight chorusing at the same time. If you wanted to preserve a solidly-anchored center image while still widening, then the signal should be duplicated twice - the original stays panned center, the two copies are micro-pitch-shifted as above, and panned left and right, and mixed in lightly with the dry original.

You can do this with any pitch shifter, but there are numerous plug-ins that specialize in this technique - a good example would be Soundtoys’ MicroShift plug-in.

MicroShift not only offers a quick and easy implementation of this micro-pitch shift technique but also emulates the vintage character of an older hardware unit, the Eventide H3000, that offered a very characterful version of the effect.

Auto-panning is a cool effect - getting a repetitive echo or a bubbling sequencer line bouncing around between the speakers can provide a bit of added motion that may lend a little more excitement, or at least a little extra liveliness, to a track. There are many fine auto-panning plug-ins around - a good example is another Soundtoys effect, PanMan. This plug-in offers a lot of flexibility for setting up interesting motion between speakers - you can dial up anything from smooth auto-panning to quick jumping between left & right, running free or sync’d to tempo. 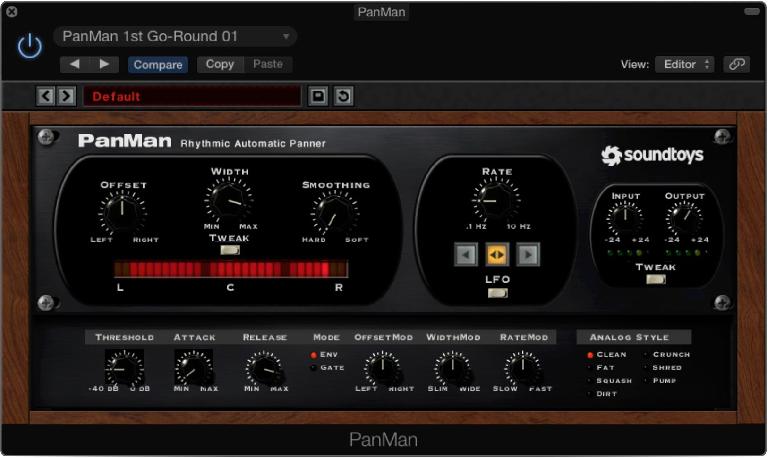 A nice implementation of auto-panning might go something like this. You have a track with a sequenced rhythm part (maybe a synth), bubbling along with a basic drum and bass accompaniment. At a certain point, you want the track to add a little musical “push”, but you’re not ready to bring in additional instruments just yet, or pump up the rhythm section - you’re saving those gestures for a little later in the tune. At the desired point, an auto-panning effect could kick in - suddenly a simple chugging rhythm takes on some wide stereo motion, giving the track a subtle yet distinctive musical “push”, prior to other, more dramatic gestures to come.

The caveat this time is to remember that if/when this song is played back in mono, while the stereoized auto-panned part will sound the same, the effect will disappear; in fact, if you’re simply listening without being in-between the speakers, you’ll likely not perceive the effect at all, and in the above example, the subtle musical push it was intended to provide would be lost. So auto-panning can add a nice extra something to a mix, but you’ll want to be careful not to construct the mix to depend on it too much for necessary musical gestures.

While some of the techniques I’ve mentioned so far involve generating a stereo sound field from a mono source, MS, or Mid-Side stereo offers a way to enhance the stereo width of a stereo signal. A quick reminder: MS stereo divides the two channels into a Mid signal (mono, L+R) and a Side signal (L-R). The Side signal is mainly ambience and wide-panned elements in a stereo signal. MS is both a mic technique and a processing approach - in fact it’s the way stereo is encoded in the groove of a vinyl record, primarily because it provides 100% mono compatibility. 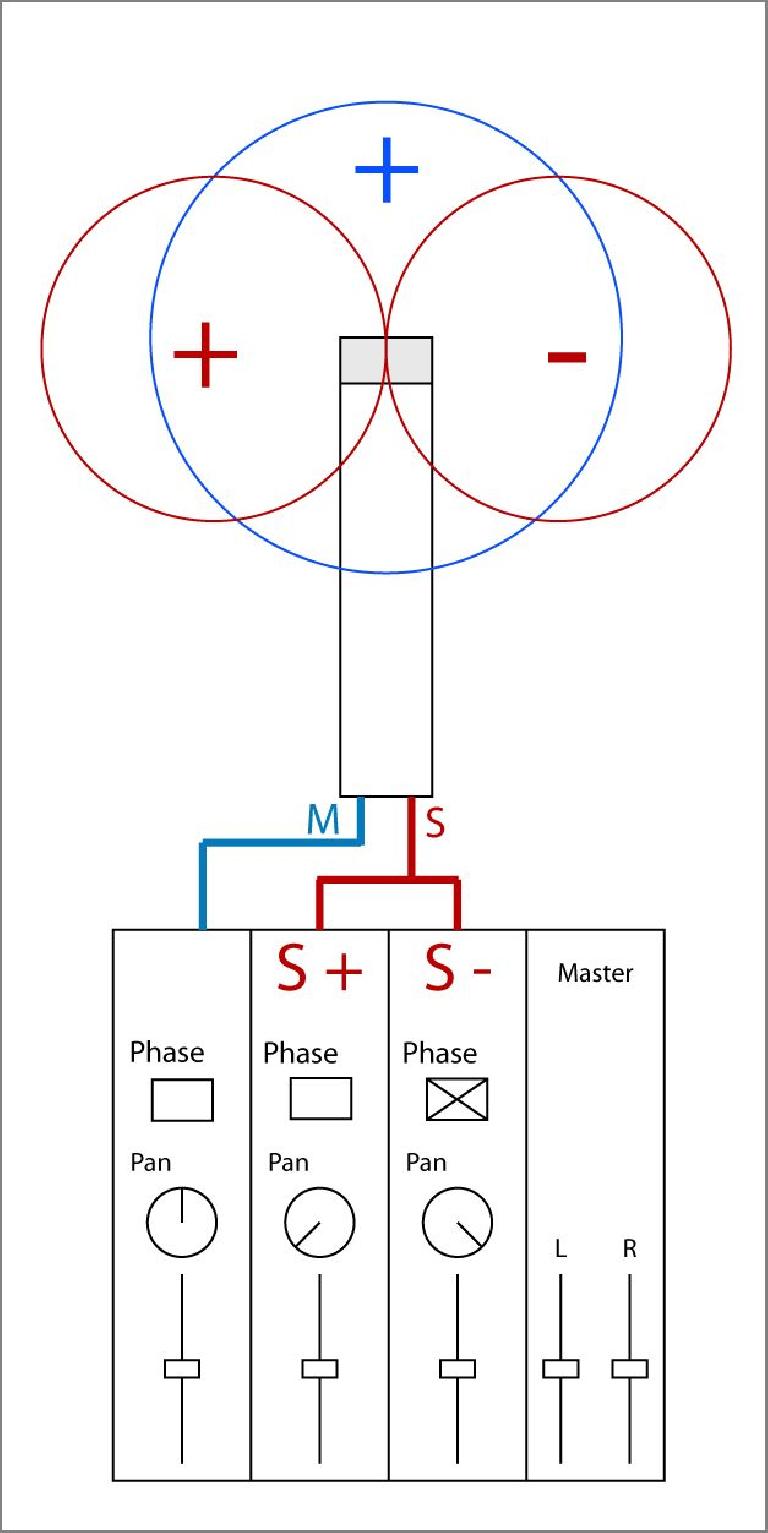 Often, regular stereo signals are converted to MS for mixing or mastering, because it allows independent processing of the Mid and Sides. And this is where it can be pressed into service for subtle image manipulation - specifically, subtly narrowing or widening the stereo image. If the Side signal is increased in level (above the mono Mid signal), the stereo Side component will be emphasized, increasing the width of the overall stereo signal (again, while maintaining full mono compatibility). With a mix, for example, the Side is where the ambience/reverb is, so cranking it will not only widen the signal slightly, but also add a bit of wetness (reverb) and depth, possibly pushing elements like the drums and bass a little to the rear, and bringing forward wide-panned stereo guitars & synths.

If you’re dialing up a somewhat stronger effect, that’s where you might want to check mono compatibility. The whole idea of MS is that it’s fully mono compatible, but the reason for that is that the Sides cancel out in mono playback, leaving just the pure mono Mid signal - this is because the Side signal is created by employing a polarity-reversal. If all you’re doing with the M-S balance is adding a little width, then you won’t care if the Sides cancel in mono, but if you’ve pushed the Sides a bit more and are enjoying some extra depth and ambience, you should realize that that aspect of the effect will disappear in mono - again, not necessarily a dealbreaker, just something to keep in mind.

Getting back to ways of generating a stereo soundfield from a mono signal, there’s another technique that can sometimes work well for that, besides the use of delays and micro-pitch shifts. That technique is frequency-splitting - it doesn’t change the character of the sound, and it’s mono-compatible to boot. 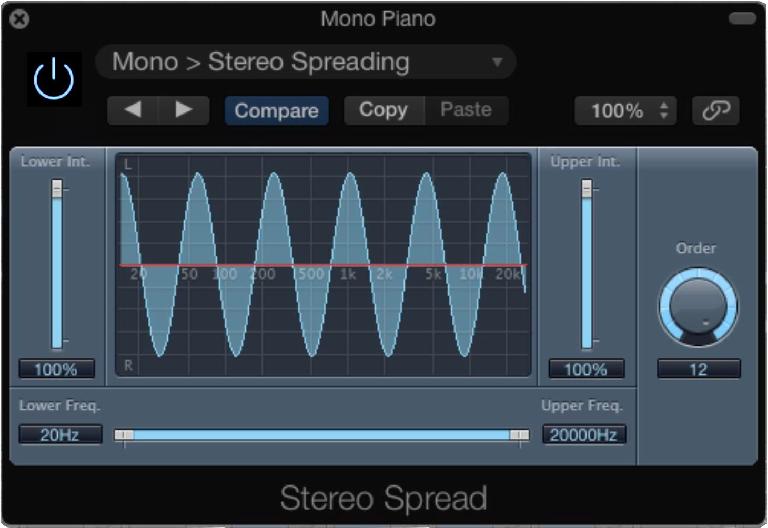 In stereo, the tone of the signal should be mostly unchanged, though in practice, thanks to speaker/room interaction, there may be slight tonal variations when the effect is applied. In mono playback, the two sides combine, and the boosts and cuts cancel out leaving the original flat EQ. The only possible weirdness a listener might perceive could occur if he/she was seated very close to one speaker - without hearing enough of the complementary EQ from the other side, the tone of that track might be a little off.

A good example of this approach is Logic’s built-in Stereo Spreader plug-in. It offers a little user control to fine-tune the effect and works pretty well, especially on things like mono string pads and the like.

So those are a few suggestion of things to keep in mind when playing around with the stereo image in your mix. All of these techniques (with the possible exception of the phase flip) can be useful, as long as you’re careful to insure reasonable compatibility in all listening situations.

Learn more about mixing in the Ask Audio Academy here.