5 Interesting Features that Make Reason an Excellent DAW to Use

Reason is a well-established DAW that continues to mature while never losing anything that users love about it. Here are 5 reasons it should be in your sonic arsenal.

No DAW is perfect but one particular DAW has held my fascination for a long time. And the funny thing is, it wasn’t always considered a DAW. In this article, I’d like to point out five unique features that make Reason not only an excellent DAW to use but also to grow with!

I think when many people get their first DAW there is often the underlying expectation to not only be able to record your own music but also a platform that you can actually learn something about music production itself. Out of every DAW I’ve worked with, Reason has probably taught me the most. Because its graphical representation so closely resembles real hardware, and the way that it all connects, I have been able to apply what I’ve known about hardware to Reason’s software.

And I can also apply what I’ve learned about Reason’s own instruments and effects, which closely work like and resemble their hardware counterparts, to hardware devices I’ve picked up over the years in terms of signal flow and usage. It is the only DAW that I know of that will let you selectively route cables through a specific path be they either audio cables, or CV connections where you’re controlling parameters of other synths. Logic Pro comes close but you have to deal with the Environment, which is nowhere near as fun, in my opinion. 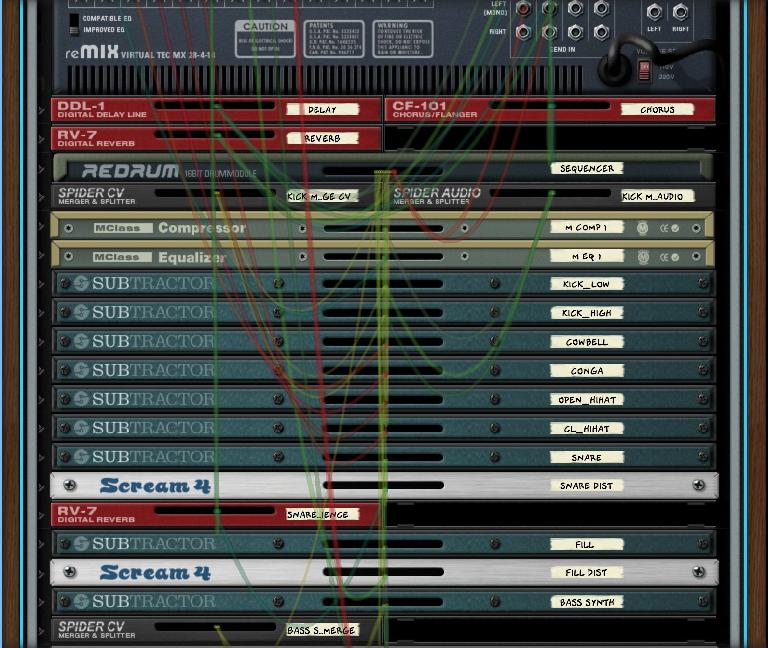 Years ago, the Propellerheads themselves made cardboard cutouts of their instruments and effects just to demonstrate what kind of space all their gear would take up in a rack. The funny thing is, the instruments that were printed as cardboard over 10 years ago are still in Reason. Their functionality is still the same and they still take up a ton of room within a mix, even though they’ve never been represented in hardware. Once you learn one of their devices, you know it, and it never changes. And once you know how to wire it in creative ways, through the virtual cables, you can create things that are way deeper than you might imagine. 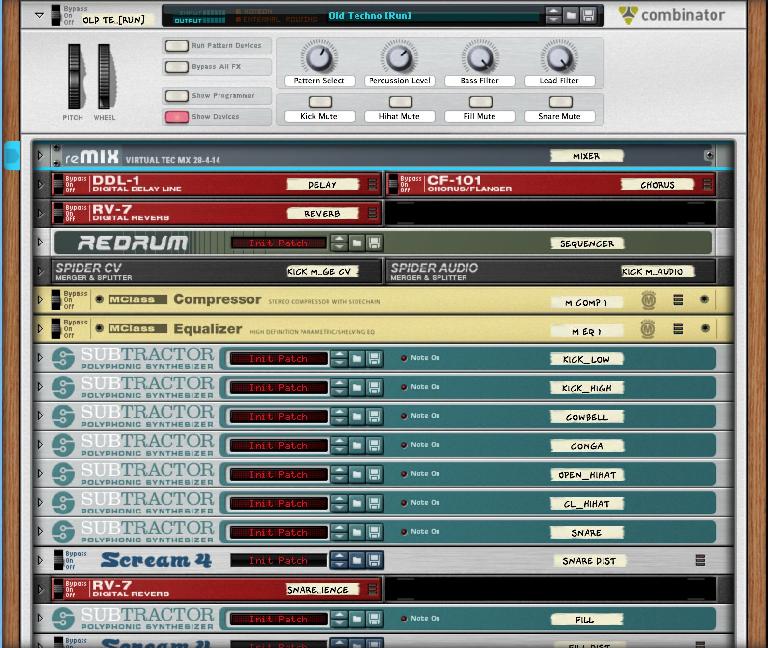 While other DAWs may now have a way to combine instruments and effects in the form of racks and so on, Reason was the first to offer the Combinator, a device that allowed multiple effects, instruments and just a straight up rack within a rack to be available inside one instrument or multi-effect device. Ableton and Logic have both come up with solutions that come close but personally, I still use the Combinator for live performance. I like the way that you can set up your MIDI controller to scroll through to different Combinator patches without touching a mouse, using Remote Overrides. I also like being able to use actual devices I used within one of my songs on a recording, live, and wired in the exact same manner, through the effects that make the patch sound like it’s supposed to.

The internal sound library of Reason is a collection of samples and patches that I have come to rely on greatly over the years. If I need a Mellotron, I know where to look, if I need an 808 kick, I know where to look. Propellerheads have been grooming the Factory Soundbank of Reason from day one, and it’s never changed, it’s just grown! Why this is so impressive to me is that I know that no matter how may versions of Reason go by, all the old songs that I’ve created in Reason, years ago, will still load up with all of the appropriate samples, patches, and even the instruments used will still behave the same. Now, with the inclusion of VST instruments in recent years, you will need to ensure that you stay up to date on those old plug-ins. However, you can always bounce! 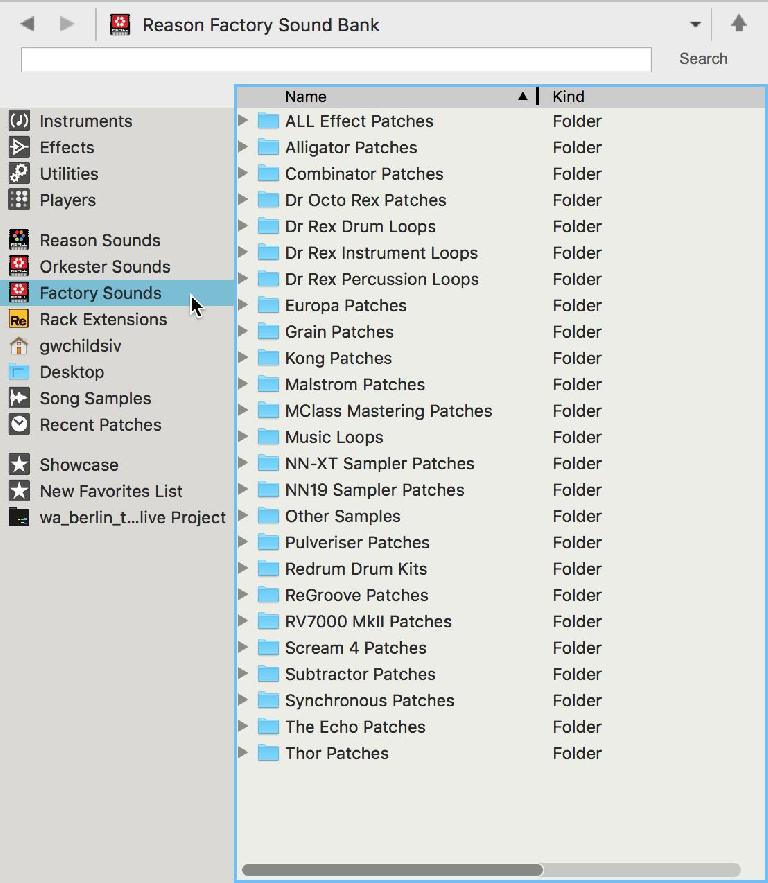 I’d also like to mention that the factory sound bank is full of great ‘bread and butter’ type patches, which aren’t always as readily available in some DAWs. There are not only great drums, but great pianos, guitars, basses and many of the central elements in classic rock and roll, while also being broad enough to cover Trap music, Glitch and many of the more electronic genres. Colleagues of mine are constantly amazed when I point them to some of the patches that are just laying in wait within the Reason factory sound bank.

Reason does support third-party VST plug-ins and even though they are third-party, they can be routed through crazy splitters, Combinators and effects in ways that other DAWs just don’t allow. Some VSTs even have additional CV and audio outputs on the back, like all the other devices in Reason, when you press the Tab button. This opens up a world of sound design madness in realtime and I really do feel like if Propellerheads continue to support Reason as wonderfully as they have over the years, it’s only going to get wilder.

The CV router and Automation from the very powerful Reason sequencer will let you control parameters within your VSTs like the native devices in Reason and you can also bring in other sound design platforms like Native Instruments’ Reaktor, and build instruments to run alongside of the Reason devices. It’s like having a world with many doorways to other worlds within! 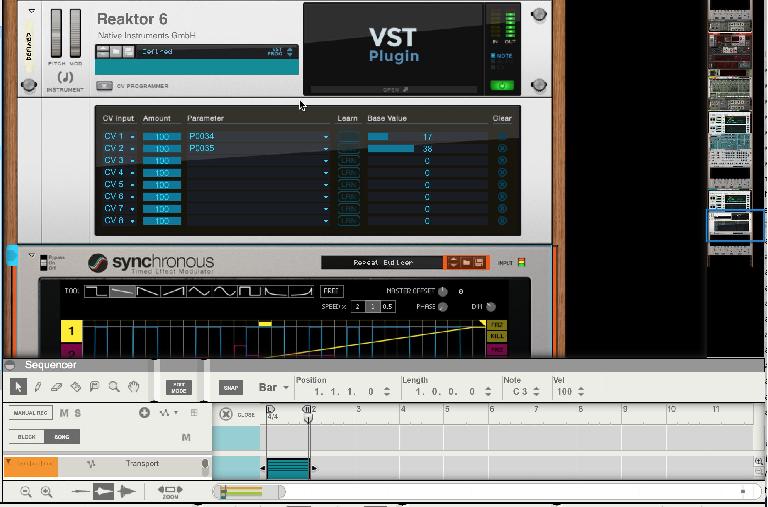 The Reason sequencer has several things going for it that should not be underestimated. First, the audio recording in Reason, as well as the time-stretching is the best I’ve heard. Ableton’s Complex Pro algorithm comes really close but Reason’s still sounds better to my ears. Secondly, it’s a great sequencer to cut your teeth on, if you are new. It works very similarly to the sequencers found in many other DAWs in that it runs as a linear sequencer but it also offers pattern-based sequencing (through Blocks). There’s also ingenious Dub and Alt tracks where you can stack and try variations on a take with ease. There’s even Groove sequencing that allows you to bring soul in to any drum beat. Plus, because the sequencer (and Reason in general) hasn’t really changed, but evolved over the years, a giant treasure trove of tutorials are available that still apply, despite the version they were created for.

Reason hasn’t just been an app, program, or DAW to me over the years; it’s also been a friend and an irreplaceable bandmate and a community. When I am looking for something in sound, it always has an answer, and it’s continually growing. I’d like to end this read with a big thank you to the Propellerheads, and thank you as well, for taking the time to hear about my love for Reason.

Dustin Miraglia
I wholeheartedly agree! I use many DAW's and have a variety of workflows depending on what I am creating (presets, songs, tutorials) but when I am stuck at any point, Reason is always waiting to give me direction. Was the first "DAW" I ever used in 2005 and although, at the time, I needed things Reason was not designed for, recently, everything I would ever need to do can be done in Reason. And it's futures looking bright! Actually in the process of creating my first Rack Extention and even that system I can say has been designed well. The Props are at the top of the game!
tladb
Blocks is an under appreciated feature of Reason. Blocks make it easy to structure your song into sections, create alternative versions and easily move the Blocks around the composition.

For example you can so a top down approach which lays out the into, build up, main, breakdowns section and then work on the blocks separately moving the about as the composition develops.

Alternatively you could create out Block with all the elements to hear the sound and then cut those to separate Blocks for different sections.
Matt Mann
Hi GW!

Thanks for the excellent article. I, too, have been using Reason for a long time (v1.5). Although I use another DAW for final mixing and mastering, Reason is my go-to for all things music productions. And now at version 10, it has more than ever to help me do what I do.

I do have one question, though. I've never even thought about taking Reason out live, but I'm now considering it. I've always used hardware synths and played with full bands (except in my first duo...but we used a hardware sequencer and synths).

The one thing I don't get is how you would load songs quickly during a live set. Most of what I do live is based around either electronic music.....or 80's covers. I'd still like to do both. My point is: I'd like to run sequences live and setup a couple of controllers to control things in Reason, but I'm not sure about load times between songs....or if there's a better way.

Thank you much from a very "old school" keyboard player and another former military man.