The recording process can throw all kinds of curve balls at you, however well prepared you may be. Joe Albano shares some industry secrets that can save your bacon if the worst happens.
Prev 2/5 Next
1Mirror Trick 2Pencils & pantyhose 3Speaker -> Mic 4Phase Flip 5DIY iso

This is a well-known, but very useful trick that can be used even before production begins, to help set up the studio for optimal sound. One typical problem in any music room is an over-abundance of mid and high-frequency reflections from the walls - these delayed reflections will combine with the direct sound from the speakers, causing comb-filtering, which will cloud the sound, possibly leading to dubious processing decisions and poor mixes.

The solution is to add absorptive material - usually those foam wedges you see in many studios - that will absorb enough of the problematic reflections to mitigate the problems they may cause. But too much absorption will lead to an overly dry, dead room, unsuitable in a different way, so the trick is to apply just right amount of foam, in just the optimal places on the walls, to get the job done while still leaving an appropriate degree of overall ambience.

But how can you determine the best locations for absorptive panels? Professional studio contractors employ very pricey test mics and measurement gear, but there’s also a no-cost approach that can be effective - the “Mirror Trick”. The most problematic reflections are the earliest - the first and strongest ones - to arrive at the listening position (the “sweet spot”), so the absorptive materials should be placed at those spots on the walls. Since sound waves reflect just like light waves, you can locate these spots by sitting in the sweet spot and having someone hold a mirror against the wall.

The mirror is moved slowly around the room, until the speakers can be seen by the person in the sweet spot - that’s the source of a primary reflection, and that’s where absorptive material should be placed. You simply repeat this for all the surfaces nearest to the listening position, applying foam panels in those spots, and when you’re done, you’ll likely have tamed the worst of the short strong reflections, while leaving the longer weaker ones (from surfaces in the rear of the room) to supply the needed ambience. All thanks to a simple mirror.

Everyone has seen those pop filters that are used in vocal sessions, to prevent plosives, or p-pops - those annoying thumps that often happen on the letters “p” and “b”. But what if you don’t have one handy, and you’re confronted with a singer-vocalist who shakes the mic regularly with every p & b? Well, in the old days, makeshift pop filters were made by cutting up a pair of pantyhose (or nylons) and attaching them to a wire hanger, forming a DIY filter. It doesn’t look very professional, but it does get the job done. There’s an even simpler technique that might be worth a try - a pencil. You attach a regular lead pencil (remember those?) vertically to the mic with a rubber band.

The idea is that the pencil breaks up the wavefront - the blast of air from the vocalists’s mouth that shakes the mic’s diaphragm - just enough to mitigate the popping problem. This may or may not work with some vocalists, but, like the pantyhose solution, it’s worth a try if the alternative is to live with the pops and (tediously!) edit them out later.

A microphone and a speaker are basically the same thing in reverse - a flexible diaphragm vibrates, and audio is converted between sound pressure and voltage. The speaker vibrates to convert the audio voltage to sound waves in the air, and the mic’s diaphragm vibrates in response to incoming sound waves, converting them to audio voltages. The speaker is a lot bigger than the mic’s diaphragm of course, but the underlying principle - electro-magnetic induction - is the same for both.

There’s a drum-miking technique that became popular a while ago, and remains popular still, that utilizes a speaker wired in reverse for use as a microphone, specifically for the kick drum. 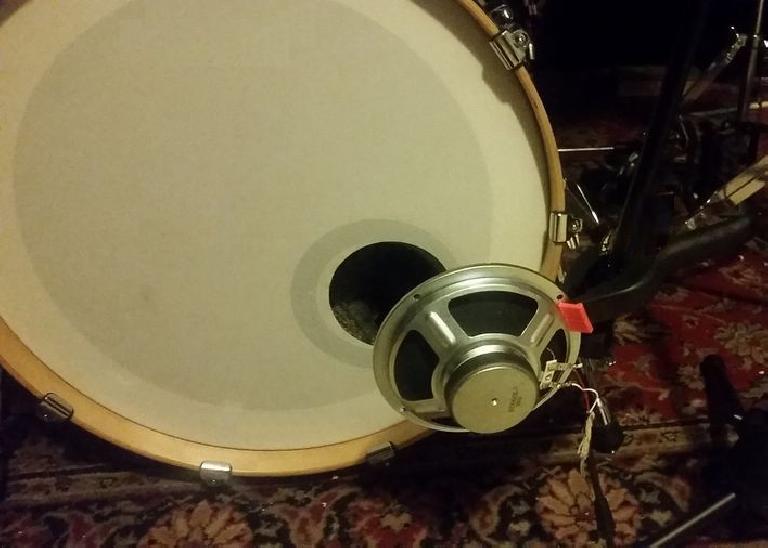 Why do this? Well, the idea is that the speaker’s larger vibrating surface will pick up some of the very deep and subsonic low-frequency energy that a typical kick drum mic may miss out on. It’s subtle, but mixed in with the regular kick drum mic, it could provide that extra level of power and thump that may be perfect for your musical needs.

This trick is a little more iffy, but many people swear it can work wonders if set up just right. You may have come across photos of a singer in concert singing into two mics taped together; sometimes the second mic is for a recording rig, but there’s another reason it might be there - to address leakage. The theory is that by using polarity reversal on the second mic, you may be able to cancel out leakage, better isolating the vocal. 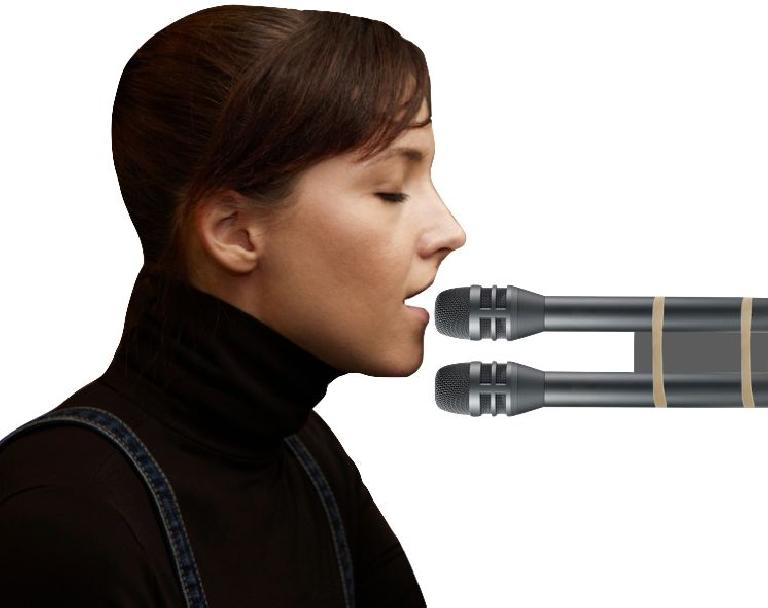 Ideally, you’d use two identical omnidirectional mics for the best results. Of course, if you simply tape them together side-by-side and flip the polarity of one, you’ll cancel everything, including the vocal. To make it work as intended you need to position one mic just a little further from the singer’s lips than the other - a couple (two or three?) inches or so. Since the source of any leakage is from a greater distance, this offset will be negligible, and when the polarity is flipped the bleed should cancel, to some degree. But if the main mic is very close (i.e. right up against the singer’s lips) then that offset - and the resulting delay - will be enough to avoid cancellation of the voice, and the vocal should come through (mostly) intact.

At least that’s the idea. In all honesty, I’ve never tried this, but the technique has been used professionally (see the Grateful Dead), so apparently at least some people have gotten results with it. Of course, this is a hack for live scenarios and not studio use - any time you’re playing with the phase/polarity of the primary signal, there’s a good chance that comb-filtering effects will cloud the audio to some degree, which may be fine for live, but wouldn’t do for studio recordings.

Plus, you apparently need to have the singer right on top of the mic for it to work to a reasonable degree, and again, while fine for live sound, this is also not conducive to achieving the level of vocal clarity expected for studio recordings. Still, if you’re doing a live recording, or just struggling with a soft-voiced singer in front of a loud band, it might be worth a try if you have the mics, and the time to set it up and fiddle with the distance offset until it works ok and the vocal still sounds at least decent. Again, it seems to work for some people, but, as they say, Your Mileage May Vary..

Recoding vocals (or other acoustic sources) in a smaller studio can be a challenge - the sounds of the outside world tend to creep into recordings (always at the most inopportune moments), ruining good takes and/or generating a lot of editing or audio repair after the fact. The best solution is to utilize one of those small iso-booths, which will effectively keep unwanted sound - both from the outside world and from within the studio itself - out of the mic, making for clean, professional recordings. Naturally, not everyone can avail themselves of this solution, for lack of space or funds. Fortunately there are a few makeshift hacks you can turn to to isolate audio sources when noise rears its head.

To keep noise out of a vocal recording, one classic approach is to surround the vocalist and mic with sound absorbing material. This is the equivalent of using studio gobos (go-betweens) - prebuilt movable panels employed for isolation, which come in both large and small sizes. If you can’t afford the commercial ones (medium $$), or don’t have the skills and/or space to build/store your own, temporary gobos can be constructed from suitable found materials. The most common candidates would be a couple of mattresses, propped up around the vocalist/mic, or between the mic and any sources of unwanted leakage (i.e. a poorly sealed door or window). Even better might be one of those heavy-duty packing blankets hung from a wire, since that could be folded and packed away easily when not needed. Of course, as with the pantyhose solution above, it won’t look very “professional”, but if it gets the job done, it’s still better than not addressing the problem at all, or cancelling/postponing the session (also not very professional).

On the other side of coin, you may be facing a scenario where you - or the musician - are the one generating the “noise” - at least it may be noise to your neighbors and the police, when they decide they’ve had enough. A typical example would be a loud (maybe vintage) guitar amp that needs to be cranked to achieve its best tone, but lacks a master volume control. Unless you have a dummy load handy, you may need to isolate the amp to be able to work with it - here, again, one of those commercial iso-booths, or even one of those small iso-cabinets (just big enough to seal in a loud guitar amp) would be ideal, but you can rig up your own DIY iso solutions as well.

The simplest thing to try may be a closet, especially one that’s full of lots of sound-absorbing stuff (like clothes and blankets). Just run a mic and guitar cable into the closet, close it up tight, and give it a try. You might be able to enhance the effectiveness of this by utilizing the same room-in-a-room technique of the iso-booths - construct a makeshift iso-cabinet out of a large-enough box (or two or three, nested), with sound-absorbing material (again, clothes, blankets, leftover packing material) to help contain the sound. Stuff that whole contraption in the (already well-stuffed) closet and let ‘er rip. It may work, it may not, but it’s at least worth a try.

The audio industry is chock full of slick, professional tools and devices for problem-solving, but thanks to Murphy’s Law, the thing you need at any given moment is likely to be the one thing you just don’t have. But a little ingenuity and a healthy DIY attitude - plus a willingness to sacrifice a “professional” appearance for an effective homemade treatment - can often provide the solution to any number of problems that may crop up in the exciting world of music/audio production. As I said up top, the suggestions offered here may or may not work in every situation, but they - and any other ideas you may come up with - are certainly worth trying.