Language
We all know the usual suspects for music making on iPad: GarageBand, Auria, etc. If you're looking for apps that bring something new to the table, Toby Pitman shares 5 of the coolest.

Alexander Zolotov's Virtual ANS is an iOS version of the ANS photoelectronic instrument created by Russian engineer Evgeny Murzin in the late '50s. This strange mechanical instrument allowed you to draw sound and is truly unique and totally mad!

Now if this all seems a bit familiar then you'd be right. Edward Spiegel used the principles of the ANS to create MetaSynth. In fact the similarities between Virtual ANS and MetaSynth are quite uncanny but then again they come from the same place.Now Virtual ANS is nowhere near as deep and complex as Metasynth, but it does pack a punch with some great features. The basic idea is you set up a canvas (the higher the resolution in pixels the higher the resolution in sound) and draw on it with the provided tools a bit like Photoshop. When you hit play, the pixels are played back as sound (luminance relates to volume). The frequency or pitch depends on their position on the Y axis. You can also import and manipulate images and play them back as sound too.

Conversely, you can add an audio file and turn that into a sonogram (image) and manipulate the image to create weird effects. You can even record into it live and mangle the audio via the canvas. Confused? Great!

Virtual ANS is a sound designers dream and if you don't have $500 to spend on MetaSynth then this is the next best thing!

Sinevibes have seem to go under the radar with most people I know. They make awesome plug-ins for Mac and have been at it for years. If you don't own at least one of their AU's then you should (starting at $19).

Sequential is their first jump into apps for the iPad and it's a really cool, fun app indeed. It's  basically a scaled down version of their Sequential AU plugin. What you get are twelve effect lanes that can be sequenced on or off using a step sequencer. You can only use one at a time for each step. 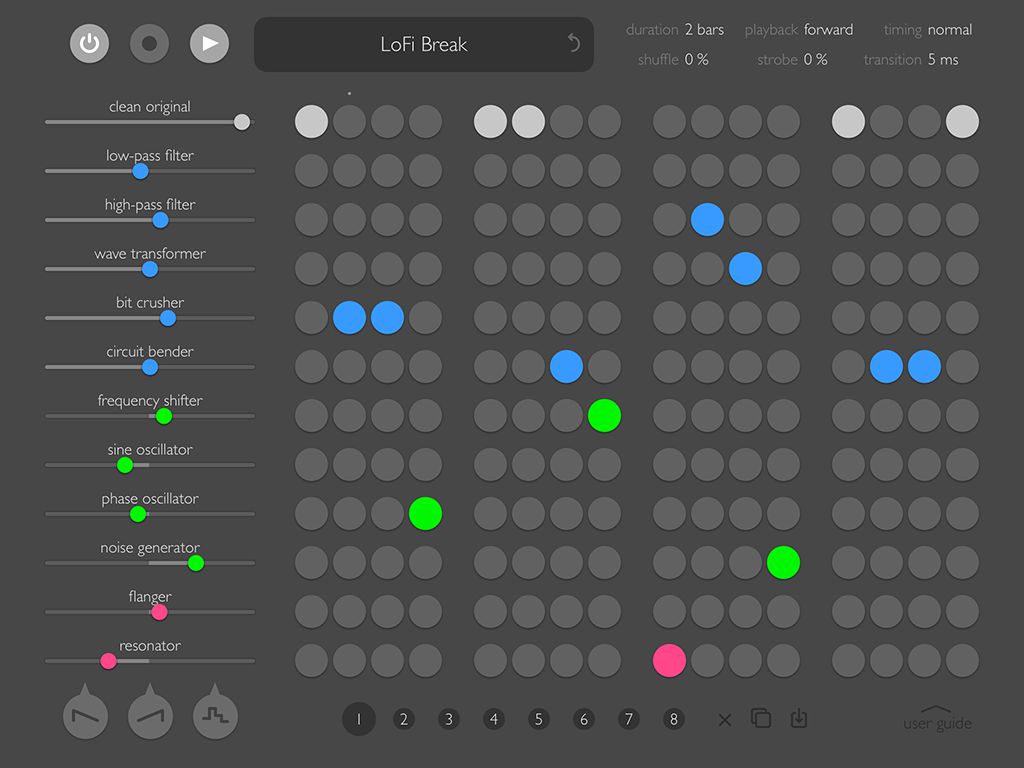 Just load in a loop from the library (or one of your own) and Sequential will work out the tempo for you. Each effect has one simple slider that changes the most obvious parameter of the effect (like cutoff for the filter). There are also three modulation shapes that modulate all effects when touched.

There are eight scenes, shuffle, strobe (gate time) and transition time (for the effects). Although you can't save presets, you can record straight to audio for your loops.

If you're looking for a fun way to mangle loops then Sequential is definitely an app you should check out.

TC-11 is a true multitouch synth. It's also incredibly complicated to get your head around! In fact your brain might run out your ears trying to figure it all out. When you have the ''Ah-ha” moment however you will find it to be an incredibly powerful and creative tool!

Basically TC-11 is kind of like a regular synth in the fact that you have Oscillators, Envelopes, Filters, LFO's and FX. It's how you trigger, modulate and control these functions that really sets it apart. 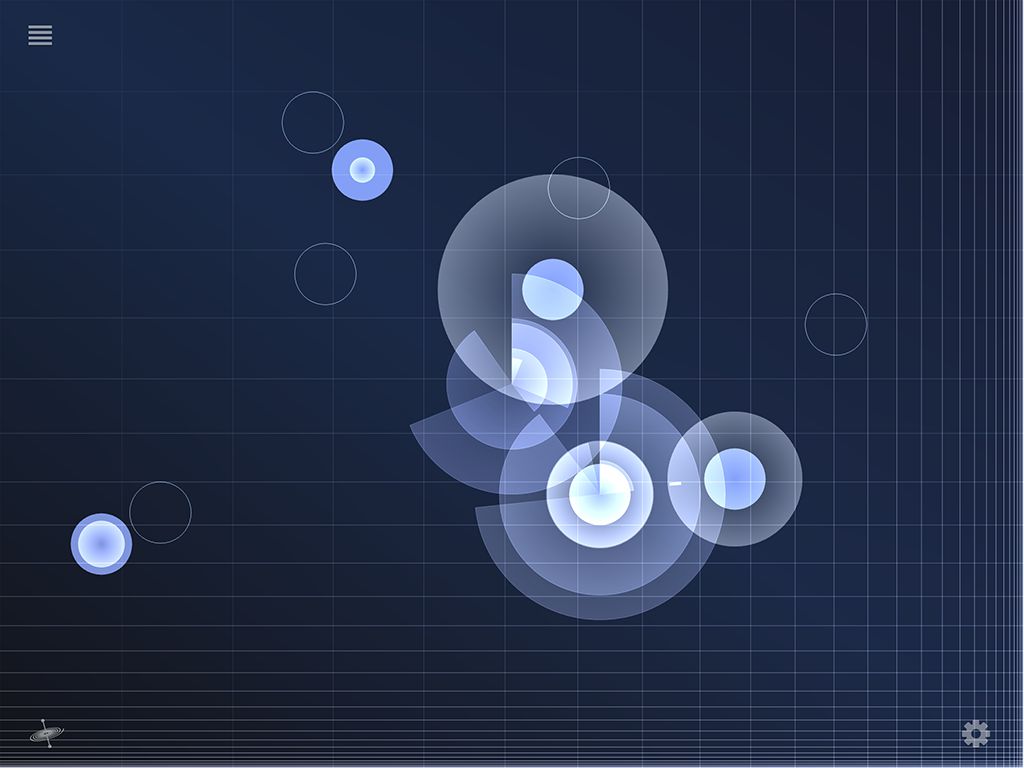 The front end is one big multitouch screen. Parameters can be controlled on the X,Y axis, by the accelerometer, compass or gyroscope. They can be controlled based on the distance of the latest touch to the previous one, the speed between touches or maybe the angle between two touches. It's mind boggling!!

Saying that it can produce anything from straight ahead synths and arpeggiations to the craziest sounds you've ever heard!! Get all your fingers on at once and smush them about!! Crazy!

It's not cheap but if your into sound design and tweaking then it's deep enough for even the most hardened programmer!

If you play guitar and own an iPad and you don't have Positive Grid's Bias amp modeling app then your seriously missing out! At the present time this is the be all and end all of amp simulation on the iPad.

Bias features 36 amp models categorized into genres from Clean, Blues, Crunch etc. You can customize virtually any aspect of each amp from the type of tubes and how they're biased, right down to the type of transformer in the power amp. There's Cabs and Mics and you can ever customize the look of your amp with graphics and all! It's also fully compatible with their popular JamUp XT and Pro XT apps. 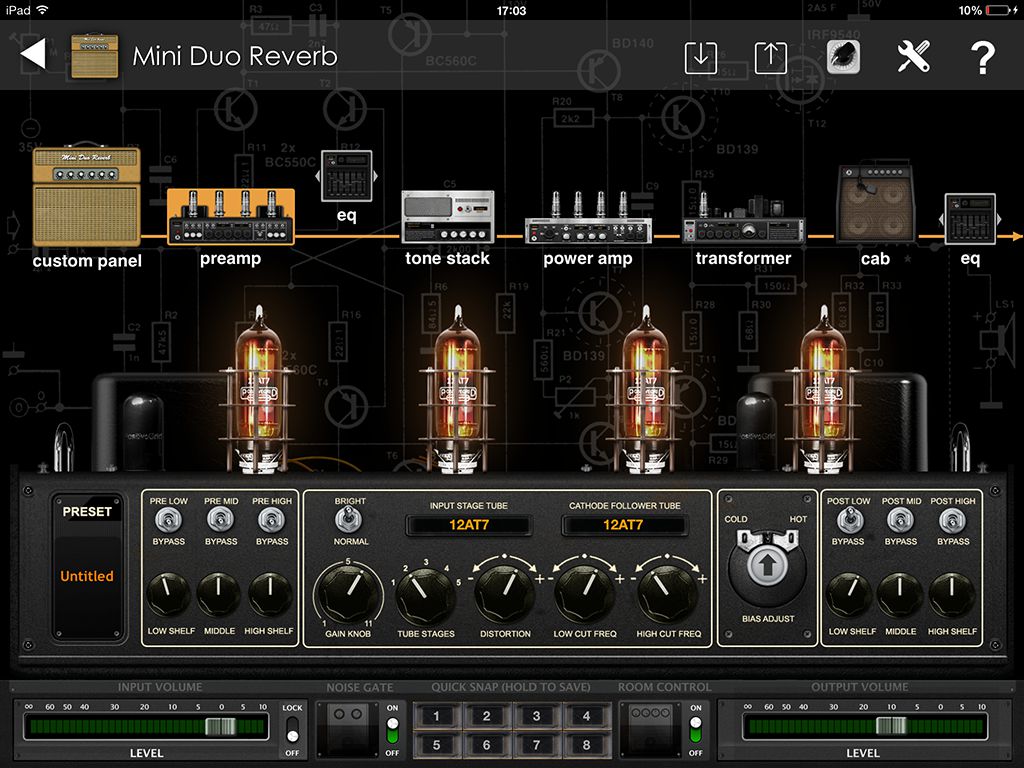 Bias has really been a hit with the guitar community and has it's own 'Cloud' user sharing feature built into the app with hundreds of presets.

This isn't a toy! Bias is as good if not better than any VST or AU plug-in modeler on the market. Buy it now!!

Probably my favorite app for granular synthesis tricks. Just load in an audio (syncs great with Dropbox!) and scrub the file in the interface. There's plenty of parameters to tweak from Grain Size, Length and Jitter to audio FX. The output you get relies greatly on what you feed it so the possibilities are endless.

You'll find the interface is intuitive and easy to use and it also plays well with MIDI so hooking it up to a hardware controller can really bring to to life. 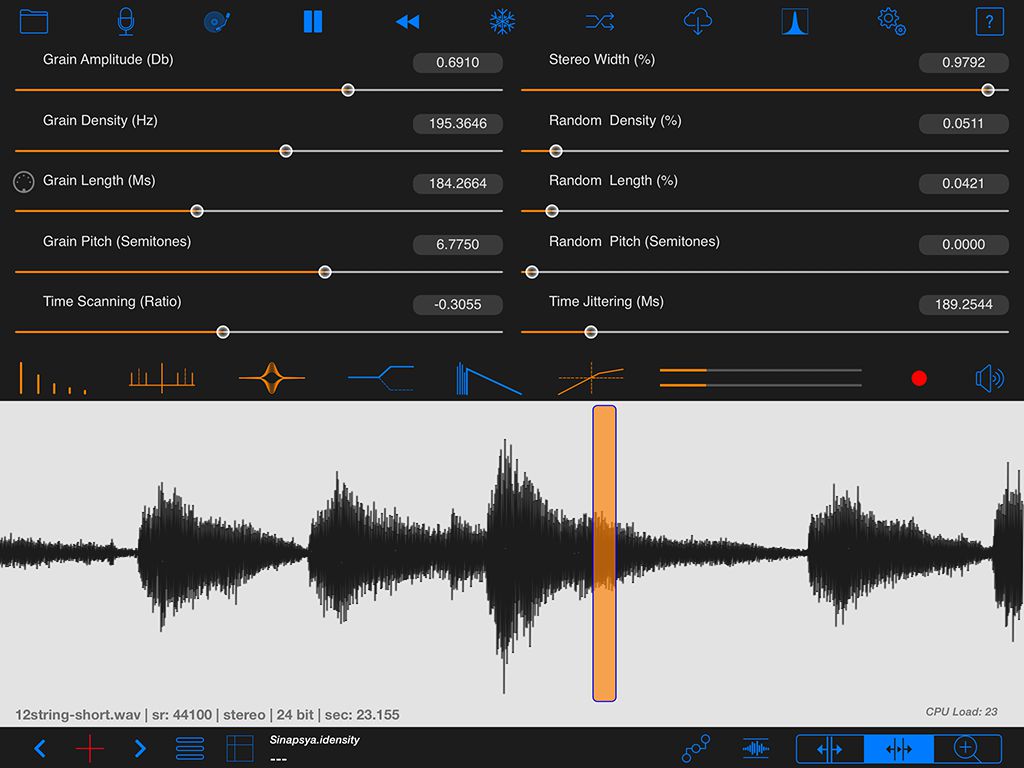 I used this app a lot on Paul McCartney's album 'New'. There's a Harmonium type sound bed on the track 'On My Way To Work' that is me slowly scrubbing Paul's 12-String guitar chords in iDensity. We also used it on guitar feedback through a bunch of pedals like Wah and Delay to create some cool textures and FX on other tracks.