Language
With all the attention lavished on both the technical and creative uses for compression in the studio, we sometimes forget about the other kind of dynamics processor'"the Gate/Expander.Â Here's 4 tips.

Just as a quick reminder, an Expander works opposite to a Compressor—instead of reducing the gain of signals above a Threshold level—making louder sounds quieter—the Expander reduces the gain of signals below the Threshold, making quieter sounds even quieter, increasing—expanding—the dynamic range, rather than decreasing—compressing—it. When quiet sounds are further reduced to the point where they’re no longer audible, this most extreme degree of Expansion is Gating. Gating is probably the most common application for Expanders, to get rid of unwanted noise and leakage in recorded tracks (when carefully applied), but it can be pressed into service for other, more creative, uses as well. Here are 4 tips for getting the most out of these often-forgotten studio tools...

1. Watch out for artifacts—use Attack & Release for transparent Gating in playback 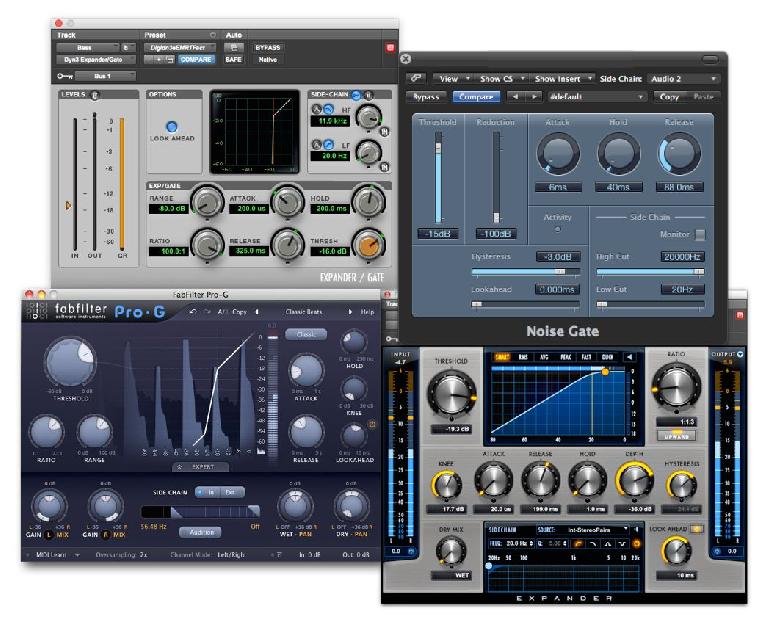 Fig 1 A couple of Gate/Expander plug-ins

A well-set up Noise Gate can quickly and easily clean up all manner of unwanted sound/leakage in a recording, but it can also accidentally cut into the desired audio as well. Remember, the Gate’s action—removing lower level sounds—assumes that all sound below the user-set Threshold is unwanted noise and leakage. But this isn’t always the case—sometimes parts of the main signal also fall below Threshold, and can be accidentally Gated out. This can produce a couple of artifacts—the beginnings of notes/words, coming back in after a Gated break, may start off softly enough that they won’t cross the Threshold (causing the Gate to open back up) until it’s too late, cutting off the initial attack or syllable, or even just the initial letter of a word. The other issue is with the tails of notes—decaying notes may be cut short, or one that has a little vibrato/tremolo on it may linger around the Threshold momentarily, wavering below and above it, causing the Gate to open and close rapidly, producing a scratchy sound as the note dies away. This effect is referred to as “chatter”, and it needs to be avoided.

Careful use of the Attack and Release controls can help with these potential Gating artifacts. Assuming you’ve found the best Threshold setting, a very fast Attack will insure that the beginnings of notes/words will get through cleanly when the Gate opens back up after doing its thing. However, too fast an Attack might possibly cause clicking—it could create an initial attack envelope so quick that it, in effect, creates a small transient of its own. You might want to dial up Attack times no faster than around a millisecond or so, if you perceive any clicking in the attacks of notes when the Gate is in use.

On the other side of the coin, a slower Release can help with any chattering, or notes that cut out too quickly. Eventually any decaying notes will hit the Threshold and be gated out, and a too-fast Release will interrupt the natural decays of the notes. A slower Release will still let gating begin as the decaying note crosses below the Threshold, but if you can match the rate of the Gate’s Release to the average rate of the notes’ natural decays, then you’ll have greater leeway for finding and setting an effective Threshold, without the tails of notes suffering from any unnatural change in length or falloff.

But the ideal settings for Threshold, Attack, and Release may not be consistent throughout an entire recording. When that’s the case (which it may be as often as not), using a Gate on the way in—on the incoming signal before it’s recorded—may simply trade one problem (leakage) for another (notes with altered attacks and decays). Though it can be tempting to Gate on the way in and get that bit of processing out of the way, making one less thing to deal with in the mix, it can potentially create more problems than it solves. But if Gating is done on already-recorded signals, then, if artifacts are noticed, you’re not stuck with them. Which brings us to… 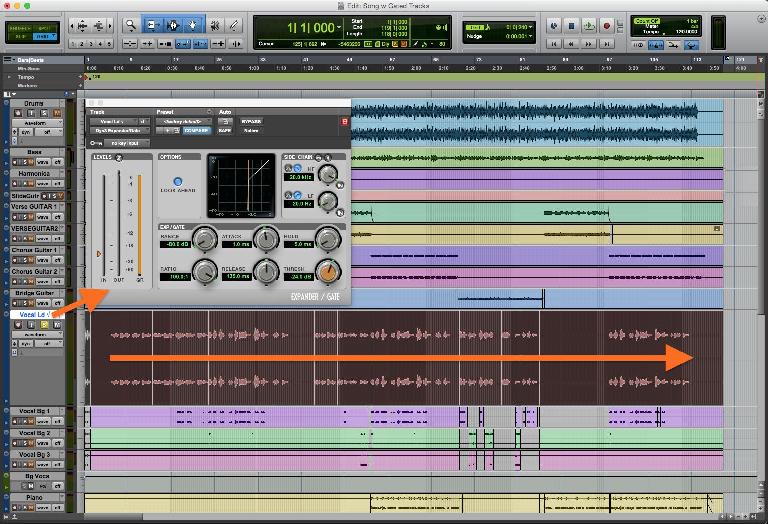 If you do employ a Gate on certain tracks, once again, it can be tempting to find good Threshold, Attack, and Release settings while looping a small section of the song, set them, and then quickly move on. But, while it may be more time-consuming, I’d recommend checking the full length of the song for Gating artifacts (as above), with each Gated track soloed—you can never be sure that somewhere, subtly, the Gate isn’t cutting out something it shouldn’t.

You may not notice it when you’re focused on other aspects of the mix, but I promise you, eventually someone will pick up on it—in a worst-case scenario, somebody listening to the finished mix will point out to the artist “hey, isn’t the beginning of that word cut off?”, or “didn’t you hold that note longer?”. A little time spent anticipating and dealing with subtle problems like this ahead of time (by automating the Gate’s parameters, for example) can save some embarrassment, or forestall a more significant problem later on.

3. Take my breath away—or maybe not so much

Besides eliminating leakage, one of the other applications for a Gate/Expander may be to deal with excessive breath sounds in a vocal recording. Of course, it’s natural for singers to breathe between phrases, but some singers—especially inexperienced ones—may not have mastered the art of subtle breathing, and you can end up with a track full of loud gulps for air that make the singer sound like he/she is practically drowning. The compression that’s commonly used on vocals will accentuate these even more, to the point where they’re beyond natural breathing and need to be addressed. Of course, you can edit them out, but a Gate could make for a quicker solution (needless to say, that Gate needs to be inserted ahead of any compression that may be applied to the track, which would make it harder for a Gate following it to do its job successfully).

But completely removing breath sounds might not be the way to go—as I said, they’re a natural part of singing (and spoken word recordings, as well), and if they’re removed completely, it can make the vocalist sound somewhat breathless, even subconsciously making listeners tend to hold their breath as well.

A better choice might be to lower the level of the breaths without completely eliminating them.

Some simpler Gates might have no way to do this—they’re all or nothing—but most can be operated more gently, shifting from full-blown Gating to more gentle Expansion. The degree of gain reduction can be reduced, so when it does occur, it doesn’t completely remove the breath sounds, it just attenuates them to an appropriate degree, until they sound like they’re in good, natural, unobtrusive balance with the rest of the performance. A Range or Ratio control (or both, if available) would be set to a less extreme value—for example, instead of a range of -80 dB gain reduction (full-blown Gating), you could set -15 to -20 dB, reducing the breath sounds but still leaving just enough of them for a natural-sounding track.

Audio Example 1—A track with loud breaths; the Gate minimizing (but not removing) the breath noises:

4. Get creative—a Gate is not just a tool 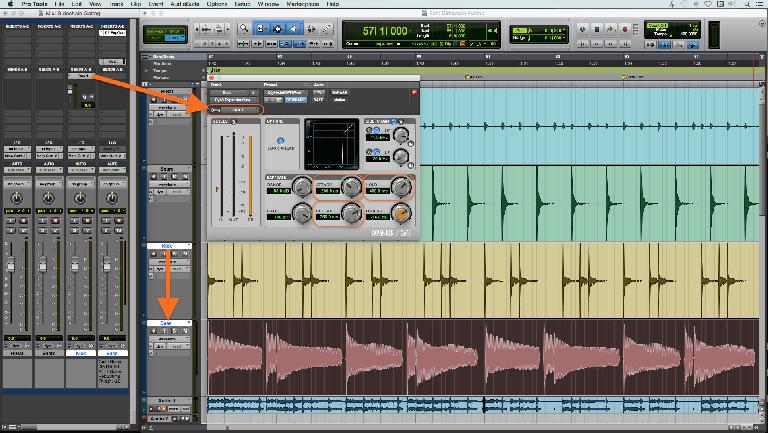 Besides using a Gate/ Expander for problem-solving, you can also press one into service for creative applications as well. A Gate can be employed to tighten up the timing of one part to another, and even impose an envelope on notes. Here’s a common trick many people like to do with Gating on a bass track...

Let’s say you have a bass track that’s a good part, reasonably well played, but its timing is just not quite tight enough with the kick drum—the bass is rushing just a bit, rather than locking in with the more laid-back groove the drummer is laying down. Well, of course, nowadays, you could go in with your favorite time-shifting software and elasticize or flex the part into submission, even going so far as to fully quantize it. But you could also—possibly more subtly—lock that bass in with the kick drum by utilizing a Gate controlled via a sidechain. This can let you not only lock the bass to the kick’s timing, but also modify the bass player’s performance as well, controlling the length (the decay) of his notes. Here’s how you’d set it up...

The Gate would be inserted on the bass track, but instead of using the bass signal to determine the Threshold, you’d enable the plug-in’s Sidechain input—that input would be fed from the kick drum track. With this routing in place, and the sidechain enabled, you’d be setting the Threshold based on the level of the kick, but applying the Gating to the bass—whenever the kick hits, the Gate will open up, letting the bass through. So any early bass notes, ahead of the kick, will stay gated out, until the kicks come along, insuring that both kick and bass hit together.

With the Attack and Release controls, you can further tweak the bass. If you decide you want to change the bass player’s performance a bit, you can have him follow the kick part in lockstep, and even alter the lengths of the bass notes with the Release control. Depending on the Threshold, a shorter release can be employed to cut the decays of the bass notes, taking the part from legato to staccato or pizzicato. Some Gates have an additional control—Hold—which works in conjunction with the Release, and will provide further control over the shape of the notes’ decays. When Hold is added to the mix, it keeps the Gate open for its set length of time after the Threshold is crossed, and the Release kicks in only after that. The combination of Hold and Release controls would let you not just shorten the decays, but shape the decay envelope, allowing more creative control over that modification of the original performance.

Audio Example 2—A bass not tightly following the kick; that same part Gated to better match the kick’s part and timing; decay of the bass notes shortened by the Gate’s Release and Hold controls:

So don’t forget that, when it comes to dynamics, compression is not the only game in town—a well-used Expander/Gate can come in handy for many things, from cleaning up leakage, to managing breath noise, to applying creative modifications to certain performances. Even in the modern world of elastic this and flexing that, the humble Gate/Expander still has its place.

Improve your audio production knowledge & skills in The Ask.Audio Academy here.
Prev 1/4 Next
1Artifacts 2Checking the song 3Take My Breath Away 4Getting Creative