Sometimes it's the little things that make all the difference - tips, tricks and techniques that can take a recording from good to great. Joe Albano explains four of his favorites.

Standard recording and mixing techniques can always be relied on to get the job done, but at times it’s worth trying something a little different. Here are four suggestions for approaches that might help achieve subtly better tracks and mixes. 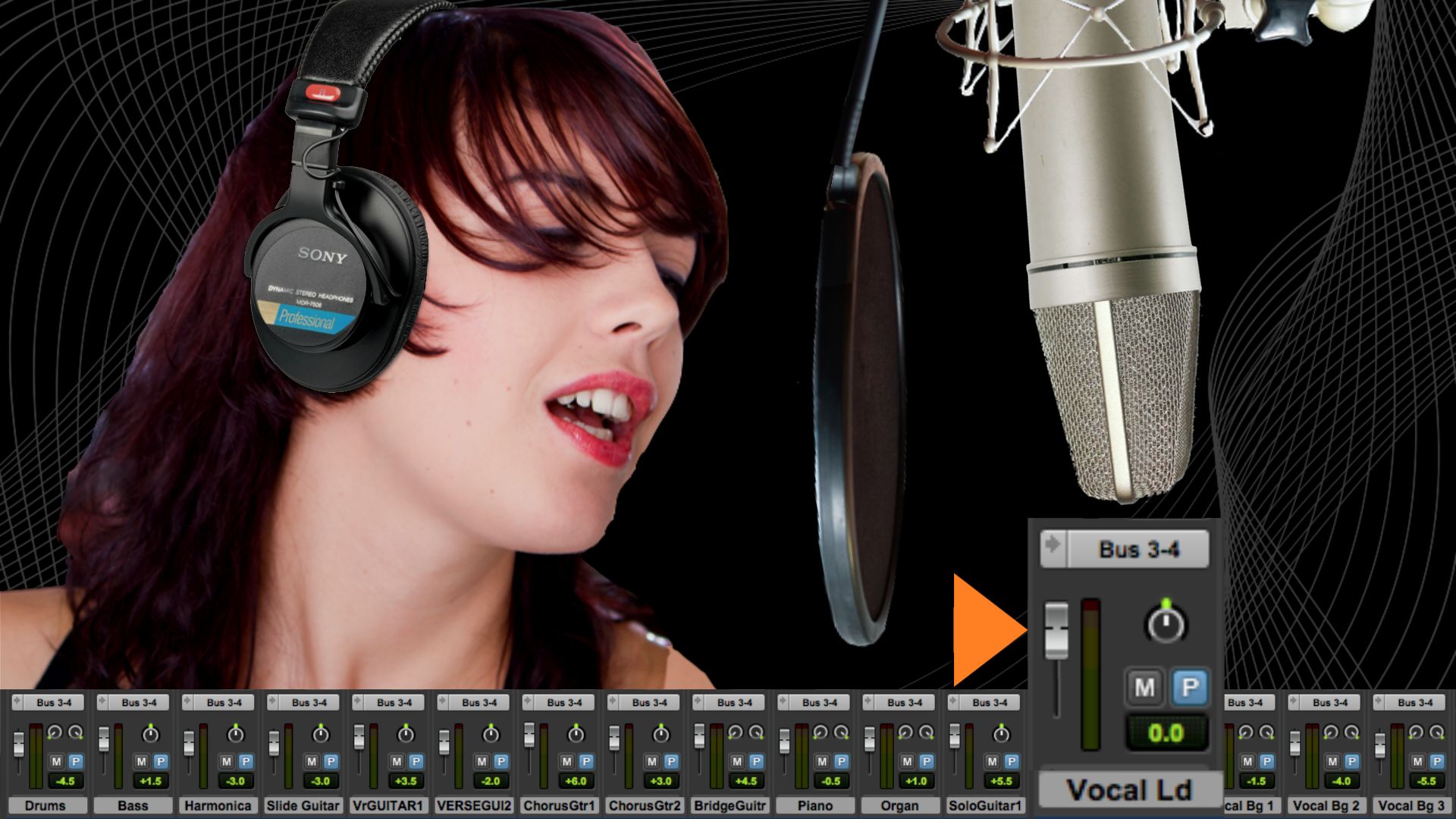 Push the singer during tracking

When recording vocals, standard practice is to give the vocalist a (rough) monitor mix of the track in the headphones, and set the voice itself to a level comfortably louder than the backing track. The idea is often for the singer to be able to hear the nuances of their performance clearly in the phones, with just enough of the backing track to stay in time and on key, and to react musically to the instrumental performance. Typically, the producer and engineer will defer to the wishes of the performer as to the specific level balance between singer and backing track, and this is fine most of the time.

However, sometimes a producer may decide that the typical or preferred level balance between voice and track is not getting the job done as well as he’d like. If the singer’s voice is very loud in the cans, and the track relatively low, the vocalist won’t need to push his voice very hard, and this could result in a more subdued, even lackluster performance, which could be problematic, especially with more aggressive musical styles. The singer may not realize this - he/she may be holding back subconsciously to avoid drowning out the music, but it might be obvious to the producer in the control room.

Sometimes, rather than critique the performer - which can result in hurt feelings and inhibit the performance, the opposite of the intended result - a producer may very quietly inch up the level of the backing track, forcing the singer to work harder to keep the level of his voice comfortably above the music. The goal would be to get the track to just the right level, where the vocalist has to exert just enough extra effort to produce a more suitably aggressive tone and performance. This can work, drawing better takes from the singer, resulting in more intense, musical performances.

But of course this trick comes with some caveats. The singer may notice that the track is a bit loud for his comfort zone and request “more me”, in which case the producer can either accommodate him, say ok but then continue to push the track, or come clean and (tactfully) explain that he needs a little more intensity from the performance. There’s also the danger that with the track too loud, the singer may not deliver a nuanced-enough performance. And of course, if the singer has to push more than usual over the course of multiple takes, he could blow out his voice prematurely, putting an end to vocal takes for the day. But if it works, it can be just the ticket to getting a little more vocal oomph. 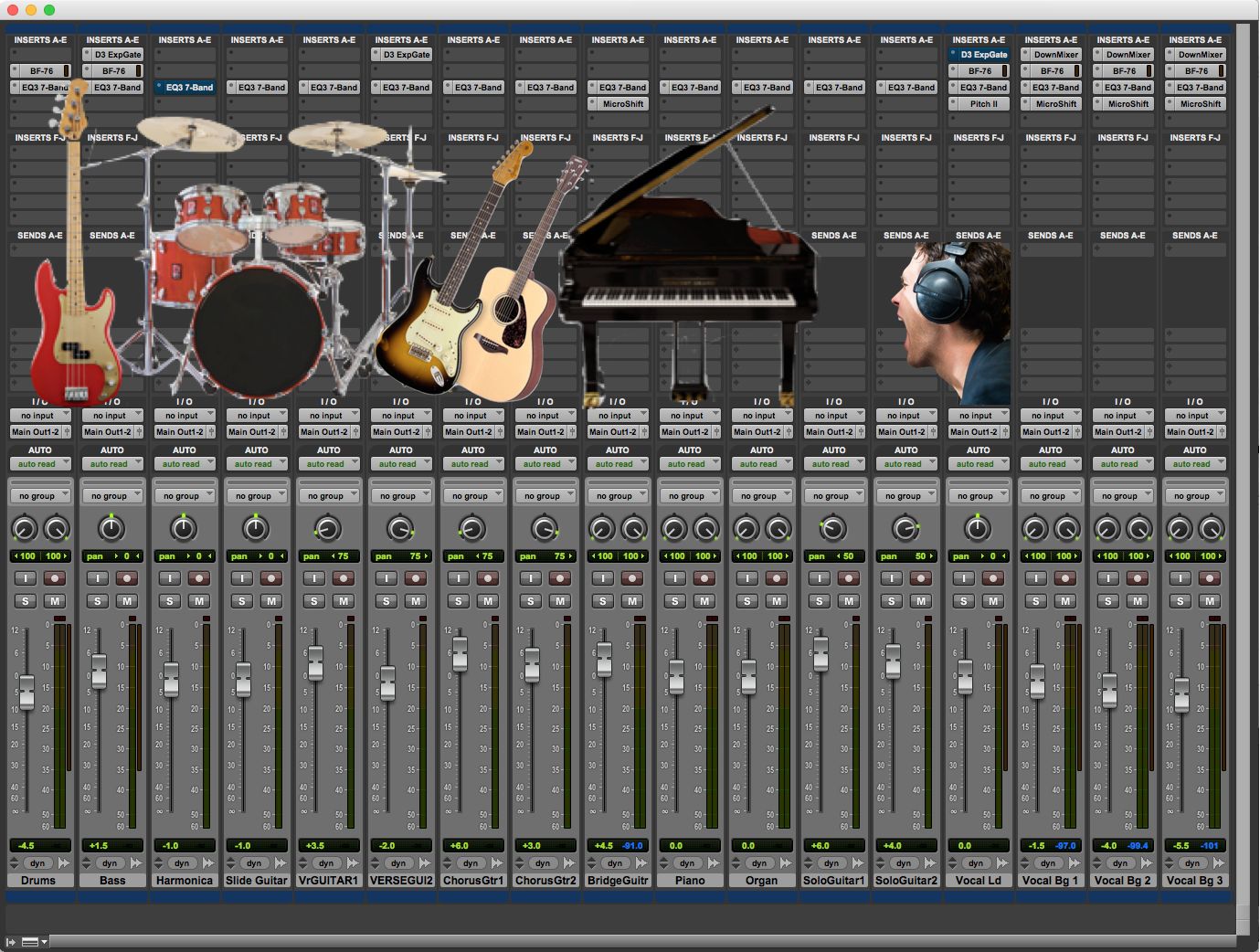 Push the track during mixing

A related trick at the mixing stage also involves deviating from more typical balances between vocal and track, but this one is designed to make the track, rather than the vocal, sound more aggressive. In many musical genres, standard operating procedure in mixing is to have the lead vocal float comfortably above the backing track - after all, that’s the lead part in the arrangement, the main melody and focus of the song - plus, you want the lyrics to be easy to understand. But a side effect of this up-front vocal approach is that the backing track may end up sounding a little wimpy - if the drums, guitars, and synths seem to be too easily overpowered by the voice, it can convey a subconscious impression of less-than-intense instrumental performances, giving the song a somewhat laid-back vibe.

While this may be fine for many musical styles, if the genre and the tune calls for more aggressive playing, the impression of a laid-back track might suck some of the energy out of the song. This can especially problematic with today’s heavy compression, which may be robbing the track of its percussive impact, pushing it even further into the background. So when it’s appropriate to the musical style, many mixers like to employ an old trick of mixing the vocal “down” - further into the mix. They don’t bury the vocal completely - that would be counter-productive - but if they push it down into the track just far enough, the track may subconsciously start to be perceived as more energetic - not just louder but as a collection of more aggressive performances.

This can have a beneficial effect on the overall vibe of the song. If it sounds like the singer is straining to stay on top of a bunch of loud, cranked musicians, that may impart a more live, pushy feel to the tune, offsetting what might be a group of somewhat more careful, less intense studio overdubs. If the mixer gets the balance just right, the voice will still come through clearly enough, and the lyrics should still be intelligible enough to work. (Although the latter concern may or may not be as critical with all performers - for some singers unintelligible or barely intelligible lyrics are part & parcel of their vocal style).

Combining this trick with the previous one can work well - a more aggressive performance captured at the mic will hold up better when it’s mixed down into the track, and - in the best-case scenario - all the performances can end up sounding suitably intense. 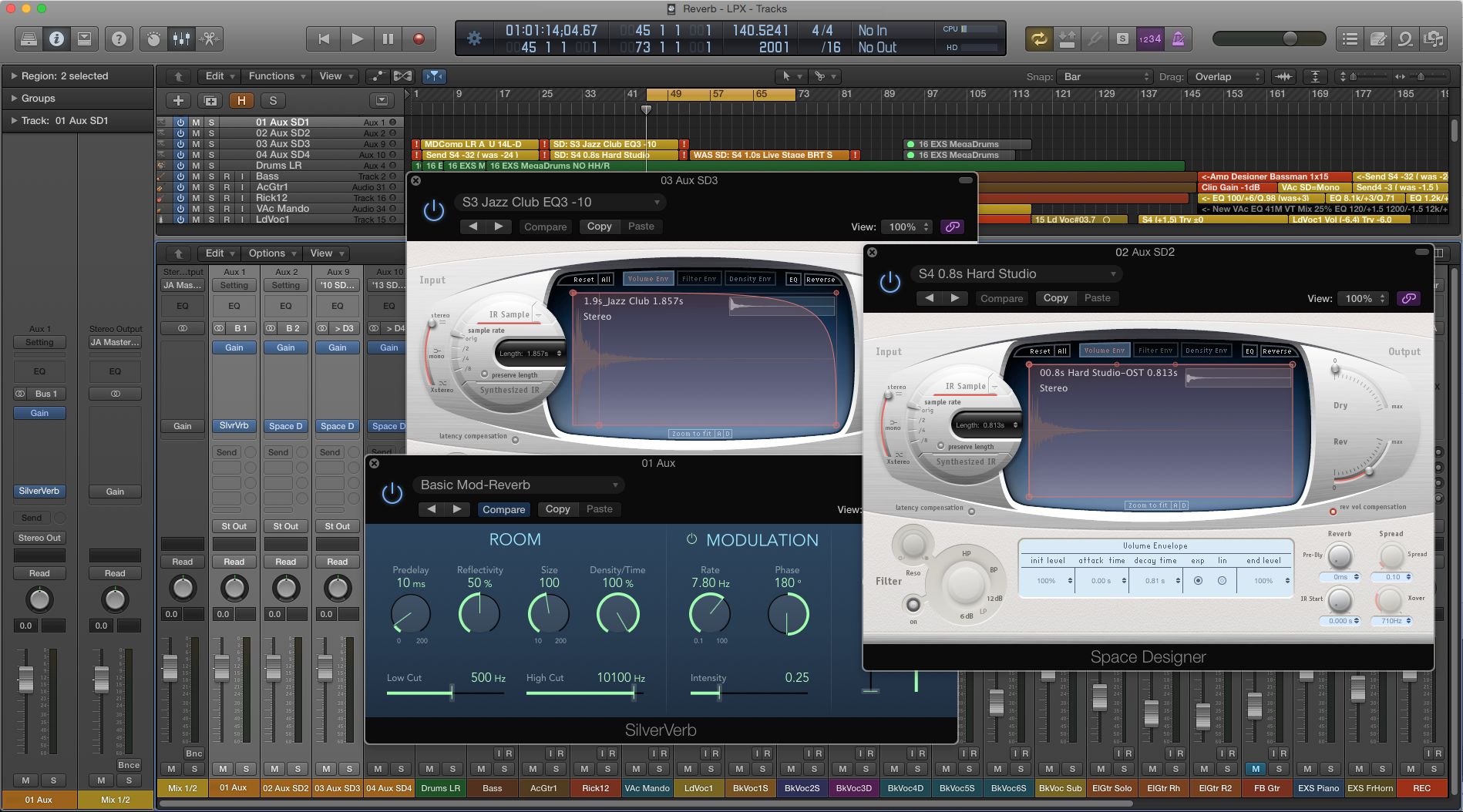 Multiple reverbs combined in a mix

Most engineers who record live drums are probably familiar with the practice of setting up extra mics: in addition to the usual close mics and stereo overheads, it’s often common practice to put up additional stereo “room” mics to capture a more ambient, “bigger” version of the same drum kit . (Obviously this assumes that that sound is appropriate to the musical genre, and the recording space is a suitably large, live-sounding room.) In the mix, the room mics are then blended with the others for an exciting ambient quality, and an extra sense of depth for the drums.

But what if you’re mixing a song, and you’d like to do that with the drums, but there are no room mics, or the drum part is coming from a sampled kit with only tight, relatively dry samples. Well, obviously you can add an artificial reverb to the drums, but to approximate the technique of blending close mics, overheads, and room mics, don’t just stop at one reverb. Open up two or three reverbs, with different settings - one that’s mostly short, Early Reflections; another with a general, medium room sound, and a third with a large very ambient space. Insert each of these in a separate Aux, and then - assuming the individual drums are available on separate tracks - send different amounts of each drum to the three reverbs in different proportions. This way you can blend in different amount of the various reverbs: adding more room to things like kick and snare, keeping hihats a little tighter and drier.

Besides enhancing the character of the drums, this can add extra depth to them, for a more in-the-room vibe. You can send other tracks in the mix, in varied proportions, to those same reverbs as well. Varying the amounts of the different reverbs can help dial up a subtly different sense of depth for different drums and mix elements - for example, more of the ER verb vs more of the big room can push a track a little forward or back in the virtual soundfield, for a subtly more three-dimensional quality to the mix. 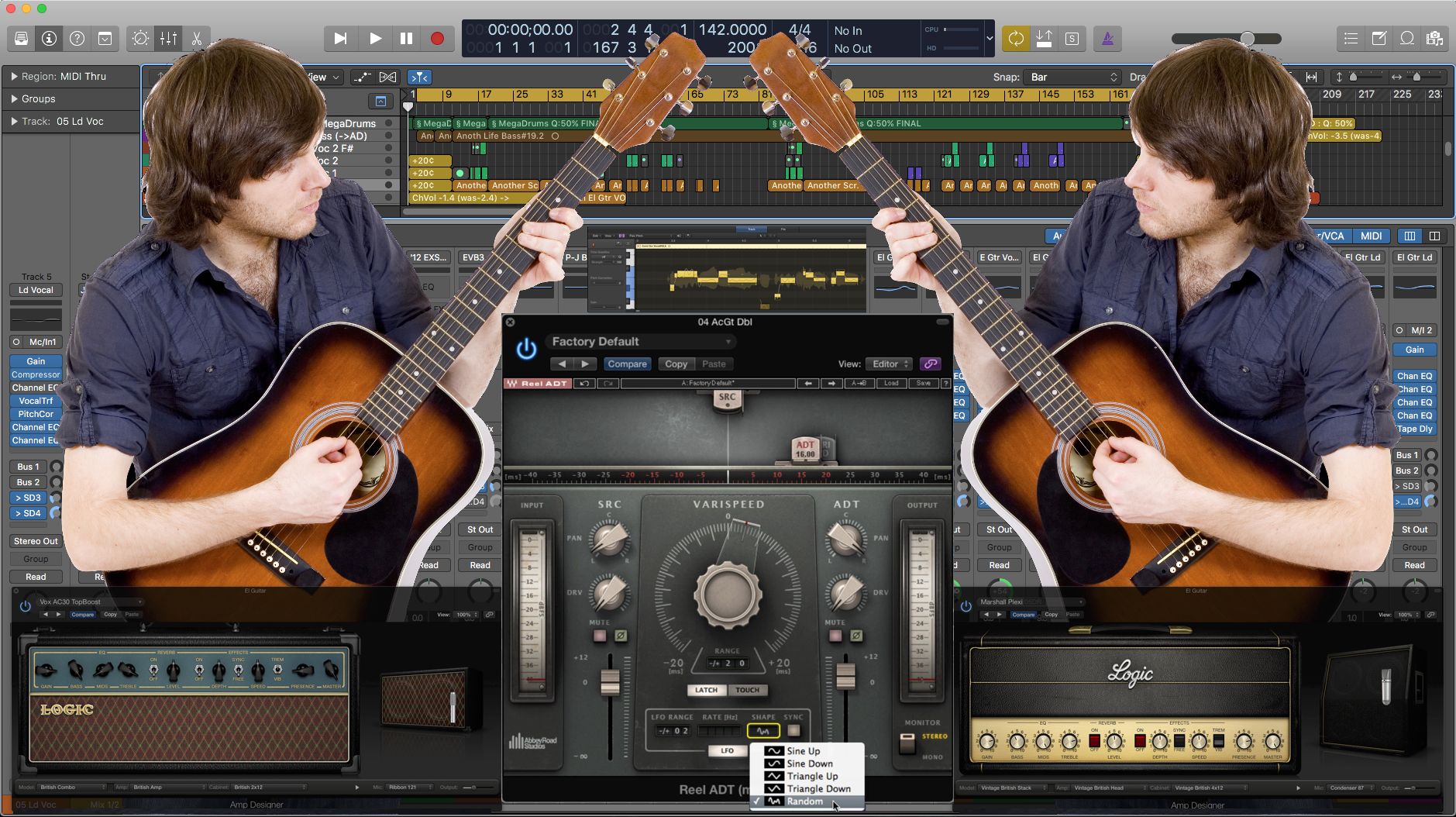 Every mixer knows and uses doubling techniques to fatten up tracks and fill out space in a mix. Sometimes doubling is accomplished with the use of two actual performances; other times the doubled tracks are artificially created (ADT) by duplicating and slightly delaying various tracks. In either case, wide-panning doubled parts in an arrangement can fill up space in the mix, and sometimes help to achieve a better-balanced stereo image.

At times, a mixer will want a doubled part to simply sound like a fuller, fatter version of one part. But other times, the goal is to sound like two distinct, separate performances. When the doubled parts are different performances, this is a given, but when doubled parts have been artificially created with delays and panning, they may still not be distinct enough musically to suit the arranger’s or mixer’s needs. Doubled rhythm parts may be too tight in their timing to sound natural, and doubled vocals may lack the normal pitch variations typical of real performances, for an overly-mechanical quality, which may not suit looser, more organic musical styles. But there are any number of things you can do to distinguish ADT-doubled parts, and give them more individuality.

In general, if a doubled part is the result of standard ADT techniques - the use of a delayed copy - applying random modulation to the delay time can help “humanize” the simulated separate performance. Not all delays include random mod, but many do - a good example is Waves’ Abbey Road Reel ADT plug-in, which emulates the old Abbey Road tape varispeed effect, renowned for its distinctive sound. When doubling MIDI tracks, it's usually possible to impose random variations in timing and velocity on the copy, again achieving a more organic doubling effect.

Of course, any doubled audio track can be EQ’d for a distinctly different tonal quality than the original - staggering frequencies can help distinguish the tracks. For ADT-doubled electric guitar tracks, different amp sims can be applied to the two (or more) versions, and along with panning (and the other techniques mentioned here), this can really make it sound like two different performances.

Today’s modern tools for time and pitch editing can also be employed to distinguish artificially-doubled tracks. For example, with doubled vocals individual pitch and time variations can be dialed up manually - visually - for more nuanced variations, and even subtle formant-shifting can be brought into play. Formants are the fixed resonances that define the character of each voice - shifting them up or down by a semitone or so can impart a slightly different character to a doubled part. Larger formant shifts can change genders, and though that will probably sound decidedly unnatural in isolation, blended into the mix below the original recording, it might start to sound more like a real, loose chorus of different voices, rather than a tight electronically-created vocal wash.

Experienced engineers and mixers are probably familiar with all or most of these tricks, but up-and-coming practitioners of the recording arts might want to give one or two of them a try, when they feel it would be appropriate - individually, they may all be fairly subtle, but several such techniques together might make for better, more musical performances and looser, more natural-sounding mixes.