It could be argued there's no more crucial element in dance music than the drums that keep everything moving. Here's five quick tricks to make your drums stand out from the pack.

This is a quick way to get thin-sounding polyphonic drum pads fattened up in a jiffy. Got a particularly thin sounding clap or rim shot? Drop a chord effect directly on the desired drum pad and start adding steps to the six different shifts available on the chord: lower octaves tend to be louder, but higher octaves can brighten up the attack considerably. Try adding different values on all six chord shifts, then disable the chord to isolate the difference.

The best part is, since it's a MIDI effect, the CPU drain is negligible. However, this should only be busted out on particularly thin parts and used sparingly on any sounds that already have something close to their desired girth.

This next tip is especially useful for bringing out some character in the highs and high-mids, giving hi-hats in particular a noticeable sheen, yet really helps to round things out with harmonic excitement across the frequency spectrum. It's easy: just grab a Saturator device and place it on your drums; then, from the drop-down menu beneath the Waveshape viewer, select “Sinoid Fold”—you'll instantly notice how it brings everything a step forward in the mix. 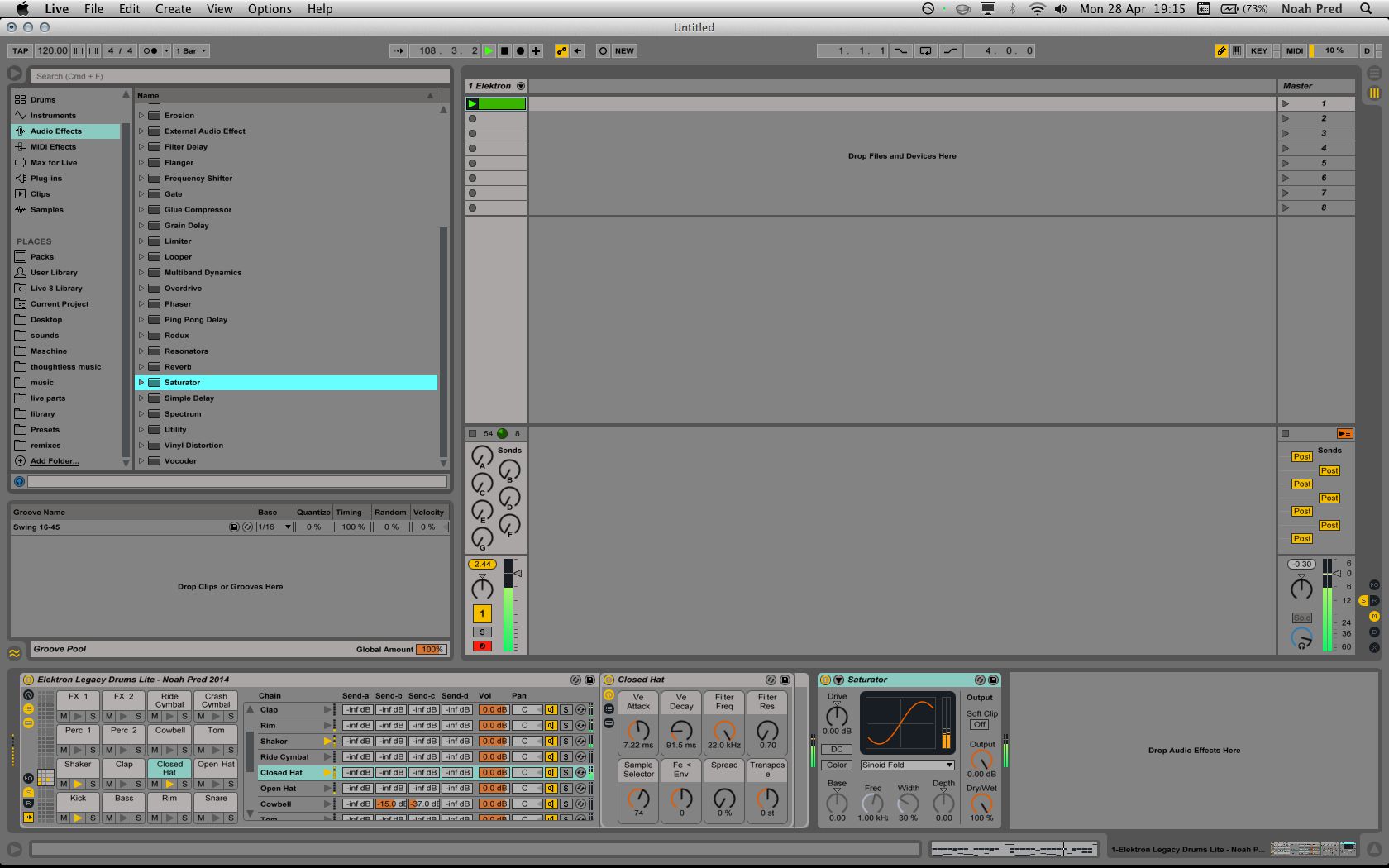 You may wish to use it sparingly, however, on bass-heavy sounds. You can also right-click the title bar of the Saturator device and engage the high-quality mode from the menu that appears—or set the current settings as the default for future Saturator instances.

It seems like everyone knows about sidechaining by now—it's an essential characteristic of many styles of dance music. But with Live's flexible routing system, you can sidechain different drum pads within a drum rack from other sounds simply by selecting them from the list of available drum rack source signals in the Compressor's sidechain drop-down menus. However, there's another way to achieve a similar (though not identical) result, which is choking. Choking is the technique used to “shut” open hi-hats once a closed one is played.

A drum rack's choke routing can be set in the Chain view with the rack's In/Out routing matrix visible; any two sounds set to the same choke group number (of which there are 16 available) will effectively cut playback of the others in that group when triggered. You can have a lot of fun with this when there are sounds with longer decays rhythmically interacting with one another.

New York compression is a studio technique based on blending an over-compressed signal with the original, dry signal. In prior versions of Live, this required some tricky send and return routing, but with the new Glue Compressor's Dry/Wet control, it's easier than ever. You'll want to put one on the entire drum track and give it some extreme settings: -40 dB threshold, a ratio of 10, a longish attack time of 3 ms to retain your transients and a relatively short release time of .4 or so; you can adjust makeup gain to taste.

Once the compression is nice and brutal, start dialling the Dry/Wet blend back towards the dry side until you've got it sitting how you want—the result is a nice, punchy blend of slap-happy transients, pumping noise and the original clean signal.