The sound of these legendary consoles can be heard on countless classic albums spanning many genres. Even in the software age you can still capture it, as Joe Albano explains.

Along with the many software simulations of classic pieces of analog outboard gear—the virtual Pultecs, Fairchilds, LA-2As, 1176s, and the like—the classic consoles of the analog era are also a popular target for virtual emulation. Here’s a brief look at some of the most iconic large-frame desks from the 60s, 70s and 80s.

No discussion of classic analog consoles would be complete without a mention of the SSL 4000-series boards that set the standard for studios in the 80s. SSL ruled the roost for many years, and there were a number of models that became ubiquitous in studios in that period, but the 4000-E and 4000-G are the ones that many people feel set the standard—in fact, so many records have been recorded and mixed on these boards that they’ve come to define the sound of 80’s recordings. 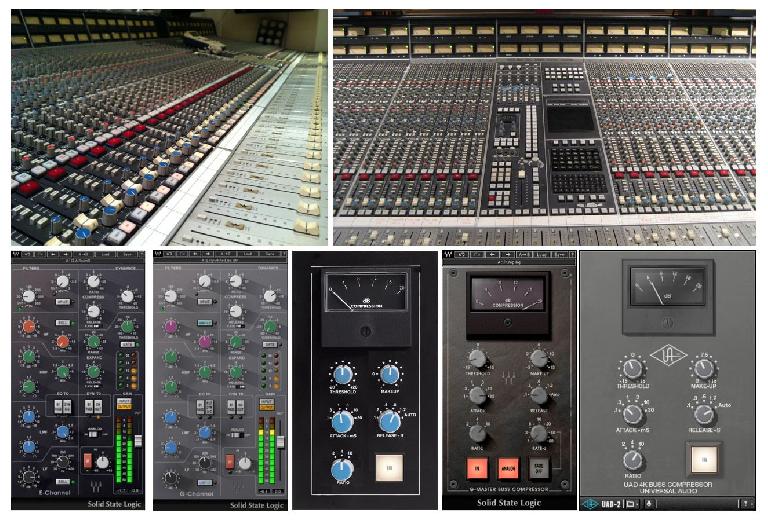 The E and G the standard for large-frame consoles, with their parametric EQ and full Dynamics sections. The sound of the EQs in these boards are one of the main draws for those who turn to modern emulations—since the behavior and character of the E-series and G-series EQs differed slightly, most models include both, providing SSL aficionados with as much flexibility as they could want.

Another feature of the 4k consoles—maybe the most popular of all—is the famous SSL Master Buss Compressor. Nicknamed “The Glue”, this stereo VCA-based design was included in the master section of the 4000-G, and is renowned for it’s reported ability to “glue” the elements of a mix together, providing a more coherent blend of instruments and voices. It’s likely that many people pick up one of the many 4000-series console emulations specifically for this component, which still enjoys its cult status today.

Back in the day, SSL’s biggest competitor was Neve, whose boards were favored by many who ascribed a more “musical” sound to them, thanks in part to their EQ design, which was felt to be more gentle and, well, “musical”, with broader curves and a more subtle overall character. Neve’s later large-frame models like the 88RS went toe-to-toe with other high-end boards like SSL’s 9000 series, and the 88 is also offered up as an emulation by at least one company, but Neve is probably most famous for their 70’s consoles—the 80XX-series, which gave the industry the legendary 1073 (and 1084) preamp and EQ modules. 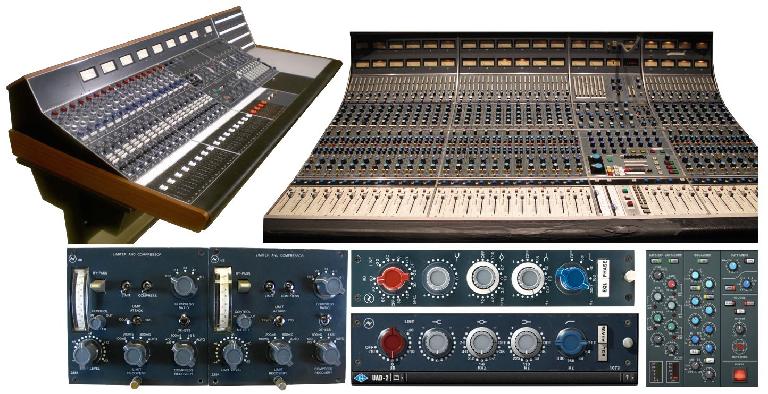 The 1073, in particular, is found on many engineers’ shortlist of desert-island audio gear—its Class-A circuitry and transformer-based design give it a big, warm “analog” character, and for many people the EQ defines the classic “British” console/EQ sound. Neve’s consoles also incorporated a compressor that is undergoing a resurgence in popularity—the 2254 (along with its later rackmounted successor, the 33609). The 2254 employed transformers and a diode bridge for a distinctive edgy yet warm sound, and thick, creamy compression characteristic, and a large number of both virtual models and hardware emulations are proving popular with those looking for that unique sonic signature.

For many, API consoles were/are America’s answer to the British-made Neves and SSLs that dominated studio control rooms in the heyday of analog. Models of API’s gear generally go for the most popular console components, including the classic 512 preamp, 550 EQs, and 525 (and later rackmount 2500 bus) compressor, all of which brought their own particular sound to the table. 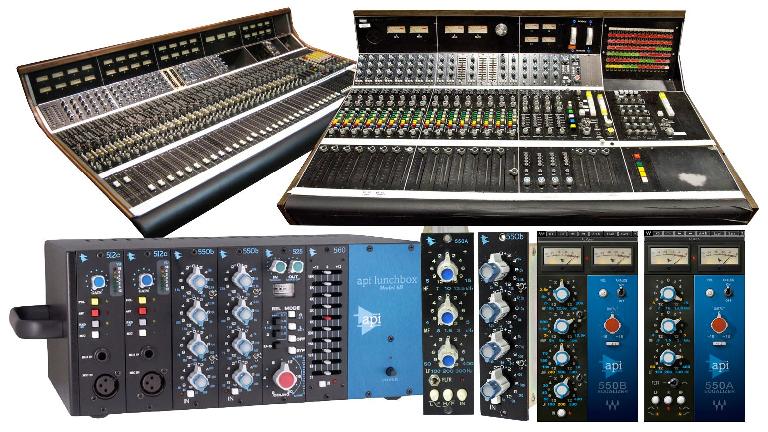 The 550a (three-band) and 500b (four-band)  EQs are probably the most widely used and emulated of these classic components—the 550b’s “Proportional Q” design automatically adjusts the bandwidth at different degrees of boost and cut, giving this EQ a distinctive response, and a different vibe from “British” EQs. Most of these API components are available in both virtual emulations and hardware form, with the hardware models utilizing API’s popular “lunchbox” format.

In the 60’s and 70’s, EMI’s REDD division designed and built several custom consoles for use in their flagship studio, Abbey Road. The all-tube REDD series—the REDD.17, REDD.37, and REDD.51 models—utilized Siemens' V72 “valve” amplifiers throughout for a warm, rich sound, heard, of course, on many of the Beatles’ earlier recordings. Later, the REDD tube consoles were supplanted by another REDD design, the solid-state TG12345 console. 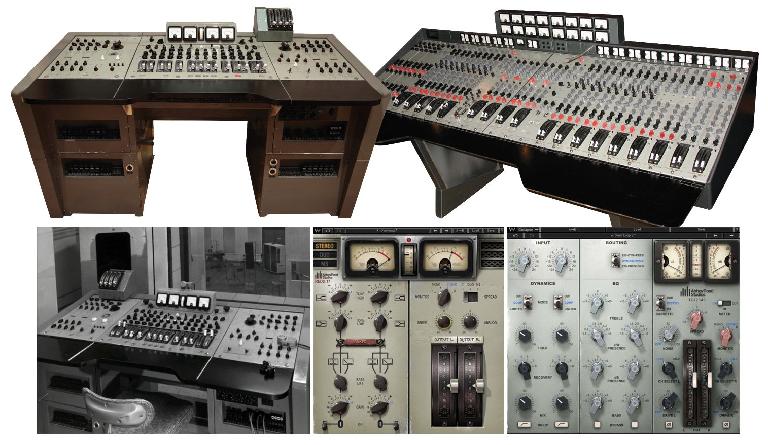 With a classic EQ section, and a distinctive compressor design (loosely based on EMI’s preferred Fairchild and Altec compressors), the TG12345 lent its warm but clear sound to the Beatles’ Abbey Road album, as well as numerous classic albums from Pink Floyd, among many others, throughout the 70’s. TG-series component emulations are available in both hardware form, from Chandler, and software, from Waves, both in collaboration with Abbey Road Studios.

Of course, there were many other fine analog consoles back in the day, and quite a few of them are also found as virtual emulations, for those who remember the originals and crave a little bit of that classic sound and vibe. 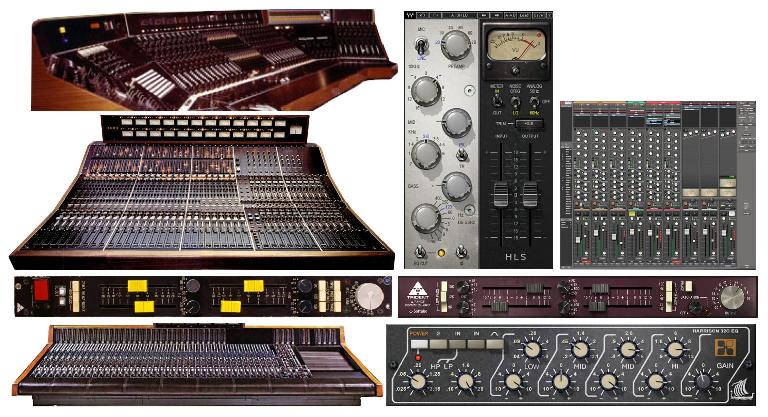 Consoles and emulations of Helios, Trident, and Harrison gear

Helios was never as well-known as the the big British console makers—Neve and SSL—but their consoles were used in some of the biggest studios in the 70’s, to record and mix many of the biggest acts. Transformers and a quirky EQ gave Helios boards a distinctive quality, and this is reproduced in several plug-in versions, including offerings from UAD and Waves.

Malcolm Toft’s Trident Audio was another popular British console maker—their A-range boards, with another distinctive EQ design, was never made in large numbers, but were used on many top records, including some of David Bowie’s classic recordings. Emulations from Softube and UAD capture their particular sound.

Harrison consoles may also have not been as widely known, but were (and are) well-respected—the company currently offers not only hardware products but their own software console. Harrison successfully made the transition from analog to digital, and their Mixbus DSP mixer software (Mac/Windows/Linux) emulates the sound and vibe of their classic analog boards.

So even though, except for today’s largest production facilities, the era of the great large-frame analog consoles is mostly in the past, you can still get that sound and feel from a wide variety of software emulations, which succeed in keeping the warm, rich sound of analog production and mixing alive and well even in the digital age.