Language
G.W. Childs has been playing hardware synths for longer than he'll care to mention. But, on the plus side he's used some incredibly beautiful vintage synths. Here's 12 of his favorites.

If you consider how much the variety in terms of synthesizers has expanded since the 1970s, it really will blow your mind. Where there was once only a couple of companies out there soldering, gluing and bolting synths together, now there are several. But, have all of them held up, in terms of delivering a timeless instrument? After all, if you pick up a Roland D-20, you're going to be delighted with a sound palette that really does sound similar to a Barney and Friends kid commercial. But, if you come across an Access Virus, then you'll hear banks of sounds that still hold up quite well, over time. In this article, I'd like to mention my 12 favorite synths (some digital, some analog, but all vintage) that never, in my opinion, get old.

If there was ever one synth that I felt I could be left alone with, on a deserted island (some strange island that has a power generator of course!), it would be the JP-8000 virtual analog synthesizer from Roland. These keyboards, and rack units (JP-8080) still command a decent price online and offer some amazing functionality. But, the sound that they are most known for is that incredible super saw, being moved rapidly by the built-in arpeggiator. It's the stuff of trance... and dreams.

The Nord Lead really has become the GTO, Corvette Stingray of the synthesizer world. Be it either the Nord Lead 1, 2, or 3, they all sport the slick, and fashionable, red enclosure that has graced the stage filled with performers like The Killers and many more. But, don't think that they are all looks. The Nord Lead series, from Clavia, sports limited multi-timbral capabilities, a huge user group, and a sound that really does deserve a place in Rock History. I know it has my salute! 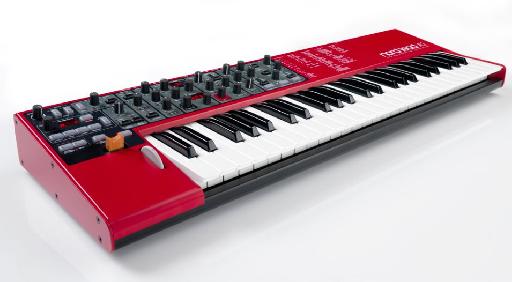 Of course, Moog in the last decade, or two has stirred the electronic music marketplace again, with well-built, expressive instruments, with an amazing sound, designed by the guy that really started it all, Robert Moog. I mean his name is literally right next to the term synthesizer in the dictionary! At this point, in history, be it either a Minimoog Voyager, or an original Minimoog, you're always going to get some points in sound, as well as in pleasing aesthetics when you employ a Moog onstage, and off. My personal favorite, the Little Fatty line of synths, really can step in as a great first-time synth, and continue to grow as a highly useful device all the way up in to live performance, studio recording, or wherever you want your career to take you. Bottom line: Moog= Electronic Musician's Stradivarius.

Though you don't hear as much about the Virus line of keyboards from Access as much as you used to, they still appear on stage, and off, as highly formidable in both the sound, and aesthetics departments. And, because so many of the different Virus synths, from the A, all the way to the Indigo 2, have patches from badass sounds designers like Rob Papen. Well, you can bet that the presets, included will still hold up on the modern dance floor, and off. And, just let me reiterate: these keyboards look and sound amazing. Great eye candy for the stage, and for your ears. The version of the line that I think I loved the most was the original Virus Indigo. It was a solid, little keyboard, that really delivered in the studio, where other synths couldn't even come close. And, believe me, I tried to find a better sound!

Know that when I mention the MS-20, I also mean the mini-version, the old version, and the new version. Of all the keyboard manufacturers out there, I feel, Korg has their fingers on the pulse of their audience. It was almost a decade ago when they surprised us with the USB, MS-20 controller. Then, nearly 10 years later, they are actually really releasing them again! But, if the vintage price isn't right, for a brand new, full analog MS-20 is too much for you. It wouldn't hurt to look around for an MS-2000, used. There's power there, too! 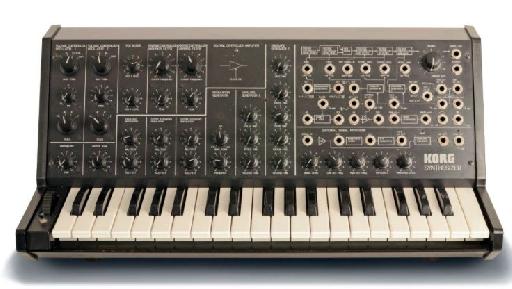 Of course, Dave Smith would have an entry in here! I had an amazing several year love affair with a Prophet VS. Granted, this is back from Dave's Sequential Circuits days. But, it's still one of his babies! This is probably one of the moodiest synths I've ever used. The pads, basses, leads and strings all have that classic, '80s sound, with the Blade Runner twist. And, when you score one of these bad boys, you're even getting a keyboard that was used a lot on the Tron soundtrack, by Wendy Carlos. Note: Programmability is not the easiest! But, the look and sound is right!

Vintage fans of all sorts got a big surprise, this year, as Korg announced that it would be reissuing the ARP Odyssey. While I was at NAMM, David Friend, the original designer/creator of the ARP was honored by the NAMM committee. It was truly an honor to see a synth that has had such a profound impact on our industry given it's just desserts. Just so you know, these synths do not grow on trees. In fact, they are scarce, outside of exorbitant auctions that occur on eBay. Regardless, if you can get one, get one! 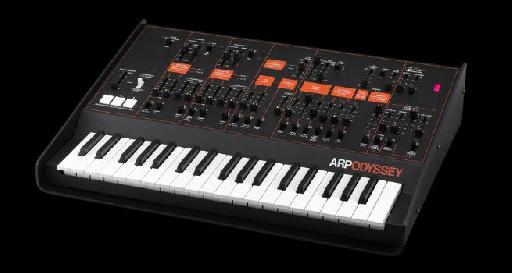 Want to get your hands on a piece of gear that's known, not only for music history, but also for movie history? The Synclavier, just so you know, is in every office at Skywalker Ranch, that belongs to a sound designer. Ben Burtt, when creating the sound FX for the entire Star Wars library used the Synclavier extensively for R2 sounds, ring modulating crashes, blasts and so many other unique sounds from the classic films. But, it doesn't end there. If you look at the list of famous artists who have employed the legendary workstation, your head might spin. Granted, they are big, and bulky. And, they will cost some money. But, if you can find one, you won't be disappointed!

Sure, these synths aren't that old. But, oh my, are they rare! When Alesis put these out, 8'"10 years ago, there wasn't much out there, in terms of real, analog, synthesizers. They were still, all virtual analog. Alesis bucked the trend and made a monolithic, robust, and beautiful synthesizer, with more route-ability than any of us knew what to do with. I actually had one in my possession for a few months, as a kind friend let me borrow it. What a great time! That's all I can say. If you can get your hands on one, grab it! 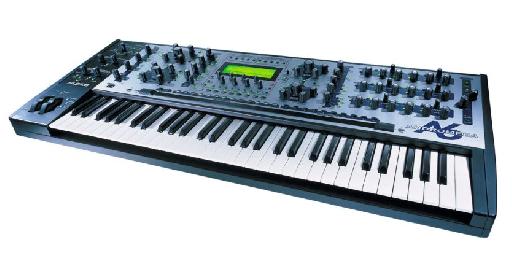 I told myself this page would not be filled with Roland. But, unfortunately, I have a few more to add to the list... As I love them!! The Roland SH-101 was one of the first mini-synths with an optional guitar neck, that could be added on the top. Not only does it sound awesome. But, it has limited sequencing capability and can be perfectly paired with other vintage instruments of all sorts. But, especially, my constant companion, the MC-202. Which I have right here. It also comes in grey. But, keep an eye out. There are other colors, allegedly, floating around out there! 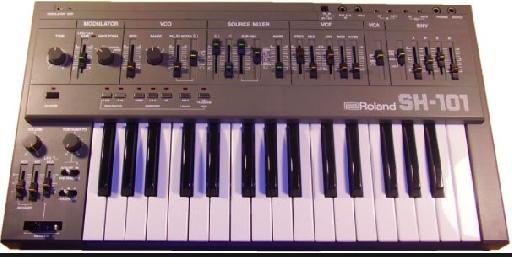 Remember phase synthesis? Well, Casio does! And, a lot of synthesists from the '80s can tell you... It wasn't that bad. Good enough for Propellerhead to incorporate the technology in Thor. And, if you can score one of these synths, good enough for you. I had a great practice with one of these, in an abandoned home, still pumping power, during the '80s. The sound is crisp. And, if you like dreamy leads, plucks, and pads, this is a great synth to get your hands on!

I always wanted one of these synths! This synth, in my opinion, is still ahead of its time. With the ability to actually model sounds that you bring as recorded audio, the Hartmann Neuron can replicate many things, with eerie clarity. And, because it's modelling technology, it can even tell you what that modeled sound might sound like in many other ways that you might not even think of. Granted, a software version was released, a few years ago. But, if you see one, and can afford it, this synth literally might change the way you hear and experience sound, forever. 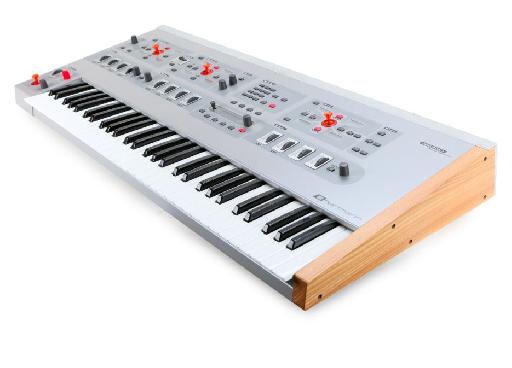 And, that's what I've got. Granted, you may have a very different list. But, this one is mine! These devices all come from different eras. And, they all come from a different mindset. But, they all have one thing in common... They sound great... Still!

Stonzthro
What? No Waldorf? What about the Wave?

Chuyzero
I like how the first two synths listed in "12 of the Best Analog Hardware Synths Ever Made" aren't even analog synths.
Chuyzero
Disregard. Looks like an early draft of this post was accidentally published.
Tyancy
Being of the generation who was making music in the 70s, I guess the notion of "vintage" varies according to a person's age. A number of the synth companies mentioned did not even exist in the days of ARP and Sequential. No matter.

The photo of the Odyssey is of the original design, which had white soft plastic buttons rather than pitch and mod wheels. If someone is looking to pick up an old Odyssey, they should go for the wheel version as it is much easier and more precise than trying to apply a precise amount of pressure when playing. (One trick is to place a finger on a wheel so that when you rotate it, the finger serves as a limiter. As long as your finger stays on the same place on the wheel you can hit the same mark every time.)

One should also beware of ARPs with the black plastic caps on the sliders. There was a period of around a year when the glue used would cause the caps to fall apart. If you're thinking about buying one on eBay, Reverb or wherever, make sure to ask about this. I worked in a music store at the time and one thing we always had to keep in stock was a supply of ARP slider caps, in the full range of color stripes.