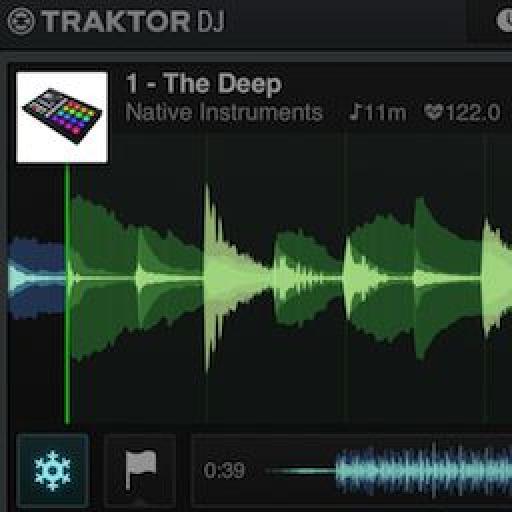 Hollin Jones on May 02, 2013 in Native Instruments 0 comments

Language
It's just you up there, making the crowd groove... with just your iPad! Native Instruments' Traktor DJ for iPad is powerful indeed! In this Hollin Jones shares 10 excellent tips for Traktor DJ users.

There are quite a few DJ apps available for the iPad but none has the pedigree of NI's first fully fledged iPad app, Traktor DJ for iPad. Taking its cues not from the “two turntables” analogy used by many other apps, it instead uses the waveform deck system as found in the desktop version of Traktor. With two decks, independent EQ and effects per deck and clever slicing, hot cue and audio analysis tools, it's the coolest and most enjoyable DJ solution on a mobile device, in my humble opinion. Added to which, with a bit of practice you can sound like a pro on it even if you're really not. But how, I hear you ask? Read on to find out how it all works…

When you first get started with the app, you will probably figure out how to play back tracks pretty quickly, but some of the more advanced techniques initially require a quick pointer to show you how they work. Tap the small “I” button at the top of the screen to reveal the help section. Tap on any of the subjects to see a graphical illustration of how to use your fingers to tap and swipe to achieve techniques like looping, slice triggering and much more. 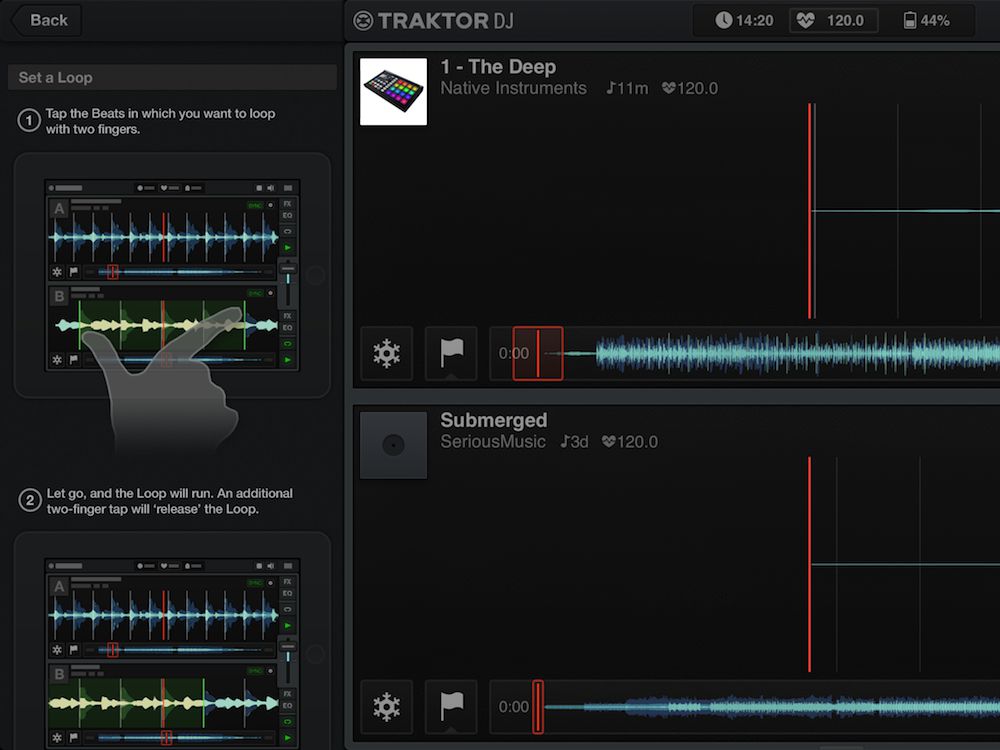 This is a practical tip: using Traktor DJ on your iPad will use a lot of battery power. This is partly because of the processing power required to analyze and stretch tracks, but actually mostly to do with the fact that when you use it, you are touching the screen a lot. With any iPad usage, even Safari, interacting with the screen a lot uses battery power much more than simply watching a video for example, when you're hardly tapping the screen at all. So if you are gigging, it's well worth plugging your iPad into a power source to prevent unexpected battery death. There is a power indicator in the app to help you monitor this.

The app is really good at guessing beats and creating beat grids to automatically synchronize tracks. But inevitably, there will be times when this doesn't quite mesh properly, maybe in the case of a track with an irregular time signature, or when the app guesses the first beat of a bar incorrectly. Tap on the beat grid adjust button just to the right of the sync icon on either deck to be able to manually reset the grid by dragging the waveform under the beat markers. Using this tool, you can correct a wrongly-analyzed grid or simply reset the first beat of the bar. The track will continue to play as you adjust, so it's not necessary to stop playback as you make corrections. There's also a tap mode here, which some people may find easier to use. 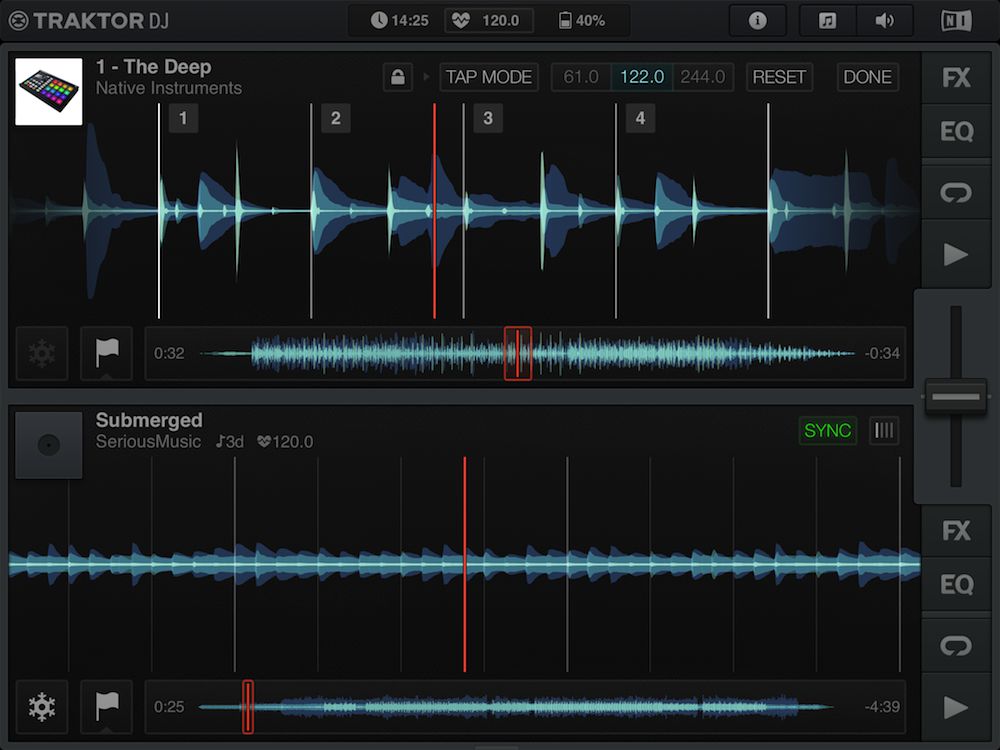 When you select a track in the browser, the app will suggest recommended tracks that may be suitable to mix with it, based on BPM. There's no substitute however for knowing your music library back to front. It's far better to know for certain what the next track is going to sound like than hoping based on its BPM that it will fit. You can create playlists and sync them between your iPad and desktop version of Traktor via Dropbox, so the two work fairly interchangeably. 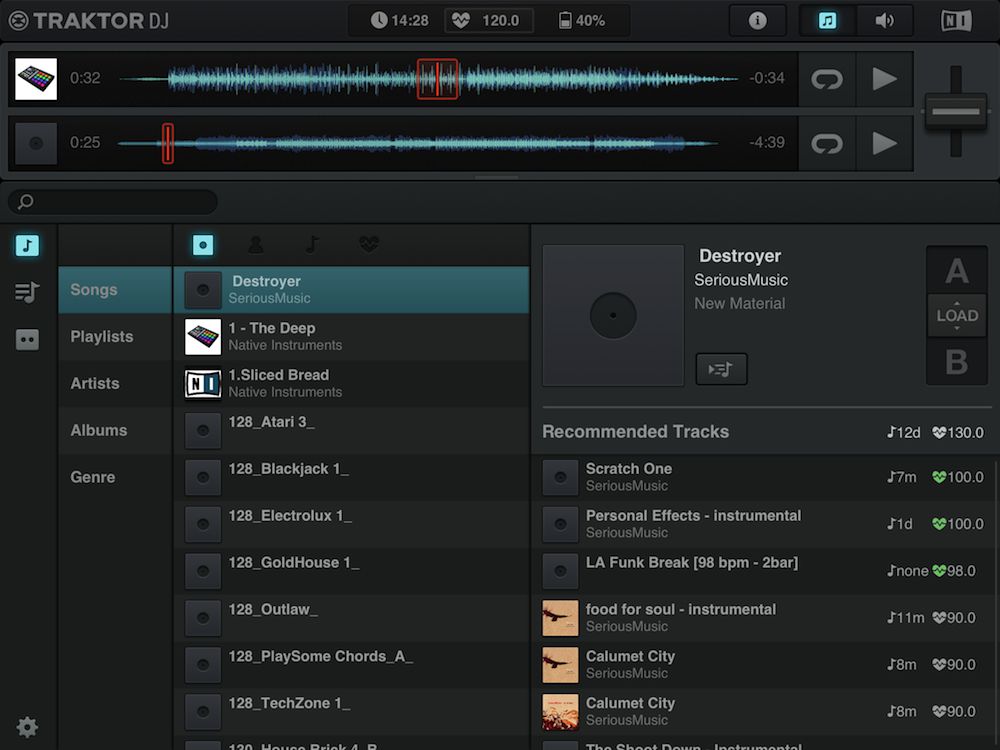 If you tap on the output selector button, you can adjust the master output as well as recording the output of the app. If you choose to split the output, you can send one signal to the audience and reserve the other for the cue mix, allowing you to audition and sync up a deck without having the crowd hear it. This works on headphones but also if you have a dedicated audio interface connected via USB using the Camera Connection Kit. Any class compliant interface should work, and will give you a more professional way to monitor, cue and manage your audio outputs. 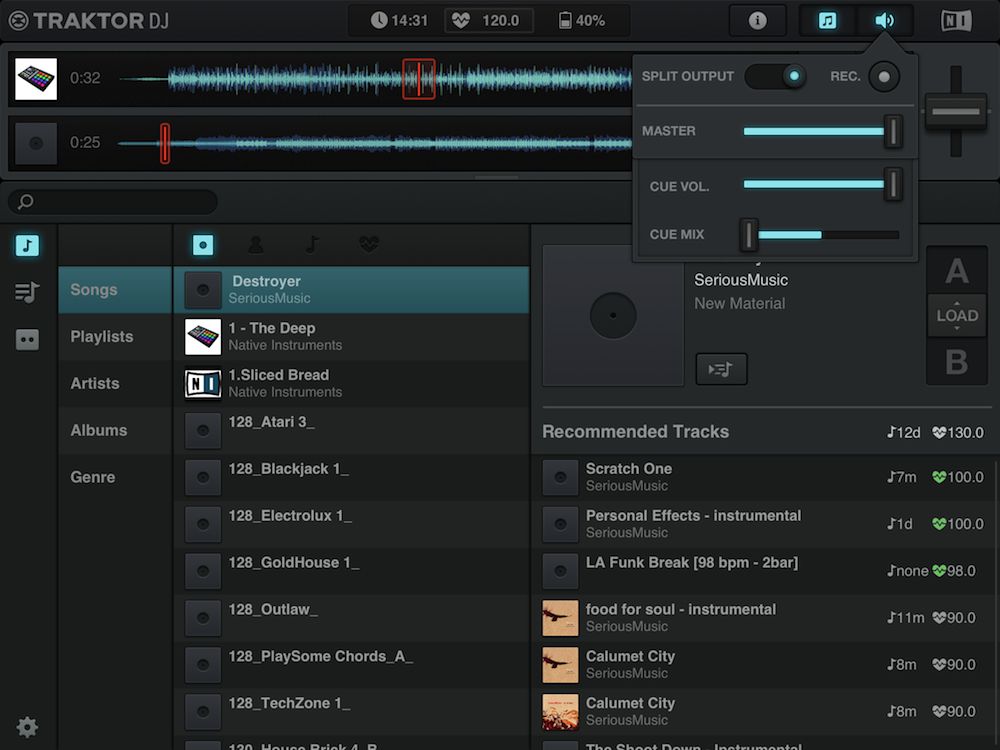 Tap on the flag icon in either deck to enter marker / hot cue mode and you are able at any point to tap and add markers to a rack. These can then be jumped to by simply tapping on the associated numbered button or cleared by using the red X button. The idea is that you can create regions and playback points that can be instantly triggered, so a track no longer has to play back in a linear fashion, it can be more organic. 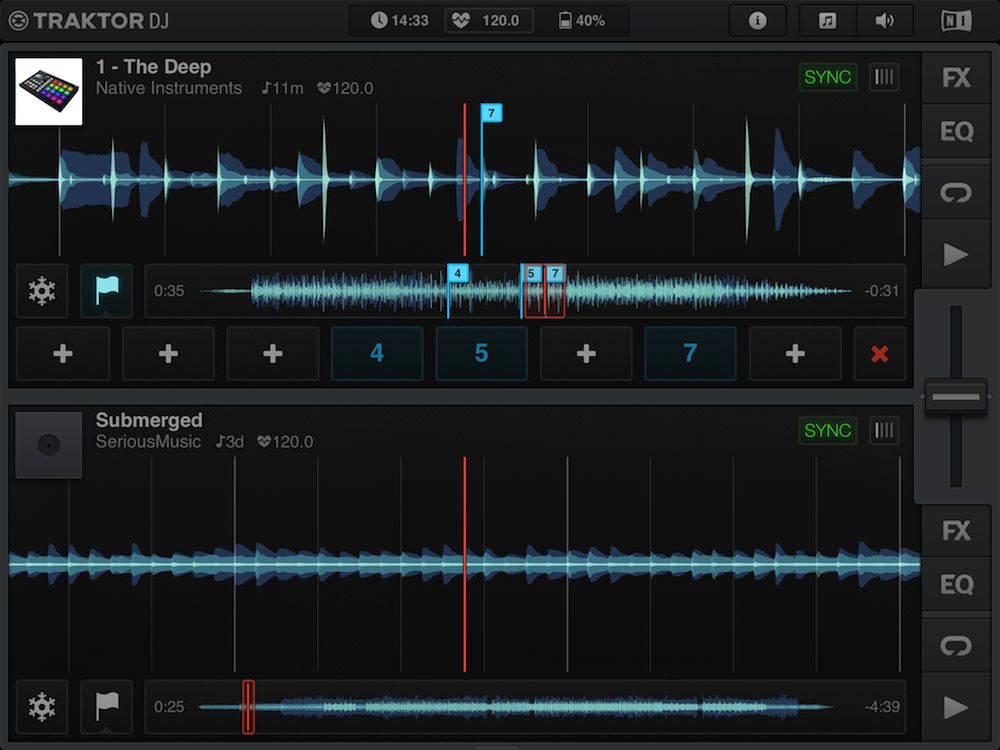 If you loop a track and then press the Freeze button, you can enter a mode where the loop will play back and tapping on any slice will trigger that slice, even as the loop continues to play. If you enter Freeze mode without first activating a loop, the track plays freely but slices can be triggered. If you enter Freeze mode without even playing back the track, your sliced audio becomes like a playable sampled instrument, triggered by finger taps. 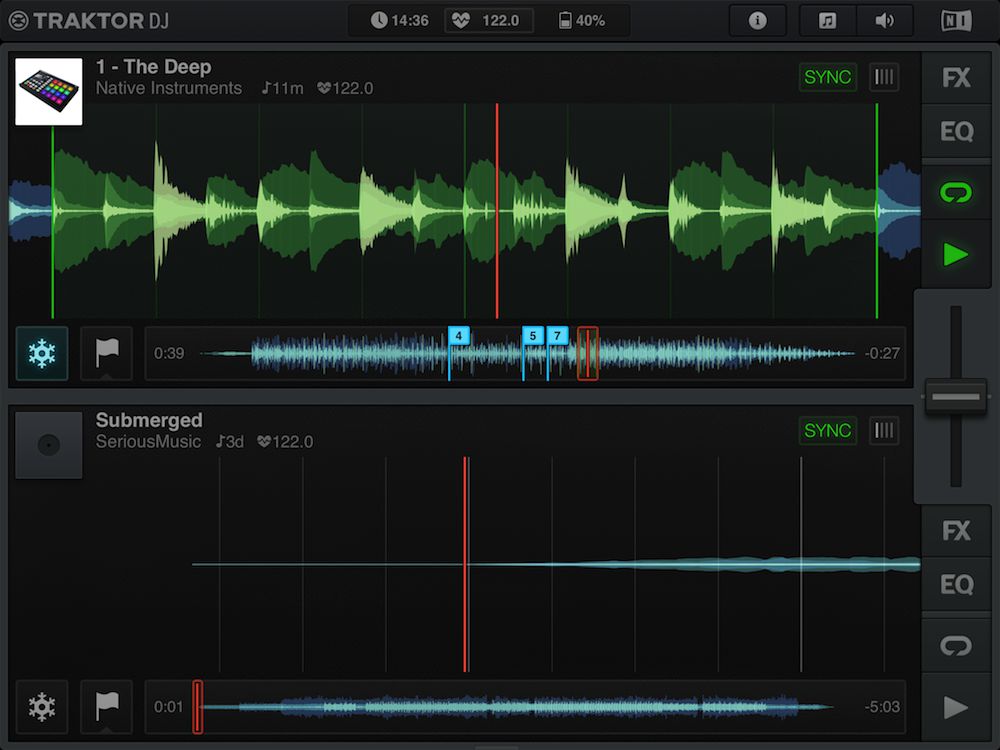 Tap on the FX button to call up the effect grid for either deck and then tap on the padlock icon. Now when you tap in the effect grid for any of the effects, it will remain switched on using whatever setting you enter. So you can punch effects in then release your finger and have them still being applied. To release them, tap the lock button again to deactivate it.

In the EQ window you can of course slide the low, mid and high sliders to change the EQ setting for each deck. But if you tap anywhere in that display you can jump the slider straight to that position. Try this with two fingers – tap in a full bass boost immediately followed by a bass cut for example, to get more creative. 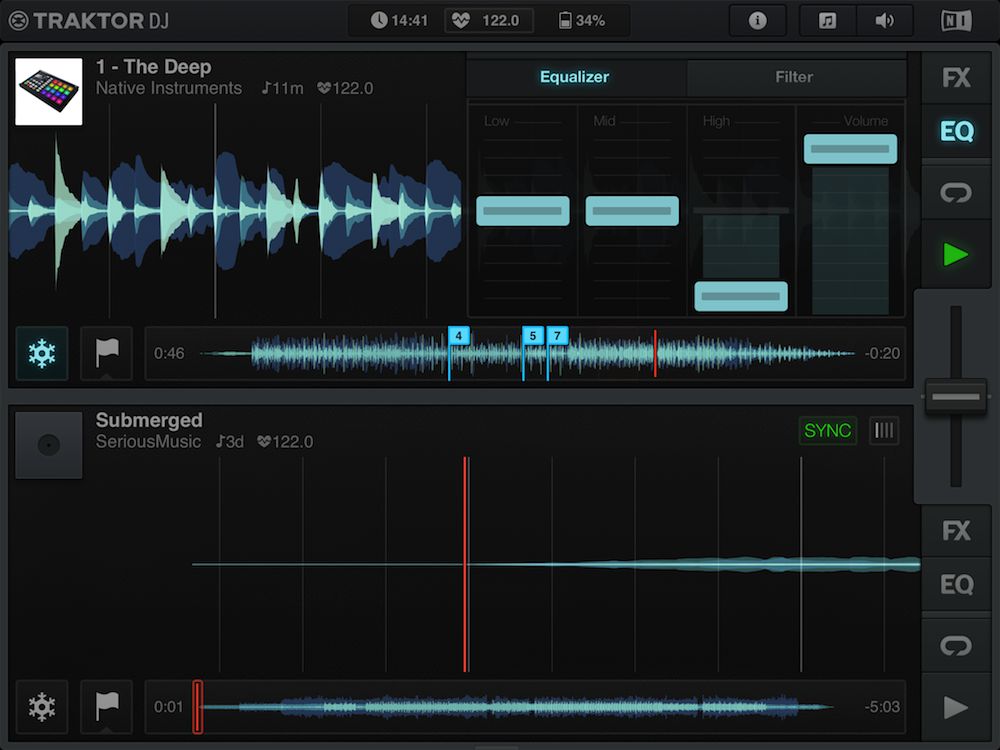 Change the default loop size by going into the preferences section and setting a loop length. You can still change loop length on the fly by using a two finger tap and then a pinch or zoom, but if for example you generally want loops to be eight bars for example, you can easily set this here. 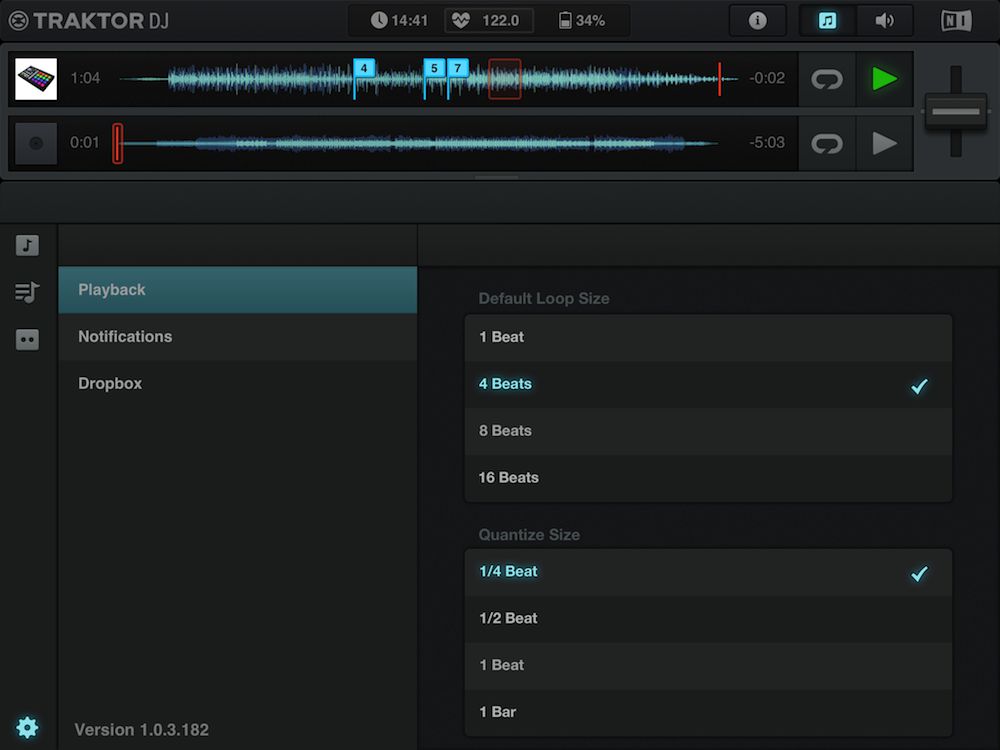 Want more? Take your DJing skills to the next level and watch Hollin Jones' Traktor DJ for iPad video course.