Language
If doesn't matter if you're a classical music theory genius or play or produce modern tunes, these classical terms could help you in a number of ways.

Picture if you will this horrifying scenario: You are at a cocktail party and the host or hostess introduces you to a group of people as a “terrific musician.” You do your best to look humble but inside you are glowing. It turns out however, that some of the others are musically knowledgeable, if not professional musicians per se’, and in the course of a music discussion they use a few terms that to your great embarrassment, you do not know. Oh, the humiliation you feel as you stand there, nodding your head and pretending that you do know.

In no particular order, here are ten classical musical terms to get you started that you can try to work into the conversation to impress them.

Once known as “the devil in music” it is a three note chord containing the interval of an augmented 4th (or flatted 5th.)  It was considered so dissonant that Mozart’s father actually threatened to disown him for using it. Nowadays it is pretty common to our ears especially since Leonard Bernstein used it extensively in the songs and score of “West Side Story.” Sometimes, just the interval itself is referred to as a tritone, although that is not really correct. See Pic 1.

This is a sequence of chords that ends a phrase, with a strong feeling of resolution. I-IV-V7-I is one of the most typical in pop music, as you see it in Pic 2.

This is a sequence of chords that ends a phrase that seems headed to a strong feeling of resolution but throws the listener a little curve. I-IV-V7-VI minor is also very common in pop music, See Pic 3.

Sounds dirty, doesn’t it? You may not think you know what this is, but you hear “counterpoint” or line against line writing all the time. The fugue is the most complex form of counterpoint. Canons are simpler. The simplest form we call a “round”, like the famous “Frere’ Jacques.” A melody comes in, it is then restated in a second voice at a later measure while the first voice continues, then still later in a third voice. Classical fugues usually have three to six voices. See Pic 4. This is simply playing a series of chords but not changing the root note under it, as I have done in Pic 5.

This is often misused when what the person really means is “concerto style”, which is very much meant to show off your chops by playing hard to play stuff. An actual concerto is simply a musical composition written for a soloist or soloists accompanied by an orchestra. While they can vary in degrees of difficulty, usually they are very demanding of the soloist because, well, showing off is kind of one of the main reasons for playing one.

In Pic 6. You can see a page from a transcription for Bb clarinet of a famous horn concerto by Mozart with a piano reduction of the orchestra part. An apoggiatura is a grace note preformed before a note that falls right on the beat, as opposed to the grace not beginning on the beat. Pic 7 is a perfect example of what it looks like. The D’s should be played just before the downbeats. See Pic .7. 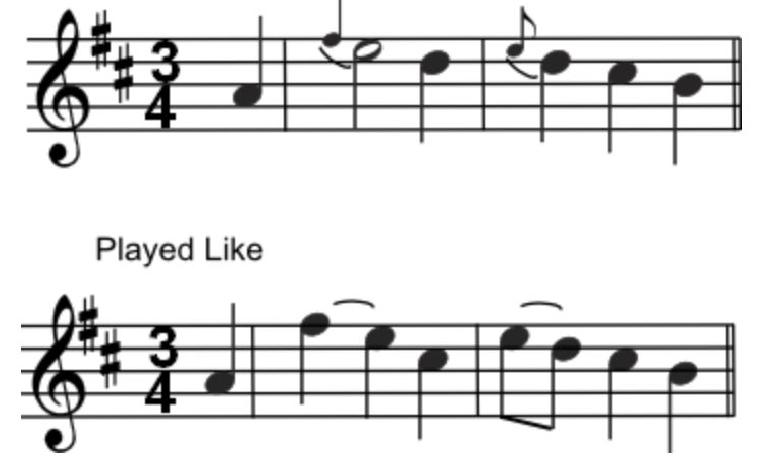 Also known as  “chance music.” It means that at least some elements are to be chosen by the player within set parameters stated by the composer. For example, I might give a flautist a set of pitches to improvise on for a certain number of measures or a certain length of time. The result is that every performance would be quite different. If you wasn’t to really impress the people at the cocktail party, tell them that John Williams composed with some aleatory in his score for the film “Images” as did Mark Snow in the “X Files: Fight For The Future” film. A section of aleatoric score might look like Pic 8. 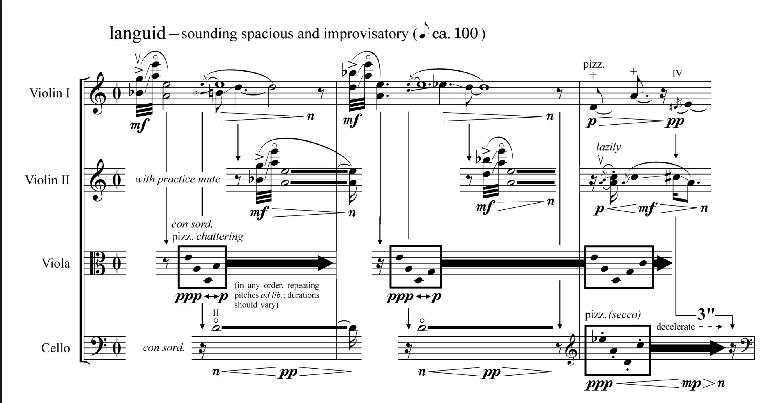 Enharmonics is simply calling the same note different names as either sharps, flats, double sharps, double flats and naturals. Usually we do this because of note’s relationship to the key or scale. In Pic 9, here is the exact same note written enharmonically three different ways.

No pic for this one, but it is a good one. Scodatura is the practice of tuning all or some strings on a  stringed instrument down or up either to play notes that are not in its range or give it a different tonal color. A great example of scodatura is with Paul McCartney’s Epiphone acoustic guitar on his most famous song,  “Yesterday.” He wanted to play it in the key of G because it had more open chords than in the key of F and therefore sounded better but it was a little high for him to sing, so he tuned it down a whole step. (On The Beatles Anthology, you can hear him telling George Harrison, “I’m playing a G but for you it will be an F.”)

OK, this one is probably not important but I like to be provocative. A castrato is a man who has the... err… family jewels removed in order to preserve the high pitches and pure timbre of a boy. If you are a male and badly want to get ahead in the business by exploiting a gimmick where there is not much competition, you could consider it. Or maybe not!

Learn music theory without sacrificing any important bodily parts in The AskAudio Academy.