2018 has been a great year for new, expanded and upgraded music-making apps on iPad, iPhone and iPod Touch. Here are some of the best, from beat makers to full DAWs. 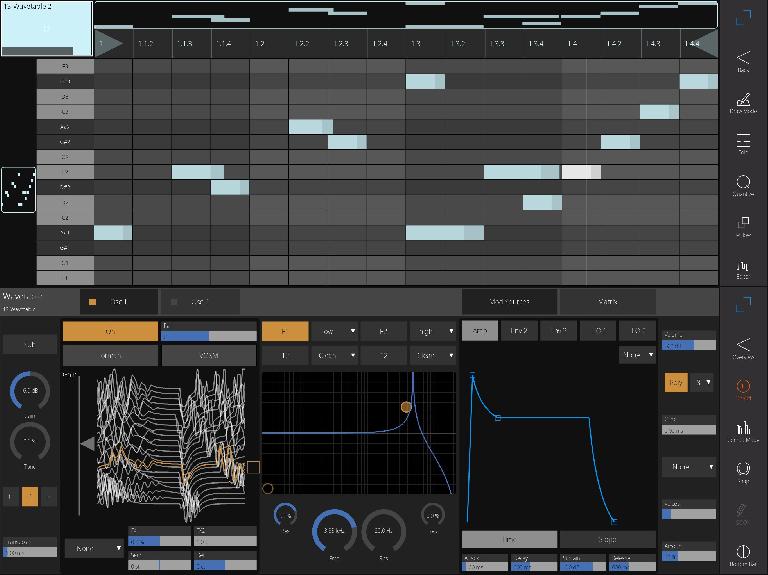 Ableton Live has always been well catered for when it comes to remote control, and touch surfaces like phones and tablets are the ideal way to do it. Zerodebug’s TouchAble Pro has been around for a while, and this year it got a major rewrite with a cleaner interface, more powerful customization and user access deeper into the software, from waveform views to editors to automation. This version added audio clip view with waveforms, including side-by-side waveform view, the ability to edit patterns easier and faster with the new piano roll view, draw and edit automations, access to a track’s I/O right from the app, custom templates and much more. 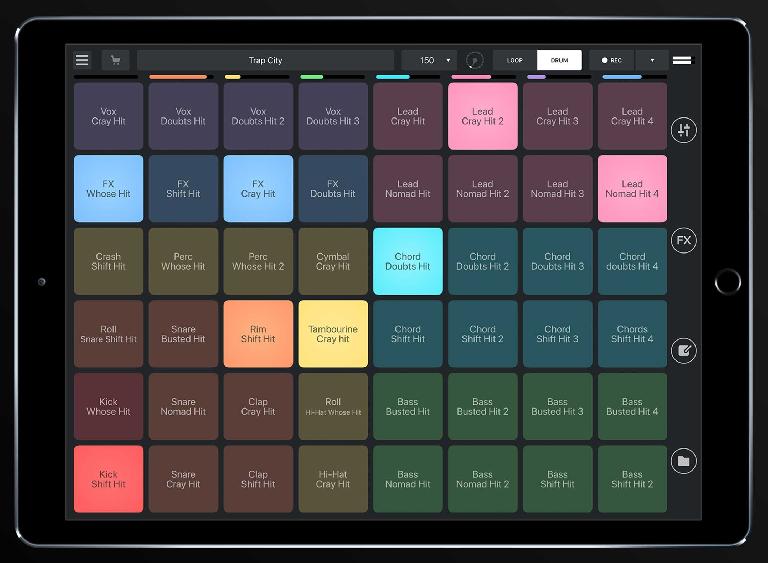 The iPad is the perfect platform for intuitive, fun looping, remixing and performance. MixVibes’ excellent RemixLive app got a big update the year, with a bunch of new features added including many sampling improvements. There’s a new detailed waveform, In/Out points with smooth Fade-in/Fade-out, snap to grid for perfect samples and loops and edit sample BPM to fit to your track’s BPM as well as the complete remixing toolbox, sampling and audio, beat repeat, finger drumming and much more. You get 24 pads on iPhone and 48 on iPad, expandable sample packs a full mixer - the list goes on! It’s a cool way to perform on your iPad. 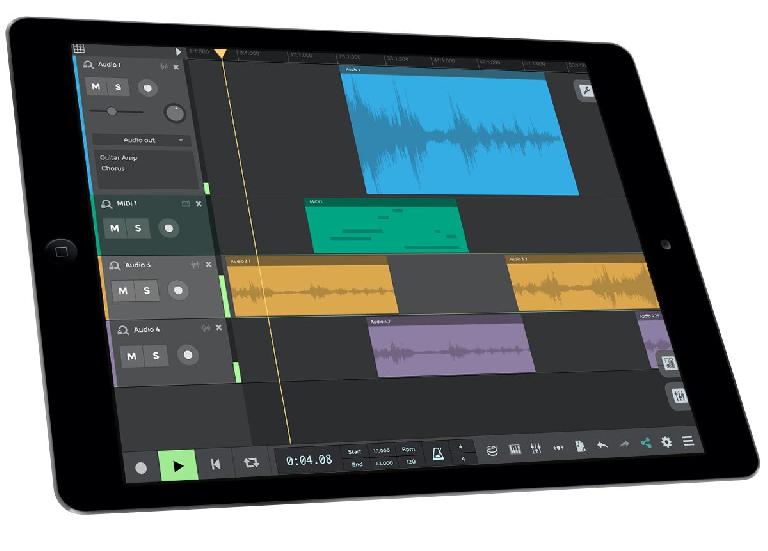 Version 9 of n-Track Studio for iPad, iPhone and iPod Touch had a complete redesign to bring it up to speed with the latest developments in iOS. Since it also exists for Mac and PC, the iOS version can export recordings in mixed down wave or even in multitrack.sng format so that you can load the multitrack projects on the desktop in editable form.

A truly capable mobile DAW, its features include recording from device built-in mic or from up to 48 audio inputs (with external audio interface) at 24 bit & 192 khz capable, recording MIDI tracks and editing them in the Piano Roll window, a built-in multi instrument MIDI synth, support for Inter-App audio and MIDI, import and export of .wav, .aif & .m4a audio files, built-in effects, grouping of channels, near-zero latency and audio copy and paste - plus many more. It’s rare to find a third party DAW that can operate and exchange project data between so many different platforms, so this one is well worth a look.

Price: The n-Track Studio 9 iOS app is available via the app store in 3 forms:

Klevgränd is one of a small number of developers making AU plug-ins for iOS, both instruments and effects, and the company often makes equivalents for the desktop as well. That’s the case with Amp Modeler, which is for iOS, Mac and PC.  REAMP is a complex spectral saturation processor, simulating a set of different analog gear. The seven models available are based on real analog gear, individually measured in two dimensions; gain responses (-inf dB to +6 dB) at the frequency spectrum 20Hz to 20kHz. This data is used to transform input audio to output audio. A four-band spectral drive and ultra low latency make it a great way to dirty up your tracks, used on everything from vocals and beats to guitars and basses.

Created by volunteers, this completely free app, which has taken years to develop, includes MIDI support (you can play it with a MIDI keyboard or controller), sequencer, vintage-inspired analog filters, expressive arpeggiators, warm analog delays, and, over 300+ presets to get you started. Plus, it’s completely open-source so you can use the code to learn how to build your own synth app or modify the app yourself, and anyone can contribute code and features. Despite being free there are no add-ons or purchases, but it has all the features you'd expect from a commercial, paid instrument.

Developed in consultation with synth techs and sound designers who have worked with M83, Rihanna, Kanye West, Owl City and other big names, it’s a hybrid analog / FM poly synth with six voices, five oscillators, a sequencer, arp, Ableton Link, ADSR envelopes, filters, FX, touch pads and a bunch of other cool features. Seriously, even for a paid app this would be an amazing instrument but as it is, you can get it today for free - so head to the link and grab it now.

The app is available to download for FREE: https://itunes.apple.com/us/app/audiokit-synth-one-synthesizer/id1371050497

A little oddly, Reason Compact isn’t a mobile version of Reason, but an iOS version of Propellerhead’s Europa synth. Slightly misleading name aside however, it’s a cool and fun synth for your iPhone or iPad, taking the essentials of the Europa synth and putting them in your pocket to enable synth programming everywhere. In its free version it is decent enough, though serious users will want to pay the £9.99 to unlock the edit sections. At least you can try them in demo mode, which is helpful. It is just the synth - no beats or layering really - but you can link it to other apps or export to the desktop for that. Considering the download is free and you can demo the advanced sections before deciding to unlock them, there’s no reason not to test drive Reason Compact today.

Yes, GarageBand has been around for a while, but on 2018 it got one of its regular updates and frankly given that it’s free for all iOS users, we felt it was worth reminding you what it can do. If you haven't installed it on your iOS device we'd highly recommend doing so. Features like Live Loops, Alchemy synth, Drummer for iOS, and Smart Instruments make GarageBand for iOS more than just a sketch pad for musical ideas. It's an excellent bridge to Logic Pro X for capturing sounds and ideas on the go.

Now since the latest iPad Pro 2018 announcements GB for iOS supports shortcuts using the smart keyboard. In order for GarageBand to be seen as a viable DAW and the iPad Pro as a viable laptop replacement, keyboard commands needed to happen sometime. Additionally, you can also use your facial expressions to control Smart Guitar on iPhone X and above! 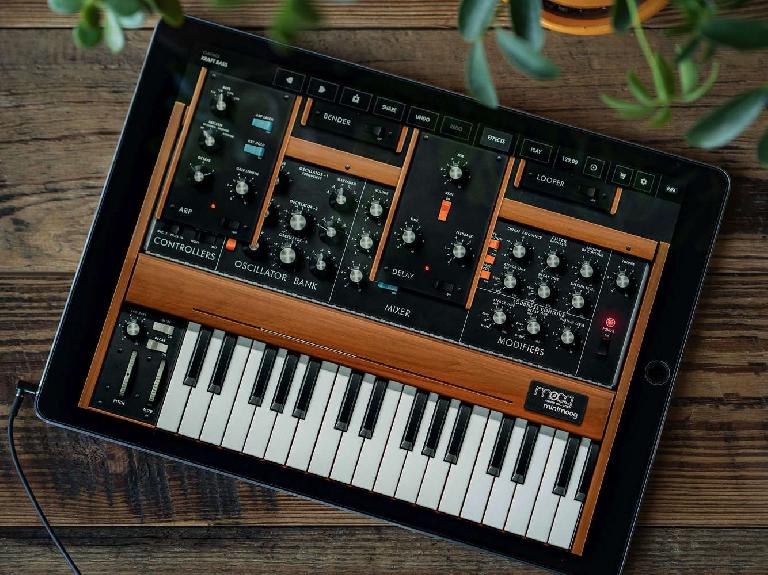 Moog has been an unlikely but welcome leader in the world of iOS instruments. For a company so strongly associated with high-end hardware you wouldn’t expect a focus on developing affordable iOS apps, but it is indeed true. Based on the original analog circuit designs of the world's first portable keyboard synthesizer, the Minimoog Model D App is a mobile version of the Minimoog Model D. Optimized for use on all 64-bit iOS devices, anyone can jump in and play with over 160 included presets or lay fingers on the controls and begin exploring vast magical realms of creative potential.

Taking full advantage of the iOS platform, the Minimoog Model D App incorporates many inspiring sound creation tools and capabilities not present on the analog version. New functions found only in the app include the ability to play chords with up to four-note polyphony, an easy-to-use arpeggiator for rhythmic pattern creation, a real time looping recorder with unlimited overdubbing capacity, a tempo-synchronizable stereo ping pong delay module, and the Bender - a wide-range stereo time modulation effect module. 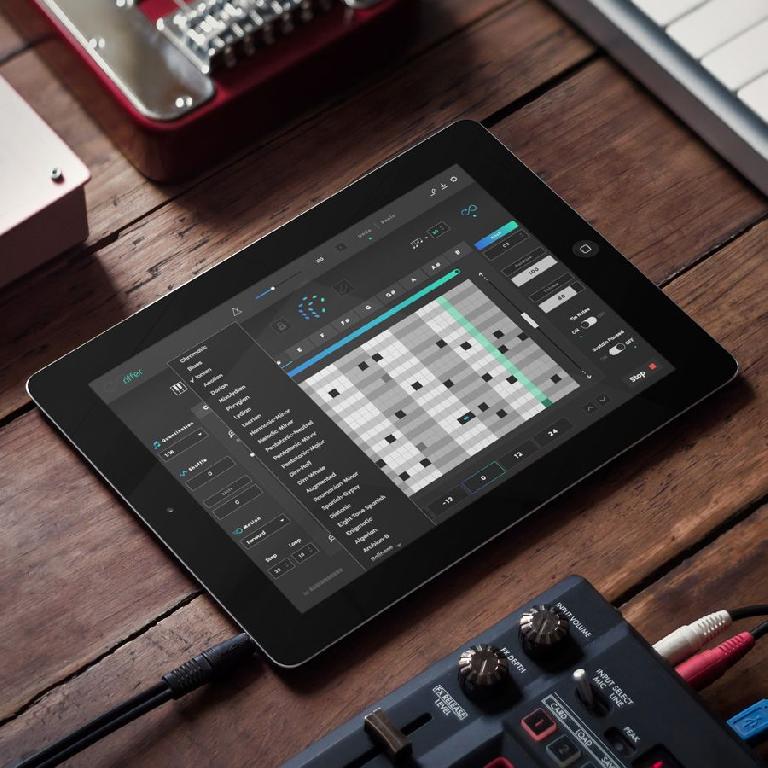 Riffer from Audiomodern is a smart MIDI tool that generates random riffs for your sounds, both in software and hardware. Designed to feed anything that accepts MIDI signal it lets you choose from 50+ scales, choose pattern complexity, steps, start and end points, set pitch, transpose, motion, measures and much more. Generate fresh ideas, sequences, melodies, riffs and musical patterns. Turn them into something of your own or let it run endlessly using the inﬁnity mode.

Use it to generate random riffs and feed these to your mobile DAW or any other software or hardware that can accept MIDI input, over Wi-Fi or CoreMIDI. iOS with its touch interface is the perfect system for creating MIDI patterns, and an innovative sequencer like Riffer can help you go beyond the basics and create some true mind blowing MIDI sequences both on your iOS device and on the desktop. 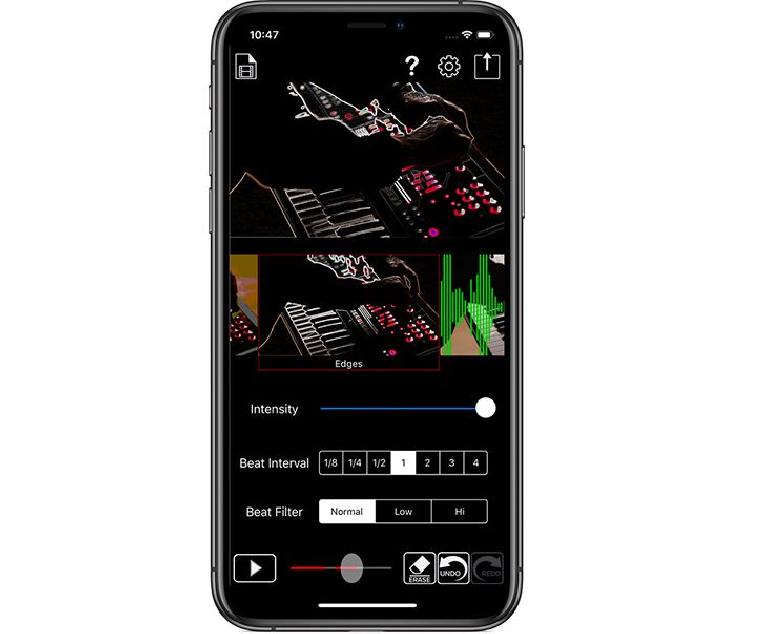 Aimed at the modern beat maker, Beat Sync Maker for iOS enables users to pump up their EDM/DJ performance videos with pro beat-synced visual effects.  Beat Sync Maker automatically detects the beats in a performance and adds all sorts of custom video effects that stay in perfect time with the music. Going further, users can also drop in movie clips from their device with the app’s 2-Video Mix function. Via a simple and creative process, users are able to transform a video in minutes, save it to their device, and post it to social media. With Beat Sync Maker, it has never been easier to bring a professional touch to EDM and DJ performance videos.

The app automatically detects the beats in music videos and allows you to sync video effects to those beats, with multiple FX available, 2-video mixing, depth control and full video export available after an in-app purchase. These kinds of apps are still relatively specialised, but the increasing power of modern iOS devices means that VJ’ing is now more accessible than ever, so check it out today via the free download.

Learn much more about making music with iOS with hundreds of hours of pro video tutorials: https://ask.audio/academy?nleloc=new-releases